Sony must become more transparent and less restrictive with its sub ≈US$5k cameras.

Sony is among the last among camera manufacturers which disguises and/or restricts framerates. Sony even treats camera purchasers who spend less than ≈US$5k differently than those who spend more, since cameras under about that amount unfortunately round non-integer rates in menus to the closest integer in menus and display, implying that they offer exact 24 fps when they don’t in these models. Fortunately, cameras like Blackmagic, some Canon, Panasonic and at least one Sigma now show non-integer rates to two decimals and offer both 23.976 (displayed as 23.98) in addition to exact 24 in models well under US$5k, since there are times when producers need one or the other. Despite naysayers and Internet trolls, the difference indeed matters. Even though I have explained this difference in the past, I’ll recap it and give you examples to indicate when one of the two is required. I’ll also clarify why the exact 30 fps rate disappeared in 1953 and was superseded by 29.97. I’ll quote a user who has publicly expressed his frustration with Sony about this situation.

Sony framerates and limitations in menus

From my observations, under about US$5k, Sony still rounds all non-integer framerates to the closest integer and imposes other limitations as follows: 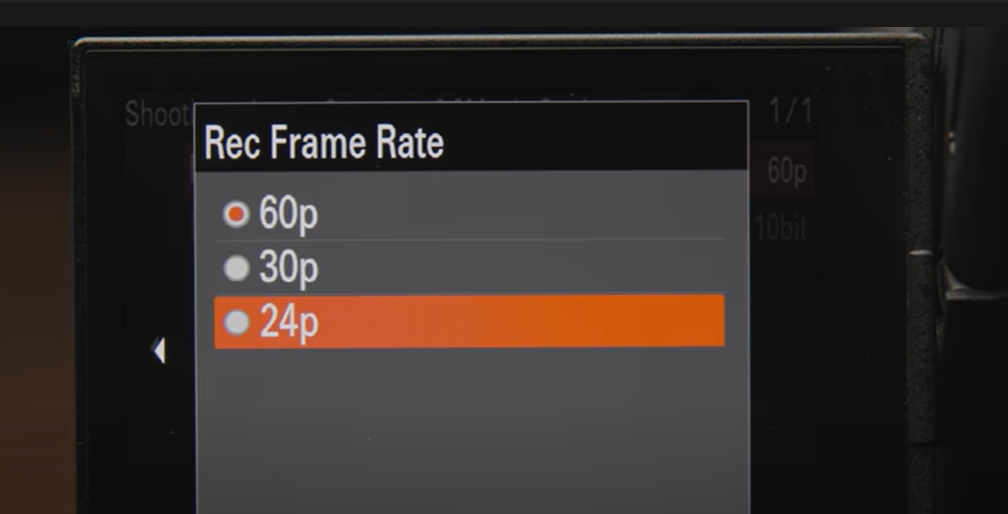 Please note that with some Sony camera models, changing from the NTSC-derived mode to the PAL-derived mode will require rebooting the camera and in some cases will also format (erase) the memory card. So if your Sony camera does this and you must shoot among both, be sure to have memory cards reserved for each mode and remove the current memory card before shifting. After changing to the PAL-derived mode, the rates shown (25, 50 and possibly more) will be proper integers since PAL fortunately never had to resort to non-integer rates.

Some Canon, nearly all Panasonic Lumix and at least one Sigma well under US$5k fortunately offer all standard rates without rounding to the closest integer in the menus: 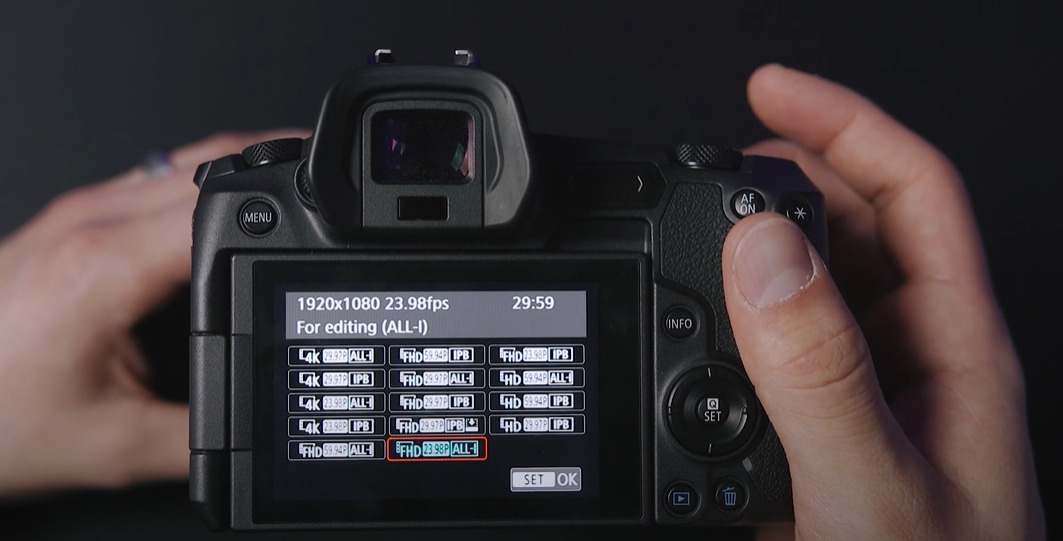 Above, you’ll see how the Canon EOS R shows 23.976 in the menu, rounded to 23.98 but fortunately not to “24”. That frame grab is courtesy of Tyler Herrinton’s video here. On the other hand, below you will see that the same Canon EOS R offers exact 24, thanks to this screenshot courtesy of Chris Spiegl’s video here: 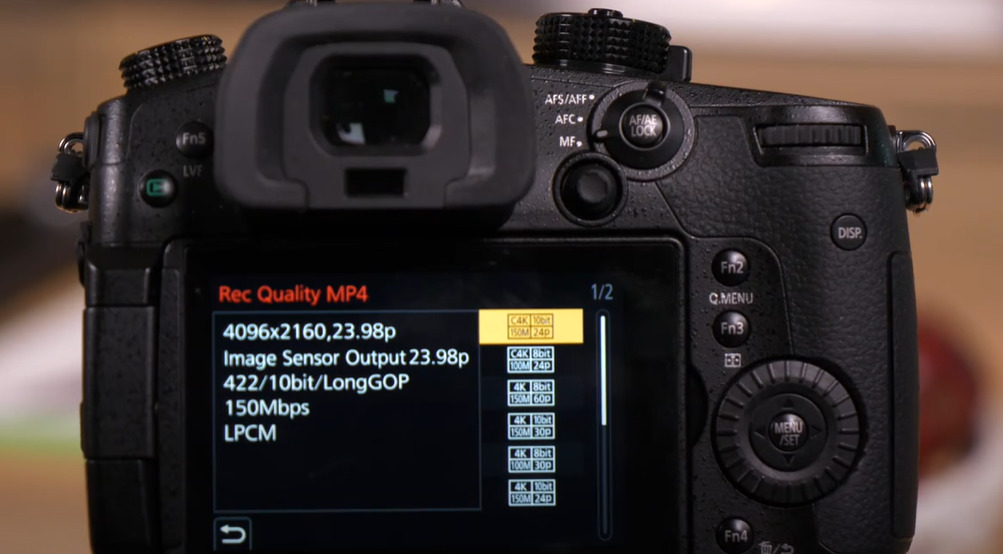 Above, you’ll see how the Panasonic Lumix shows 23.976 in the menu, rounded to 23.98 but fortunately not to “24”. This screenshot is courtesy of Panasonic’s own video here. 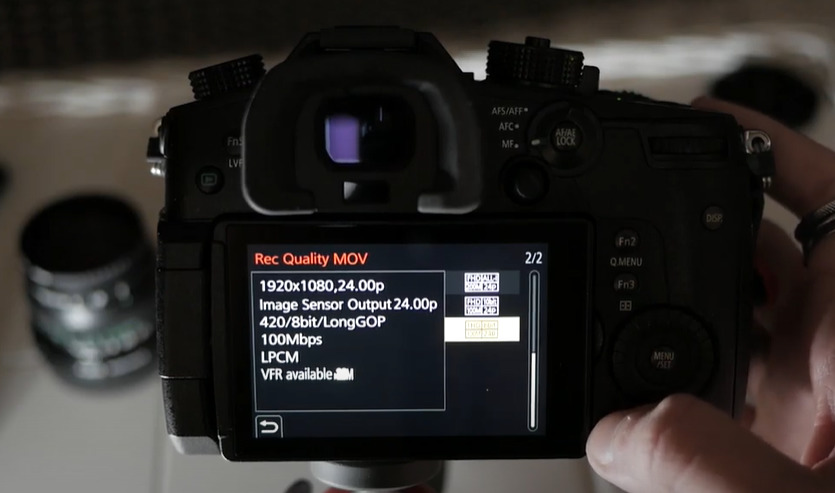 After the Panasonic Lumix’s System Frequency is set to 24 Hz, then it indeed offers 24.00 fps and really means it, without any rounding. This frame grab is courtesy of JustAlex Himself’s video here.

Sigma makes it even simpler: 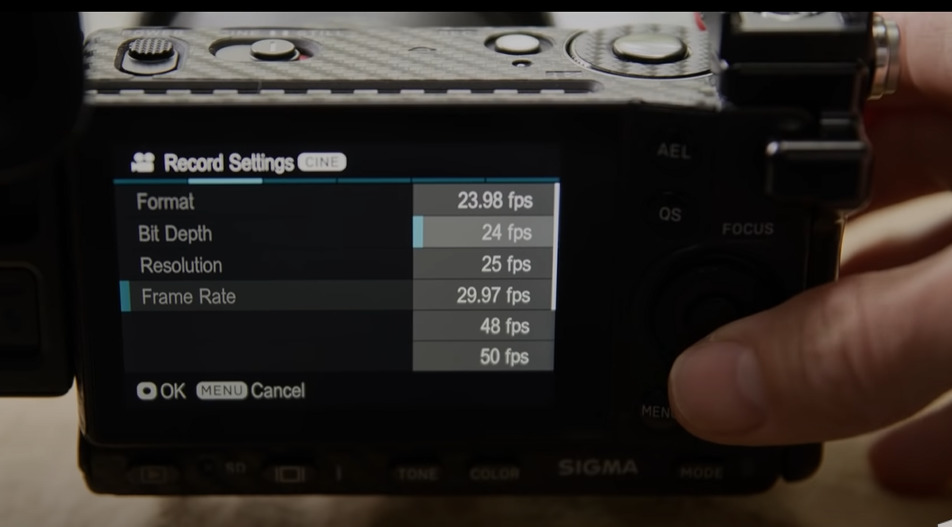 Unlike Canon, Panasonic Lumix or Sony, the Sigma FP can cover all the rates without having to switch the clock first, let alone reformat the memory card. This screenshot is courtesy of this video from Justin Philup. 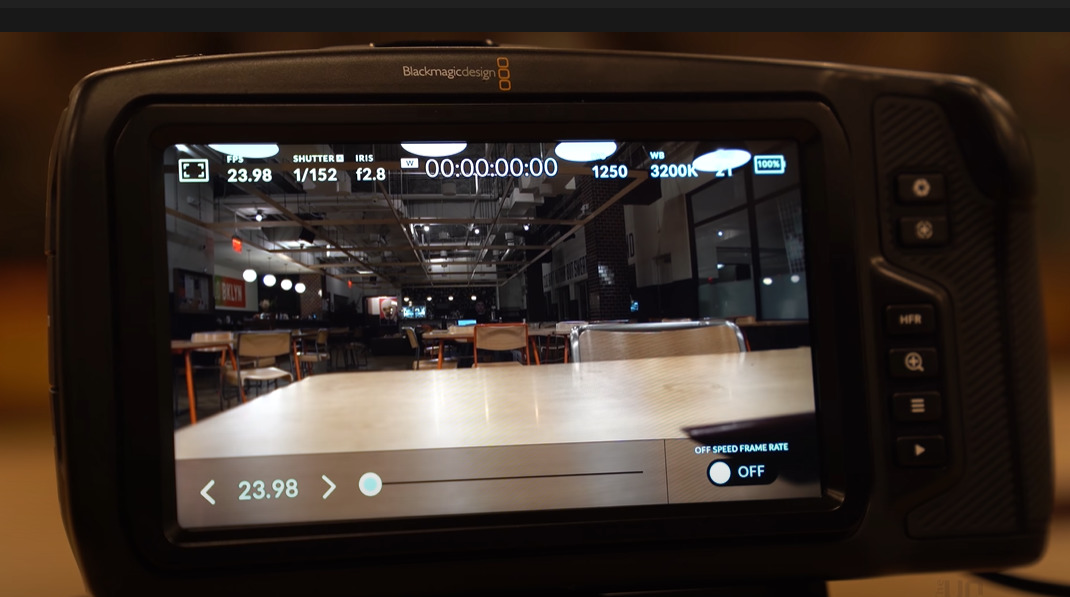 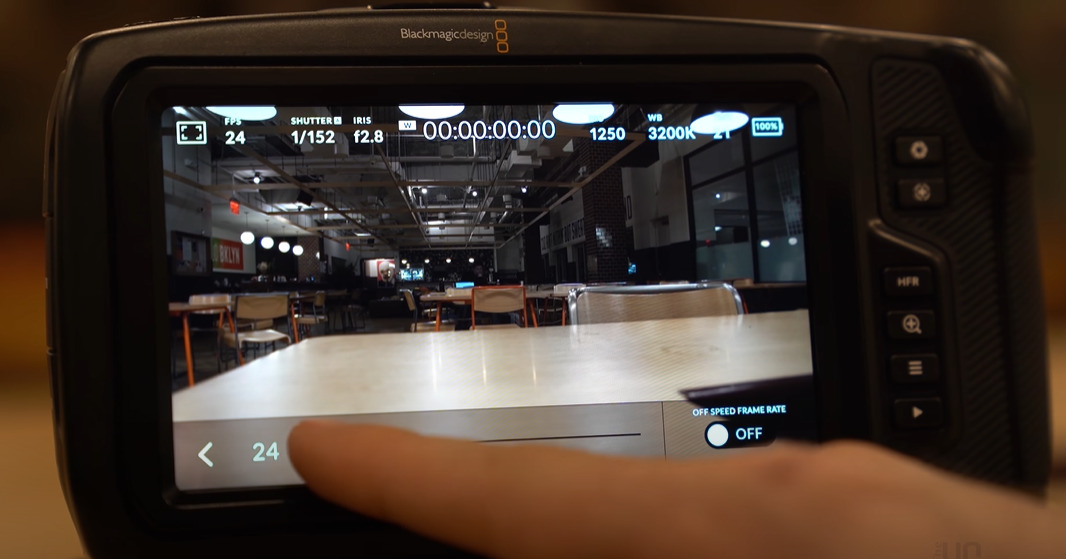 Blackmagic cameras have all of the rates offered by Canon, Panasonic Lumix and Sigma as indicated in the prior section plus (in some cameras, but not all) the now non-standard exact 30 and exact 60 fps (non-standard for broadcast since before 1953). Of course, I know that exact 60 fps has become a standard for gamers (likely due to a misunderstanding caused by some innocent engineer who read a 59.94 spec which was deceptively rounded to “60”). Why does Blackmagic offer these two non-standard rates in addition to the standard ones? I speculate that Blackmagic offers exact 60 fps for gamers and  just in case someone needs to create video and later time-travel to before 1953. Of course, that would be grayscale (monochrome), where the camera is set to image exact 60 fps and then the image is converted to exactly 30 interlaced frames per second with exactly 60 fields per second. The image would also need to be center cut to be 4:3 or letterboxed. Now only if the time travel part were that easy…

An individual named Ayawolf (whom I don’t know personally) posted the the following question on the DPreview forum:

Given the sad reality that the Internet is full of trolls and naysayers (in addition to many good people too), Ayawolf’s first response was nasty and attempted to belittle his important question:

Of course, if you have read the rest of this article up until now, you already know the answer. In fact, later in that thread, someone informs Ayawolf that the supposed “24” in this camera is actually 23.976 as read in the metadata in a professional software app, and Ayawolf really needed the exact 24 fps for her/his particular situation.

Other than this cruel framerate policy, Sony manufactures great cameras. It is sad that —so far— Sony has been crippling itself with limitations and lack of transparency regarding framerates. Of course, it is possible to convert 23.976 fps to 24 fps or 24 fps to 23.976 fps in post. However, that is time consuming and much more complicated. Everything is smoother when cameras actually disclose what they can truly deliver… and when they offer all desired rates (when the hardware allows), the way Sony’s competitors have been doing for a long time in many of their cameras in the same price bracket. In the past, Sony has taken our voice into account and added capabilities via a firmware update. Let’s hope that happens again. If and when Sony offers a firmware update to solve this mess, I’ll certainly write about it to celebrate, as I have done in the past.

Some of the manufacturers listed above have contracted Tépper and/or TecnoTur LLC to carry out consulting and/or translations/localizations/transcreations.  Many of the above manufacturers have sent review units to Allan Tépper so he can do his reviews. So far, none of the manufacturers listed above is/are sponsors of the TecnoTur, BeyondPodcasting, CapicúaFM or TuSaludSecreta programs, although they are welcome to do so, and some are, may be (or may have been) sponsors of ProVideo Coalition magazine. Some links to third parties listed in this article and/or on this web page may indirectly benefit TecnoTur LLC via affiliate programs. Allan Tépper’s opinions are his own. Allan Tépper is not liable for misuse or misunderstanding of information he shares.

The Sony ZV-1 camera/camcorder/streamcorder is quite intriguing and has been covered in many reviews by many tech journalists. However,...