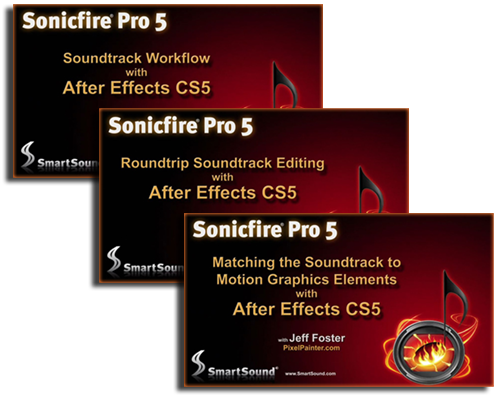 In this tutorial, I show how quick and easy it is to select a soundtrack library in Sonicfire Pro 5 and adapt it to my short project I’ve created in After Effects CS5. By rendering out a low-res version of my project Comp from After Effects, I can import it into Sonicfire Pro 5 and do all of my soundtrack editing to match the video ques without having to go back and forth between the two apps or wait for long RAM previews to test the edits. Sonicfire Pro 5 also uses smart “Mood Mapping” technology that adjusts not only the volume of tracks along the timeline, but also drops out instrumentation as needed for sections of dialog or voice over. Any updates to an AIF file that is created by Sonicfire Pro 5 that you import into your After Effects project, can be re-edited again in Sonicfire Pro 5 with all the track editing data retained. This is truly a smart and efficient workflow!

I cover editing the soundtrack in this video, by using the “Edit Original” option in After Effects, which launches Sonicfire Pro 5 and a new project file is created with all of the original track data still intact from the AIF file. Inside Soncifire Pro 5, I can now split the soundtrack into two sections and it will automatically recreate the end point of the first track while I add a new track that will give the second half of the video a different feel. Since it also recalled the low-res video I used to create the original soundtrack with, it’s easy to see the edit points. All of the editing is done in Sonicfire Pro 5 and the finished AIF is then saved-over the original file so it’s automatically linked back into the After Effects project.

In this tutorial, I show how I use Sonicfire Pro 5 to create an energetic soundtrack for this reality TV show opener/bumper that I created in After Effects CS5. All of my animation sequences are done but I need to set them to the timing of the music soundtrack I create. Using Sonicfire Pro 5 I can not only get the exact soundtrack I need to fit the 13 second long project, but I can customize it to contain exactly what sections of the soundtrack elements I want along the timeline and show you how to use the blocks from the bin to work in a “Garage Band” style of production – though it’s not necessary if you’re not musically-inclined. I also include hit files to enhance my production and it all comes together quickly and efficiently in this workflow.

I hope these tutorials help you understand the different workflows between these two programs and encourage you to experiment with what works best for you.
I’m open to any questions you might have by contacting me through my web site: PixelPainter.com