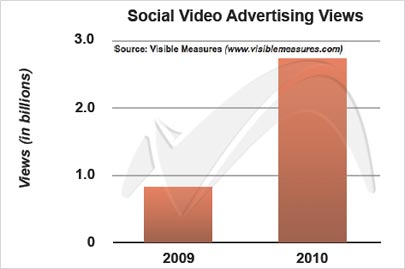 Indeed, categories that produced millions of views in 2009 generated hundreds of millions in 2010, while the number of active brands in social video advertising more than doubled.

In particular, campaigns like Old Spice’s The Man Your Man Could Smell Like, Nike’s Write the Future, and Pepsi’s Oh Africa captured the attention of audiences across the world.

Overall, the number of brands participating in social video advertising exploded. In 2009, fewer than 450 brands launched social video ad campaigns, while that number more than doubled this year to reach nearly 1,000 brands.