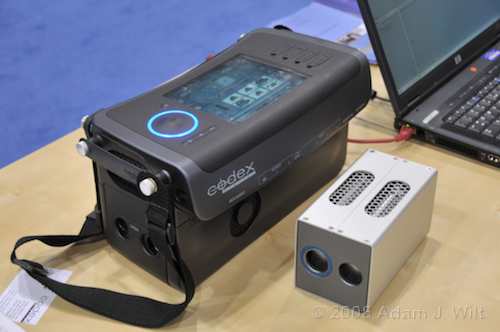 Highlights of my walking around the show floor on Tuesday…

Codex Digital showed working versions of their Portable digital cine recorder. $44K gets you the lunchbox plus a three-hour drive pack, and the superb Codex user interface. 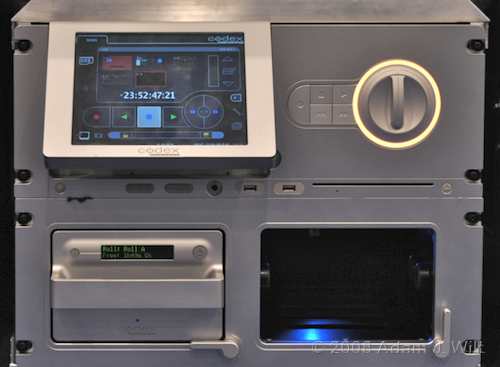 The original Codex Digital recorder with one field pack removed

These full-size Codex recorders were used to capture Sony F23 clips on the set of “Speed Racer”, the Wachowski Bros live-action/CGI reprise of the Japanese cartoon. 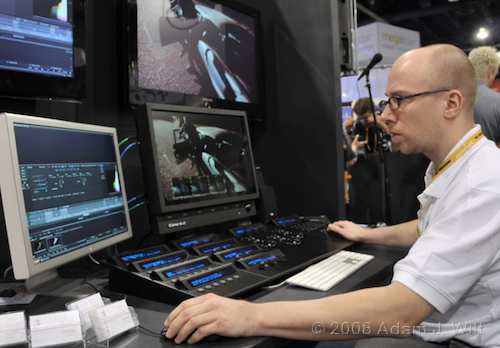 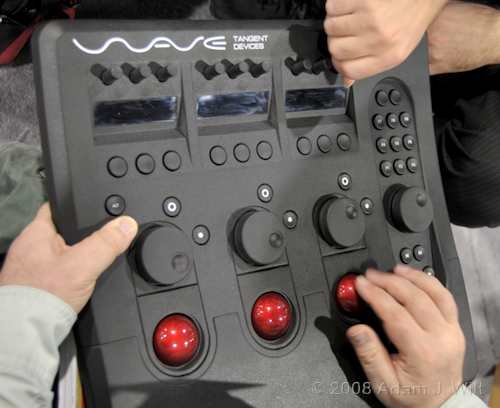 If $20,000 seems too spendy for a colorist’s console, Tangent will be offering the Wave for around $1,000. It’s really designed for field use with SpeedGrade OnSet, but I can see a lot of them going into fixed installations as a cost-effective control surface.

Cineform demoed full metadata persistence through editorial, with shot metadata now embedded in the essence instead of merely being kept in file headers where it was subject to loss due to subclip extraction or format transcoding (AVI to QuickTime, for example). Basic (primary) grading can be done directly in the PC or Mac decoding plugin, bypassing the Premiere or FCP effects architecture and the need to re-render. Looks can be exported and imported on a per-clip basis, and a behind-the-scenes database tracks moved or recaptured clips via GUIDs, so looks stay associated with clips despite various file-level insults.

Next: SI2K, and Nila LED lighting… 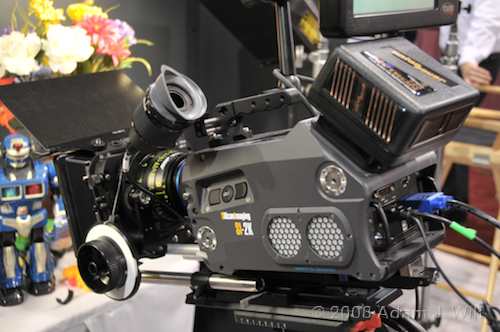 The SI2K (in its new, P+S Technik-designed bodywork) is a cost-effective ($16K if I recall correctly, but don’t hold me to that), 16mm-sized, single-sensor, 2K CMOS cine camera, using Windows XP as its core OS and Cineform RAW recording. RED gets all the buzz, but SI has also been delivering a solid digital cine camera, and in many ways SI is a more open, user- (and developer-)friendly system. 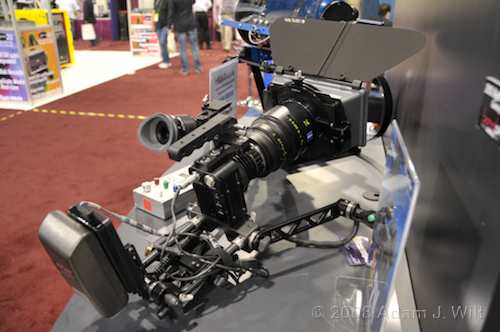 SI also offers the Mini, with the same sensor and PL lens mount but with all the other guts removed to the far end of a cable. Yes, there’s a camera nestled in this rig; it’s smaller than the RED Scarlet. SI2K Minis are favorites of 3D filmmakers and others needing compact 2K imaging. 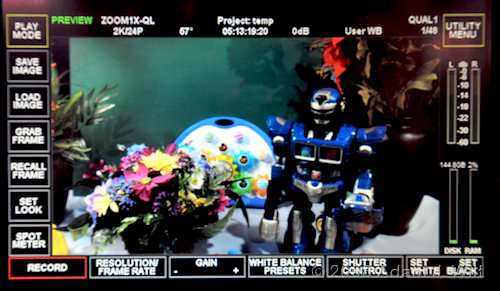 SI’s user interface is an information-rich, touchscreen-driven LCD. Nothing intrudes on the active image yet all important controls are only a tap or two away. 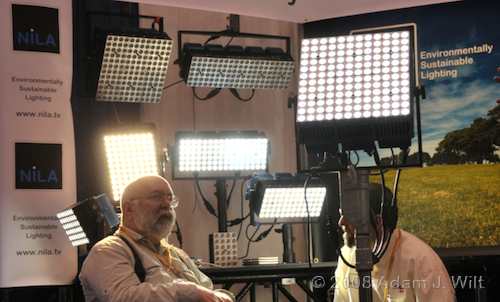 Nila was one of several serious LED lighting vendors present; I spent much of the day staring into LED lighting arrays and then stumbling around cursing the resulting temporary blindness. The Nilas claim environmental friendliness (long life, low power consumption) and high brightness— the grid at the upper right, comprised of six basic Nila “bricks”, drew 3 amps @120V and threw off about 1200W of tungsten-equivalent light, and was casting a pool of light on the Central Hall’s ceiling! One Nila brick runs about $1800, or $300 with a full set of focusing lenses, yoke, etc. Both tungsten-replacement and daylight-balanced bricks can be had.

Of course, Lite Panels was showing similarly tasty instruments with roughly comparable prices and performances, and Zylight offers a couple of small LED fixtures with fully tweakable colors (even using wireless networking to updated multiple fixtures from one light’s controls). The new Kelvin Tile from Element Labs, sold by Kino-Flo, also provides color tweakability. Even Prompter People has LED fixtures… I photographed Nila, but that doesn’t mean there aren’t others with compelling products; one of the many messages I take away from this NAB is that LED lighting has truly arrived, big-time.

But there’s more than LED lighting; we spent time looking at Kino Flo and Mole-Richardson BIAX fluorescents, and Dedolights—probably the most elegant and precise incandescent fixtures around, though with prices to match. And I still have to go by Arri and look at their ceramic lighting. 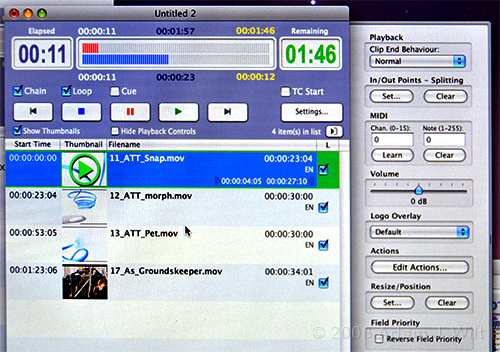