The Swatch Freeride World Tour by The North Face (FWT) is the top big mountain freeskiing and snowboarding tour in the world. FWT doesn’t deal with artificial jumps and groomed slopes. Athletes use the entire slope, including overhangs and cliff-faces, choosing their own path down the…

The Freeride World Tour (FWT) is the top big mountain freeskiing and snowboarding tour in the world. FWT doesn’t deal with artificial jumps and groomed slopes. Athletes use the entire slope, including overhangs and cliff-faces, choosing their own path down the mountain while demonstrating control and technique through fluid movements and jumps. The mountains don’t just up the action for the athletes; they also challenge the event photographers and cinematographers. David Arnaud, the producer who has been in charge of the television and video production on FWT since 2009, along with Editor Aurelie Monod and a crew of up to 35 people, work in extremely challenging conditions to bring the excitement of FWT to viewers. 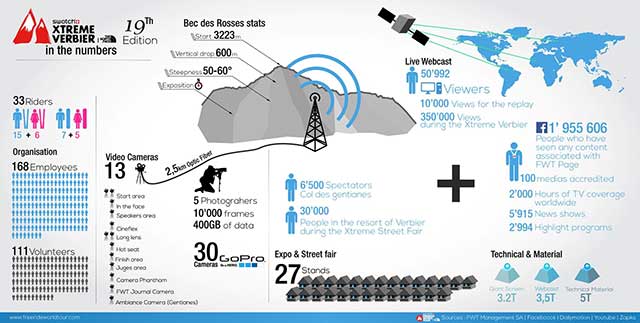 Adobe: Tell us about the Freeride World Tour.
Arnaud: As the name suggests, in freeriding the skiers and snowboarders are completely free to pick the line they like best. The competition venue basically consists of a starting gate, generally located on top of a mountain, and a finish line some 400m to 800m lower. Between these two landmarks, the riders are 100% free to pick the line that most inspires them, and is likely to inspire the judges too!

The venues are left completely untouched until competition day. Indeed, we generally close access to competition venues a few weeks before a contest to make sure that riders can find the best possible snow and fresh powder. Competitors are not allowed to ski a venue before the contest; they can only inspect it visually, with binoculars and high definition photos provided by the organizers.

FWT14 – The Best-Of from the stop in Chamonix… by FreerideWorldTourTV

Adobe: Why is this a great event for skiers and snowboarders?
Arnaud: The sport of freeriding gives athletes unparalleled freedom in the way they can express themselves. First of all, riders can pick their own line, so they literally design their own course based on the features available, quality of snow, and of course their own skills. On top of that they’re free to ride their line in their own style. Some may charge down aggressively in extremely steep sections of the mountain, while others may go for more playful runs with freestyle moves thrown in. The scoring system is designed to welcome and encourage this diversity, and ultimately reflect and drive the progression of the sport. 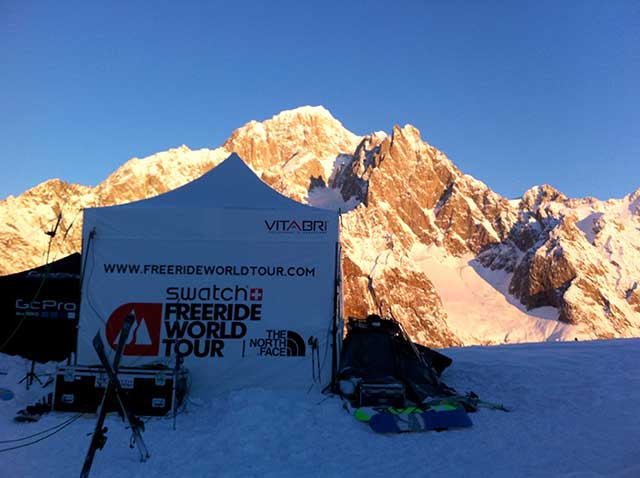 Adobe: What are some of the challenges of producing content for this type of event?
Arnaud: Our biggest challenge is to adapt to the race director’s choice of venue and deploy our live production setup in a matter of hours, in very harsh conditions. The FWT is focused on providing its athletes with the very best mountains and snow conditions available in a given destination, which can involve confirming venues as late as 48 hours before a competition. This may sound like a lot of time, but in the backcountry, in winter, this means 12 to 16 hours of effective daylight in total, with difficult access on skis and occasionally by helicopter, cold temperatures, wind, humidity, deep snow, and zero pre-existing infrastructure. To put up a production tent with all the facilities required for a live production, in such a reduced timeframe and such an environment is an unparalleled challenge. 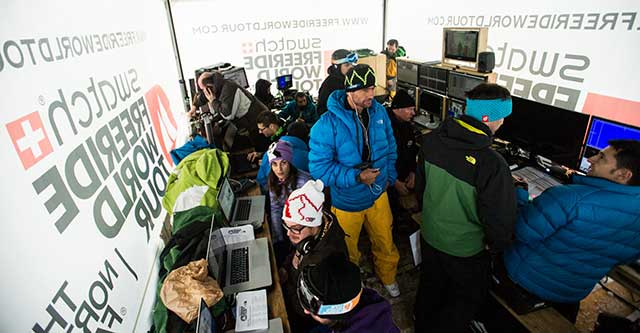 Adobe: How is the event challenging from a shooting perspective?
Arnaud: There is no predefined track or course, and the terrain available is so large, we have to use a mix of intuition, interaction with riders and judges, and experience to guess where to point our cameras. We use 10 to 13 cameras on a typical competition day. On top of that we also equip riders with GoPros, and we occasionally have a Phantom onsite to produce incredible slow motion footage.

Adobe: Why did FWT make the switch to Premiere Pro?
Monod: I met David at a Red Bull event, and he asked me to join the FWT team and improve the workflow. I’m an editor and a camera operator, but I’m also a trainer, so I have a strong practical as well as technical background. The focus was on implementing a shared storage solution. When I looked at what the FWT team was doing, I decided that Premiere Pro would also be a strong addition to the workflow.

Adobe Premiere Pro CC is easy to learn and performs well even in our light, mobile environment. But for me, the key was speed. With Premiere Pro, we don’t need to transcode video before we edit it, which saves us a lot of time when we’re working with so many different types of video. I’m very familiar with other software options, and I knew that we could only achieve top editing speed with Premiere Pro. 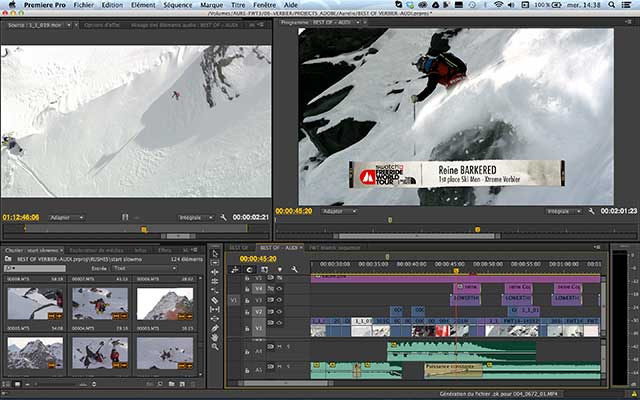 Arnaud: We had two main issues in the past. To transfer and copy footage for several editors was the most time-consuming aspect of all, until we finally found an Ethernet-based storage solution small enough to be carried in a skier’s backpack to the live production tent, and back. This has been a game-changer.

Some of my editors were using NLE’s that simply weren’t able to deal with four or five different media or codecs simultaneously on a single timeline. In my opinion, transcoding media wasn’t an option for timing and storage reasons. It was essential that the entire season content fit onto our shared storage solution, so we couldn’t bloat it with transcoded or rendered files. Adobe Creative Cloud was the best solution for its timeline performance, universality on Mac and PC, and because everyone in the team had worked with Adobe Premiere Pro at some point in their careers. Bringing everybody up-to-date with the newest version of the software was fairly quick and easy.

Adobe: What does the new workflow look like?
Monod: The new workflow is very connected and collaborative. Rather than everyone working on separate drives, we are all connected to a shared server so that we can access and edit footage at the same time. During the competition, we used BlackMagic tools to ingest the live feeds and then edited sports highlights in Premiere Pro. At the end of the race, commentators added narration and we published the highlight edits to the website.

At the end of the day, we trekked back down the mountain to create media cuts using footage from all of the cameras. Working with Adobe Prelude CC, we would log the videos and pull sequences out of the best shots. Our work stations were all connected via a Small Tree shared storage device, so we could take the logged sequences and import them into our projects at any time. We never had to transcode a thing, which really sped up the process. 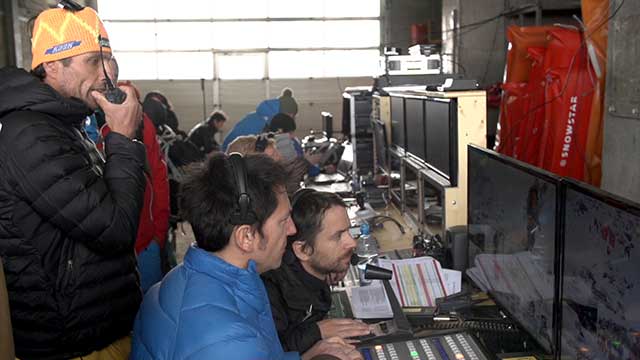 Arnaud: On contest day our primary focus is the live webcast, which lasts three to five hours. A few hours after the competition we deliver the competition highlights for ski and snowboard, as well as a judge’s report, which decrypts the competition from a judge's perspective. Our audience is very passionate and very involved, so the expectations are pretty high in terms of delivery timing.

Adobe: How much content is shot each day?
Arnaud: The camera team shoots approximately 30 to 35 hours of footage on competition day. From that material we produce 30 to 40 minutes of news reel and special deliveries to broadcasters from around the world, delivered the same evening at 18:00 by satellite and FTP. An hour later we deliver our webclips: competition highlights of 8 to 9 minutes each, and a judges’ report of 5 to 6 minutes. The next morning we deliver 15 GoPro runs and the event wrap-up clip. On the second day we deliver a 52-minute highlights TV show. On day 10 we deliver a 26-minute magazine TV show.

Besides the competition day, we also shoot pre-event content for our 26-minute and 52-minute TV shows, venue introduction, athlete profiles, daily webisodes, timelapses, and more. All in all, that’s an additional 10 hours of footage. So we’re up to 45 hours of content per event and 6 events in 2014, so that’s approximately 270 hours of content over the season.

Adobe: What steps did you take to streamline production?
Monod: I created some blank Premiere Pro projects that editors used as templates for their videos. These blank projects already had the best settings, titles and intro video, adjustment layers, and correct audio mapping. I also created presets in Media Encoder CC to help editors pick the right video formats when they exported. This saved time and helped us make sure that the final videos were consistent and met the event’s high quality standards. 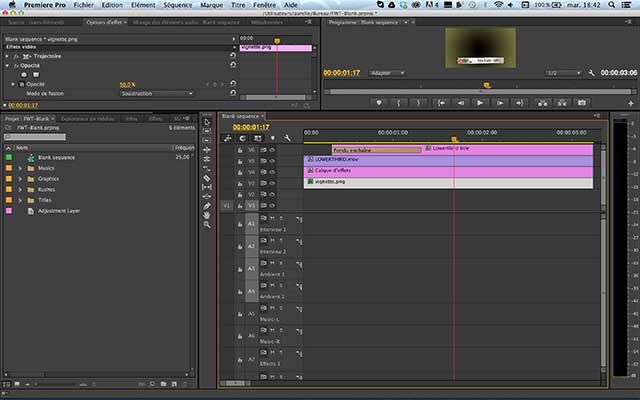 Media Encoder also helped streamline the workflow with its ability to manage exports in the background. We could keep editing while rendering edits, which saved time and helped us deliver our videos on time.

Adobe: Did you use any other Creative Cloud components?
Monod: We used Adobe After Effects to create animations for the premade introductions, and to draw lines showing possible routes and chosen paths down the mountain for each athlete. We occasionally used After Effects for edits when we had time, but it was more important for us to work fast and light with Premiere Pro.

Adobe: How did the editors respond to Premiere Pro?
Monod: Most of the editors had been working with Avid and Final Cut Pro before, so they were unsure about the switch initially. Once they realized how the shared Premiere Pro workflow improved speeds, they were very happy with the experience and all felt that it improved their work.

Adobe: How does the new workflow compare to the previous workflows?
Arnaud: In short the new workflow has allowed us to deliver more content, and a lot earlier. Besides this obvious advantage, we have also gained in workflow uniformity. Every timeline or final edit remains accessible to everyone on the team throughout the season, no matter what edit station or operating system they’re using. My team is composed of freelancers that mostly come equipped with their own edit stations, which was a key aspect of the equation that I had to deal with as a producer.

We've basically gone from individual editors working on their own, to a true collaborative workflow. The latest developments in storage technology and software performance have made our delivery workflow more reliable and more efficient. The team had more rest, more energy, and no one got sick over our long winter season spent running from one event to the next. That may sound anecdotic but in fact it’s not: ultimately that led to a more productive team, embracing every challenge with a smile, and willing to start again next season. As a producer that’s really satisfying.