When even PBS uses its flagship programs as advertising backdrops, is it any wonder viewers are dumping OTA TV for OTT VOD?

“My City Was Gone” – Chrissie Hynde, The Pretenders

This past week, PBS aired Ken Burns' latest 7-part epic, “The Roosevelts”. A Ken Burns doc is a Big Event, and indeed, PBS had over 9 million viewers for the first episode. Somehow, through intelligent writing and meticulous editing, the filmmakers managed to make 14 hours of mostly still images and archival footage not only watchable, but downright gripping. It's a brilliant tour de force, and it's the sort of thing that, of all the broadcasters in the USA, only PBS can do.

Here's what went wrong (off-air pix from episode six on Saturday night; other nights were even worse): 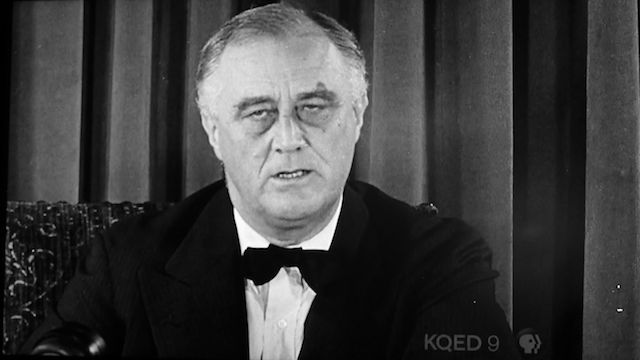 So far, so good. Peter Coyote's voice-of-God narration has drawn us into the distant world of the 1940s and made it come vibrantly alive.

KQED-9 is our local PBS station; their subtle, semitransparent bug is a constant presence – regrettable, but it just sits there quietly and doesn't call attention to itself. It soon fades from conscious view. 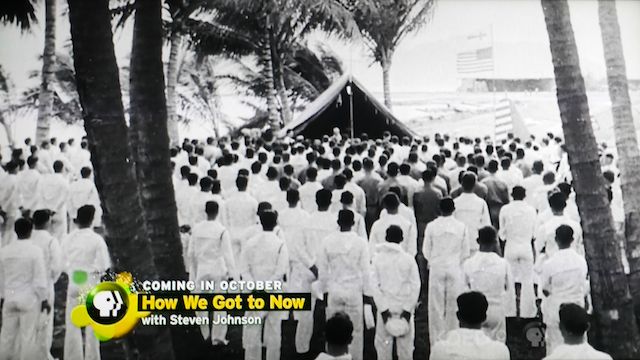 Yes! It's an all-singing, all-dancing snipe! Bright colors! Animation! LOOK AT ME! Engagement be damned; concentration be damned: why allow the viewer to remain enmeshed in the current program when you can shout about some other program next month? 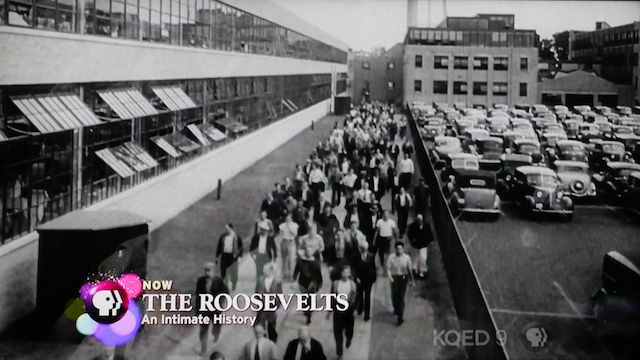 Pity about whatever was being said when the superimposed circus appeared, because I was distracted by that shouty splodge of annoyance. 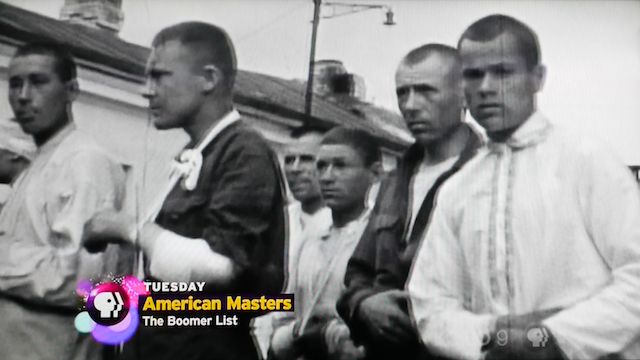 Once again, take me out of the show I'm watching to tell me about some other random show I'm not watching – because without those snipes, there isn't any conceivable way I could find out what other shows you might be showing. And heaven forbid I should actually be allowed to watch the show I'm watching.

Yeah, I know, this kind of disrespect for the program and for the viewer it isn't a new thing, but this was a particularly egregious example, and this time I was goaded into documenting it.

(The first time I really spat the dummy over this sort of thing on PBS was during the first season of “Sherlock”, when we were sniped for “Antiques Roadshow”.

For those unfamiliar, “Sherlock” is a painfully hip/ironic/clever/witty/effects-heavy/fast-cut updated version of Sherlock Holmes stories. “Antiques Roadshow” is a reality show in which an antiques expert appraises junk people find in their attics. Trust me, it's a thrill a minute.

Did PBS seriously think the “Sherlock” audience was in the market for “Antiques Roadshow”? PBS, if you're going to spraypaint graffiti atop the program I'm watching, at least make it relevant graffiti.)

This diminishment of the viewing experience is just one more reason we're abandoning pristine 1080i OTA (over the air) TV, or even recompressed cable, for lower-res but content-first feeds from the likes of Netflix.

Will the last broadcaster/cable guy out the door please remember to turn off the transmitter / IRD?

Disclaimer: There is no material relationship between me and KQED, PBS, or Florentine Films (Ken Burns's production company). I get their programs OTA, and have donated money to local PBS stations in the past (but if they don't give me a reason to keep watching 'em OTA, I'm a whole lot less likely to donate in the future).

Screenshots reproduced assuming that doing so for the purposes of criticism and comment falls under the fair use provisions of section 107 of the US copyright law ; copyright remains with KQED, PBS, and/or Florentine Films as appropriate. “My City Was Gone” lyrics also used under fair use provisions (commentary); copyright Clive Banks Music Ltd. If any copyright holder objects to my usage, I will take down the offending material.