Some picture editors say “I don’t do sound.”  Other picture editors storm into the bay and insist that as much of their edits, effects and automation as possible from the AAF remain so that their “audio doesn’t get [screwed] up.”  I am much more interested in working with the latter than the former.  I can tell by looking at a few moments of their output movie file, without even opening up the AAF, what their timeline will look like in Pro Tools. Typically an excellent picture edit means a well thought out edit timeline.  Thankfully, there are a lot of really great editors out there.  There are however, a few things that can help save some time and money when the project gets to audio post.

INDIE filmmakers wear many more hats than just one. Writing, producing, directing, editing and more… they typically will have more time than money.  For those of us who work in audio, one of the first main hits on the budget typically occurs in the sound department.  Location audio suffers immediately, budgeting less experienced crew, less expensive gear and usually a distinct preference for the visuals over the audio.  Post audio will also suffer since it is last in the chain and budgets are exhausted at that point.  These budgeting constraints can leave the audio recordings and mixing and re-recording in a precarious situation.

Meticulous picture editors will slave over their sound as much as their image choices and montage.  If their picture edit is good then generally their AAF (or OMF) will be neat, organized, have a logic unto itself and best of all – sound good.  If their picture edit is sloppy, not well timed to the music and effects, and mic choices all came from a composite track and not an ISO track, it might take some work to get the AAF into a Pro Tools session to edit and mix.

Obviously, a picture editor who takes the position of “I don’t do sound” probably isn’t the most experienced or celebrated editor on the block.  Sound and picture in the work that we do comes as a package.  They may not do sound well, but no matter what, they indeed do sound.  Every dialog take that is chosen, all of the sound effects that are added and every music cue that is spotted and cut, sloppy or not, is a key choice in the final project.

Post audio can be an expensive endeavor.  Its always a good idea to minimize the time spent at a facility since time is money.  If the editor has spent quality time on the audio editing during the picture editing, that will help enormously in the post audio process.

Mundane tasks like cleaning up stray, unused and unwanted audio from the timeline prior to AAF or OMF export is an obvious one.  There should also be a logic and consistency in the track layout.  A simple solution is to dedicate separate tracks to dialog, tracks to effects and tracks to music as well as specific tracks for mono sources and stereo sources.  Often the translated audio in an AAF is no longer stereo interleaved.  Many picture editors do not take this into account.  Sound editors and mixers don’t care about split mono files, except when they are laid out in an illogical manner. 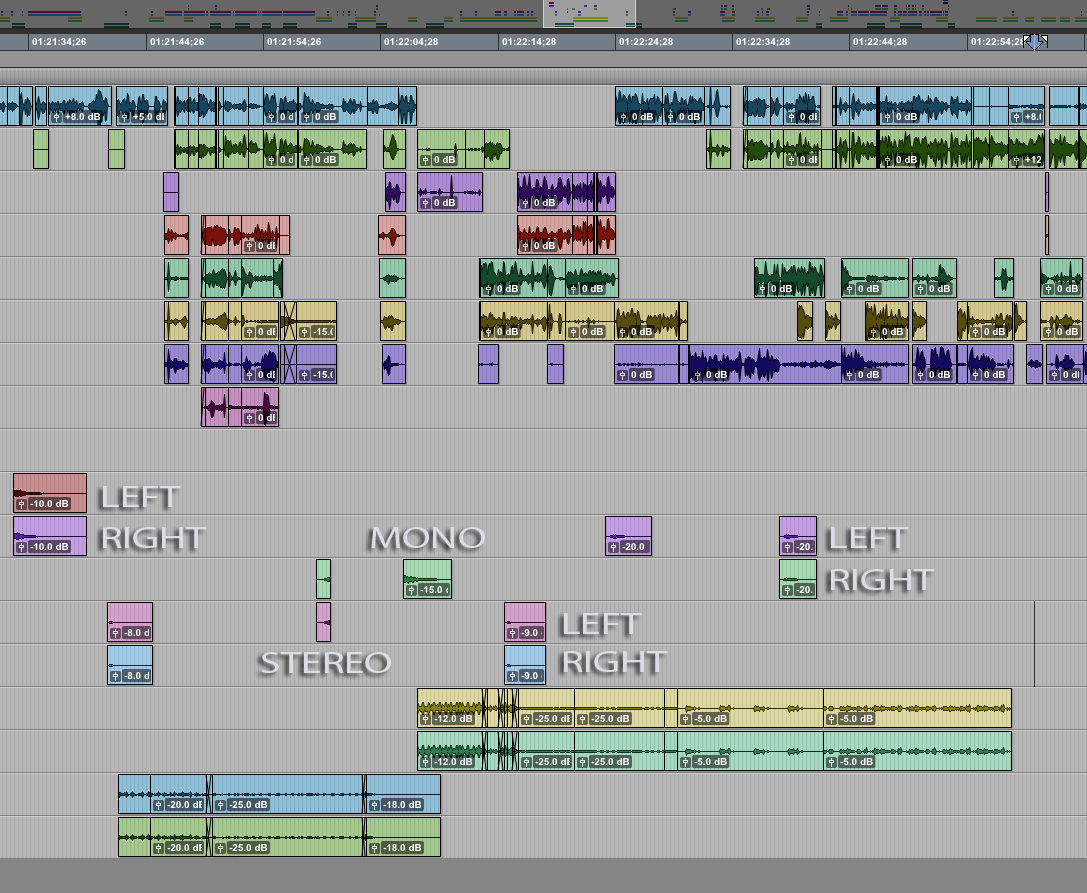 This illustration of an extremely simple edit may help to explain this.  There are stereo and mono elements bundled together here.  And are laid out in an inconsistent manner as can clearly be seen.  In an uncomplicated edit such as this these things can be quickly sorted out by the sound editors.  But if it is an effects intensive show with many mono and stereo elements this can slow things down considerably.  Instead of a quick highlight and drag to stereo or mono tracks in a Pro Tools timeline, individual audio elements must have their sound field determined and then be sorted, one by one.

Track lists that are well thought out and organized and then followed accordingly throughout the picture edit can speed the process.  Not paying attention can have the unintended consequence of improperly checker boarding the stereo field of the files.  What was stereo left on one track just moments ago is now stereo right later in the timeline.  Multiply this practice by hundreds, if not thousands of elements, then the time spent sorting can be considerable.

If sound editors normally do this kind of sorting then why is it a big deal?  Time and money.  A sound house will have to do it in the course of preparing for the mix.  However, It doesn’t make economic sense to be potentially paying top wages for work that could have been done in house prior to the sound hand off.

The dialog tracks, location audio cut by the picture editor, can often be organized with no particular order in mind.  If location dialog were recorded with a boom and a lavaliere, it is an excellent practice, to keep the boom on one particular track and the lavaliere on another.  Sounds logical.  Reasonable.  Practical even….  However, many times, I’ve encountered a changing track order for the various microphones – not only within the entire show edit – but also from within a single scene!

This can soak up many hours of time sorting things out what.  Sound editors will not simply look at waveforms to determine which is which.  The absolute best recording for each audio element must be used.  If there are thousands of small bits of dialog that are not properly labelled, sorted and cut, it can take time to figure it all out. At a mix facility that extra time can translate into extra costs.

Often the duties of the audio preparation for mixing is tasked to someone who might have never seen a non-linear edit timeline opened in a program like Pro Tools.  It’s understandable that if the person has no experience with how an AAF or an OMF opens on the audio side then the preparation can suffer.  Although AAFs and OMFs are wonderful file types for moving media between systems and programs, at least for audio, they can be sorely lacking.

Another essential element for the edit timeline is to include the various roomtones for each scene on a separate track in the AAF or OMF.  Roomtones are something that I speak of regularly since it is not an optional part of sound editing but rather an integral part of it.  Roomtone is the glue for all of the dialog editing and mixing.  If there is dialog re-recording or if there is Foley added then roomtone is essential for the sound mixing.  It is sometimes hard to find. I have asked location recordists about this and I am always assured that roomtones were recorded for each scene.  Many of of the AAFs that I receive from picture editors do not include roomtones. 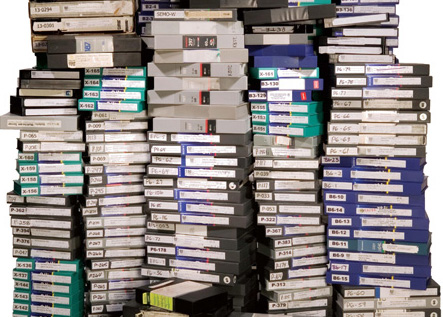 If they were duly recorded and noted then where are they?  They are inadvertently left on the camera masters or the audio masters, often never even digitized into the editing bins.  A good sound editor is going to need them and will go back to the master tapes, files, drives or CD’s and they will be ripped and added to the edit.  It will however, take time and money.  Locating one or two minute files with logs and timecode can take time.

The other option is for the sound team to create a roomtone for each scene.  By looking through the handles of each recording it is possible to piece together, frame by frame, a new audio file that has the quality of the room’s ambience.  Importantly however, that new audio, when looped, should not create an odd rhythmic beat. I call it the “washing machine effect.”  Looped location audio that has a foot tap, a cough or a cloth rub, when copied under a scene, won’t work as room tone.  Instead it becomes a repeating distraction under the scene. Finding the stray bits of “clean” tone inside of handles can be difficult. A good sound editor however, will be quite skilled at creating roomtones.

The picture editor or the assistant has complete control of the sound elements on the edit preparation for these type of projects.  If there are wild lines recorded on set, Foley like sound effects elements, ambiences, roomtones – all of that media runs though the hands and ears of the picture editing team.  “B-roll audio” needs to get digitized just like the picture.  Relevant sound elements should be tagged, organized and properly set aside for the sound team.  If they are not, most likely the sound editor will need to go back to the sound logs and the tapes or drives to find all of the media that is needed.

Sound editors and mixers will want all the best recordings, all of the location sound effects, location ambiences and roomtones.  They will do whatever it takes to get you the best sounding project possible.  In the case of additional dialog recordings (ADR) they may be able to save you time and money by using alternate takes of a scene to cut to sync, and possibly eliminate the need for additional recording for your actors – and also the painful process of choosing takes and mixing to match production.

While picture editing can take months of time, typically the sound editing and mixing process is quite a bit shorter.  Being one of the last processes before final delivery, it can also be when the there is the least amount of money.  And the least amount of time.  Sound editors and mixers are hungry artists who contribute creatively to the final work.  The better prepared for audio post a production is on the technical side, the more time and money there will be for the skills of an experienced and talented sound team to create an amazing final soundtrack.