Samsung is the first company to launch a quad camera smartphone, the Galaxy A9, which offers, according to the company, 4X more fun. Imagine when the 16 camera models arrive… 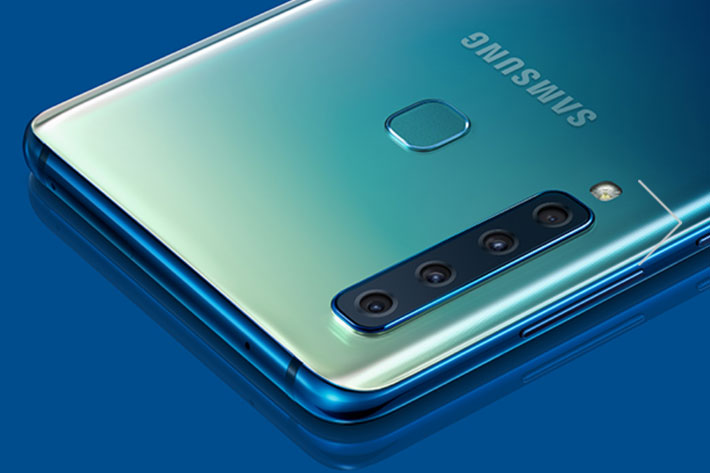 Smartphones with dual cameras are common and some even have three. Now Samsung introduces the first model with four rear cameras, the Galaxy A9, expanding the creative options for photo and video.

The new Galaxy A9 smartphone does not feature the Samsung Dual Aperture the company showed in the Galaxy S9+ model (probably because it does not make much difference having F1.5 or F2.4 as aperture), but the new model may well be a videographer’s dream, as it comes with all or most of the lenses you may need. In fact, the new smartphone is the first in the world to offer a quad camera array, covering everything from wide-angle to telephoto. And the trend for more cameras or lenses is growing… 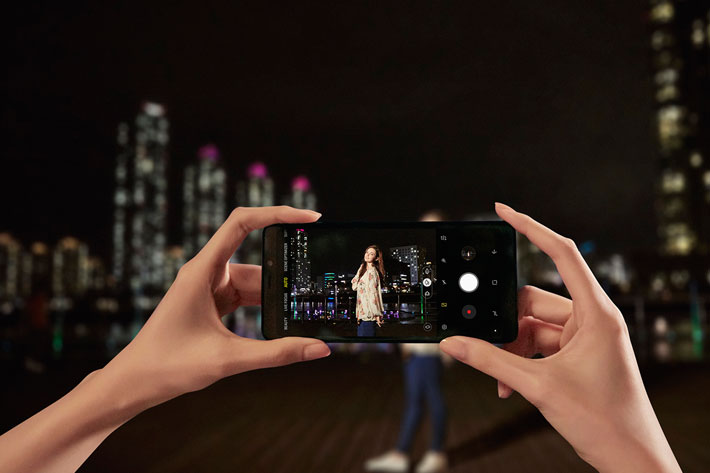 While the Galaxy S9+ was presented as the camera reimagined, the Galaxy A9 is sold as the model that lets the user “capture and share your experiences as you see them”. According to the marketing specialists at Samsung, all this happens, it seems, because of the “power of four”: a Ultra Wide Camera, a Telephoto Camera, the 24MP Main Camera and the Depth Camera. 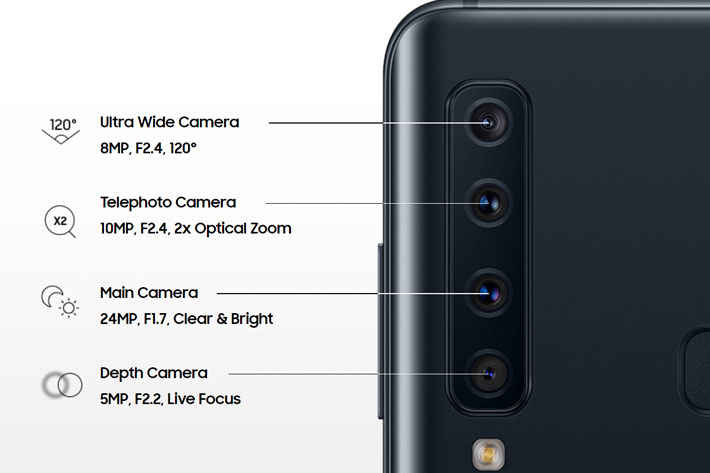 From wide-angle to telephoto

The names do suggest the functions present, but lets look at the details: the wide-angle lens of the Ultra Wide Camera covers 120 degrees and offers an aperture of F2.4 associated with a 8MP sensor. On the other extreme is the Telephoto Camera, a 2X optical zoom with an aperture of F2.4, paired with a 10MP sensor. The main camera, the one you’ll use most of the time, has a F.17 aperture lens and a 24MP sensor. Finally, the Depth Camera offers a F2.2 lens associated with a 5MP sensor, giving you, says Samsung, “the freedom to manually manage the photos’ depth of field and focus on the subject”. On the other side of the phone there is also a camera, the Front Camera, for selfies, featuring a 24MP sensor and a F2.0 aperture lens. 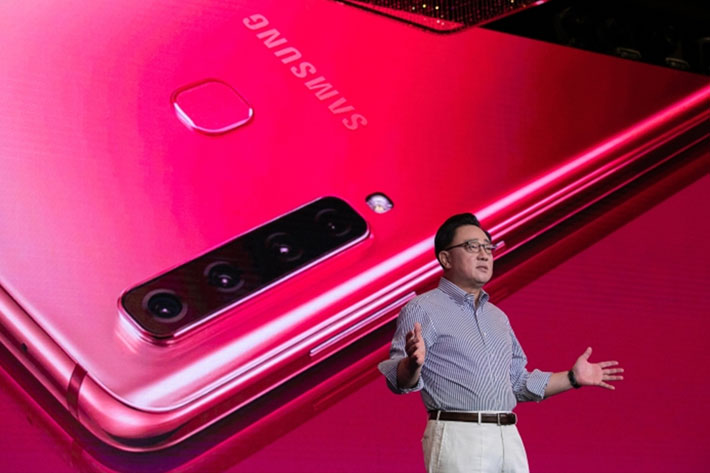 Samsung has not provided information about the focal length of the lenses used, so it is hard to know exactly what 2x optical zoom means, or the value of the standard lens. Also, in terms of video the information available is not much, contrary to what the company did when the Galaxy S9+ was launched. Still, nothing suggests that this model has less than 4K UHD recording at 30 fps or 60 fps and includes VDIS (Video Digital Image Stabilization), continuous AF video, tracking AF and face detection. With 19 photo modes, from Scene Optimizer or Food to Night scenes, Waterfalls, Birds or Text, the A9 features Flaw Detection, which detects Eye Blink, Facial Blur and Backlit. The accuracy of Flaw Detection, as well of the Scene Optimizer feature, may differ depending on surrounding conditions or subject, says Samsung. 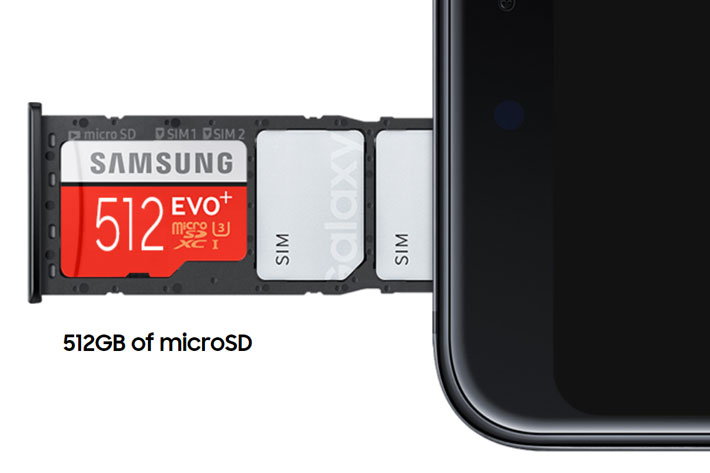 To control all this, the user has a 6.3” Full HD+ Super AMOLED, 1080×2220. The heart of the Galaxy A9 is a Octa Core (2.2GHz Quad + 1.8GHz Quad) with 6GB or 8GB RAM, internal memory of 128GB, expandable through microSD cards to 512GB, all powered by a 3,800mAh battery. The smartphone runs on Android 8.0 (Oreo) and has all the specifications you expect, from Wi-Fi, Bluetooth or GPS to USB Type-C connections. What first attracts attention, though, are the quad camera lenses.

Smartphones have always been limited in terms of optical coverage, and that explains why there is a market for universal lenses that can be used with them, expanding the options in terms of focal lengths. While I believe the market is still there, it seems smartphone companies are keen to include in their models more than one lens, and the tendency seems to be growing. Early this year the Huawei P20 Pro with three cameras (plus one on the front) was introduced, and rumors suggest that LG is working on a model with five cameras (three on the back and two on the front). Nokia, according to others, is busy creating a five camera model. 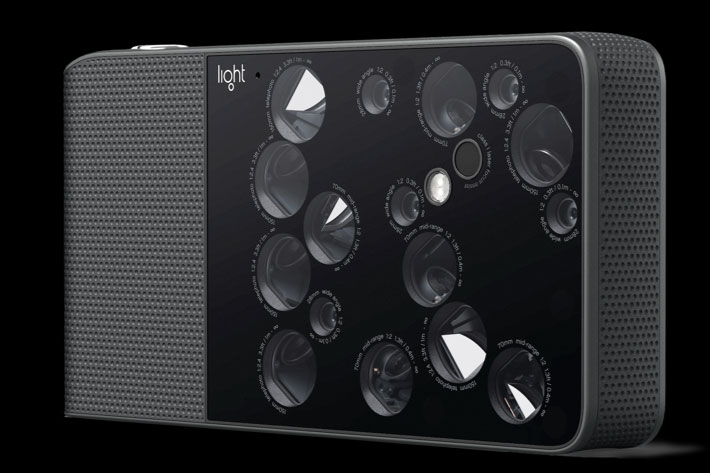 If, by now, you feel like it’s incredible what smartphones offer, then wait for the nine lenses model… which was shown to Washington Post’s Technology columnist Geoffrey A. Fowler. He reports that “A camera-maker called Light has taken this idea furthest. It showed me concept and working prototype phones with between five and nine lenses — yes, nine — on the back. It says its phone design is capable of capturing 64 megapixel shots, better low-light performance and sophisticated depth effects.” Now, just for the record, Light is the company behind the Light L16 Camera, a camera featuring a 28-150mm full-frame-equivalent zoom, 52-megapixel resolution and a dynamic range around 13 stops. Now imagine having a smartphone with 16 lenses and the same power…

The Light L16 Camera costs $1,950, a price that suggests what you may have to pay for a smartphone having as many lenses. But the potential is there and, while there are some limitations, the idea of having everything from wide-angle to medium-telephoto in a pocket device is exciting. For now, though, we have a Samsung Galaxy A9 that is real, will be available this November, in some markets – which Samsung did not specify -, priced somewhere over the $700 mark. That’s, presumably, for the 6GB  of RAM model, as there is a 8GB model that will only make it to certain markets.

Follow the link for more information about the Galaxy A9.

Samsung and Discovery collaborated with passionate local filmmakers to produce the collaborative documentary ‘Eye to Eye With a Tiger’,...