A Tour of Weird Features of an Effective Studio (from the out-of-print book The Fat Man on Game Audio: Tasty Morsels of Sonic Goodness)

Very few game audio houses have a room big enough to comfortably house a mid-sized musical ensemble and the equipment necessary to record them. To play well, people must be happy. A room is big enough for a band and its equipment if, and only if, you can throw a good beer party in it. If you are fortunate enough to be able to use such a room for your audio production, Team Fat recommends constantly monitoring any deviations in the room size by periodically calibrating it with such a party. 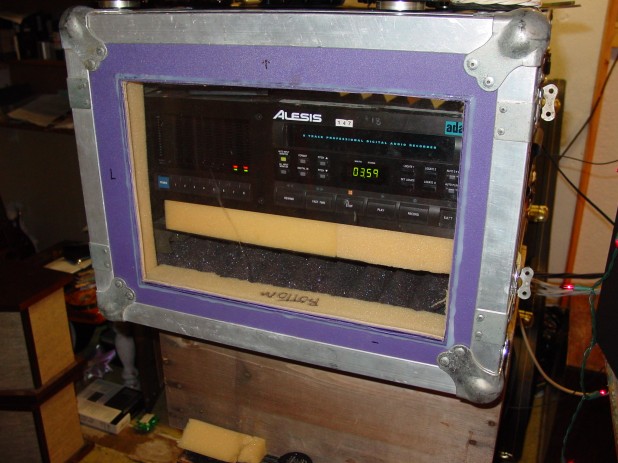 Hot glue, foam, and Plexiglas make a nice isolation case for loud gear. Remember where your bottom is. It should be clearly labeled.

Soundproofing is overrated. Don’t spend a million dollars to block out the sound of the train, just get a place a little farther from the tracks. Book your sessions around the train schedule. Or do a second take for safety; that won’t kill you. You only need a small area that’s really quiet: Large ensembles usually play loud and nearly always drown out the occasional loud sounds that happen to leak through normal walls. On the inside walls, certainly only a small area of your room should feel dead and padded….Dead rooms can be good for voice-over, but they’re no fun to play in. The room should be near eating establishments. Musicians, like human beings, need to be fed. Most studios ignore this fact, choosing instead to host long mic set-ups that plow right through feeding time. I have found that long set-up times for recording sessions are largely an outgrowth of the engineer’s desire to prove to somebody, perhaps his father, that he is a good engineer. Given the choice between a long set-up and a relaxed, happy, fed musician, I will take the latter every time. I assure you that all good musicians can make sound that is pleasing when they are fed. All pleasing music can be recorded easily with a stereo pair of microphones placed at the ear-level of the person who is pleased by the music. If one wishes to have both a long set-up time and a well-fed musician, the room must be near eating establishments. QED.

Let’s get the gear vertical, too. 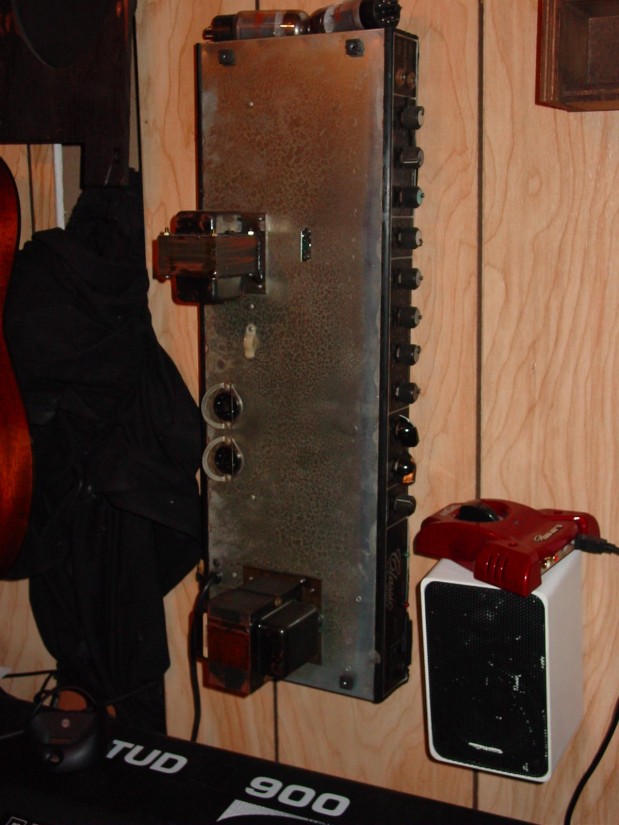 A vertically mounted amp head takes up little room and serves as a very good amp modeling modeler, emulating the functions of the software that emulates non-virtual amp heads. A couple of tubes placed on top will rattle around, giving you that highly desired “tube sound.” You can also use a Pod Pro or similar device to emulate that emulation emulation, or you can emulate all that with the Guitar Port (pictured).

To address the challenge of the crowded studio, Joe pioneered the incredibly efficient Joe Rack, used at one time or another by all of Team Fat. A Joe Rack is a floor-to-ceiling 19-inch-wide rack made entirely of two-by-fours or something close. To keep it from toppling forward, the rear-protruding feet are held down by sandbags or cinder blocks. Other than that, it’s pretty much what it appears to be. Joe is an artist, and his medium is two-by-fours. His father taught him that if it’s not overbuilt, it’s not finished. Somehow Joe took that to mean “never paint furniture.” 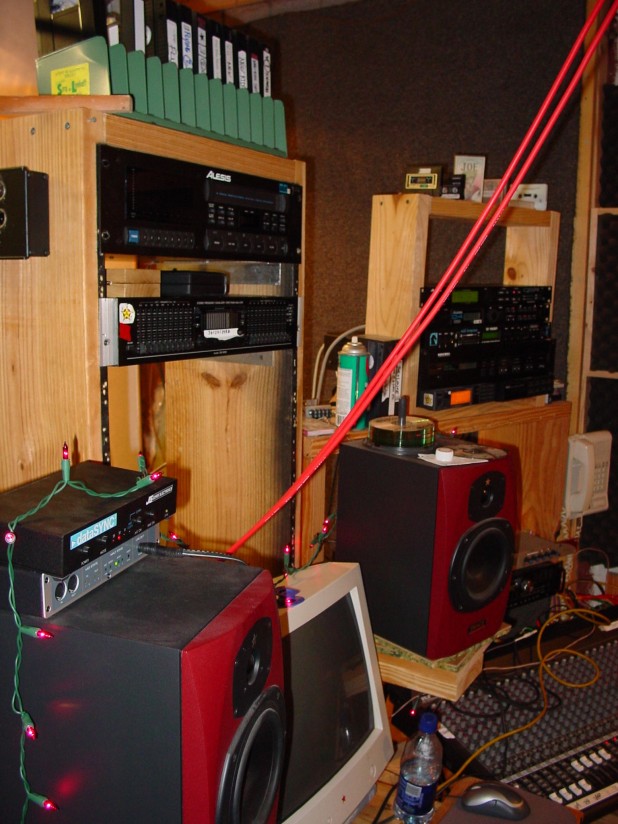 Joe’s Joe Racks. Note the speaker and mouse-pad shelves. The equipment is held in place by wood screws. Joe achieves the illusion of black metal rack strips by spraypainting a vertical stripe on the inner quarter-inch of the vertical boards.

The genius of a Joe Rack reveals itself gradually with use. First, it’s dirt cheap and easy to make. Also, floor-to-ceiling rack space is by far the best way we’ve found to get lots of equipment into a little bit of floor space and into easy reach. Joe Rack users find that they have rack space to spare, and they can be picky about mounting their favorite gear at its optimal height. Furthermore, by running wood screws straight into the rack, your rack spacing is infinitely variable. You aren’t limited by the spacing of the holes on those metal rack brackets, and you don’t have the problem of having to stock those special rack-sized screws. Because your Joe Rack is made entirely of raw lumber, you can easily screw more bits onto it, creating shelves for speakers, mixing consoles, keyboards, and mouse pads. I had bull horns on mine before they migrated to the Rolls. 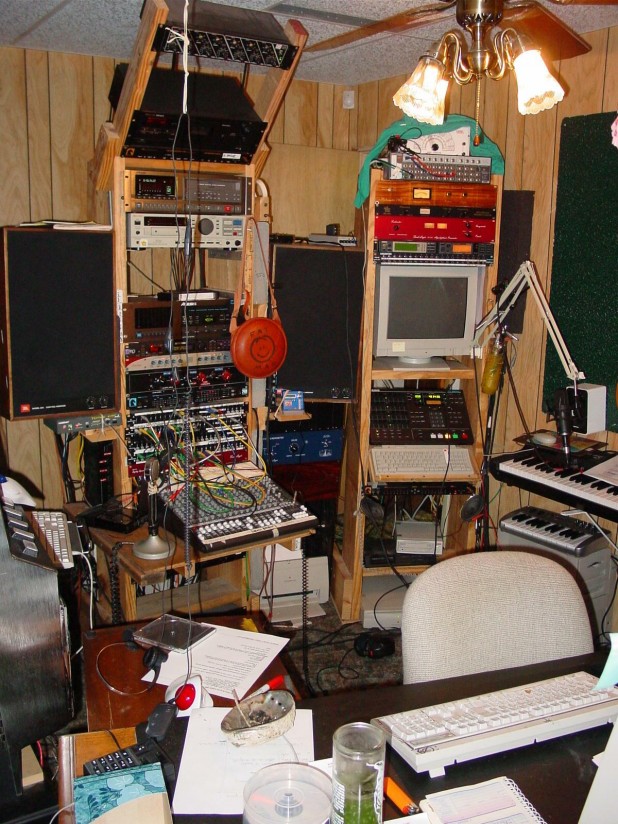 The Fat Man’s Joe Racks. I’ve mounted a radio-style mic stand on the left rack. Note the size of the speaker that can be held in place by these babies. The four cinder blocks on the right side of the left rack are painted with cave drawings, and are strictly decorative, another testament to the sturdy, versatile Joe Rack. The smiley face on the canteen is actually branded in the leather by Spanki as a gift to me. The smiley face cattle brand is legally registered to her in Texas. 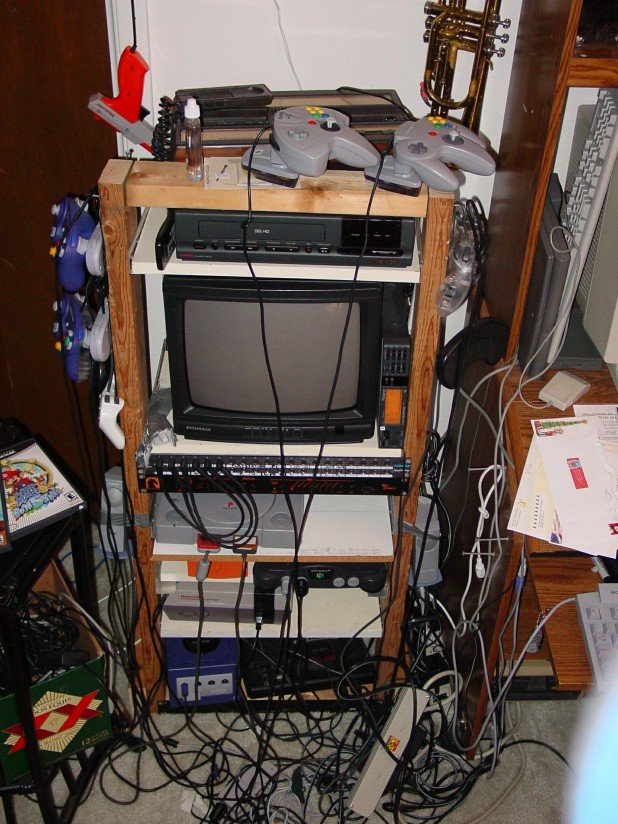 This Joe Rack is used in our home to hold gaming systems. Note the Intellivision on the top shelf, and the Sega Genesis on the bottom shelf. The Atari 800 disk drive is visible in the lower right. 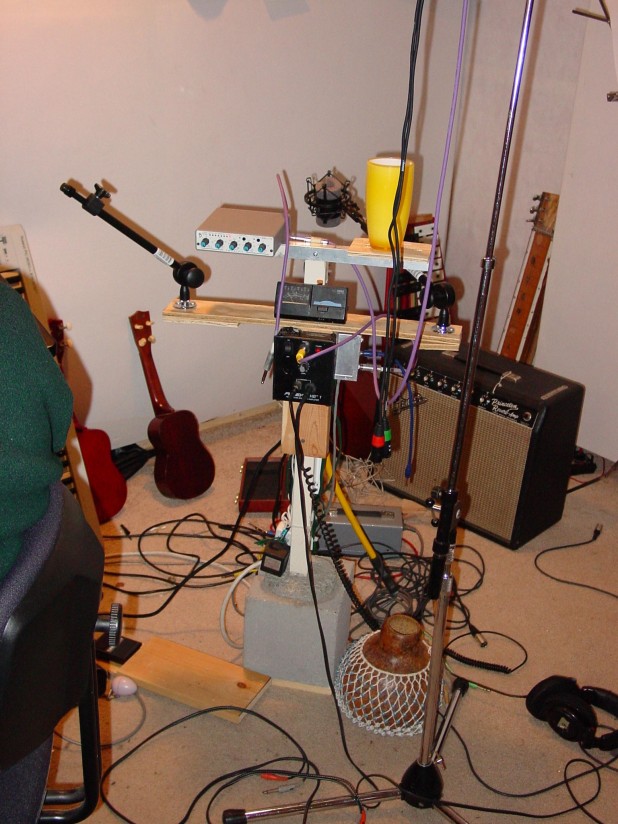 Joe’s Dumb-Ass. That black stick on the left is a mic stand. There’s one on the right side, too. Note the plank near the lower left. It features an elevated surface that allows Joe’s foot to rest comfortably over his “record” footswitch, making punching in much more quiet. 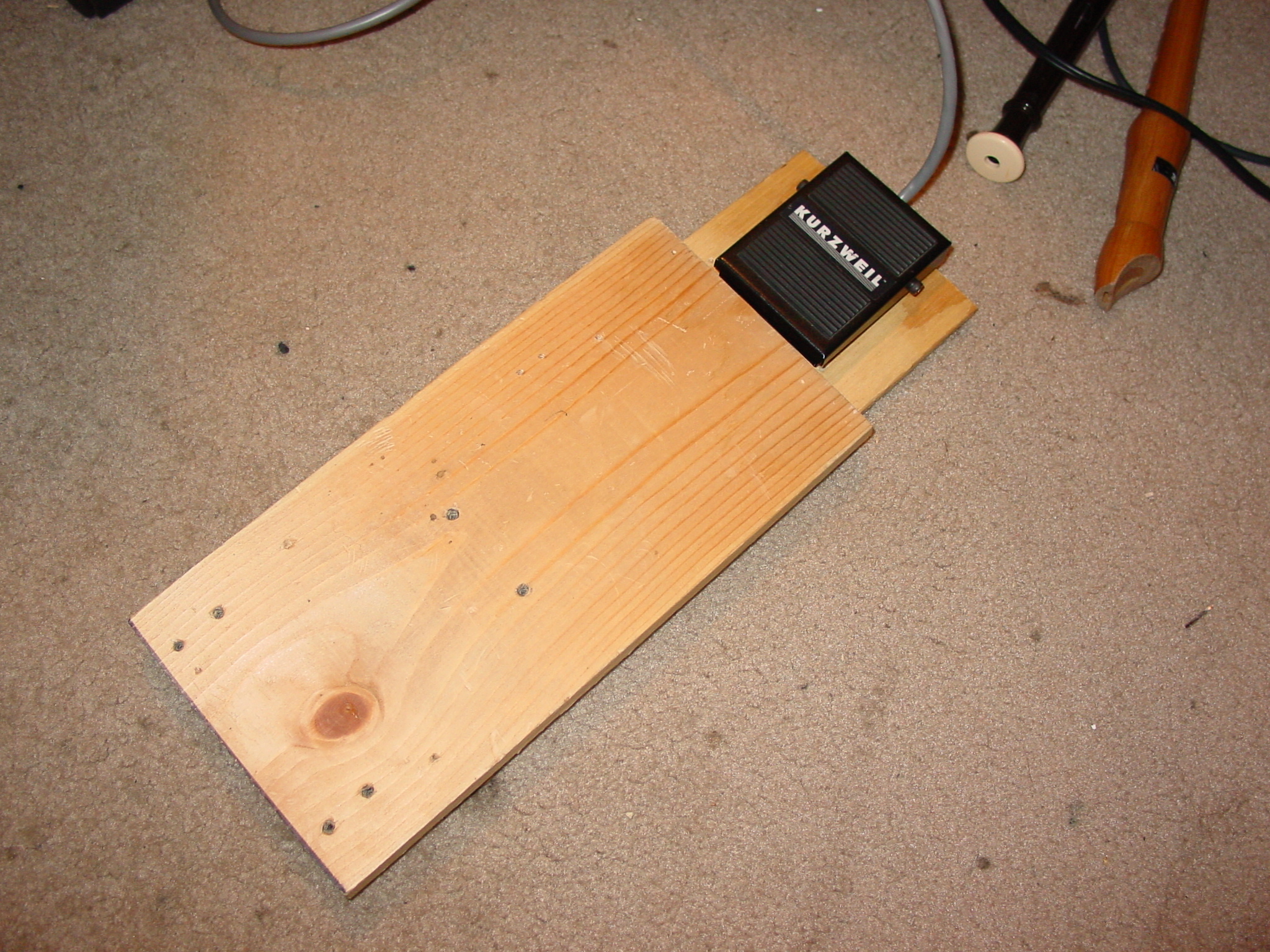 Joe likes to play quiet acoustic instruments, and he’s usually his own engineer. That can present a problem if you’re sitting near computers and tape machines with a sensitive mic. The Dumb-Ass is a relatively new creation that holds everything that Joe needs to record his voice and guitar in a quiet corner of his room. The Dumb-Ass Mach I features two fully articulated mic stands for pop filter, stereo, or guitar/voice micing, a direct box, a tuner, an FMR Really Nice Compressor, an LRC remote for ADATs (not shown), a coffee surface, a power strip (behind the vertical member), six inches of two-by-four that doesn’t do anything, and a massive cement block to allow for a minimal footprint. Consider a comparison of the utility per square foot of floor space achieved by the Dumb-Ass to that of the mic stand in the picture. I can’t overemphasize the importance to game audio guys of mounting equipment vertically. Horizontal surfaces are a rare and valuable commodity, and much of what the game musician uses simply has to lie flat: music keyboards, computer keyboards, mouse pads, mixing consoles, writing surfaces for track sheets, coffee cups, studio controllers, unlabeled CDs, sleeping bass players, embarrassingly large sacks of cash, and ferret toys. Making all these flat things available at once has been addressed in a number of ingenious ways. 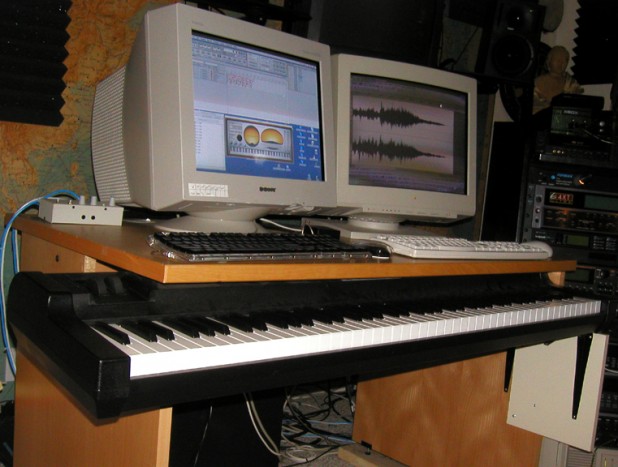 Clint Bajakian of CB Studios cut a notch in his desk to hold the musical keyboard without losing any desk area. 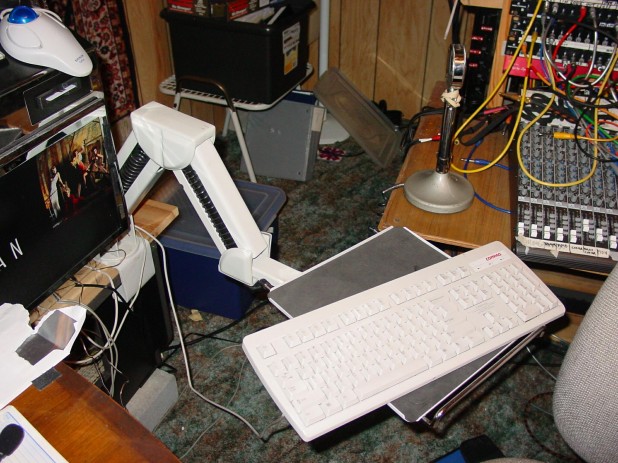 I was lucky enough to be given one of those trays a dentist uses for his instruments. It holds a computer keyboard nicely, and then swivels completely out of the way. 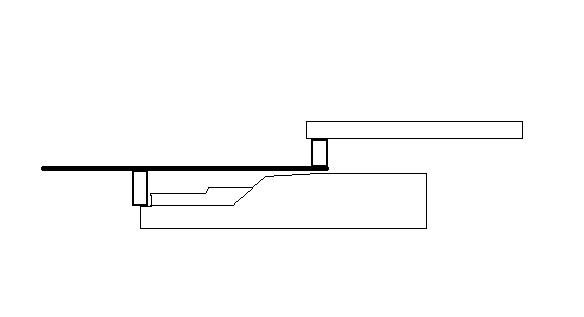 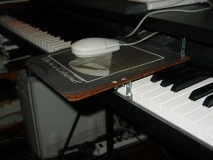 Covert photo and design diagram of the Stooge Mouse Pad, recovered from the enemy only at great cost.

In my tours of the Bay Area, I noticed a brilliant little invention that all of the LucasArts musicians were using. Each of them had removed the clip from a clipboard, and then had attached right-angles of metal and felt padding all over the board, each in a slightly different way. In each case, they would end up with a mouse pad surface that would sit under the desk surface, but over the music keyboard. The pad covers up about an octave of keys, but here’s the trick: The metal and felt pieces slide freely in the slot between the keyboard keys and the front of the keyboard. So when you need those low keys, you just slide the mouse pad up to cover a higher octave. It’s such a good idea that it’s kind of weird to think that the electronic music industry has come this far with only four of these Stooge Mouse Pads ever having been built. Please make yourself one, and be thankful to the Stooges who paved the way. 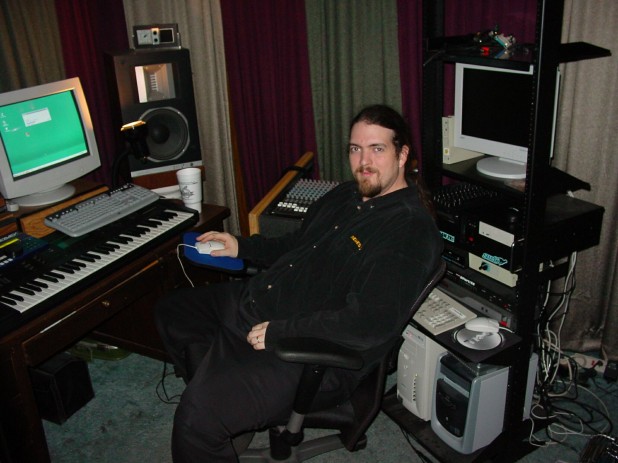 Dave Govett has mounted a mouse pad to the arm of his chair. The alternatives were to go three levels on the keyboard stand, which would be wobbly and uncomfortable, or to move his iced tea, which for this native Texan would have been unacceptable.

Next, we look at cables. The potential for entanglement is huge in game audio. Like all traditional sound makers, you’re likely to be using a lot of things that like to tie themselves in knots: headphones, guitar cables, music stands, guitar straps, pop filters, and microphone cables. In addition, game guys are probably working in a small space, and have got a computer keyboard and mouse, all the wiring to the computer and effects, and most likely a telephone that needs answering in mid-session. Did you ever try to answer the phone when you had your guitar strap on over your headphone cable?

Joe runs most of his cables along the ceiling. 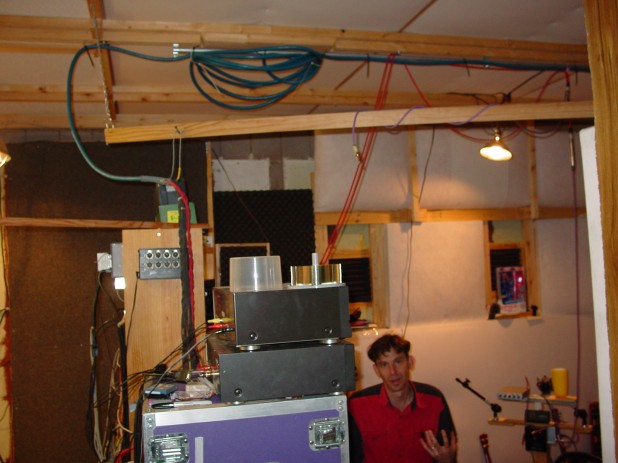 I don’t know the function of this particular two-by-four, and I’m afraid to ask.

To get wires out of the way, I hang headphones and my telephone headset from above, using several rubber bands tied together. 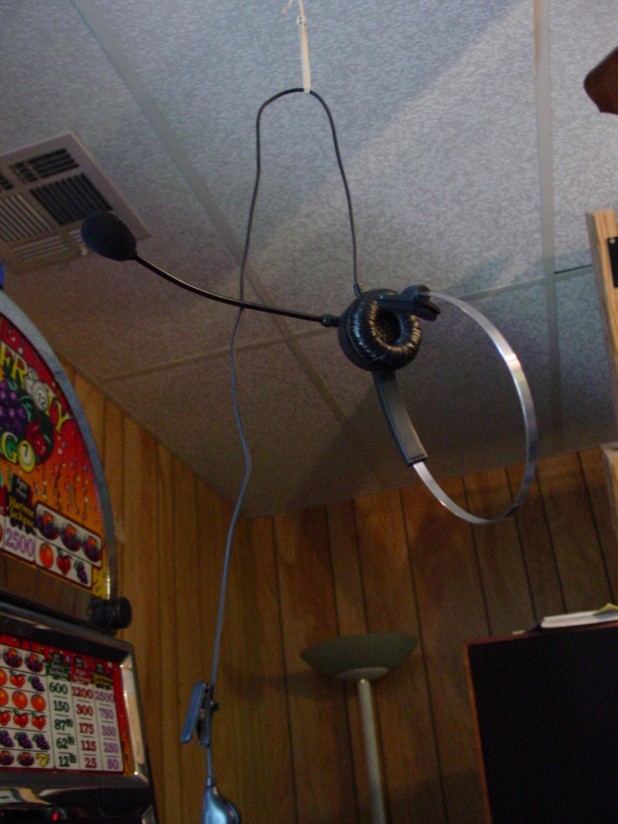 Yeah, it looks silly, but its one less tangle, and I haven’t lost my telephone in months. This brings us to an important point. Altogether too much energy is spent in this business on making studios not look silly. Normal, clean, neat, well-equipped wood-paneled studios are like the stiff dress clothes people used to wear to church in decades past. Whom are we impressing? That engineer’s dad again? 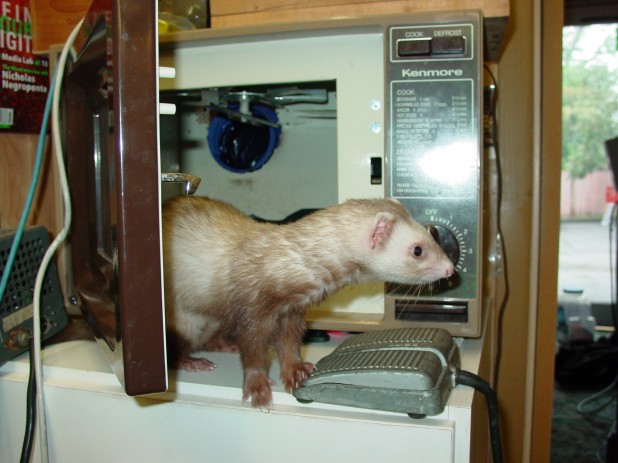 Team Fat’s beloved Booger Buttwell makes a tight punch in Brother Dave’s control room. Don’t worry, no animals were harmed in the making of this book. A secret passage visible in the back of the oven leads through the wall into a large cage in The Fat Man’s office. 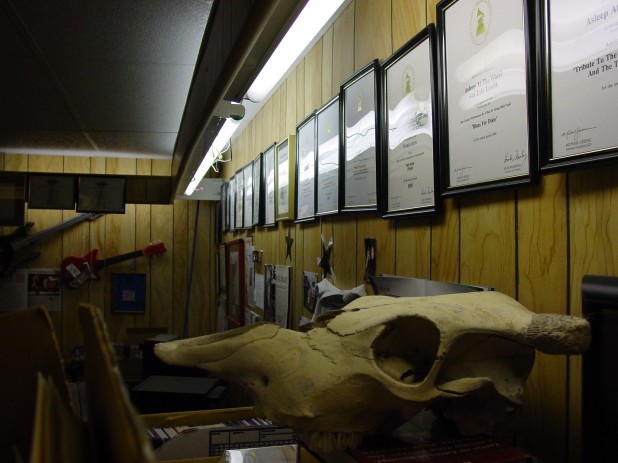 I guess if the clients ever doubt the legitimacy of our work, they can check out some of Brother Dave’s Grammy nominations. There are more in silhouette on the far wall, and one or two under the cow skull awaiting hanging, which is too good for ’em.

Team Fat’s Abbey Trails studio has been compared many times to a kids’ ideal club house. The advantage is that the parents aren’t coming home any time soon. I vastly prefer that reputation to the “immaculately professional” thing, which, again, reeks of fear. I like music to sound brave.