We recently took a week-long trip up to Oregon to visit family scattered about the state that I grew up in, and I decided to pack only ONE camera and the various accessories to see if I could manage to satisfy the call for adventure through action cam imagery. Here’s my experience…

We recently took a week-long trip up to Oregon to visit family scattered about the state that I grew up in, and I decided to pack only ONE camera and the various accessories to see if I could manage to satisfy the call for adventure through action cam imagery. Here’s my experience… and the results.

Setting out for the trip with just my Karma Drone backpack and my other backpack with the GoPro HERO6, Black, accessories, MacBook Pro, etc., I was intentionally NOT going to worry about making this trip about capturing every little detail of our journey, but to let it happen organically after we landed in Portland.

Of course, the first few days were raining and I had little opportunity to really do much, so we spent time with family, mostly. Time well-spent. And a few GoPro handheld shots off the balcony of our hotel showed the fall colors of the city on the waterfront quite nicely.

I did manage to get a few shots of the amazing fall foliage and the Willamette River that runs through the middle of the city from our balcony view in between showers. My only regret was not getting a good time-lapse of the drawbridge but there was very little ship traffic over the weekend.

The weather cleared up and we headed over the mountain pass by Mt Hood and on our way to Bend. I decided to pull off a few times both going out and coming back to slap the GoPro Suction Cup mount on the windshield to capture some video through the tree-lined mountain passes (you’ll see some time-ramped passes in the video down below).

I’ve used these Suction Cup mounts a lot over the years and have never had any issue with them vibrating or coming loose even at high speeds/long distances, so I’m always confident I can trust them even while traveling.

And let me tell you how amazing the built-in stabilization is on the HERO6 Black! The results are so smooth it’s as if it was on a gimbal. The improvement is overwhelming for those of you on the fence about upgrading from your HERO5 Black as noted in this comparison video I posted https://youtu.be/IOiEW7Hrd-8 from my hands-on review. Even the vibrations from the car are nearly completely eliminated.

I only had two batteries with me this trip so for my day experiences, I had to judiciously plan out what two 20-minute flights I wanted to capture imagery along the way. Since the weather was absolutely amazing for late October in Oregon, I really wanted to try to capture some of Mt Hood covered with a fresh blanket of snow, since the previous year when we came up here, it was almost completely bare!

We stopped along the way near the base of the mountain along the highway where a small ski run was closed for repairs before the new season and launched from there. You’ll see in the video we got a couple decent shots from that launch, as well as a lovely 300º+ pano!

This pano was stitched together from still frames of the video capture using Kolor’s AutoPana Giga (APG) and then finished off in Adobe Photoshop. I will be printing this out with my other collection of aerial panos…

Further along the journey is one of my favorite canyons in the stretch of Hwy 26 through Warm Springs. The landscape goes from flat high-desert and drops down into a carved canyon. The video shows a few clips but it’s really hard to capture the majesty of this route even with a road-cam attached. Check out the video below to see the aerial shots I took rising out of this canyon.

Once we got to our resort destination in Bend (it was late evening and dark out so we could only hear the roar of the Deschutes River below our condo) we got up to an amazing panorama the next day!

I promptly sent the Karma up and out over the river canyon below* and was able to capture this amazing panorama from just below the top tree line where I could legally fly.

*Note that I checked all the charts and was allowed to fly in this location as long as I remained below 200ft AGL and below the top tree line of this canyon where I launched as there is a small landing strip within 5 miles of this location.

It was a bit windy in this canyon, so I didn’t fly too low or near trees in the video, and I was being respectful of the distance to not annoy any other visitors of the area that filled with resort condos, hiking trails and the like.

Okay – HERE is the video I keep mentioning. It has a montage of handheld shots with camera stabilization on, Karma Grip, Karma Drone and Suction Cup mounted auto time lapses. Enjoy!

As I said, the GoPro HERO6 Black was the ONLY production camera we brought on this trip (besides iPhone 6s, that is), so using either the Shorty handheld extension or the Karma Grip, we took images, panos and “selfies” with the HERO6!

The HERO6 Black performed much better than I expected, despite such a wide-angle lens. I also would have like to have some ND filters with me or at least a Polarizer (look for my upcoming product review from PolarPro featuring these filters that I got after we returned from this trip). But for the most part, I let the camera run in full-auto whenever possible to replicate the average consumer user’s experience, and overall, I’ve been really impressed with results from the HERO6 Black.

Also, I’ve noticed a strange purple casting that appears in the white edges of highlights and cast on items of white clothing at times. After reading in some of the forums online, I’ve seen that a lot of people are noticing this as well.

But using Photoshop’s Adobe Camera Raw adjustments (or Lumetri Color in Adobe Premiere Pro for your videos), you can easily knock out the purple highlights from any of your images:

Of course my wife and I had to get a couple typical tourist shots along the hiking trail! 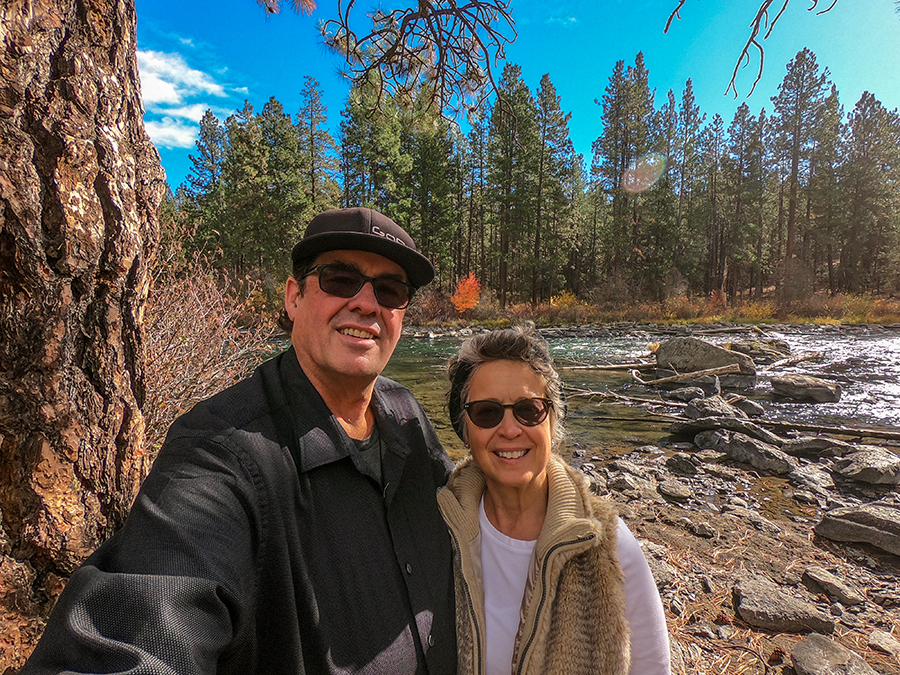 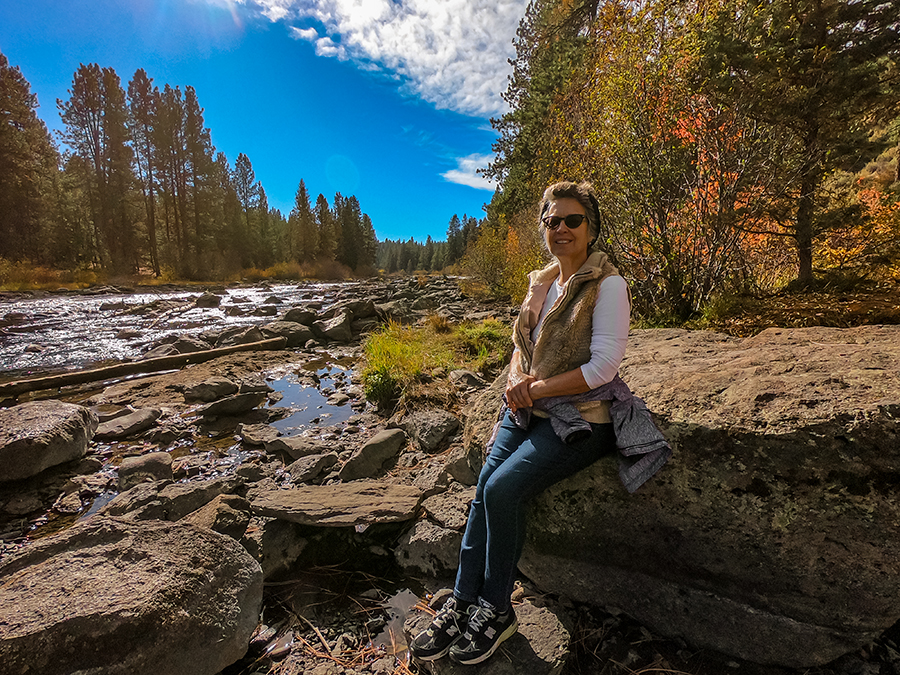 So while we were in Bend, we had a small family gathering with my parents and my brother & sister in-law at our resort condo and managed to get everyone to smile for the GoPro on the coffee table, taking sequenced shots from the Shorty extension handle tripod. In hind-sight, I should have raised the camera, but food, wine and laughter prevailed!

Our final trip back to Portland we were blessed with more blue skies, white snow-capped mountains and contrasting fall colors looking up the windy Columbia River at a spectacular lookout a friend hipped us to that’s off the beaten path. I would have loved to launch the Karma Drone from here but it was too windy and now real launch/landing site I’d trust to take off from. So we settled for a single awesome photo!

What Worked – What Didn’t

For the most part, it was freeing to just have the GoPro HERO6 Black to keep in my pocket attached to the Shorty extension for whatever occasion we found ourselves. We took tons of family shots and goofy videos having fun that aren’t shown here but were a lot easier than relying on crappy iPhone videos. But mostly we captured some amazing scenics along the way. It did make make me wish, however, that I had a DSLR with a zoom lens at times, but I also have thousands of those shots filling up hard drives at home already and I simply didn’t have to futz with much bringing the HERO6 along. I found that I just used it more and didn’t feel like I had to dig out a big gear bag everywhere we went.

One tough lesson I had to learn the hard way was not having a fast enough *Micro SD card with me. I was using Lexar 633x and SanDisk Ultra which have worked just fine in the HERO5 Black previously, but I was getting Card Error messages often when shooting 2,7k/60 or 4k/30. That’s really tough when you’re mid-flight and you have to bring the bird back home and land it to reboot the camera. I did learn if you don’t try to shoot anything over your last card error shot, the HERO6 will repair the end file writing and save your last video upon reboot, so that’s a big plus!

Sadly, the Karma was pretty restricted in where we could fly it. If you’re out in the middle of nowhere (no buildings, bridges, reinforced concrete, etc.) then it seemed to work okay.

Otherwise we’d get compass errors and couldn’t take off (not that you’d ever want to take off with a compass error or in an unsafe location, so in this case, the failsafe does work!). It’s just that relying on the Karma for my only aerial shots, limited me to only a few locations that I would normally be able to fly a DJI Phantom or Mavic Pro with ease.

But what I could do with the Karma was remove the gimbal and attach it to the Karma Grip for smooth handheld shots with the HERO6, so not all was lost.

Overall, the HERO6 Black and Karma gave us flexibility and accessibility to make some fun and creative memories of our short trip!