On October 23rd, I stood on one of three triple-tier media risers on Belmont University and outside the last Presidential Debate for the 2020 election. Among a sea of cameras, lights, and correspondents, Sony equipment dominated the platform. From B4 News cameras, like the PWX750, to Sony Cinema Line cameras, like the FX9, to a single Sony A7s mirrorless camera. The Debate risers’ scene showed Sony manufacturing on display and exposed the Nation’s broadcasting companies’ preferred camera. I expect the next time I am surrounded by the best of American Broadcasting; I will see the Sony FX6 everywhere. 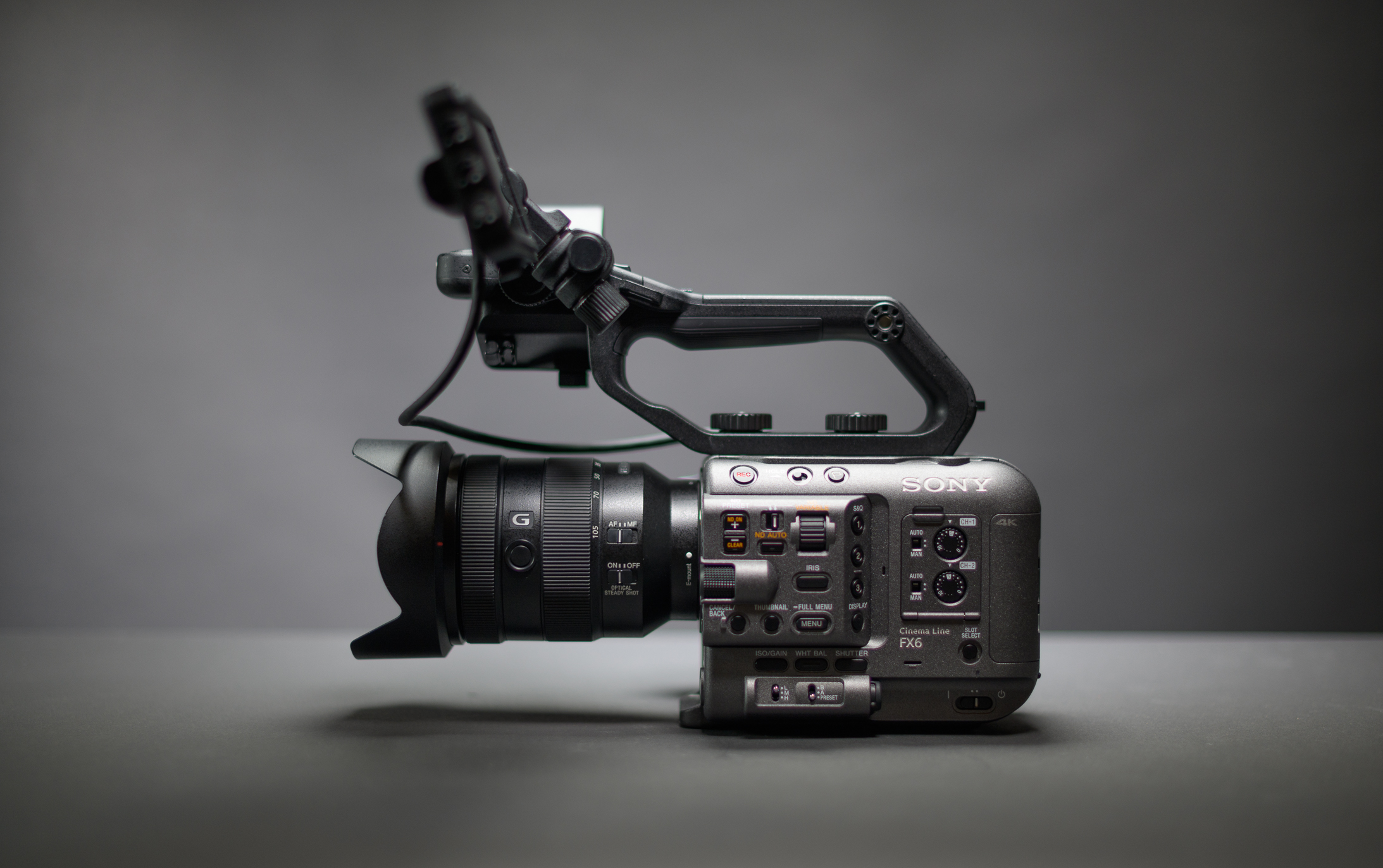 For the first time, Sony blends the Sony Alpha system with the new Sony Cinema Line to create the Sony FX6. Yet, what kind of camera does one get with this mixture of camera line ups? Is the FX6 more like the Sony A7s III or more in-line with the Sony Cinema Line? I hope to answer this question for you. I will not mince words; the Sony FX6 is a killer combination. Let’s look at the features found in the new Sony FX6.

The Sony FX6 is an example of an imaging company blending two different internal divisions, mirrorless alpha and professional video, into a camera to reach everyone. Not too expensive. Very user friendly. It is a hard target to hit for camera makers. How does Sony hit this target and make a fan favorite? What is most important to me is the color the camera delivers. Below you will see a simple shoot I did with the Sony FX6 and the Vazen 85mm T2.8mm Full-Frame 1.8x anamorphic lens. It is a wide view of an over-cast autumn day in Nashville. 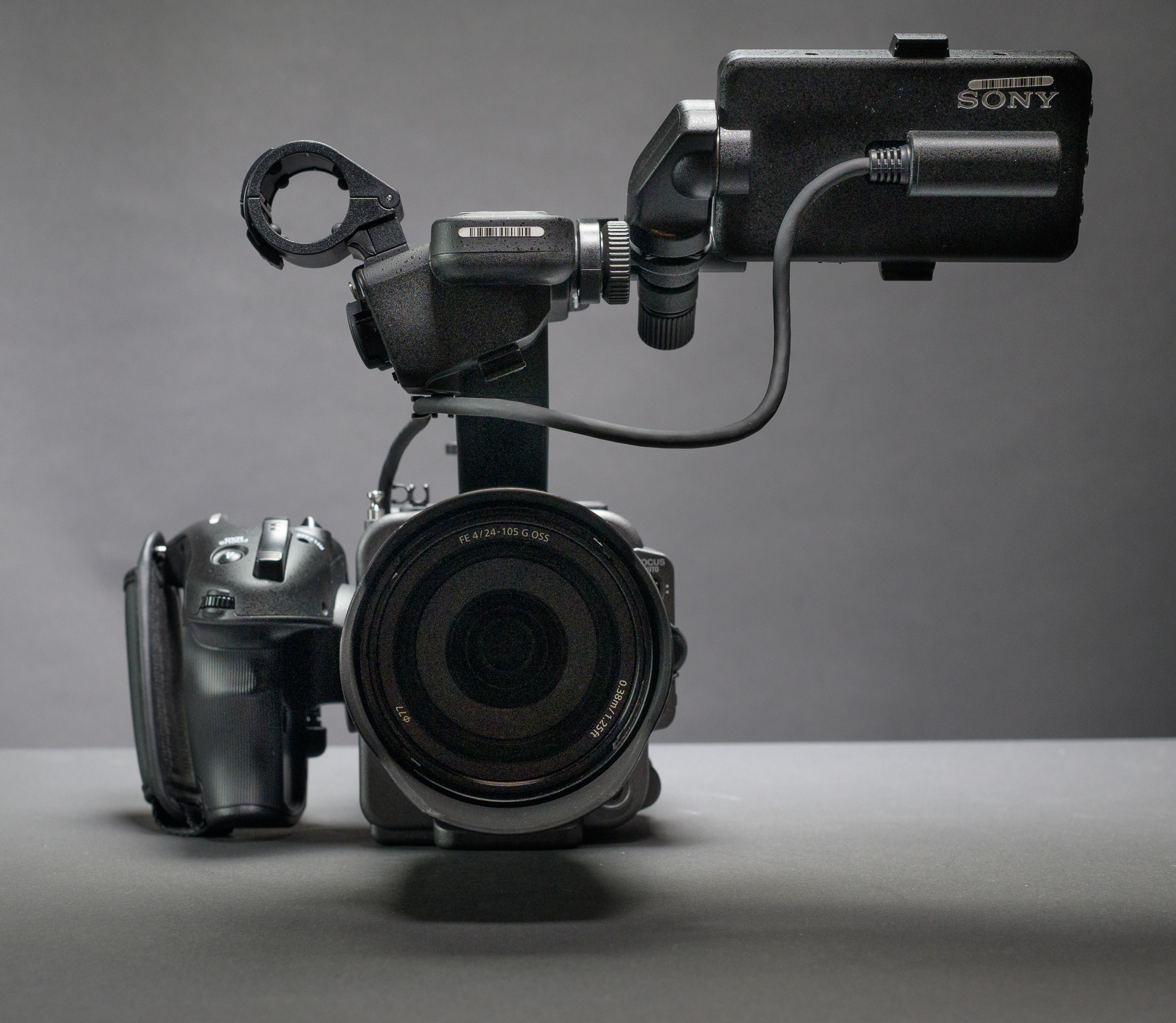 The 10.2MP full-frame CMOS Exmor R Sensor delivers minimal rolling shutter and can internally record up to 240fps in HD and 120fps in 4K. All in 15+ stops of dynamic range when shooting Slog 3 Cine EI at 800 ISO. To keep close to the base ISO settings, Sony added their popular electronically controlled optical neutral density filter wheel with smooth ND transitions from 1/4 > 1/128. So smooth, in fact, you can set ND to auto and watch the depth of field in a scene smoothly change as you adjust your aperture. Much like Cinefade can do with motors attached to an aperture gear and geared variable ND in a matte box.

What about Autofocus. Yes, many of us have come to rely on Autofocus for many situations. Well, Sony has you covered here too and covered with focal-plane phase-detection AF with up to 627 on sensor AF points. That is 89% of the Sony FX6 image area with face-detection AF and real-time eye AF. A 7-step autofocus transition speed setting helps you get the look you want. I personally like the speed transition a little lower on the scale when shooting at 24.00p and cranked all the way up when shooting at 120fps.

The Sony FX6 is a 4K camera. We see cameras coming out with 12K, 8K, 6K options, and Sony present us with a 4K camera. I can hear the derogatory statements within the internet echo chamber now. “It’s only 4K.” “Not 8K, not me.” These are the kind of comments one expects from people who already were not going to buy the Sony FX6. It is best to ignore them. In my opinion, Sony met the needs of professional shooters where they needed them. 4K is where many of us are right now. 4K is where consumers are just beginning to embrace.

The Sony FX6 can internally and continuously record 120fps in 4K (QFHD) and 240fps in HD. Reliable options for the FX6 and well within Sony’s Cinema Line expectations. It is nice to have the opportunity to shoot 120fps in 4K, but I rarely have the need. I’m expecting many of you might need the 120fps, and the feature helps Sony FX6 owners use the camera on more gigs.

Some of the features separating a mirrorless camera and a professional video camera are the internal recording options. The Sony FX6 delivers professional codecs and bit depth. Internally the FX6 can record DCI 4K / QFHD as well as HD. XACV-I All-Intra422 10bit (600mbps) is the highest option. For those more extended interviews, the FX6 offers users a XAVC Long GOP.

The Sony FX6 has two slots located at the rear, operator side of the camera. A door covers the two card slots and helps keep moisture and dust away from the openings. Interestingly, the Sony FX6 can take two different types of media within a single card slot. Both the CFexpress Type A and SD Cards work. I did not test if one could use them at the same time. I tried an Angelbird SD card and the Sony supplied CFexpress Type A they sent along with the Sony FX6. Both worked at the highest resolution and frame rate without any problems. I tend to lean toward using a CFexpress Type A for the simple reason many people think ALL SD Cards are inexpensive, so they rarely plan on returning the SD Card to you, ever. You know who you are.

The Sony FX6 will be able to send out a RAW output over SDI. The ability to record externally opens up the Sony FX6 to very high-quality shooting capabilities. While I am not a huge fan of external recorders, I understand their place in the market. In a perfect world, the new HDR Video Assist from Blackmagic Design could record 12bit Blackmagic RAW from the Sony FX6. That is a codec/camera combination I want to see. I might be dreaming here, though. The RAW output will likely be 16bit linear, which will need to be converted into more usable RAW data. 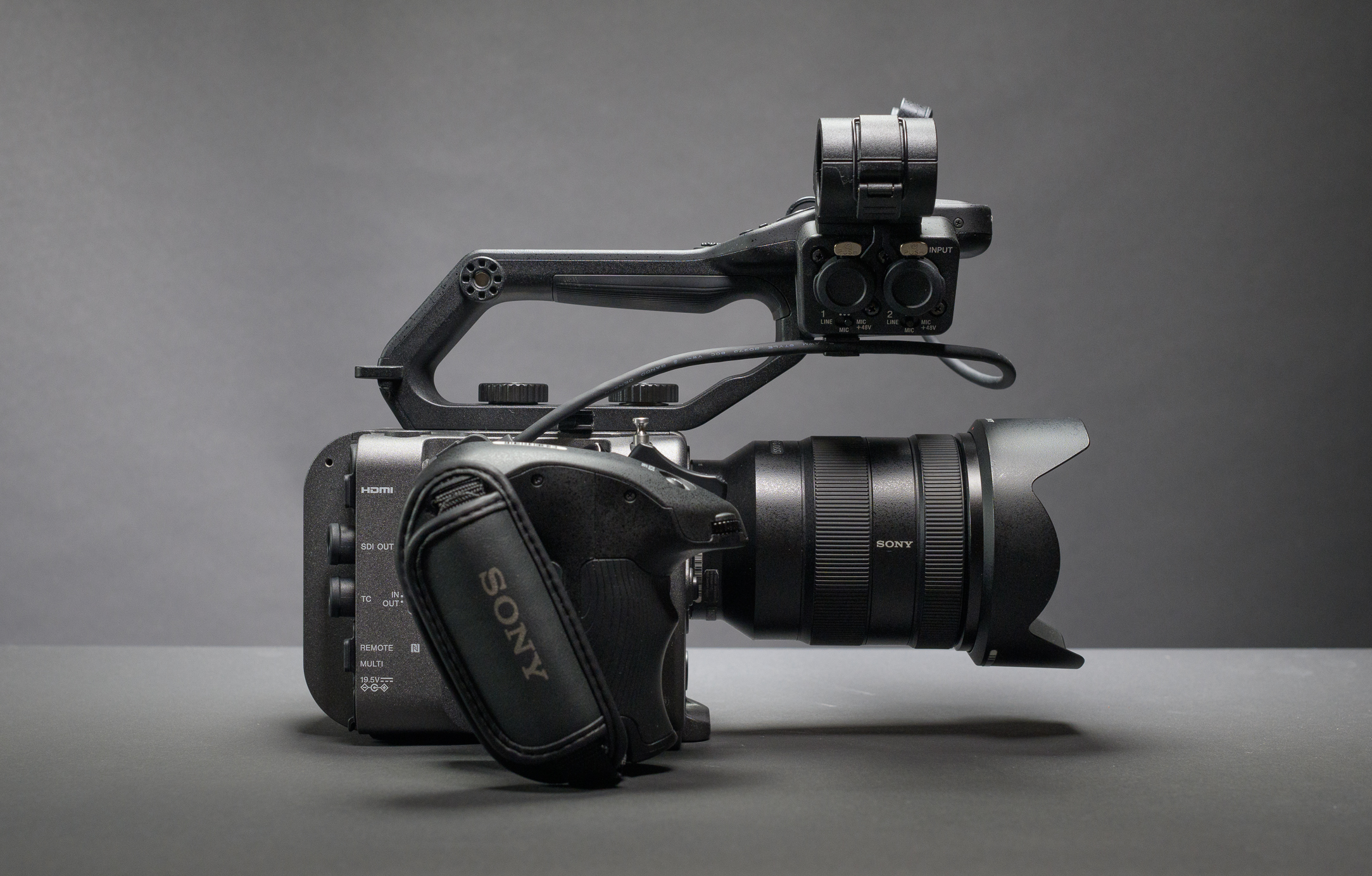 Since the introduction of the Cinema Line, Sony has attempted to create a look uniting all three cameras, the Sony Venice, The FX9, and the FX6, into a very similar color palette led by the Sony Venice. I like this idea for several reasons. First, many camera operators may not want or need two Sony Venices or three FX9s. They might want a different option for different reasons but achieve a similar look across the Sony Cinema Line brand. Who loves to match cameras in post anyway?

Second, a Sony FX6 shooter can build out their camera and still deliver incredible color and tonal range without breaking their bank accounts. What Sony is doing is giving stunning color, my opinion here, to the masses. If, however, you decide to create your own “looks,” the Sony FX6 can import LUTs and Scene files. Options for internal recording and color options are Slog 3 and wide color gamut, S-Gamut3, S-Gamut3.Cine.

One of my favorite features in a camera is the Sony electronic optical ND filter wheel. Such a simple tool, and it is so useful. I understand that sometimes what is simple for operators was likely a challenging engineering task for someone or a team of someones. I want to take the time here to thank whoever developed this tool. It is amazing and helps a ton. A single on-camera dial never gave me so much joy.

What you see below is a very non-scientific ISO Noise test I shot in my kitchen on the Vazen 85mm T2.8 Full-Frame 1.8 anamorphic lens. My big take-away from this test? A lot of handy high ISO options for shooters where you can expect a pretty clean image. Interestingly, a buddy of mine and I talked about using some prevalent and high-end camera systems, and we lamented about the lack of higher ISO options in those systems. We ended our conversation with a single thought; instead, we would prefer to shoot with a better low-light capable camera than what is popular or looks good on our DP shoulders. The Sony FX6 will not limit you in low-light. Yes, I shot an ISO Noise test with the Vazen 1.8 anamorphic which makes for a very wide frame on the Sony FX6.

Flaring a lens is about as good a test of a camera’s autofocus features as one can find. A shot a little video of my wife and three cats soaking up the rays of a setting sun. The lens flare did not stop the Sony FX6 from locking on focus on either cat or human. The Autofocus is excellent when shooting with Sony E-mount lenses.

At the time of my review of the Sony FX6, the on-board monitor was touch-screen capable. Accessing a quick menu to change crucial settings was easy and fast. This is an improvement, but I want more functionality. If I’m using a monitor on the FX6, I want to change all screen settings. I expect Sony to continue to update the firmware for this feature, and the monitor touch-screen will get better and better. Don’t get me wrong, it is good now, but I want more.

Sony has done some work to reduce the menu diving needed to change some camera settings. The touch-screen helps with this because the most accessed features appear on that touch-screen menu too. However, the Sony FX6 Menu is still deep with layers of choices, but the most useful settings are easier to find and access. 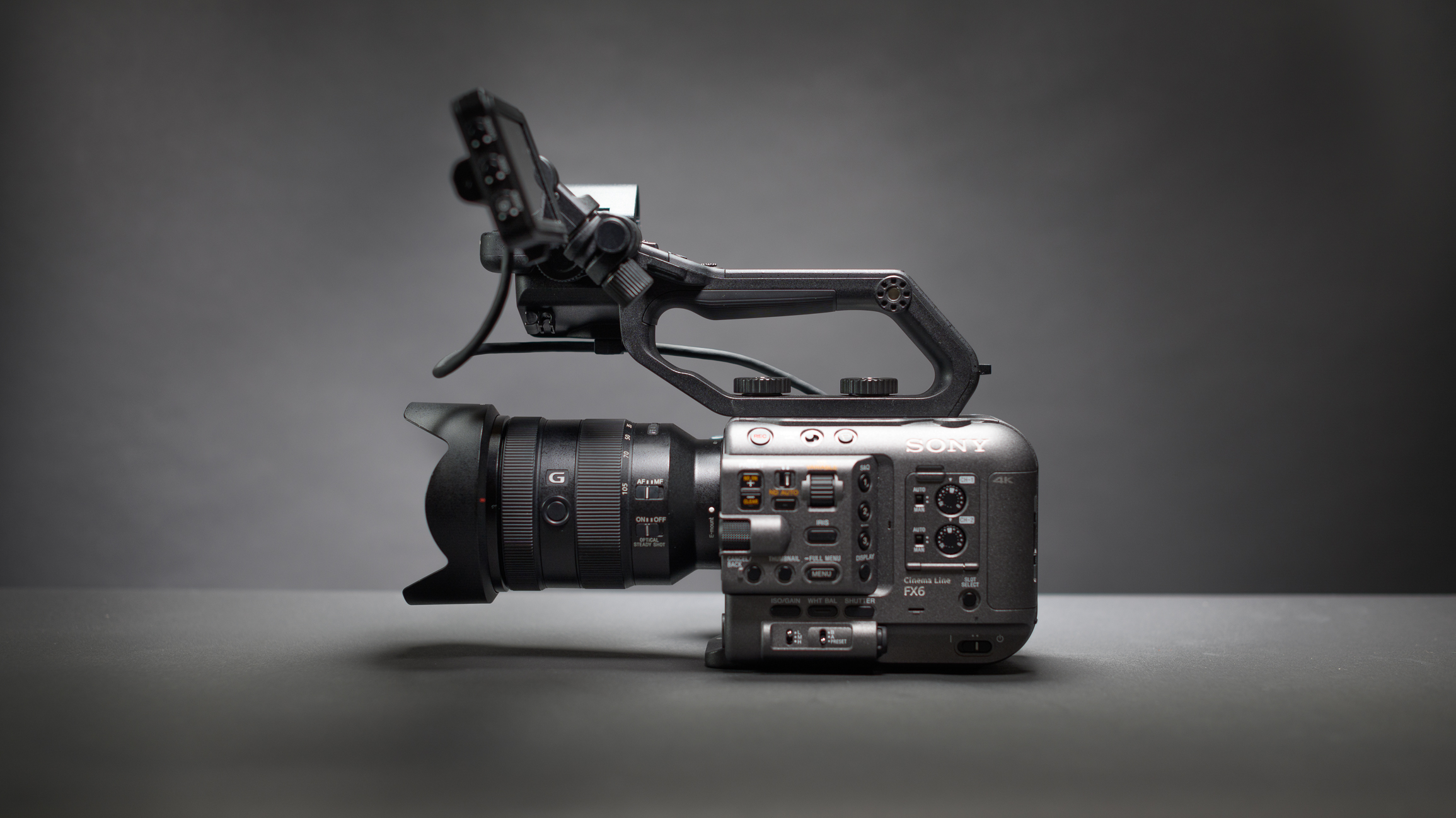 The Sony FX6 is very close to the size and weight of the Sony FS5 ii. The full-frame camera is light-weight, balanced well, and fits in the right hand well. When paired with the Sony 24-105mm, the camera lens combination felt practically feather-weight. I doubt many hand-held shooters will experience pain or fatigue in their right wrist. I loved the size and weight of the FX6. The camera will pack well and travel well. I can see a single 1510 Pelican Case capable of holding an entire Sony FX6 kit, lenses and batteries included.

So here we are. Around $6,000-7000 USD for the Sony FX6, which is a beautiful camera that more than fills shooters’ needs right now. Sony made the right camera at the right time. Throughout my review period, I loved shooting with the Sony FX6 so much I could see myself preferring the smallest Sony Cinema Line camera as my number one option. If I had to march with protesters again, I’d like to have a Sony FX6 in my hands. The weight and size of the Sony FX6 is near perfect for this type of shooting. For those who want to float the camera on a gimbal or easyrig, know that the Sony FX6 will thrive in those situations as well. One really can’t go wrong when shooting with the Sony FX6.