Compare different stereo clips, and how each microphone differs logistically.

Several manufacturers currently make stereo microphones for the latest iOS devices with direct Lightning connection (recent models of iPhone/iPad/iPod Touch). Two of those honored me by sending review units: IK Multimedia sent the iRig Mic Field, and RØDE sent the i-XY-L. True stereo delivery of every recorded audio asset is not always appropriate, but when it is, it can be quite dramatic and can greatly enhance the viewer’s or listener’s experience. I made sample stereo 48 kHz/24-bit recordings of fast-moving trains and restaurant ambience. Read and listen ahead. 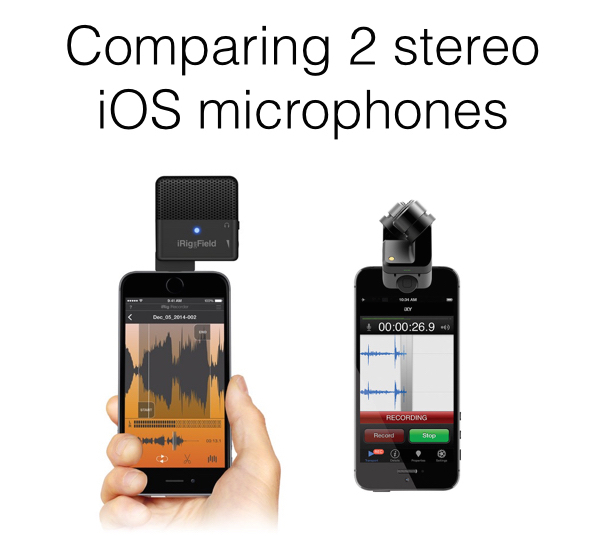 Several manufacturers currently make stereo microphones for the latest iOS devices with direct Lightning connection (recent models of iPhone/iPad/iPod Touch). Two of those honored me by sending review units: IK Multimedia sent the iRig Mic Field, and RØDE sent the i-XY-L. True stereo delivery of every recorded audio asset is not always appropriate, but when it is, it can be quite dramatic and can greatly enhance the viewer’s or listener’s experience. I made sample stereo 48 kHz/24-bit recordings of fast-moving trains and restaurant ambience. Read and listen ahead.

Which types of audio material merit true stereo audio delivery, and which don’t?

It is rarely appropriate to have dialog of two or more people to be delivered as stereo in a theatrical film or video, primarily because the stereo image only makes sense with a wide shot, not when cutting between closeups of each person who speaks. That same rule generally applies to audio-only production for radio or audio podcasts. As a result, if you record “stereo” just to achieve dual mono, then in post you’ll be separating the “left” and right” channels to two centered mono tracks, as I have covered in prior articles.

Stereo audio ambience works very well either by itself or together with mono narration or isolated dialog or interview clips, whether the final program is film, video, radio, or an audio podcast.

Of course, you can record stereo and then create a proper mix to mono later (or simply choose one of the left/right channels, if more appropriate), so stereo microphones can also be used even when you may not necessarily deliver stereo as a final product with every recording asset.

When used with compatible software (details ahead), both the iRig Mic Field from IK Multimedia and the i-XY from RØDE have a built-in stereo A-to-D (analog-to-digital) converter which can deliver 48 kHz (the absolute standard for today’s digital audio for digital video) at up to 24-bit resolution. (See my recent article Understanding 24-bit vs 16-bit audio production & distribution.) Both of these competing stereo mics can also deliver 44.1 kHz at up to 24-bit.

44.1 kHz is the standard for the —now waining— audio compact disk and (at least for the moment) for audiobooks (although I hope that ACX/Amazon upgrades that soon), but not at all recommended for video production since it would be non-standard, as covered in detail in prior articles.

The i-XY-L from RØDE is also capable of delivering up to 96 kHz/24-bit stereo with compatible software. Some audiophiles prefer to have a 96 kHz original recording, although would unlikely distribute the edited product for final consumption at that sampling frequency, except for certain new “HD music” services listed in more detail in that referenced article.

The i-XY-L from RØDE was evidently designed to record stereo audio without recording simultaneous video on the same iOS device. In other words, the i-XY-L was designed to complement a separate video camera (or even a film camera) in a dual-system environment. I say that because the i-XY-L microphone does not point in the same direction where the iOS device’s camera points. This is not a complaint. It’s just for you to know that you shouldn’t choose the i-XY-L if you were planning to record single-system with the audio recording made in the same iOS device, i.e. with FiLMiC Pro. Beyond its unique feature of 96 kHz, the i-XY-L also has a metal casing for enhanced durability and electromagnetic interference immunity, a software-switchable 72Hz high pass filter for reduction of unwanted low frequency noise (only when used with the RØDE Rec app, to be discussed ahead). RØDE recommends the new i-XY-L with Lightning connector for use with the iPhone 5, iPhone 5s, iPhone 5c, iPhone 6 and iPhone 6 Plus, and the older iXY–30PIN compatible with iPhone 4s and earlier, as well as with iPad (3rd generation) and iPad 2.

The iRig Mic Field from IK Multimedia is designed to be used for both audio/video and audio-only recordings, since it features a rotatable enclosure that you can easily position for the best stereo image in both landscape and portrait orientations. Either way, the iRig Mic Field points in the direction of the subject that’s in front of the iOS device’s main camera. The iRig Mic Field also has an inboard thumbwheel gain control, a multicolor audio input level indicator for quick visual monitoring, and its own audio-out jack for real-time headphone monitoring. (This audio-out jack is app-dependent.) IK Multimedia recommends the iRig Mic Field for use with any iPhone, iPad, or iPod Touch that has a Lightning connector. Specifically, they are the iPhone 6 Plus, iPhone 6, iPhone 5s, iPhone 5c, iPhone 5, iPod Touch 5th generation, iPad Air 2, iPad Mini 3, iPad Air, iPad Mini 2, iPad 4th generation, and iPad mini.

The above four 48 kHz/24-bit clips were all simply trimmed and normalized before being uploaded to SoundCloud. No equalization or compression was applied. You may stream the stereo 48 kHz MP3 files created by SoundCloud, or download the original 48 kHz/24-bit WAVE files from SoundCloud.

The iRig Mic Field from IK Multimedia comes with a foam windshield, and a protective storage bag.

The i-XY-L from RØDE comes with a foam windshield and a very nice Zip Pod carrying case that can also be clipped to one of your pants belt loop so you are always ready to record high-quality stereo with your iOS device. 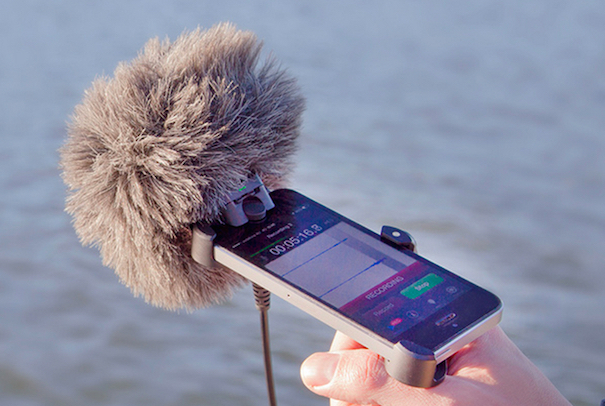 About the software: both imperfect with iOS 8 🙁

The RØDE Rec app for iOS —shown above— (which I reviewed here) wins over the IK Multimedia’s iRIG Rec, since of the two, only RØDE REC offers 48 kHz sampling frequency (an absolute must for standard digital audio for today’s digital video) and even 96 kHz (only when used with one of the i-XY mics). It is also the only app that accesses the hardware-based 72Hz high pass filter that’s inside the i-XY-L. However, despite its update to version 2.9.42 which supposedly fixes bugs with iOS 8, RØDE Rec has unfortunately become a bit unstable in my observations on a few different iOS devices that are running the latest iOS 8 update. Fortunately, it has never frozen in mid recording (so far). However, it has become sluggish to react and a couple of times has even self-quit when pressing an option. However, the RØDE Rec app is completely compatible with the competitive iRig Mic Field from IK Multimedia for 48 kHz recording, as is another app that was just released and is free, and I’ll review that one soon.

As a result, I really hope that IK Multimedia will soon add 48 kHz capabilities to its iRig Recorder app, and that RØDE will release a very good stability update very soon. In the meantime, a third unexpected and free app has appeared for iOS. It is very stable, records 48 kHz/24-bit, and is free! It turns out to be nearly perfect for one of the two stereo microphones reviewed here, and I’ll review that third-party app soon.

Of course, either of these two microphones can work directly with FiLMiC Pro for simultaneous 48 kHz stereo audio + video recording, although that only makes sense with the iRig Mic Field from IK Multimedia (not with the i-XY-L from RØDE), since the i-XL-L doesn’t point in the same direction where the iOS device’s camera points.

What is missing from both mics

Both of the reviewed mics are unfortunately missing an inboard hardware limiter, so it’s important to be conservative when setting levels. In the case of the i-XL-L, levels must be set via software. In the case of the iRig Mic Field, it has the aforementioned inboard thumbwheel gain control and a multicolor audio input level indicator for quick visual monitoring, which makes setting levels easier.

Does it make sense to purchase a stereo mic for an iOS device, as opposed to buying a digital recorder with built-in stereo mics?

I could argue both sides to that question, so instead, I’ll discuss the virtues of each.

In favor of not using your only phone (iPhone) to record

Conclusions and final comments about the two mics reviewed here

For audio-only recording or dual-system audio for video, both mics sound clean and clear to my ears, although the RØDE i-XY-L sounds more sensitive to higher frequencies, like silverware and dishes clanging. There are unique practicle features and benefits with each, as covered in the body of the article. For single-system audio and video together, the only feasible option of the two is the iRig Mic Field from IK Multimedia. If you purchase the iRig Mic Field, I would still consider also purchasing the synthetic Deadkitten from RØDE to use as an accessory with the iRig Mic Field for outdoor recordings. In fact, I would also try to see if RØDE will sell its very nice Zip Pod carrying case as a separate item. If you choose the RØDE i-XY-L, it might be for audio-only production, or with dual system together with a separate camera.

In English, click here and you will be automatically sent to the closest Amazon book page to you based upon your IP address.