The HandMic Digital is dynamic and even has a hardware limiter inboard. 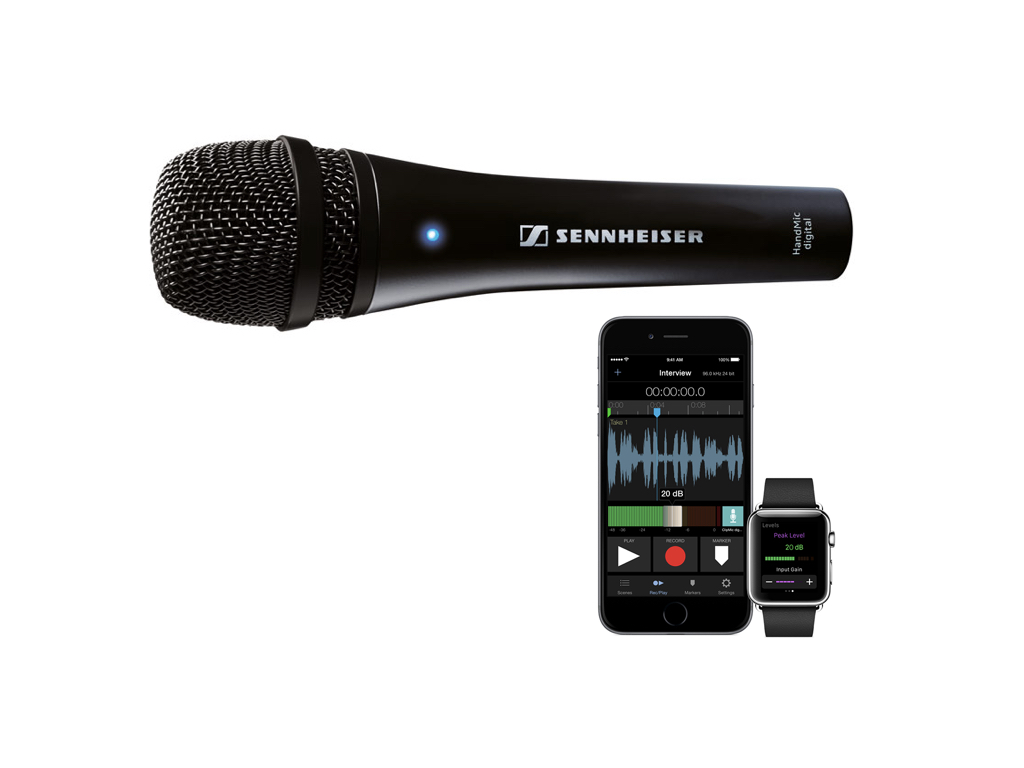 The HandMic Digital from Sennheiser is the only dynamic mic I’ve encountered that ships with a Lightning cable, since the others I have used and reviewed have been electret condenser. It’s also the only microphone I’ve ever reviewed with a switchable built-in hardware limiter, although I have tested audio interfaces and mixers which include this extremely powerful, high-end function. Strangely, Sennheiser doesn’t promote this compelling feature, so I had to perform reverse engineering to prove its existence and nature, via its behavior. The HandMic Digital has other tricks in its built-in DSP (digital signal processor) and is targeted mainly for use with iOS devices like iPhone/iPad iPod Touch, although it can also work with macOS. The HandMic Digital represents a Sennheiser partnership with Apogee, the company that builds the microphone’s built-in preamplifier and A-to-D (analog-to-digital) converter. Together with the matching MetaRecorder app from Apogee, the HandMic Digital is the first microphone I’ve ever used that allows remote control recording from an Apple Watch. Let’s explore, listen to a test recording I made, and make some tough conclusions.

On the other hand, some people prefer electret condenser microphones since they generally have a wider frequency response and a hotter output, while dynamic mics often require a stronger preamp (or pre-preamp like a Fethead). This last point is not an issue with the HandMic Digital reviewed in this article, since it contains an inboard matching internal preamp. Here is my test recording:

The sound is great for voice recordings in my opinion.

The HandMic Digital has a cardioid pattern. The advantage of the cardioid (somewhat directional, heart-shaped) pattern is that it isolates the source sound more. This means that less background sound is picked up, and (in the case of multiple microphones) there will be less spill or crosstalk, where the voice of one individual leaks into the microphone of another. Spill/crosstalk is not an issue with single microphones.

On the other hand, for informal, single microphone interviews in the field, many broadcast news organizations have long preferred using omnidirectional mics due to their forgiveness of inevitable unexpected interruptions, where directional mics often cause one of the participants to become either “off mic” (distant) or even inaudible when one of those interruptions occur.

Unlike other digital handheld microphones I have reviewed recently, which have inboard physical gain controls and LED level indications, the HandMic Digital uses software to control its inboard DSP (digital signal processor) to set the output level. These include:

Core Audio is a low-level API for dealing with sound in Apple’s iOS and macOS operating systems.

Of those mentioned above, the MetaRecorder app allows both controlling the audio level in the HandMic Digital’s inboard DSP, and recording. That is the app I used to make the test recording you heard above. I was glad to see that the MetaRecorder’s default setting is 48 kHz sampling (see my All audio production & distribution should go 48 kHz. Learn why.) at 24-bit resolution (see my Understanding 24-bit vs 16-bit audio production & distribution).

I find it ironically sad that Sennheiser has such a compelling feature in the HandMic Digital to help justify the current price of US$259 (Amazon • B&H) but does not promote it (so far). At least you and I know now! As stated in the introduction of this article, I have seen hardware limiters in audio mixers (Shure and Sound Devices) and a single (now discontinued) interface from Tascam, but never built-into a microphone in this price range. The only other microphone I have ever seen with a built-in hardware limiter is the LEA DSP Engine in the Yellowtec iXm Pro, which starts at US$761. The Yellowtec iXm Pro microphone costs nearly three times that of the HandMic Digital, although to be fair, the Yellowtech iXM Pro has a built-in audio recorder too, and I hope to review it very soon. Both Sennheiser and Yellowtec are German manufacturers, while Apogee is a US company.

If you want to use the Auphonic iOS app to record from the HandMic Digital, you should first set your gain using the Maestro app, since at publication time of this article, the Auphonic iOS app does not have Core Audio input control. I have discussed this with Auphonic, and the company may add Core Audio input control to the Auphonic iOS app in a future update. If and when that happens, you will no longer be required to open up the Maestro app just to set levels, although you will have to use the Maestro app to activate other functions, like the low cut/high pass filter (“rumble reducer”), hardware limiter (“overload eliminator”) and for future firmware updates to the mic. The same applies to recording from the HandMic Digital with any other iOS recording app (audio or video) which does not (yet) have Core Audio input control.

Control the MetaRecorder from an Apple Watch

If you own an Apple Watch, you can control the Apogee MetaRecorder from there. 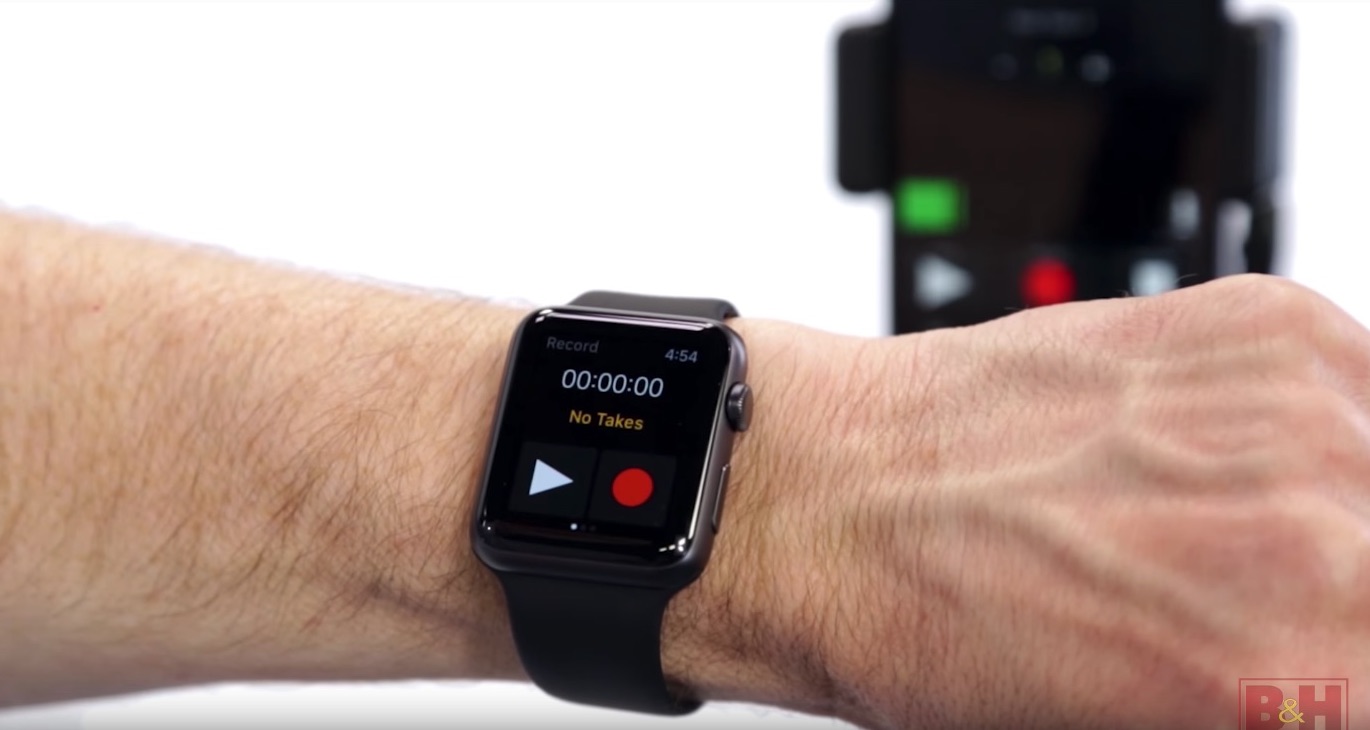 I haven’t found anyone who owns an Apple watch, so I took the above screenshot from a B&H video where Rob demonstrated the MetaRecorder with a different Sennheiser microphone (lavalier), the <US$130 Clip-Mic Digital (B&H). The MetaRecorder app behaves the same with either microphone.

The functions controllable from the Apple Watch include: 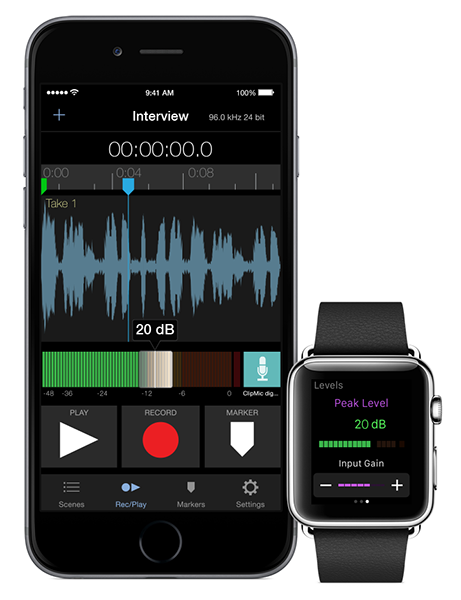 The HandMic Digital has a built-in LED for partial confidence. Unlike other devices I have reviewed, in the case of the HandMic Digital, the LED is not to see the level/gain, but to simultaneously confirm the physical connection and the proper selection of this microphone in a recording app in iOS, as apposed to an internal microphone selection in an iOS app.

What comes included with the HandMic Digital

With its inboard hardware limiter and high-quality audio, HandMic Digital (Amazon — B&H) from Sennheiser/Apogee has intriguing features for its US$259 price, especially for iOS users who also own an Apple Watch, don’t desire any monitoring or have one of the waining iOS devices that still offer analog monitoring. However the HandMic Digital is much more limiting than the <US$130 iRig Mic HD 2 from IK Multimedia (reviewed here, Amazon — B&H) or even compared with the <US$100 Sennheiser E835 microphone (Amazon — B&H ) on which the HandMic Digital is based. In fact, anyone who loves the common features of these two mentioned Sennheiser microphones could consider combining the <US$100 Sennheiser E835 with the iRig Pre HD interface from IK Multimedia (reviewed here, Amazon — B&H) and then pay much less while gaining the following advantages:

The only loss with that Sennheiser/IK Multimedia combo would be the lack of hardware limiter and low-cut/high-pass filter. There are advantages and disadvantages to each combination.

I have no inside information, but I imagine and hope that Sennheiser is already working on an upgraded model of the HandMic Digital, with inboard latency-free monitoring. I also hope that Apogee will create an Android version of its Maestro app, which would make the HandMic Digital have a larger potential market with Android users.

Be sure to read my related article: How to pick a handheld digital mic for a smartphone/tablet.