Many people ask me why I always recommend third-party tools when it comes to doing tasks in Media Composer.  The answer is quite simple.  In most cases, once something is added to Media Composer, that’s it.  It doesn’t get many major updates past the point of implementation (Titler+ is an exception to that, and the reason it’s getting major updates is that it was a complete dog when first added).  Companies like Boris FX bridge the gap between what our NLE does, and tasks we need it to do.  I did a write up recently about Continuum 2021 for Media Composer, and how it’s taken a huge leap forward for editors, with the inclusion of DFT “cinematographer” effects.  In this “In-Depth”, I want to take a look at the new release of Sapphire 2021, and what has been added for subscribers and new users alike!

Again, I’m sure that people wonder why I always add a pricing section in my reviews, but I think it’s very important as most people still associate Continuum and Sapphire for Media Composer as $2000 products, which is not true.  First, the cost to purchase Sapphire outright is $1695 US, with a free, watermarked, unlimited trial available.  As always, I always tell people not to bother with that option, as the best, and most cost effective option is the subscription, which is $495 per year.  This way you can subscribe to Sapphire for three years for less than the price to purchase, and you’ll get all the updates, bug fixes, etc for that entire length of time, as opposed to only the year of updates and bug fixes that come along with the full purchase.  I noticed that Boris FX also gives you the option of subscribing monthly for $62 per month, but that would be more for situations where you have set everything up in the trial, and only want to pay for a month or two to activate the project, render it out, and you’re good to go.  Alright, let’s get to what’s new in the 2021 update!

I want to get the smaller items out of the way first, before we jump into the new effects.

Available through all of the host applications for Sapphire 2021, Metal GPU Acceleration is now available for over sixty effects in Sapphire 2021.  The minimum requirement is macOS Mojave (10.14), but keep in mind that for the best stability and results, you should use macOS Catalina (10.15) and macOS Big Sur (11.01).  The next big question is what effects are supported, and how much time, really, will you be saving utilizing Metal acceleration.  Well, Boris FX has broken the effects down into a detailed list showing which effects are supported, and the speed increase since 2020.5.  Very helpful….if you’re a Mac user. 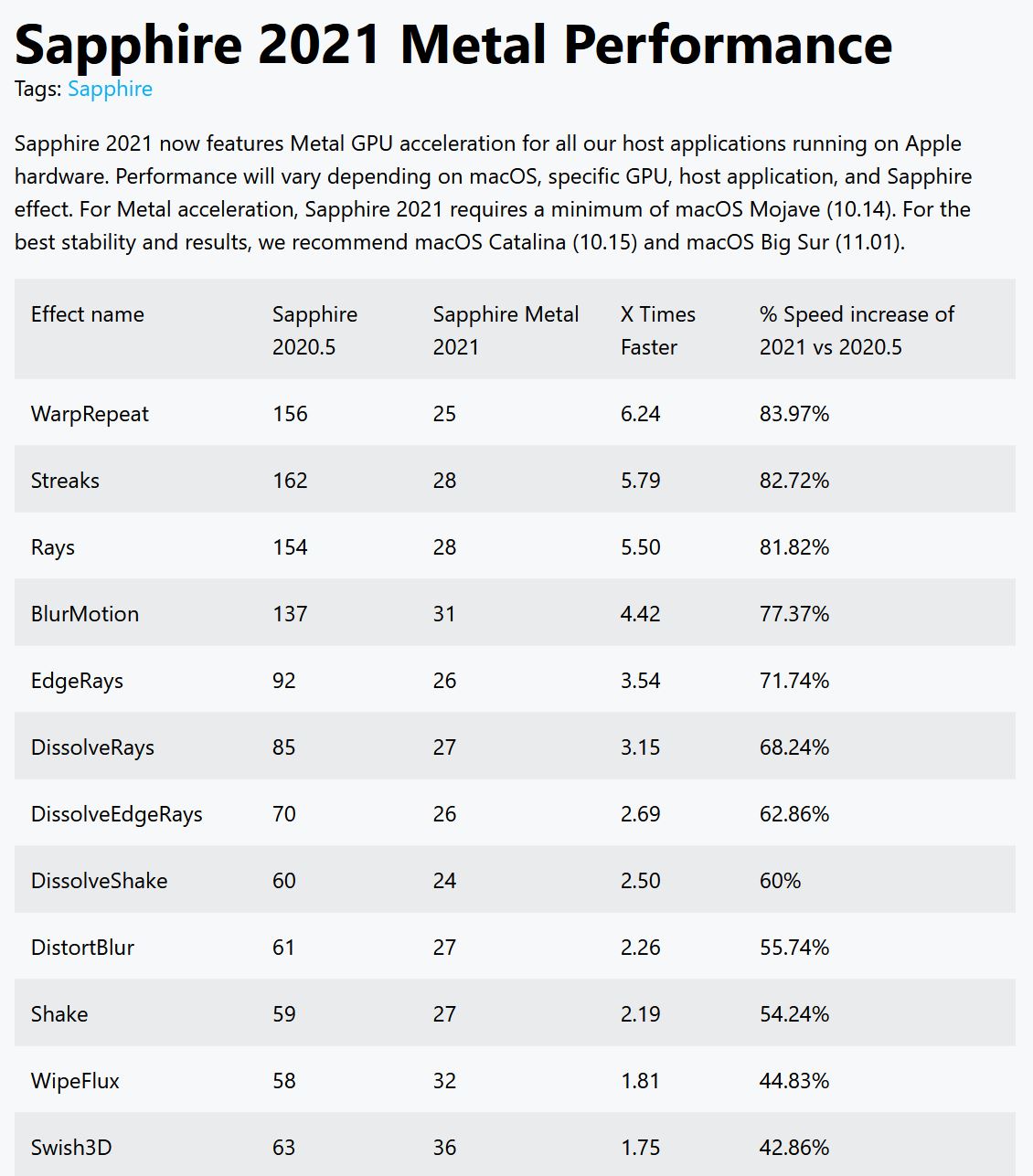 Sapphire 2021 adds two new features to the flare designer, ten new Lens Flares and 45 new presets to get you rolling! The ten new flares are the presets are fairly self explanatory.

But what about the two new actual features to the Flare Designer itself?  Well, the first thing to keep in mind is that Lens Flares are something that happen naturally, and on axis.  Meaning that, for the most part, the flare itself happens along a specific line or access, and that doesn’t change, as it’s the nature of the way lens flares happen.  Well, as designers, sometimes we like to get in and mess around with nature, and sometimes throw the elements off access, which is one of the features we’re now allowed to adjust.

You also have the ability to adjust their relative speeds, without adjusting their position or relationship to the main hotspot.

Sapphire has the best glow period.  S_Glow has been my go to glow effect for every project that I work on, no matter what host application I’m working in.  It’s simple, straightforward, and gives me the best looking glow out there…..until now.  Good by S_Glow, it was nice knowing you, as S_UltraGlow has easly taken it’s place by a landslide.  Designed to simulate an optical glow, you can start out super simple by creating a “Primary” glow that would look the way it does in S_Glow.

Now, organized in a nice, simple, logical order, you can push your glows farther than before by adding parameters like Afterglow….

As well as Atmosphere and even Highlights.  What I really like about the effect and the implementation of these new parameters, is that they follow a very logical thought process and workflow.  Start out with the standard Primary Glow and then work your way from there.  I should also point out there there twenty-eight presets for Ultra Glow to get you rolling in the right direction! 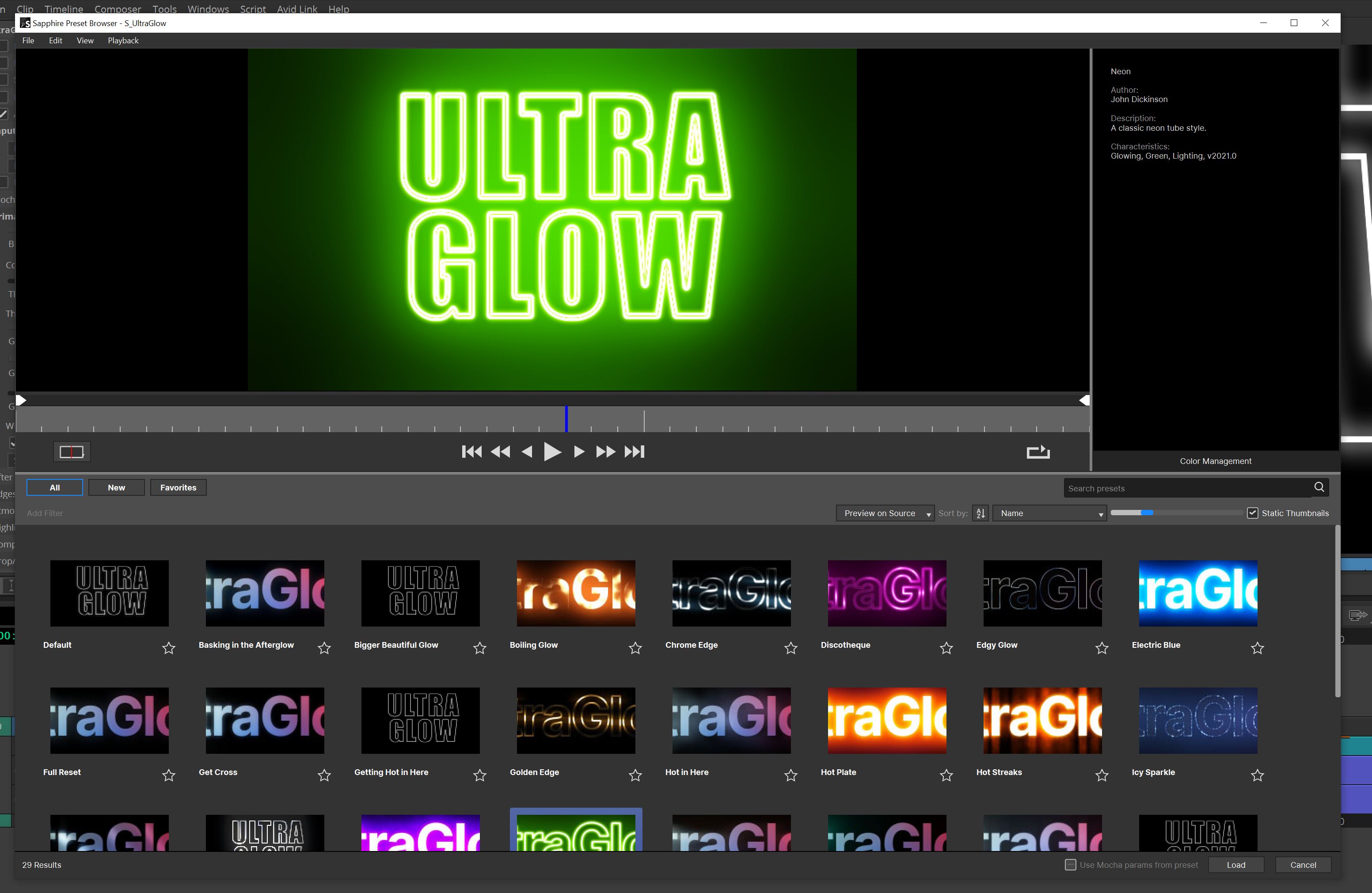 This, of course leads us to the next new effect inside of Sapphire 2021.

Zap is Sapphire’s Lightning effect (why it’s not called S_Lightning I don’t know), and if you take a look at it in the Media Composer Effects Editor, you’ll see it’s biggest update to go from Zap to Ultra Zap is to basically add the Ultra Glow parameter set into S_Zap, to make it S_UltraZap! 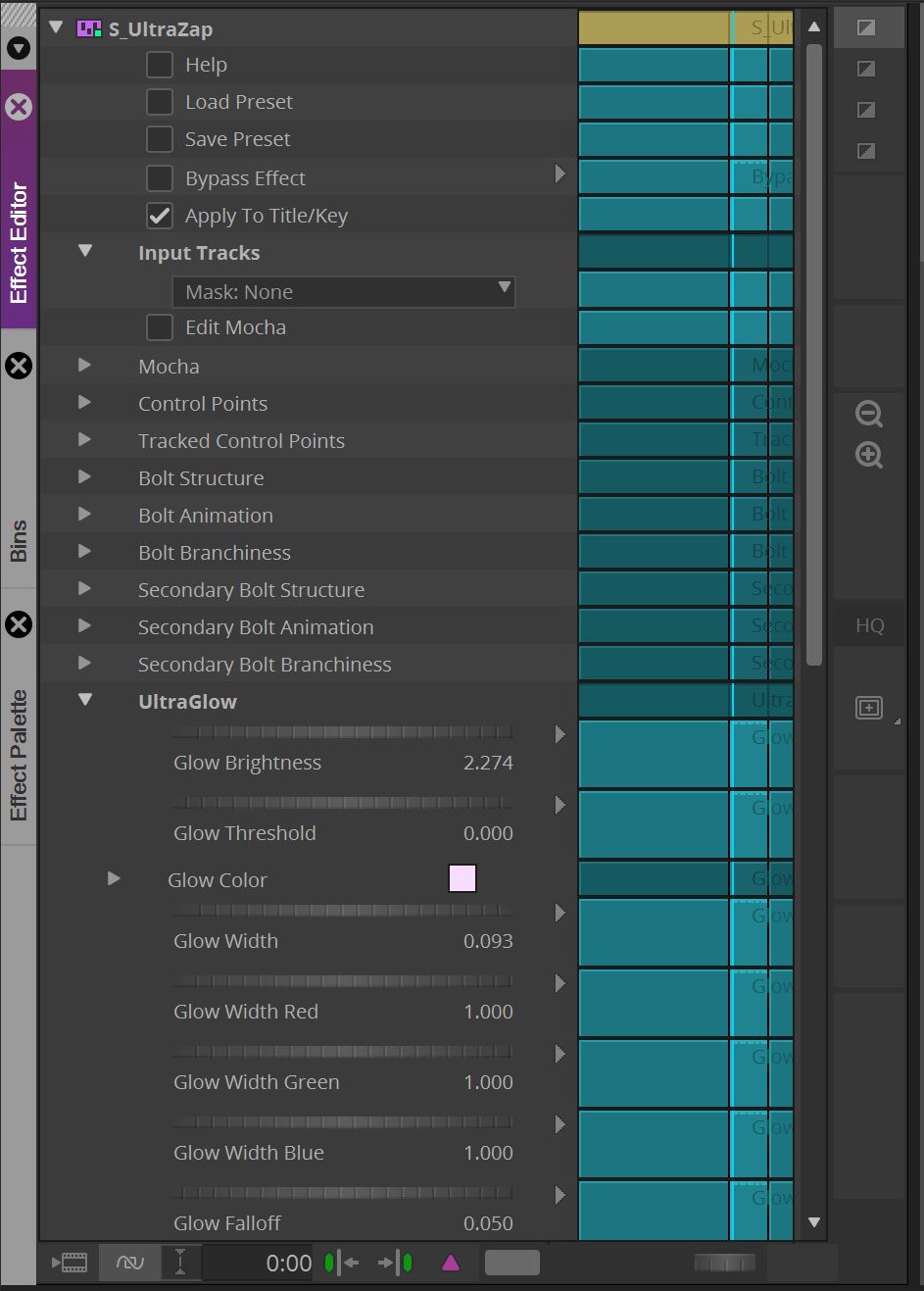 With that said, I always found S_Zap to be an overlooked effect as most people consider it to be a fairly straightforward effect, but there’s a lot of things happening under the S_UltraZap hood that I want to mention.

First of all, I’ll only be using S_UltraZap from now on, as it obviously contains not only the Zap parameters, but also UltraGlow parameters to make it a “one-stop-shop” for any type of effect I want to create with a bit of buzz!  The effect works a little differently in Media Composer, as the After Effects version has the Media Composer capabilities, plus the ability to add it to After Effects masks, which Media Composer obviously doesn’t have.  Using the effects on it’s base settings, when applied, will give you the default lightning effect with a start, middle arc point and end point. 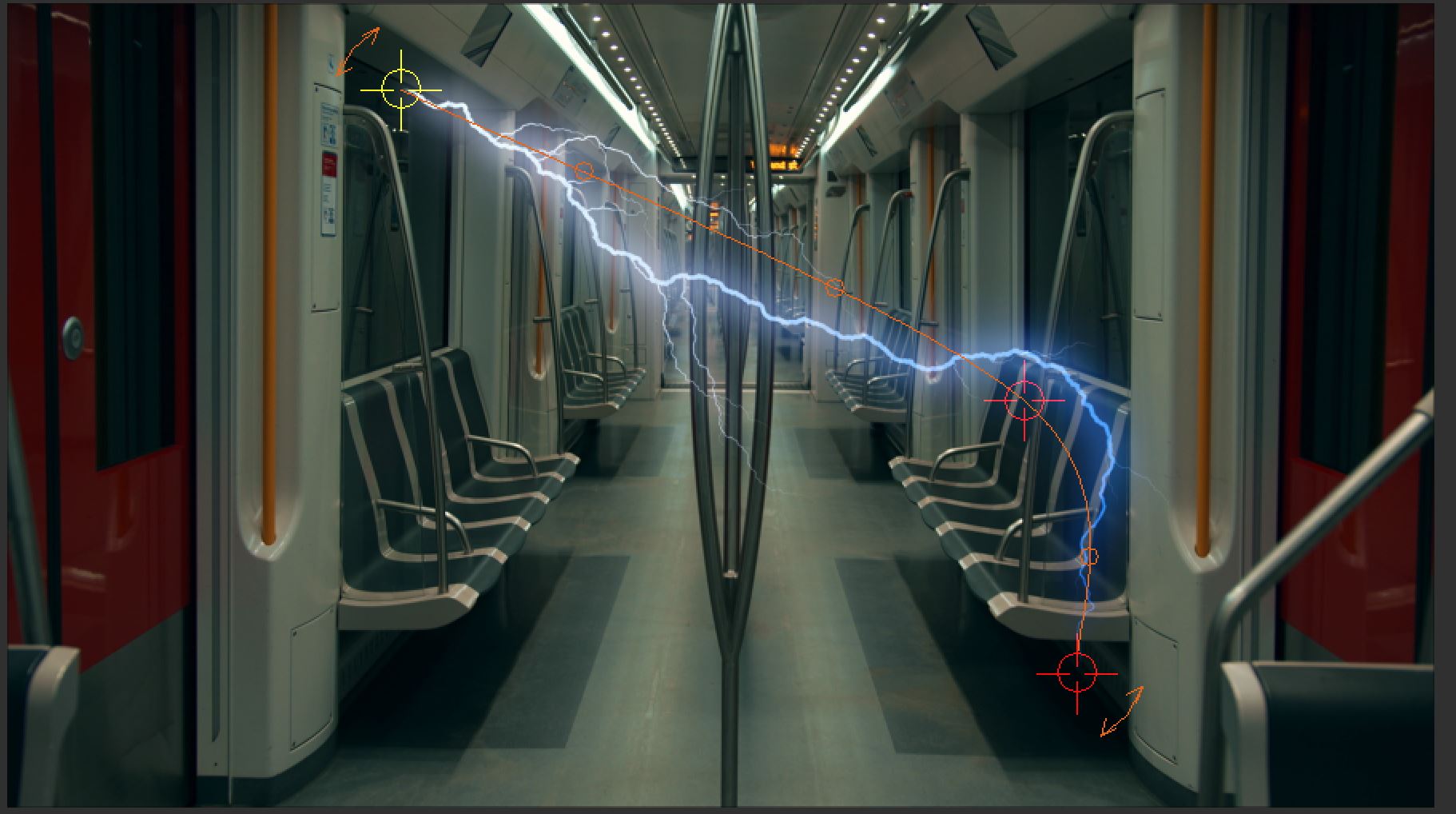 First of all, I’ll only be using S_UltraZap from now on, as it obviously contains not only the Zap parameters, but also UltraGlow parameters to make it a “one-stop-shop” for any type of effect I want to create with a bit of buzz!  The effect works a little differently in Media Composer, as the After Effects version has the Media Composer capabilities, plus the ability to add it to After Effects masks, which Media Composer obviously doesn’t have.  Using the effects on it’s base settings, when applied, will give you the default lightning effect with a start, middle and end point to give your lightning a bit of an arc.

I believe the purpose of adding the three points is to show the user that they can create fairly elaborate lightning arc’s, right out of the gate.  One thing that I really like is that you don’t have to jump back to the Effects Editor to activate any of the additional 3 points at your disposal.  You can simply grab the one you want, move it, and it will immediately activate, and be ready to animate.

At this point, you can then get in and animate the actual structure of the bolt (Width, Length, Curve, Feather, Start/End Color, as well as varying widths, endpoints, etc).  The “Structure” parameter establishes the look of the bolt itself.

It’s also animated by default, and that animation can be altered as much or as little as you like under “Bolt Animation”.  Everything from its speed to wiggle, jitter and even noise can be added or removed to get you the pinpoint look you want.

One little “hidden in plain sight” feature is the little Left/Right arrows above the start and end points.  I’ve always seen them there, but never really gave them much thought, until I started playing around with them in this article.  If you grab the one above the start point, it will rotate the start point around the end point.  If you have additional points added, they will move relative to the start point.  Take a look below.

Much like many of the effects in Sapphire, there is the ability to utilize integrated Mocha Tracking inside of the effect, and I was a bit curious as to how that would work.  Once you click “Edit Mocha”, you’re brought to the familiar integrated Mocha interface.  Once there, you’ll see the six Zap points that you had access to in the Effect Editor, the big difference is that you can track up to six (which is the max available in the Effects Editor and in Mocha) points, with pinpoint accuracy in Mocha, and then send that info right back to your Media Composer timeline super fast.

To be honest, Mocha is really what makes effects like Zap worth using.  Unless your shot was locked off, it would be a super pain in the butt to work with an effect like this, but Mocha makes the job so simple.  You can now spend all your time perfecting the look of the effect, and little to no time, setting up its movement.

IS THE UPDATE WORTH IT?

To be perfectly honest, this is the type of update I expect from Sapphire.  There are so many great effects in this package, and taking what was already great, and making it even better is what I want.  As I said before, S_Glow no more for me, I’m now S_UltraGlow for life, and as I also mentioned before, I expect that most people who are using any of the Boris FX products have switched over to the yearly subscription plan and if you have, this update is of course, included in your subscription.  Also, if you were smart to jump on the subscription train, the Boris FX team typically has a .5 update throughout the life cycle, with updates and bug fixes, so always keep an eye out on the Boris FX website, Twitter and Facebook account for updates as they become available.  Sapphire has always been the absolute best for high end visual effects in your editing and compositing application, and that really has not changed in Sapphire 2021.  For more info, and to download a free watermarked trial of Sapphire 2021, you can check it out at www.borisfx.com .

Boris FX is not paying me to write this review.  Boris FX does, however, sponsor my tutorial series on my personal YouTube channel.  This does not change my opinion of this product in any way.  All opinions posted in this article are my own.