The new UltraStudio Recorder 3G helps alleviate type 3 camera shyness, but not type 1 or 2 (yet)…

This is my review of the new US$115 UltraStudio 3G Recorder interface, which supersedes the prior UltraStudio Recorder, which is not 3G. Blackmagic lent it to me for this review and I already returned it. The 3G portion and the Thunderbolt 3 connection give the new version greater features, such as more video formats, greater selection of color space, RGB video formats and lower price of only US$115 instead of US$145. Ahead are more details, photos, screenshots, what I like and what I wish it might do with future software/firmware updates.

“UltraStudio Recorder 3G lets you work anywhere because they are extremely compact and are powered from the Thunderbolt 3 connection,”

“You can simply plug into any Thunderbolt 3 enabled laptop or a desktop computer and start working. With support for high bandwidth formats up to 1080p60 these are advanced video capture and playback solutions that are small enough to fit in your pocket. There is nothing more portable!” 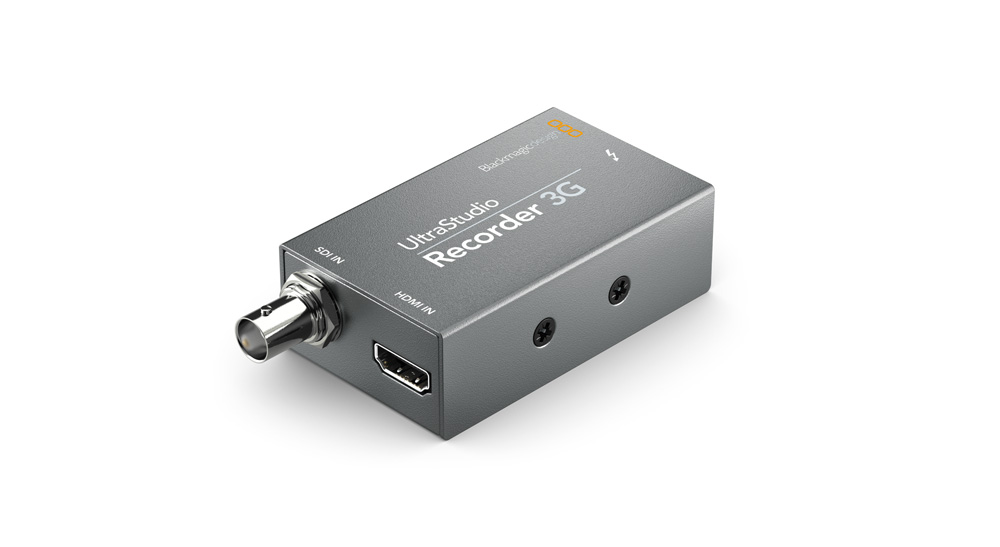 Refresher about the three types of “shy” 1080p camera situations

There are three types of 1080p shyness in cameras, in order of importance: PsF, Telecine and Doubling.

Although I have published many articles about how to deal with type 1 and 2 camera shyness in post-production, I was hoping that the UltraStudio Recorder 3G might also help alleviate at least type 1 shyness live, on the fly.

In my testing, I confirmed that the UltraStudio Recorder 3G together with the latest Desktop Video app can indeed receive and properly identify a PsF signal like 1080PsF≈29.97 as indicated in the first of the two screenshots above. (Over HDMI there is no PsF flag so it just sees it as 59.94i as seen in second screenshot above.) However, neither the UltraStudio Recorder 3G nor the Desktop Video app currently has any function to convert that PsF signal into pure progressive, which is what we really want to achieve. Blackmagic responded that this is up to the receiving app. As already confirmed by developers like Ecamm (creator of the wonderful Ecamm Live app, which I have covered in many articles), that function is not in their software either and likely will never be there. As a result, a program like Ecamm Live most likely takes only a single field and therefore only gets the equivalent of 1920×540 true pixels rather than the full 1920×1080 progressive signal that the camera actually imaged.

If you use a camera like the PXW-X70 and many other Sony cameras that suffer from type 3 shyness and you set the camera to shoot at 1080p25, although it properly records internally as desired, on its HDMI and SDI output, it doubles the framerate to 1080p50.

This is properly identified in the above screenshot taken from the Desktop Video app through the UltraStudio Recorder 3G.

Although the combination of the UltraStudio Recorder 3G and the Desktop >Video app doesn’t currently offer any way to deliver only half of the incoming frames, it is very easy for an app like Ecamm Live to use only half of them. Unlike the more daunting task of reintegrating fake video fields into their original pure 1920×1080 frames, all Ecamm Live needs to do (after we set the desired streaming rate to 25 FPS or what is currently called in the Ecamm Live menu as “30 FPS”. (This should really either be ≈29.97 FPS if Ecamm Live streams at CFR ir ≈30 FPS if Ecamm Live streams at VFR.) In any case, by telling Ecamm Live the desired framerate, all is solved quite simply.

This solution was not an option with the original UltraStudio Recorder since it did not except higher framerate 1080p signals. This is one way that the new UltraStudio Recorder 3G can help with a camera that suffers from type 3 camera shyness. So it’s a great solution for the PXW-X70 but not helpful with the FS7 at these framerates, since the FS7 suffers from type 2 shyness, not type 3.

Thanks to Diego, Francisco Javier and Memo

Wishes to be added via future software and/or firmware updates

Stand by for upcoming articles with yet other solutions to resolve camera shyness in the era of live streaming by staying on my free mailing list.