A while back, while browsing Reduser.net, I saw that someone had done an IR test and discovered that RED has a weakness when it comes to IR filtering. I did my own tests and here are the results:

Second shot: same as above, but filtration increased to ND .9 plus ND 1.2–a total of seven stops of ND: 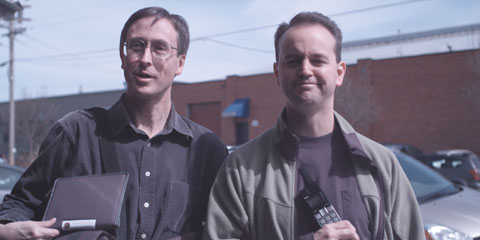 The theory is that when ND filters cut visible light to the point where the ratio between visible light and IR light is very low, the IR shows up much more dramatically than it would otherwise. Normally IR effects are overwhelmed by visible light.

I was a bit confused by this image. The darkest object in the shot–the filter pouch–is made of synthetic fibers and is bright magenta, making me think that the magenta cast in the second picture is an IR issue. But the picture has a magenta cast overall while not everything in the image is radiating the same amount of IR.

I’ve been interviewing Ira Tiffen, formerly of Tiffen, Inc. and a world-renowned expert in the creation and manufacturing of filters, for a magazine article on HD filtration that I’m writing for HD Video Pro magazine. I sent him the pictures above and asked for his expert opinion. This is what he had to say:

I am making certain assumptions which are commonly encountered. The camera has a built-in IR reduction filter. It is essentially clear to the eye, transmitting most of the light between 400nm and 680nm, which is the visible spectrum, minus the part between 680nm and 700nm. Once it reaches 680nm, the filter begins to reduce light. From 680nm to 700nm, there is a little red lost (which is why this type of filter has a very pale green cast to it), but further above 700nm there is a quickly diminishing transmission of light, all in the IR region. But there IS some transmission from, say 700nm to 730nm, causing a small ‘leak’ in IR. At some higher point, say 900nm, it may start to transmit more light again, but the camera isn’t sensitive to it.

We have to remember that the chip is generally going to have more sensitivity to light in the IR than film does. So a small ‘leak’ in light just above 700nm can be picked up as red by the camera, but with the ND 0.3 filter, at only one stop of light absorption, there is still an abundance of visible light to overpower any leak of near IR getting through the IR filter.

If the camera did not have the built-in IR filter, there would be a much greater amount of near IR light, enough to show a reddish cast on objects (usually black or dark gray) that tend to reflect more IR (remember that dark objects get hotter in the sun than lighter objects- this heat is the excess of reflected IR) and proportionately less visible light. This is why the effect appears even without ND filters when there is no IR filter in the camera.

Here’s what happened in the scene with the ND 2.1 (7 stops, 0.8% transmission) filter combination. All organic-dyed ND filters I have seen, including Schneider’s, begin transmitting an increasing amount of light from about 680nm and up. When there is no ND filter, or a ND filter not much denser than, say, ND 0.9, the amount of additional light in the far red (680nm-700nm) is proportionately too small to be seen among the much greater amount of visible light.

However, with the ND 2.1, the amount of visible light is brought down to less than 1% of the original. The small amount of near red is not affected as much because the filter dyes do not function well in that region. This is the key. So the small amount of far red that gets through is now much greater in proportion to the overall, including the visible, and so a reddish cast is created. Now Schneider ND’s tend to be cooler (read a bit bluer) which is an increase of light transmission just above 400nm, which acts to minimize the reddish cast that would otherwise show up throughout
the image.

In the ND 2.1 filtered image, there is an overall addition of blue in the areas that do not reflect much IR, like the bricks, the silver car, and most other areas. However, in the black filter case, and the gray jacket and sweatshirt, there is a greater amount of light in the far red and IR being reflected, so the reddish cast on those objects becomes enough to overpower the addition of blue that neutralized the red everywhere else.

To recap, without an IR filter the camera would suffer from an excess of red especially in objects that reflect a large amount of IR light. Even without a ND filter.

With just the IR filter, there will generally be a good balance between the visible and the near IR, so that color rendition is normal. The small amount of far red and near IR is overpowered by the large amount of visible light.

With an organically dyed ND filter that is not much denser than a ND 0.9, there is still enough visible light to counterbalance the excess amounts of far red and near IR.

With a much denser ND filter, the overall amount of visible light is reduced enough in proportion to the amount of far red and near IR getting through that there can be a reddish cast through the whole image. With a cooler ND, with some addition of blue, the color can appear normal for objects that do not reflect excessive IR. However, for those objects that do, the amount of IR is enough to still cause a reddish cast because it is then proportionately greater in amount than either the visible light or the increase in blue that worked to counteract it for parts of the scene that do not reflect much IR.

I’m extremely thankful to be able to publish this incredibly in-depth explanation of what was going on in the images above. It just shows that no matter how long one works in the industry one can never say, “Now I know it all.” There’s always more. I just love that.

“Now I’ve seen it all” is a completely different matter.

Ira Tiffen is currently working on a book about filtration. He has a publisher but no firm release date. Let’s hope it comes out in the next year or two. I, for one, am dying to read it.

I’m told by Bob Zupka, of Schneider Optics, that they have a filter, called the 486, that was designed for early digital still cameras that didn’t have any effective IR filtering and were extremely sensitive to IR. This filter has a pale pink cast, much like a UV/haze filter, and cuts the spectrum like a knife above 680nm. The cast is easily eliminated by white balancing or basic color correction. Expect to see some HD-size 486 samples at the Schneider Optics booth at NAB. I’m hoping to test one with Adam Wilt shortly thereafter. Stay tuned!