MXF, the ability to ADD and not COPY are chief among them. Oh, and PluralEyes integration.

Red Giant software has announced quite a few new things just in time for NAB 2014. There’s a new Magic Bullet Looks reborn, and PluralEyes 3.5 with the ability to correct for sync drift. But what I wanted to point out is a couple of significant new features in BulletProof 1.2.

These Red Giant updates, as of this writing, are just announced releases and aren’t shipping as of yet. In fact most of the product pages haven’t been updated either. Keep an eye on Red Giant’s press release page as it might get the official press releases soon.

I took a look at the brand new BulletProof at NAB last year. Jeff Foster recently had a review as well. In my mind, there were a couple of missing features that kept BulletProof from being anything more than a DIT in that early release … not that that's a bad thing as it is a great DIT tool but only had limited usefulness in a dedicated editor's toolkit. Version 1.2 add those two significant features: more camera support (including Canon C-series and XF-series) and the ability to ADD clip to a BulletProof catalog without actually copying the files. This is an important addition for those who might want to use BulletProof’s cataloging, metadata, color and transcode tools in a post-production environment as opposed to on-set. You probably don’t want to make yet another copy of media in the edit suite since you probably already have it backed up and on a RAID. 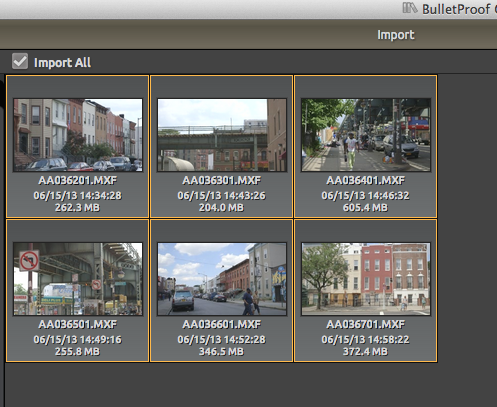 That's all MXF media from a Canon C300 ready to load into BulletProof 1.2 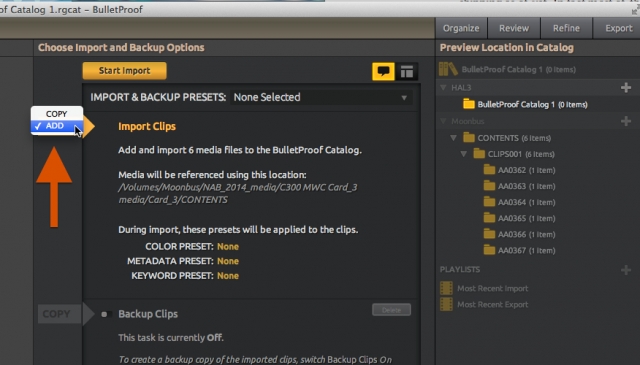 And that's how you'll ADD the media to a BulletProof catalog instead of making a copy.

We won’t get into the debate about whether the whole Catalog idea for video files is a good one. That’s something you’ll have to decide for yourself. But this idea of BulletProof as a Lightroom for video is a valid comparison and Red Giant BulletProof is offering something unique in the video space. It works well, has a lot of features and it looking toward the future with its use of metadata. It's only going to get better.

Below is the full press release about BulletProof 1.2. 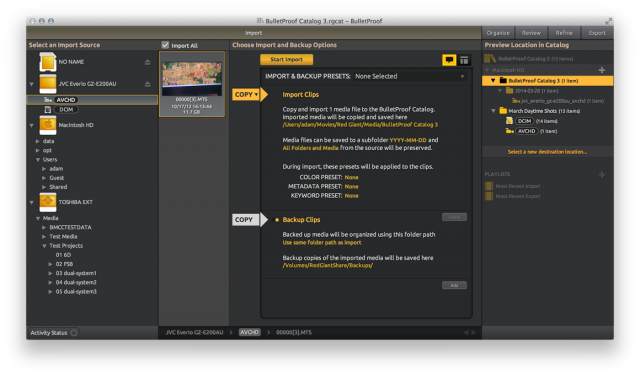 April 1, 2014 – Today, Red Giant announced BulletProof 1.2, an update that brings more camera support and other improvements to its footage backup and preparation tool.

Bruce Sharpe, Shooter Suite business unit manager said, “Last year at NAB, we released BulletProof – a product that we knew had the potential to become an essential tool for shooters. This year, we’ve updated it to support the AVCHD and Canon XF format, two formats that are a mainstay of the industry.”

In addition to the existing support for Canon and Nikon DSLRs and GoPro cameras, BulletProof now includes support for Panasonic and Sony DSLRs, and for the Canon C-series and XF-series cameras.

BulletProof is designed to solve several challenges that, since the DSLR revolution, have plagued shooters, both on set and right before post-production. One of those challenges is the issue of reliable backup.

“Shooters work under extreme time pressure while on set,” said Randon Morford, Shooter Suite product manager. “Reliable file backup is often considered a luxury. At best, most shooters simply copy their footage to a hard drive, blazing on with their shoot and hoping for the best. Too often, however, the data is corrupt and doesn’t make it to the timeline. We designed BulletProof to make sure that never happens.”

BulletProof, which boasts robust automated backup and verification tools, allows shooters to do what they are already doing, but with confidence. Once the camera card is in the card reader, BulletProof creates copies of your footage and verifies them to ensure a perfect duplication. In addition, while the footage is being backed up, the shooter can use BulletProof’s GPU-accelerated playback tools to review the footage and make sure they got the shots they need.

Also new to BulletProof is a highly requested feature called “Add Mode” – a reference mode that speeds up the import process by cataloging media that has already been copied to disk. 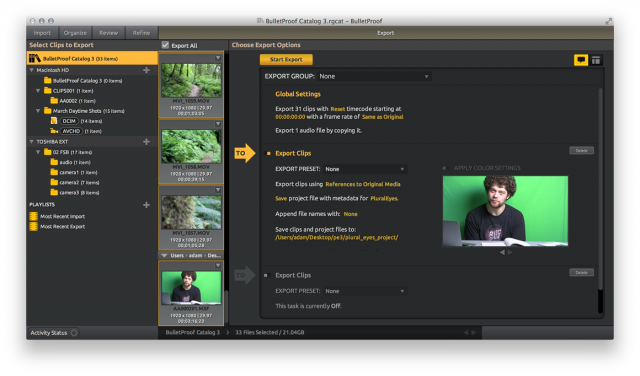 While BulletProof’s features start with backup and review of footage on set, it also addresses the next area of pain in the shooter’s process – preparing the footage and notes for post-production. BulletProof includes powerful tools for tagging, adding metadata, notes, in-and-out points, and even suggested color correction to the footage – all to help bring the shooter’s intention over to the timeline. These features can be used right on set or once the shooter gets back to the edit suite.

In addition, BulletProof is now integrated with PluralEyes, Red Giant’s hugely popular automated audio/video sync tool. One of the editing industry’s most popular tools, PluralEyes literally saves hours or days of audio/video syncing work, with the touch of a button. BulletProof now makes the process even more fluid by sending the footage over to PluralEyes in an organized way, so that you can sync your footage immediately. Once synced, PluralEyes sends the footage directly to the editing timeline, ready for editing.

“Since PluralEyes allows the shooter to work more freely on set by not having to worry about timecode or clapboards,” said Sharpe, who also created the app, “it seemed like a natural progression to have our footage backup and prep tool integrated with the next tool in the production chain.”

“For the last year we have been singularly focused on making BulletProof a better tool for people working on set and in the edit bay,” added Morford. “We’re proud to offer a product that lets the shooter work with the confidence that comes with knowing that their footage will make it home safe, sound and in sync.”

Pricing & Availability BulletProof 1.2 beta will be available soon, with a release in Q2 for $199. It is a free upgrade for existing users of BulletProof 1.0. Learn more at http://resources.redgiant.com/bulletproof-resources/.

The Red Pledge Red Pledge is Red Giant’s commitment to customer happiness, with no purchasing hassles. Learn about the Red Pledge guarantee at www.redgiantsoftware.com/redpledge/.

About Red Giant Red Giant is a software company made up of talented artists and technologists who collaborate to create unique tools for filmmakers, editors, VFX artists and motion designers. Our company culture is focused on finding balance between work and life – we call it “the double bottom line” – this philosophy helps us ignore complexity in favor of building simple tools that yield giant results. Over the last decade, our products (like Magic Bullet and Trapcode) have become the standard in film and broadcast post-production – with over 200,000 users, it’s nearly impossible to watch 20 minutes of TV without seeing our software in use. From our experiences as artists and filmmakers, we aspire to not only to provide tools for artists, but inspiration as well. Watch our films, learn from over 200 free tutorials, or try our software at www.redgiant.com.