The St. Louis Rams have celebrated victories and suffered losses during the 2013 football season thus far—however, videos produced by the Rams Broadcasting Network are always a big win. The network creates everything from videos introducing cheerleaders and players, game-winning plays, interviews with coaches, and more entertaining content that make it fun to be a fan. Video Manager Chris Slepokura sat down to tell us more about the Rams’ content strategy and how the videos are produced for broadcast, online, and mobile delivery using Adobe Creative Cloud software. 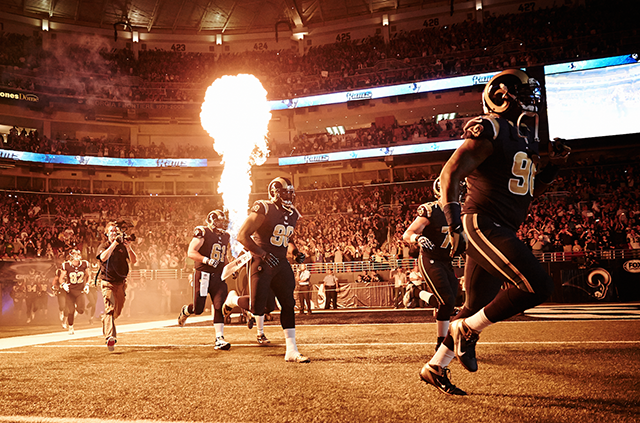 Adobe: Tell us more about who you are and what you do.
Slepokura: I’m the Video Manager of the Broadcasting and Creative Department we call the Rams Broadcasting Network. We produce content for the web, in-game video boards, and three TV shows that are air on our local affiliates. All of this content is edited with Adobe Premiere Pro CC. We also use Photoshop CC for photo editing, After Effects CC for motion graphics, and Illustrator CC for graphics, logos, and so on, to make it all happen.

Adobe: How long have you been with the Rams?
Slepokura: This is my fourth season with the team. I was brought on as Video Producer to help build out a fledgling broadcasting operation. Over the past three years, we’ve grown tremendously. From just me acting as a lone editor to now seven workstations and six editors we have the ability to create amazing content our fans can enjoy.

Adobe: Can you tell us more about the content you're producing and how Adobe Premiere Pro fits in?
Slepokura: Our main focus is TV content because we produce three shows. To create the content, all assets are stored in a centralized server that each workstation can connect to. We use Premiere Pro and import media from our server in raw format. We previously used Final Cut Pro, and we had to constantly import and wait for a while for media to transcode to ProRes. That pain is gone now, because we can import into Premiere Pro immediately without transcoding. It makes the workflow much quicker so TV shows are ready to go sooner to make deadlines. 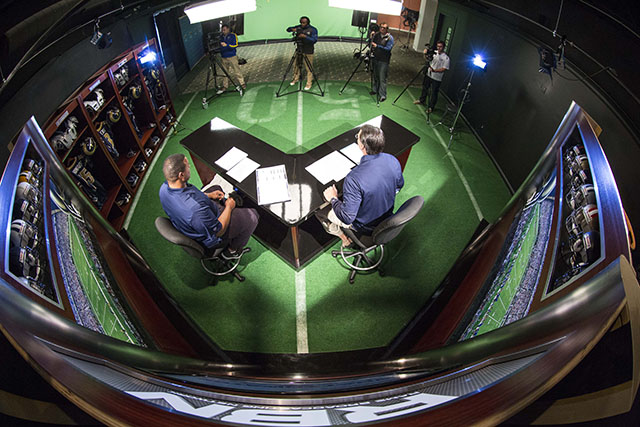 Adobe: Can you estimate how much time you are saving now that you’ve moved from Final Cut Pro to Adobe Premiere Pro CC?
Slepokura: We ingest media at different times, but I would estimate the entire production team saving about two hours per day. Even if we saved just an hour a day, that time ads up. We all shoot, ingest, and edit. If we have a home game on a Monday and we shoot a ton of footage, then it takes longer to ingest, so consequently we’re saving more time on those days. Regardless, just working with raw files in Premiere Pro saves a ton of time. We can also sketch out and present ideas and discuss them with my boss on the spot. He’s always accessible and amenable to a lot of back and forth. Adobe software makes it possible to be more immediate, not to mention very fun, loose, and collaborative. That brings out the best in everyone.

Adobe: What cameras do you use?
Slepokura: We have a RED EPIC and also shoot on Canon EOS C100s and C300s. They are all digital, cinema-based cameras. To make things look different, we also use a camera slider, jib, Contour helmet cams, and other cool equipment.

Adobe: Tell us more about the TV shows. What type of content do they feature?
Slepokura: Rams 360 is a sports documentary that follows a week in the life of a player. It recently won three Emmy awards (Editor-Sports, Audio, Sports Regularly Scheduled Program). Another show is RamsNation, a magazine-style program with five segments that may include a wired segment with a player or coach, a community appearance, or a fun interview with a cheerleader. The third show, What to Watch, is a type of pre-game show in the studio with hosts and a ton of graphics and highlights. These are typically shown on FOX Sports Midwest, our local FOX network, and our local FOX/CBS station. We repurpose the content for the website as well. 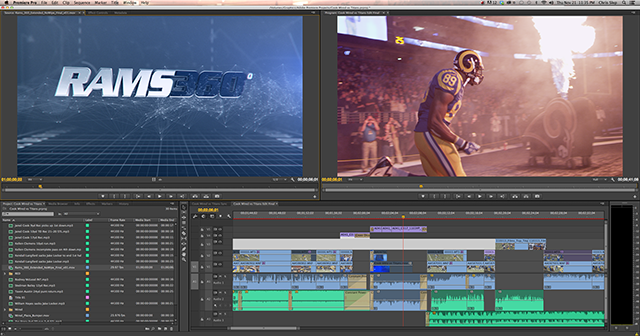 Adobe: Tell us about the in-game footage. How quickly are you putting things up?
Slepokura: We come to each game with pre-produced material: graphics, highlight videos, interviews, cheerleader profiles, opening videos, and sponsor elements. There are 22 time-outs in football and those breaks need to be filled with our best creative content. While the fans are watching the video boards our production team is filming our next “Wired” segment and also capturing b-roll for Rams360.

Adobe: How are you using other Adobe applications?
Slepokura: Our motion graphics designer uses After Effects and Photoshop a ton, as well as CINEMA 4D to create 3D graphics. The integration with CINEMA 4D in After Effects CC has been a great addition. The workflow is a lot smoother.

Adobe: What do you like about working with Adobe Creative Cloud?
Slepokura: Creative Cloud lets us easily access all the applications we need on all seven of our connected computers. We love it because it is so much easier to download the software via the cloud than use a disc and worry about licensing complexities.

Adobe: What future plans do you have?
Slepokura: We want our videos to reach more fans so we can gain new fans. Give them access to their favorite players so they can connect with them on a more personal level.

Adobe: Compared to what other teams do, is what you’re doing typical?
Slepokura: I don’t know what every team is doing, but we’re trying to be cutting-edge, and I believe we are. Keeping things in-house, and utilizing the newest and latest technology keeps our content fresh.

Adobe: How does your schedule change from in-season to off-season?
Slepokura: Off-season, we are not producing the same deadline-driven TV shows. Instead, we are stockpiling content for the shows: building graphics for in-stadium; graphics for TV shows; or doing lots of pre-production that goes on creating new elements for the season. It is not the same workflow, so it’s a little bit of a breather though there is still a lot to accomplish before the season begins. NFL Draft, Scouting Combine, mini-camps, community appearances, etc., are events we cover in the offseason. So, the good news is, the fun never ends!