February 17, 2011 – This Reader Quicktip explores FCP’s extended markers and making subclips from them

This Reader Quicktip comes from Final Cut Coach. It involves using the markers and the extend marker option in Final Cut Pro. Plus there’s discussion of using markers to makes subclips. Final Cut Coach also has its own site that looks to be a growing Final Cut Pro tutorial site.

I like to use markers when cutting one long shot such as a sporting event or a stage performance into smaller, usable clips.
I place a marker where the quarterback plants his back foot before throwing the ball. Then I watch the play until the receiver
catches the ball, at that point I press Option-` (grave) to extend the duration of the marker to include the entire action. 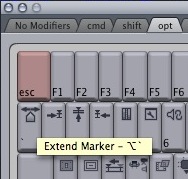 Anytime you add a marker to a clip, the marker is stored in the disclosure triangle for the clip it was created from. In the browser,
open the disclosure triangle next to the original clip to see all your newly added markers. Select the markers and drag them into
a bin of their own. They will immediately be transformed into sub clips ready to use in your sequence. Rename the sub clips to
reflect their content and you’re ready to build your sequence. If you don’t use duration markers each sub clip will begin at the
frame of the marker and it’s duration will last until the beginning of the next marker.

I like to see tips that make use of subclips. I’ve seen editing debates that have argued for and against subclips but personally I use them a lot. There’s some pretty deep keyboard commands in this tip too with the Control + Option markers playback commands.