I get these emails from “Sara at CrumplePop”, spruiking all sorts of clever plugins for FCPX. Normally I resist the shiny-shiny, protecting my wallet from harm and my effects folders from clutter, but this one caught my eye:

EasyTracker is a plugin that lets you quickly track the motion of objects in your video.  You can see it here:

For the next week, you can get EasyTracker for $49.

This I had to see. Fortunately CrumplePop’s plugins are freely downloadable and usable in demo mode; you just get a red X across the image if you haven’t paid for it.

EasyTracker gives you two plugins, a point tracker and a planar tracker:

Reasonably painless video tutorials on CrumplePop’s site show how they’re used: drop ’em on the background clip, put the clip, still, or title you want to track to it (a.k.a the Follower) in a hidden (invisible) compound clip on another track, set up your tracking points, and let rip. (You want to use a compound clip to ensure that timeline edits are respected. For example, if you trim the head of a follower clip, it’ll play from the trimmed start in a compound clip, but if you use the clip on its own, it’ll play from frame zero, no matter how you trim the head.)

Here’s the control panel for the point tracker: 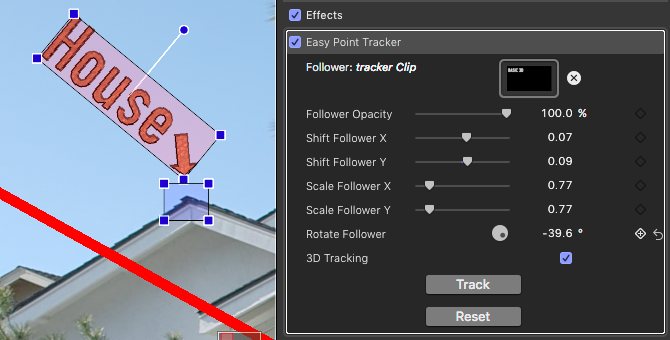 The tracking point is the area in the blue rectangle. Your follower appears in the red rectangle, and can be rotated, scaled, repositioned with respect to the tracking point, and varied in transparency, and all these parameters are keyframeable.

The planar tracker has similar controls:

There’s only one onscreen rectangle to deal with. You corner-pin the rectangle (which needn’t remain rectangular in the process) to the target, and that’s where your follower winds up.

Again, you can shift and scale the follower, but it’s always contained within the tracking rectangle: you can’t track a small area and paste a larger follower on top of it.

Position your elements, hit Track, and wait a short while for the motion to be analyzed… 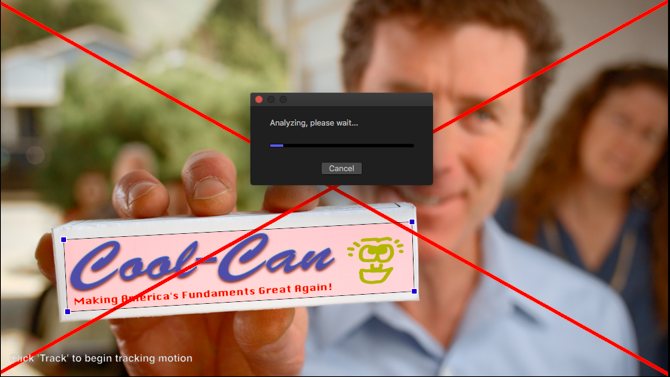 Hey presto: label replacement with basically no effort (you can probably guess how much effort I put into it from the quality of the new artwork, a PNG built in Pixelmator):

So: dump mocha, After Effects, Motion, and Resolve? Not quite; there are a few limitations. I purposely threw some nasty tracking tasks at it to see what would happen, and here’s what I found:

Based on a couple hours of fiddling, EasyTracker looks useful for simple tracking tasks where the quality of the tracked area doesn’t change for the duration of the clip, and where you’re tracking in hard-edged quadrilateral graphics or video, or an FCPX title. EasyTracker follows a very Apple-like philosophy: as long as it works, it works great, and it’s almost criminally easy to use. But if you need to get any deeper into the weeds, you’ll need a deeper tool.

Have a look at the tracking tasks in CrumplePop’s demo video; those are the sort of things that EasyTracker is perfect for.

Am I being critical? No; after all, it’s called “EasyTracker”, not “mocha Pro“. The point of these plugins isn’t to give you cinema-quality subpixel-positioned tracking of difficult shots, but to supply cheap ‘n’ cheerful tracking quickly and easily within FCPX, without having to hassle with finicky details in another app or manually keyframe a track. If you do need to hassle with finicky details, there’s always Motion, or AfterEffects, or mocha Pro—but if you just need a speedy track, and the background clip is reasonably consistent for the duration, EasyTracker is both easy and quick.

I’m not trying to convince you one way or the other, just letting you know about a tool that might save you a lot of time if this is the sort of thing you need to do a lot. Download EasyTracker yourself and play with it; see if it’ll work for the typical tracking you do. If you like it, it’s on sale for $49 until at least 24 January, and $99 thereafter.