Like a bridge over troubled waters, ClipWrap will now be the cure-all for AVCHD’s multiple weaknesses for many Mac video editors, at least in the short term. 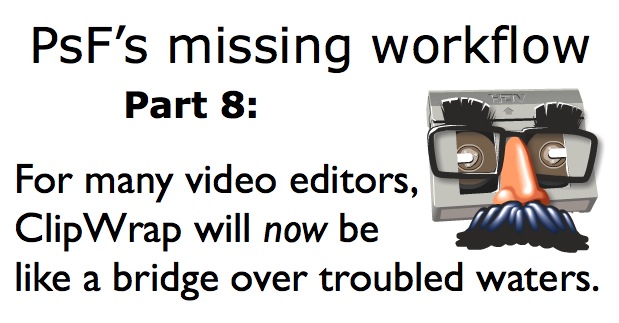 In parts 1-3 of the PsF’s missing workflow series, we introduced the terms benign PsF & malignant PsF, and revealed the PsF status of several professional AVCHD cameras from 3 manufacturers (Canon, Panasonic, and Sony). In #4, we did the same with several HD video recorders from 6 different manufacturers. In #5, we revealed how one recorder manufacturer is offering its own “Band-Aid” software to counteract the inappropriate signals offered over HDMI by many camera manufacturers. In #6, I published an open letter to all pro AVCHD manufacturers. In #7, I covered how to deal with PsF on a progressive sequence in Premiere Pro CS5.5. Now in #8, I’ll reveal how the US$49.99 middleware known as ClipWrap will be the cure-all for all of AVCHD’s multiple weaknesses, including both types of PsF, at least in the short term.

For all of the details, please read (or review) parts 1-7 of this PsF’s missing workflow. In the meantime, here is a short review of those AVCHD weaknesses:

In part 6 of the PsF’s missing workflow, I requested all professional AVCHD camera manufacturers (Canon, Panasonic, and Sony) to offer a professional UDF option in their camera menus, where they would format their flash media as UDF and record standalone long-GOP H.264 files as a single file per clip (not sequential files per long clip), and without unnecessary folders and subfolders. (There were several other requests in that letter.) While I hope they add these improvements to their current or upcoming long-GOP H.264 camera models, ahead you’ll see a cure for all of the AVCHD weaknesses mentioned above, plus some more features too.

Like a bridge over troubled waters, ClipWrap will now be the cure-all for AVCHD’s multiple weaknesses for many Mac video editors, at least in the short term.

ClipWrap is what I call middleware, because it acts as a bridge between the mess of sequential files, subfolders and potentially misinterpreted PsF (25PsF and 29.97PsF) into straightforward files that are recognizable both by the latest video editing apps, as well as the older ones with no problem. As the name indicates, in its default mode, the ClipWrap program re-wraps the original entangled H.264 files into straightforward .mov files. Shortly after releasing the very first articles in the PsF’s missing workflow series, I contacted Colin McFadden at Divergent Media to see whether he could add support for malignant PsF files to their US$49.99 ClipWrap product (which already handled benign PsF files properly), since I knew that if he did, ClipWrap would go from being a very good product to a “grand slam”. I had previously read that Divergent Media was vehemently opposed to adding a de-interlacing feature to their ClipWrap product (which I applaud) so I was careful to explain in my request/suggestion that I was not requesting de-interlacing, but just proper identification of all types of PsF (benign and malignant) in the resulting file as progressive, while continuing to identify the truly interlaced files as interlaced. Colin requested an example file of malignant 29.97PsF which I immediately supplied (thanks to Jorge Koechlin and Rafael Alarcón for that footage). I was surprised how quickly Colin sent me a ßeta version of ClipWrap to try it. I determined that ClipWrap was now capable of properly identifying the following types of AVCHD files:

I determined that the only type that ßeta version ClipWrap couldn’t yet recognize as progressive were the malignant 25PsF clips from Canon (PF25), so Colin asked me to send him a sample 25PsF file, which I did (thanks to Jorge Mezéi, from Buenos Aires, Argentina). After receiving it, Colin updated the ßeta version, and I subsequently verified that the updated version now recognized all types of AVCHD PsF files properly, and the resulting .mov files were recognized as progressive in all of the editing programs with which I tested it, including Adobe Premiere (even older versions) and FCP X. Although I don’t have Avid Media Composer, Colin does, so I trust that it appears properly there too. The only place where the re-wrapped H.264 files don’t appear as progressive was in VideoSpec (since VideoSpec looks at another part of the metadata), but the most important thing is that the progressive files be recognized and treated as progressive in the editing programs, as they now are.

But beyond the good news about the fact that as of public version 2.4.5 (and later) ClipWrap now properly handles all types of AVCHD with all types of PsF, let’s talk about ClipWrap’s other wonderful functions and benefits. If you are a Mac video editor who receives AVCHD footage with malignant PsF exclusively (or malignant PsF together with any other type of AVCHD footage), ClipWrap is the tool you should be using to transfer footage from the camera or flash media card to your disk array, for several reasons. Here are the nice things that ClipWrap will do (or can do, optionally) in the process of transferring your footage (in its default, rewrap-only mode): 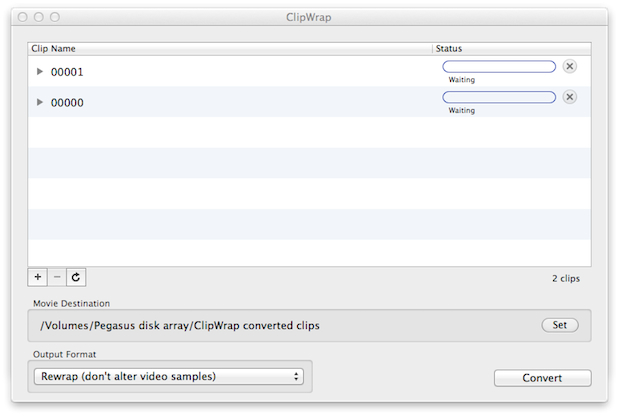 Thankfully, ClipWrap has a very simple user interface, and as a result, there is likely nothing that you could possibly do wrong when using it. Perhaps the most important thing to do when first opening the ClipWrap program is to set the Movie Destination folder, which is easily seen and adjusted at the very bottom of the ClipWrap window. Next, it would be good to set the preferences to your taste, most of which I covered above. To select the raw footage, you can use any of four methods:

In any of the four cases, it’s best to grab the highest level AVCHD folder (not the actual MTS files) so that ClipWrap can use the metadata to treat the footage the best way possible and (if appropriate) rejoin spanned clips that were forcibly divided by the FAT32 monster in the camera.

If you have a very recent editing program that edits H.264 natively (and if your computer is also fast), then you’re probably best served by using the default mode of Rewrap (don’t alter video samples), since this will be much faster and the video file sizes won’t multiply. If your editing program is not good at editing H.264 natively (i.e. FCP 7 or earlier) or if you have an older, slower editing system, them you may want to use one of the offered transcode options on the list, which currently include most flavors of Apple ProRes (all but ProRes4444), and Avid’s DNxHD (if installed). This is a good time to mention that at least as of publication time, ClipWrap will even run on PowerPC Macs, so ClipWrap can help you stretch the life of both your older hardware and older software while making them compatible with AVCHD, although it will take much longer and take much more drive space if you transcode.

Apple App Store? May you install ClipWrap on all of your Macs?

The current version of ClipWrap as of the publication date of this article is 2.4.6 and is sold exclusively via the Divergent Media website. However, the EULA (End User License Agreement) does allow you to install it on multiple Macs for the price of one. It is possible that a future version of ClipWrap may be sold via the Apple App Store, but the current one wouldn’t be allowed there due to some QuickTime tricks it does.

Sorry for our Windows readers, but Colin tells me that there isn’t any plan to offer ClipWrap for Windows. If any reader knows of a similar app for Windows, please write it in the comments below. In the meantime, you should know that you can use ClipWrap on a Mac to rewrap (or transcode files to Apple ProRes or Avid DNxHD), all of which can be read on a Windows machine.

Why did I say “at least in the short term”?

I wrote “at least in the short term” for the following reasons:

In the meantime, if you are a Mac editor who receives AVCHD footage (especially with malignant PsF or AC-3 audio), or a Mac editor with an older system (with older software and/or a PowerPC Mac) and are receiving AVCHD footage of any type, ClipWrap will likely be your inexpensive bridge over troubled waters.