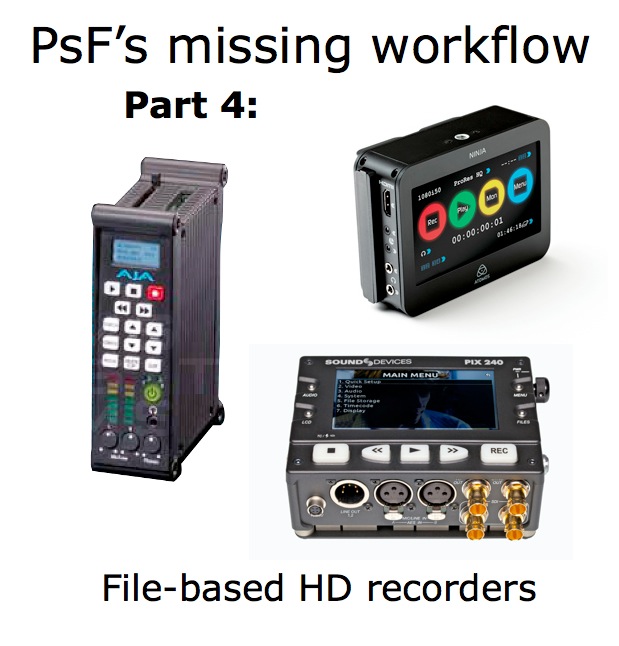 File-based portable HD recorders exist nowadays basically for two reasons: Either to make a superior recording than that could be possible inside of a camcorder’s own recorder, or to record the output of a video mixer (“switcher”), whether be it superior or equivalent quality to what might have been recorded internally in the cameras used. When I say superior, I mean either a 10-bit recording instead of an 8-bit recording, a 4:4:4 or 4:2:2 recording instead of a 4:2:0 recording, or a less compressed (or uncompressed signal). When I say that a recorder goes “up to” 10-bit, what I mean is that it records with 10-bit quality as long as the source being fed is truly 10-bit, not a 10-bit signal which has been derived from an 8-bit signal, as I have covered in more detail in several prior articles. When fed a signal that is 8-bit (over HDMI) or 10-bit derived from 8-bit (over HD-SDI), the recorder makes a 10-bit recording that has 8-bit quality.

The terms benign PsF and Malignant PsF were introduced in Part 1 of this series called PsF’s missing workflow.

Recording from an HD-SDI source

Some portable, file-based HD video recorders have both HD-SDI inputs and HDMI inputs, some only have HD-SDI, and some only have HDMI inputs. When connected via HD-SDI and receiving signals already designated as 23.976PsF, some of the recorders with this type of signal will automatically know to record the signal as pure progressive. However, when receiving 1080/25PsF or 1080/29.97PsF over HD-SDI, the recorders have no way to distinguish them from interlaced signals, so if you intend to record 1080/25p or 1080/29.97p, you must go into the recorder’s menu to request it (if the seting exists). Otherwise, you’ll end up with the negative side effects of Malignant PsF described in Part 1 of this PsF’s missing workflow series. The way to make the request of the recorder varies among manufacturers (if possible at all), as I’ll cover ahead in this article.

Recording from an HDMI source

Portable HD video recorders that record from HDMI (or those which have both types of digital inputs, when using the HDMI input) currently have a tougher time than HDMI technology should already permit. Even though the HDMI standard supports native 23.976p, native 25p, and native 29.97p, I have yet to find any camera (consumer or professional) that supports any of those signals over the HDMI output. All cameras that I have seen unfortunately output malignant PsF. The camera manufacturers generally cite their concern about monitor compatibility. In other words, they are afraid that the monitor you might connect via HDMI may not be capable of receiving native 23.976p, native 25p, or native 29.97p. I don’t really know why they (the camera manufacturers) don’t handle it the way many Blu-ray players do. Many Blu-ray players either interview the monitor via EDID (“Do you speak 23.976p?”) or have it as a menu setting. That way, they can send pure progressive if the monitor accepts it, and only send PsF if the monitor does not accept it. On the other hand, Sony Professional created special PsF modes for HDMI, as I covered in detail in my recent article, Untapped features in Sony NXCAM’s new HDMI output. However, to my knowledge, none of the many portable HD video recorder manufacturers is yet supporting Sony’s special mode. Apparently, it takes quite a bit of development time. As a result, some of the recorders that receive PsF over HDMI are unfortunately recording malignant PsF, and others are able to reverse the pulldown to make a true progressive recording, but only after being specifically requested by the human operator. Ahead are some examples.

Some file-based HD recorders and their PsF status

Note: This is not intended to be a complete list.

Upcoming articles in this PsF’s missing workflow series will reveal the different workarounds with several software programs, and my conclusions about this situation. To be sure you don’t miss any articles, sign up for my mailing list here.