The CUE-D75 is small, light, affordable and unique

I prefer the V-mount battery world over gold mounted batteries because of all the variation and innovation you find among V-mounts. A great example is IDX’s CUE-D75 battery (73 watt/hours, at $218 at B&H), which I came across when I was looking to power a variety of gear (a smaller camera system, a wireless director’s monitor) while keeping battery size small and weight low.

I prefer the V-mount battery world over gold mounted batteries because of all the variation and innovation you find among V-mounts. A great example is IDX’s CUE-D75 battery (73 watt/hours, at $218 at B&H), which I came across when I was looking to power a variety of gear (a smaller camera system, a wireless director’s monitor) while keeping battery size small and weight low. 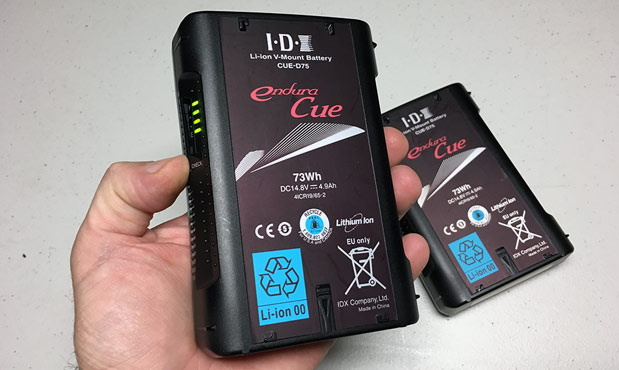 The CUE-D75 is just 1.5” thick, so it’s noticeably slimmer than my old Anton Bauer Dionic HC batteries (2.3” thick), as well as most brick batteries I’ve worked with lately from makers like Switronix, Broadcast Camera Batteries and others. I really like that svelt quality for keeping a camera rig or director’s monitor easier to manage in tight spaces. 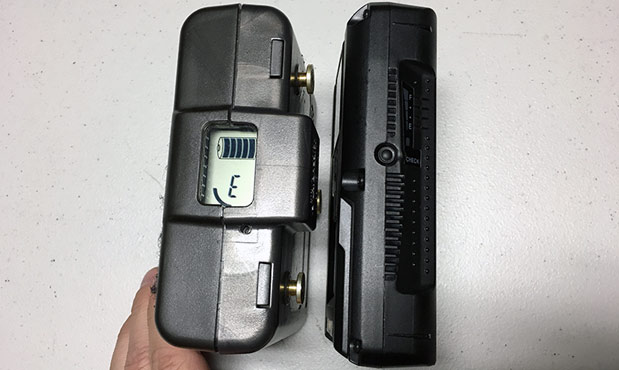 The slim D75 compared to my Anton Bauer Dionic HCs. The HCs are old, but plenty of newer batteries are just as portly.

Of course, at 73 watt hours, the D75 doesn’t have quite the same wattage of those bigger, 90+ watt batteries. That’s the tradeoff you make, and I wouldn’t recommend the CUE-D75 for running a power hungry camera like a Red or Alexa, because those cameras would suck the battery dry in about hour (faster it’s powering accessories too), and probably put a stressful load on the battery’s relatively low, 5 amp capacity. But smaller, less hungry cameras like a Sony F55, Canon C300, C100, the new Sony FS5, and others would be well-matched to the D75, getting three or more hours out of it, along with powering an accessory or two like a remote follow focus or wireless transmitter. You can see a list of estimated run-times with common cameras right here.

(Note: if you are powering your camera from the D75, just make sure you keep an eye on the battery’s charge level if your camera doesn’t warn you when an external battery gets low. The D75 does have a 4 position LED charge indicator button, but it doesn’t blink or beep if the battery is about to run out of juice entirely. If that happens while recording, you could end up with corrupted footage. Since the D75’s battery level indicator only shows 4 segments of charge, you’ll want to be conservative with running the battery down once it hits its last 25% segment).

GREAT FOR A DIRECTOR’S MONITOR

I also found that the D75 is a great option for a wireless director’s monitor. I’ve been using a director’s monitor for years, but got tired of powering the rig from two different batteries (one for the monitor, one for the Parallax Arrow receiver), and finding myself changing batteries (one or the other) up to 6 times during a day. Also, when I was ready to upgrade my rig’s monitor and its wireless system (from a SmallHD AC7 to a new 702, and from a Paralinx Arrow to a new Ace) my old batteries weren’t compatible with the new gear.

So I switched to Wooden Camera’s Director’s Monitor Cage, which is designed to accept a brick battery like the D75. And now I power the entire rig from a single D75, which lasts nearly 5 hours, and requires only one battery change throughout the day. Also, when I again upgrade my wireless monitor years from now, I’ll still be able to power it from the standard V mount D75, instead of having to start from scratch with whatever batteries the new monitor and receiver may expect.

COST VS OTHER BATTERIES

One last benefit to using a CUE-D75 battery is cost, at least in some scenarios. Compared to other brick batteries, the D75 isn’t quite as cost effective as some bigger 90 watt batteries. For instance, an Anton Bauer D90 battery is just $235 at B&H (remember that it’s huge and heavy, though) and IDX’s own CUE-D95 battery is $258. So for a few dollars more than the D75, other brick batteries can give you appreciably more wattage. But the D75 looks like a bargain when you compare it to the native batteries of smaller camera systems from the likes of Sony or Canon, especially when you consider that the D75 includes a p-tap for powering accessories. It’s a better value than the Canon BP-955 battery, which is roughly 38 watts and costs about $150, with no p-tap to power external gear. It’s an even better deal compared to the Sony BP-U30, which ships with the new FS5 camera and delivers only 23 watts for about $145 (again, no external power). Of course, these brand-specific batterie are much smaller and lighter than the CUE-D75, and require no battery plate or rods to mount on camera. But for just a little more money, the D75 gives 2x or more wattage, can power other accessories, and will work with a variety of other gear for years to come. 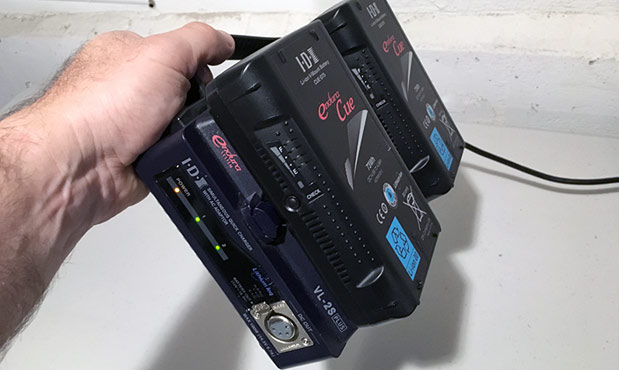 The VL-2SPLUS charger weighs only 2.5 pounds, and can sit or stand. It has a handle for easy carrying, and can act as a power supply for cameras via its XLR plug.

And if you do opt for the D75, IDX has a few chargers—dual and quad—that work well with the battery, and that you can buy in kit form with two or four batteries. My favorite charger is the VL-2SPLUS, which is a 2.5 pound dual charger that can simultaneously power two D75s in under 2 hours and 30 minutes. At about $610, it’s not cheap, but its speed makes it a great option for field work (there’s also the VL-2PLUS which costs under $400, but charges one battery at a time and takes 3 hours per battery). If you need to charge 4 CUE-D75s at once, I would recommend IDX’s VL-4S, which can charge up to 3 depleted batteries in a bit more than 2.5 hours, and do 4 together in 3 hours flat. It costs about $870.

I’ve been using a couple of CUE-D75s for several weeks to power a Canon C300 rig with follow focus and wireless transmitter, as well as a wireless director’s monitor rig. The batteries strike a great balance between useful wattage, small form factor and low price, and are truly unique among brick batteries.