Life is a Beta Test

There are many of us in Hollywood and beyond who depend on the dependability of Avid’s Pro Tools digital audio workstation.  Many of us have been using it for many years and in many different hardware and software iterations.  Studio owners like myself, wade in slowly as we take the plunge, in time and money, to upgrade all of our tools.  We all know that the old adage is right – If it ain’t broke, don’t fix it… I know people who are still running their rigs off of the discontinued TDM Mix systems and even the old Digi 002 hardware.  By running these systems they are in older Macs, Power PCs not Intel chipsets, and running not only old versions of Pro Tools software, but also running the required old versions of the Mac OS.  Behind the times yes.  But still working.

Upgrading is never simple.  It’s near impossible if you are running a busy facility with multiple bays, many different projects, and a continuing series of deadlines and audio deliverables for clients.  The cost of new computers and approved hardware devices, not to mention the upgrade fees of the software you are using to edit and mix with can be a daunting prospect.  Then multiply that by six or seven systems and you can see why so many places still use their reliable “old” systems.

A facility that I work out of in Santa Monica, 48 Windows, has decided to take the deep plunge into the new hardware.  They are currently running Pro Tools versions 8, 9 & 10 in various bays, each dedicated to specific tasks.  When Apple announced the new Mac Pro computer, the chip speeds and thunderbolt 2 and USB 3 ports brought it up to the most current specs of today’s power computing.  Unfortunately, as they have done in years past, Apple completely changed the hardware.  In the new iteration of the Mac Pro they’ve eliminated the hardware card slots required by professional users like myself.  This is a serious issue for power users even though today’s chipsets and operating systems are remarkably fast and have room for lots of fast RAM.

For the work that we do at 48 Windows the systems need at a minimum two PCI slots – one for the new Pro Tools card, HDX, and one for a video graphics card since the work requires frame accurate, high definition video playback for sound editing, mixing and for client review.

Eric Garcia, the owner of and chief engineer of 48 Windows, made the executive decision to buy the new Macs and the required expansion chassis for the bay’s upgrade.  This could be done with an older Mac Tower which does have the two required PCI slots available in it, thereby eliminating the need for the new chassis, but in the long run Eric understands that this would be only an interim solution.  So he has been patiently waiting for Magma to start shipping their newest thunderbolt 2 expansion chassis.   It is now shipping and we’ll look into this a bit more in a minute. 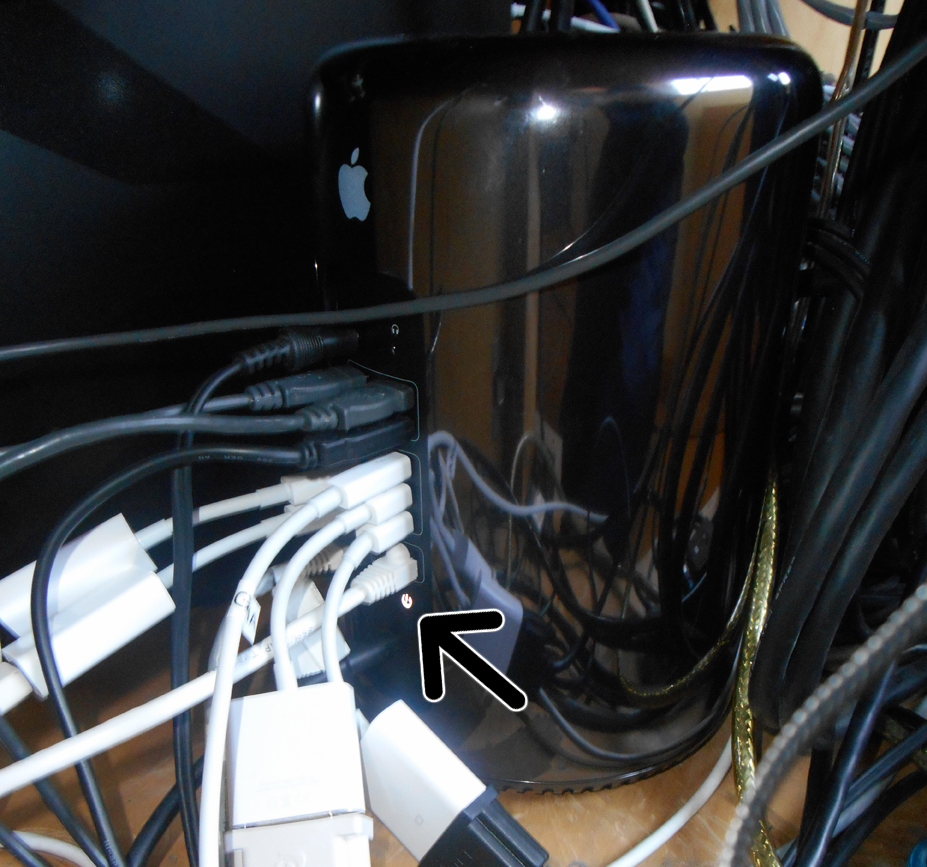 With the elegant design of the new Mac (yes – tongue is firmly in cheek) you can see here a view of the new system installed into the bay.  The system requires several dongles for authorization, hence a number of USB hubs.  Every thunderbolt port is being used and other devices are daisy chained for even more.  The required PCI expansion chassis also has 8 removable drive bays as well as the three PCI card slots for additional card hardware.  The Magma Chassis is designated as the ROBEN-3TS and utilizes the Thunderbolt 2 protocol.

There are a number of issues with the computer design.  One immediate issue is that since computers and equipment typically crash and need a hard reboot, the power button is located in an awkward place.  It is located below the spaghetti of cables and adapters at the bottom of the machine.  In a professional space such as 48 Windows, keeping the machine on a desktop or place in arms reach is not only impracticable but also, unfortunately, not particularly esthetically appealing. 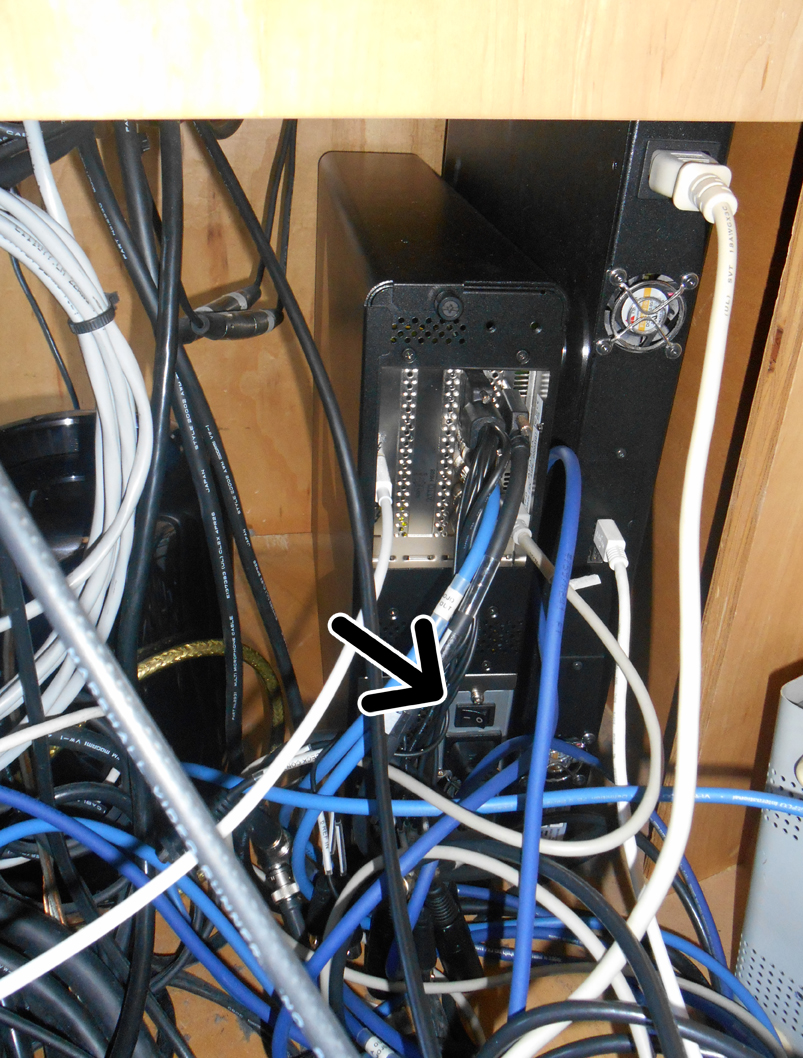 The Magma chassis, which has hard drives, the Avid HDX card and the Blackmagic card, has its power button located on the back of the unit.  Not particularly practical if it is rack mounted in a studio and requires rebooting.  I’m sure that in time, when drivers and systems become more reliable, it can be rack mounted, but currently it resides as you see in the photo.  The answer to the next question is yes – both the computer and the chassis have had the need, multiple times on a daily basis, for power cycling.  Since this system is, as far as Avid is concerned, a beta test, there have been many freezes, hard crashes and re-boots.  Eric was told that the computer is not Pro Tools qualified, the OS is not Pro Tools qualified and the chassis is not Pro Tools qualified.  Testing the waters in beta can be a deep wade in time….

Once the equipment was put in place in the bay, appropriate cabling was strung and the software was all duly installed, the next phase began… making it all work.  Besides the current impracticality of the power switch, the chassis also ran too hot to be put in a rack unit.  This ended up being OK since we needed to reach the power anyway as it turned out. It was moved from the rack and placed next to the Mac and has been running cooler since. However, now the side wall of the desk is semi-permanently removed to allow immediate access to the power buttons of the computer and to the chassis as well as to provide more air to the units.  Keeping the machines cool is imperative since noisy fans are not welcome on a mixing stage.

Additional hardware items in the install included an Avid HD I/O, an Avid Sync HD box, the Artist Mix control surface, a Dangerous monitor controller, and a Blackmagic Decklink 4K video card. Besides the Pro Tools software, iteration 11.1.3, there was also lots of software installed as well.  There were the installs for the drivers for the chassis and the video card and their accompanying software packages.  There are also many required Pro Tools plug-ins needed as well like – Waves, Dolby, iZotope and other essential post production audio go-tos.  The EuCon software, which drives the Artist Mix, has been spotty in this software iteration.  It is a useful device but, at least with this software version, 3.1, communication with the unit is hit or miss.

As is typically the case with new installs, problems began immediately.  No video would play, the chassis would lock up, spinning beach ball on the computer and hard crashes.  That first weekend turned out to be a long one…  The “complimentary” call to Avid tech support was immediate and…amusing.  Between Eric, Pat Schneider, (48 Windows longtime tech and installer) and myself we’ve probably installed more iterations and versions of hardware, software, OS and computer types than most folks ever have, over the past couple of decades.  Having been down these roads many, many times before we had already done many of the support call’s many suggestions.  We quickly reaffirmed that we were in “beta test” territory. 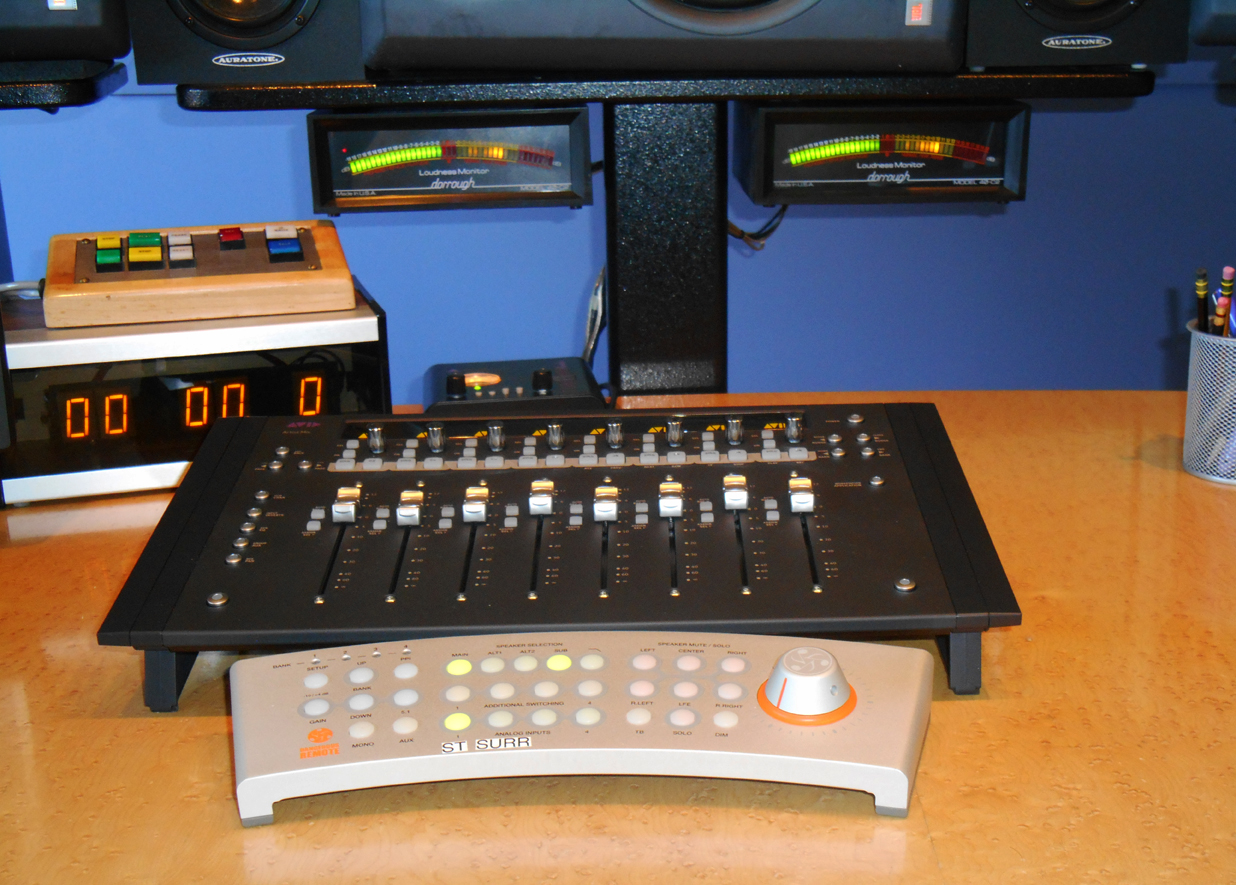 None of these problems came as a surprise to us.  Having done this many times in the past we were prepared for the worst.  Backup plans included older machines from 2012 to replace the new Mac “tower” and the chassis.  Other computers lined the walls to replace this beta test.  At the end of the day we needed that bay to be working because the work load, clients and deliverables did not change, on a daily basis, no matter what we did to the room.

However, we were determined to give it a try.  We have used many “unqualified” systems very successfully over the years.  And frankly, the “qualified” systems we were using were no longer efficient and powerful enough to do the work.  It makes sense that Avid can’t qualify every hardware and plug-in iteration of the Pro Tools software since there are so many variations.  For us, there is no turning back, and certainly as time moves forward there will be many versions of this exact system we’ve installed now in use.  In fact, many versions of this same system will be in use extensively at 48 Windows.  The bay that I use, Studio A, the subject of this post, became ground zero for our own in-house beta testing.  Even though there are issues to be sure, we have not reverted back to the system it replaced.

There are a number of hurdles to jump before things become  completely stable.  We discovered that the drivers and software for the Blackmagic cards are troublesome.  A quick search online shows the exent of the issue.  Blackmagic assures us that a fix is in the works.  We had originally installed Pro Tools 11.1.2 and that has already been upgraded to iteration 11.1.3 which is now installed.  The AAX plug-ins are amazing, sound great, make good use of the system resources and work like a charm.  Not all of our go-to plugs are AAX format yet, but they are coming.  The Pro Tools 11 hardware and software are a substantial upgrade.  Complex sessions that made the HD Accel system choke are no problem at all with the new system.

Always, there is something strange with computers and digital.  I refer to it as voodoo.  After a bit of time the electrons all seem to start flowing in sync and things just start to work.  True to form, this has been the case in Studio A.  After a rough couple of days… things just… started working fine.  Yes, there are still many errors to be had.  The typical Avid Pro Tools error code – xxxx, still rears its ugly head.  Its funny that the coders take the time to code in a cryptic error message that still does not tell you what the culprit can be…but I digress….

The power of the new version of Pro Tools 11 is undeniable.  They’ve taken a wonderful program and updated it to make full use of today’s hardware and computer abilities.   Many things like 64 bit computing and automatic delay compensation are now part of the system and the HDX card processes the audio much more efficiently.

In my interview with Tony Cardiddi from Avid we spoke extensively about the new Avid Marketplace.  There are many innovations like multiple streaming, session sharing and other things that will now be possible based on the Pro Tools 11 platform.  Once this system is as stable as the older systems they will be rolling out these enhancements as part of the 11 platform.  Its been a long time coming but the new horizons are very exciting.

In the meantime I’ll keep my head low, keep the power buttons handy and keep getting my edits and mixes out to clients.  And even with the occasional lockup with the new system I’ll smile as I remember my AudioMedia II card in my old Quadra that ran at a stunning speed of 25 mhz.  Moving on might be painful but please… I’m not willing to go back…. 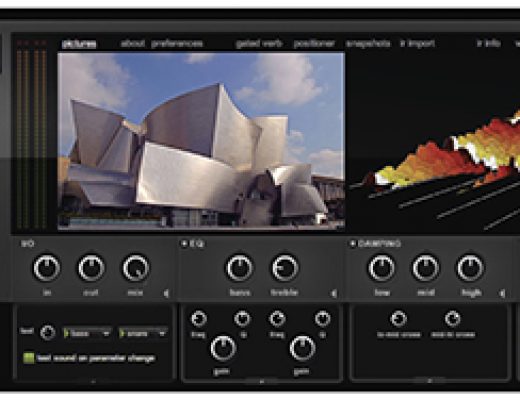