Premiere Pro CS5 has been a successful release by any measure and many people have come to know about the Mercury Playback Engine. What’s been less clear is what the MPE really is and what it means for users of both Mac and PC.

So to begin, it makes sense to start with defining what MPE is. It is NOT(!) just about hardware GPU acceleration.

Todd Kopriva recently did a run down on MPE, CUDA and what it means to Premiere Pro. You should give this page a peak and then come on back. By the way, Todd is a great resource and his blog is a great page to bookmark.

Now, lets get specific on the Mac and some of the questions I’ve gotten over the last several months:

Q: Can I use Premiere Pro on a Mac?

YES. Shockingly (at least to me), there is still a portion of users that are not aware that Premiere Pro is available today on a Mac. It is worth noting that Premiere, which started 20 years ago, originally started on a Mac. It’s been written from the ground up three times including the current 64-bit CS5 version. With CS3 (our first re-write), we returned to the Mac in response to customer demand and delivered the first Mac version of Production Premium, which is the primary product that contains Premiere Pro today.

Q: Is Premiere Pro 64-bit ‘native’ or ‘optimized’, because I hear there is a difference?

Premiere Pro CS5 on a Mac is a 64-bit native application and all of the benefits that this implies. Premiere Pro and After Effects in the CS4 timeframe were 64-bit ‘optimized’ meaning they could address more than 4GB of total memory, but did not do much beyond that. As a side note, Adobe Media Encoder is also 64-bit native.

Q: Do I need an NVIDIA graphics card (GPU) to be able to use Premiere Pro CS5 on a Mac? All of the new Macs (both towers and laptops) use ATI graphics cards and I’m on a budget!

Let me be very clear about this answer – ABSOLUTELY NOT! This is a big one. As much as I absolutely love NVIDIA technology and what it can do for our users, it is not necessary for running Premiere Pro or any other CS5 application. Remember: the MPE is a combination of three technologies or features, but you don’t have to have all three in order to use it. If you get a Mac Pro tower and it has an ATI card, you’re still getting two-thirds of the MPE technology and it will still run rings around FCP7 or any other software NLE in terms of how many video streams and effects you can run in real-time. Why? It’s the 64-bit goodness and memory addressing that makes up Premiere Pro, After Effects, Photoshop and Adobe Media Encoder.

I’ve been accused of being an Adobe marketing weasel because Mac users and particularly FCP users think that Premiere Pro can’t do it’s magic without a great GPU card. In particular, many FCP users feel that a GPU is essential in order to edit and playback challenging temporal codecs such as those found on Canon DSLR and AVCHD cameras. Nothing could be further from the truth! 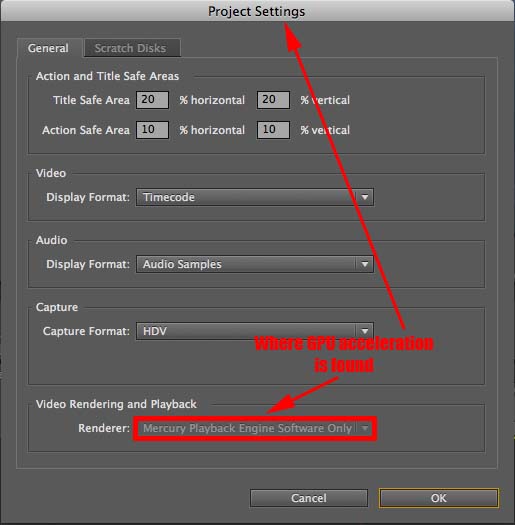 Q: Okay, if Premiere Pro on a Mac doesn’t need a GPU to actually edit AVCHD and DSLR footage smoothly, then what DOES the GPU add to my editing system?

The NVIDIA graphics card provides processing of effects that you apply to your clips on the timeline. Once you understand and process this, you’ll come to this conclusion: Having an NVIDIA GPU gives you the ability to balance the load between different computing components. If effects like color correction, dissolves, etc. can be moved over to the GPU, then that means the CPUs have more headroom and ability to focus on what they’re good at – decoding video and playing it.

Q: If I have the other two aspects of MPE, what does that really give me?

The 64-bit native nature of the application allows Adobe to utilize all of your CPU cores (and virtual ones) much more effectively than with a non-64-bit application. How many cores do you have? Wouldn’t you like to be able to use all of them?

The ability to address far more than 4GB of total memory with an application also means that large projects or projects that contain After Effects Projects, Photoshop documents and the like will continue to perform well. To my knowledge, current Macs (early 2011) can address up to 32GB of total memory. As you can see from this picture, Adobe applications recognize others that are open and can more effectively share or release to another application. In the case of After Effects, you can also reserve a number of CPUs to remain outside of its domain again allowing other applications to work well (not just Adobe). So, if you have 16GB of memory, you can effectively use it all and recognize performance gains as well.

Many popular applications are 32-bit only and can only address up to 4GB of memory. As we’ve quickly moved to HD, 2K, DSLR, RED and even DPX files, the ability for a professional 32-bit application to deal with this kind of media en masse has become an increasing challenge. Take it from us, we went through it!

Q: I need to work with other FCP editors and so I need to use ProRes. That means I can’t use Premiere Pro for those kinds of projects can I?

You can use Premiere Pro CS5 and cut ProRes all day long.

The first scenario is really easy. If the other editor has cut ProRes with FCP, he only needs to export his timelines as XML and give you the media. As long as your Mac (or PC) includes the ProRes decoders in QT, you don’t need anything else to edit ProRes on a Mac. While Premiere Pro CS5 doesn’t explicitly give you ProRes presets, it is very easy to create them. 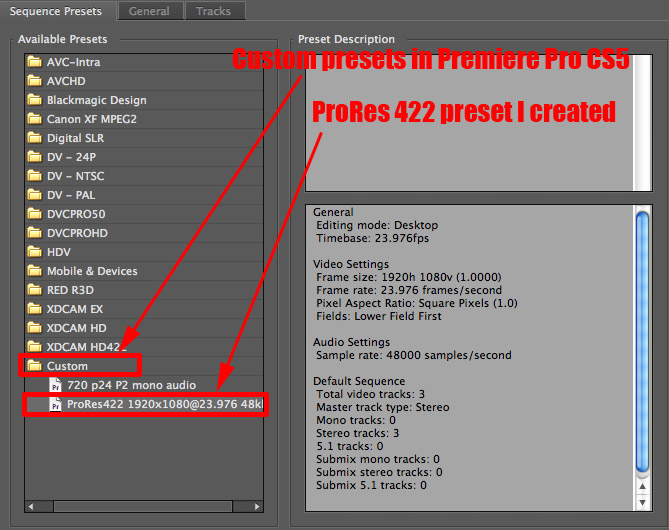 The second scenario is almost as easy. However, you will need to be on a Mac and have FCP installed. If you know you’re going to hand off to a FCP editor and need to use ProRes – then use Premiere Pro and Adobe Media Encoder (AME) to create another preset to transcode that footage to ProRes. One thing that a lot of Mac users don’t know about AME is that you can create a watch folder that will automatically convert anything you drop there to your chosen codec. This is a 64-bit, multi-threaded, background process that allows you to work on other things even as it’s churning through the media. From there, do your edit and hand your FCP buddy an XML and pristine ProRes when you’re ready.

Q: Apple is using ATI and a similar technology to CUDA called OpenCL. Will Adobe embrace OpenCL in the future?

When CS5 was under development and I showed the Technology Sneak Peek, OpenCL wasn’t even ratified or finished. CS5 wouldn’t have had GPU acceleration at all had it been based on OpenCL. Even today (March, 2011), we don’t have a lot of real OpenCL applications. Adobe is continuing to evaluate OpenCL for future development but today Adobe’s GPU acceleration technology is based on CUDA from NVIDIA.

One final note for Mac users. There is a great group of passionate Premiere Pro users that have developed a PC-based benchmarking system. They have been open to developing a Mac-based one, but don’t have the knowledge and Macs to get it done. Want to find out how your Mac really stacks up? Volunteer by going to Premiere Pro Benchmark CS5 site.