Imagine some of the world's most progressive snowboarders risking their lives to shoot in beautiful remote locations-all cut to great music. This year, Burton Snowboards chased winter to produce an original film to kick off the season, inspiring both core riders and newcomers to the sport. The creative production company behind this year's project is Popular, a studio recognized for originating authentic athlete, personality, and lifestyle- driven creative for film, commercials, and branded entertainment. The award-winning partners of Popular-David Tindale and Jeremy Pettit-sat down with Adobe to share their experience switching from Final Cut Pro to Adobe Premiere Pro CS6 software to put together 13, Burton's action-packed film for 2013.
{C} 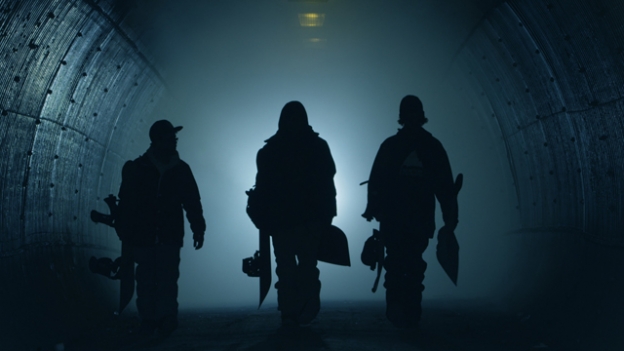 Adobe: Tell us about the film.
Tindale: The 45-minute film is Burton's primary marketing vehicle for the 2013 season. The purpose of 13 is to inspire all snowboarders to get out and ride. Burton is iconic and steeped in heritage. Our goal was to create a film that represents snowboarding today, showcasing the creativity of each team rider and how they progress the sport in their individual ways. The film premiered in eight cities around the world and was released on iTunes, DVD, and Blu-ray. The premiere tour continues in local Burton stores and dealers eventually finding its way to every local shop's TV – all 4,300 of them. 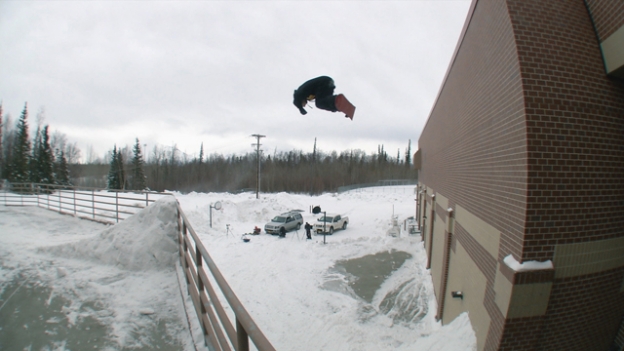 Adobe: What was Popular's role?
Pettit: This was our second year directing a film with Burton. We worked six film crews, chasing snow and terrain to film some of the most progressive snowboarders all over the world, including Danny Davis, Mikkel Bang, John Jackson, Mark Sollors, Mikey Rencz, Jussi Oksanen, Terje Haakonsen, Jeremy Jones, Zak Hale, Ethan Deiss, Seppe Smits, Werni Stock, Roope Tonteri, and more. The riders' styles are all different and it was important for Burton to feature a variety of unique, undiscovered locations to best showcase their varying disciplines. The team stepped it up this year with everyone logging solid footage of advanced and innovative tricks from the streets to the backcountry. We work with several film crews over the season, each submitting footage on a monthly basis, this was like our dailies. 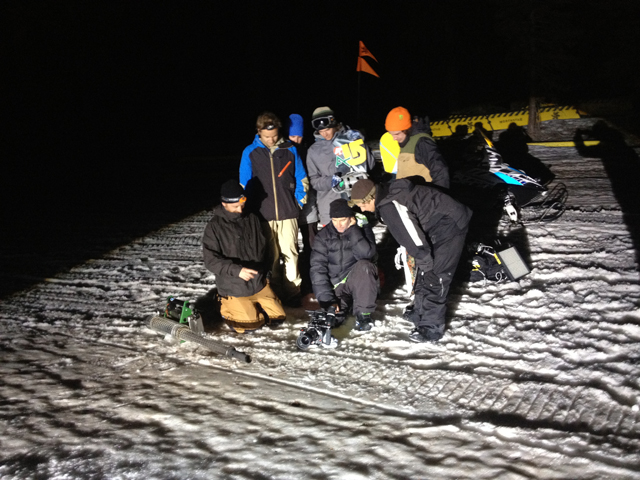 We would make comments, provide input, and log everything-the Media Browser in Adobe Premiere Pro was a huge help. Near the end of the season we hit the road with a small crew, tight grip and light package, and a smoke machine to shoot the creative action and lifestyle that comprised the opening movie intro and rider interstitials. From the end of the season through the summer our focus was on the edit. Just getting the footage organized was pretty amazing. We had a nine terabyte (TB) internal drive and 18 TBs of external drives filled with footage. Throughout the whole process, we worked closely with the team at Burton, including Bryan Knox, global director of team marketing and media, and Evan Rose, creative director. 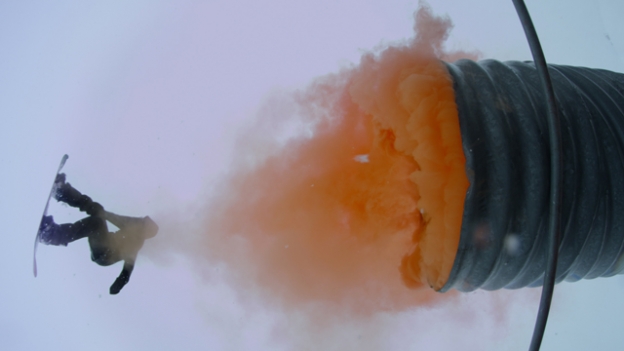 Adobe: You previously used Final Cut Pro. We understand this was really one of the first times you had ever used Adobe Premiere Pro. Why did you switch?
Tindale: This was our first film stepping into full 1080 resolution. We knew we would be working with different camera formats and needed an editing solution that could handle everything. Footage was shot on RED Scarlet and Epic cameras, mainly-but some Cineflex, Panasonic HPX, GPS, GoPro, and a variety of DSLR cameras. It was incredible to just throw it all onto the Adobe Premiere Pro timeline and get straight to work. I think the main thing was the ability to deal with all these different formats. With so much footage and a tight timeline it was amazing to jump right into the edit and skip the time-consuming process of transcoding all of our footage. 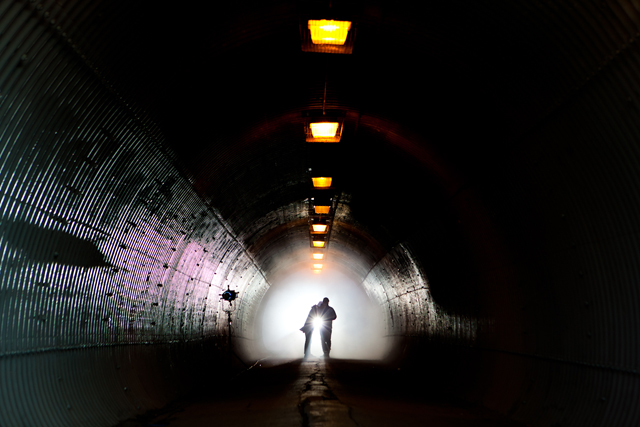 Adobe: What other Adobe Creative Cloud components do you use?
Tindale: We used Adobe Illustrator and Photoshop a lot for titling and graphics. Everything started as a still reference with style frames and storyboards. When we got into post production and visual effects we used a lot of After Effects. I would say 70% of the shots went through After Effects to create the VFX and smooth out speed adjustments, which made Dynamic Link a critical tool. 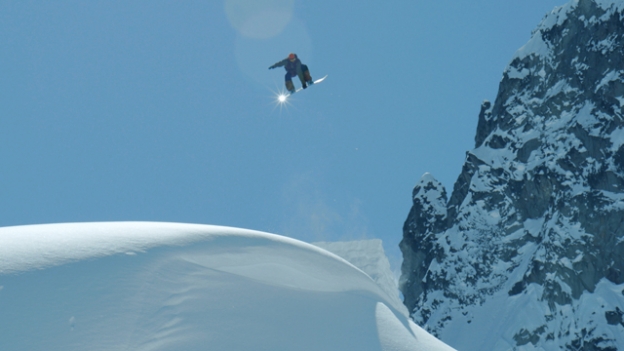 Adobe: What are some of your favorite features in Adobe Premiere Pro CS6?
Pettit: We are big fans of the quick and effective color correction tools in Adobe Premiere Pro. The speed adjustments and speed ramping tools are super quick and easy to use. And like David said, the ability to use Dynamic Link with After Effects is fantastic. It's so great to have updates in one program linked and automatically reflected in the other. I think it cut our time, literally, in half.

Adobe: How has the film been received?
Tindale: We just returned from The REELS Festival in France where 13 won Best Movie, Best Editing, and Best Cinematography so we're really pleased. 13 has been well received by the industry media and public. We are looking forward to the remainder of the festivals this year and the industry awards in early 2013. 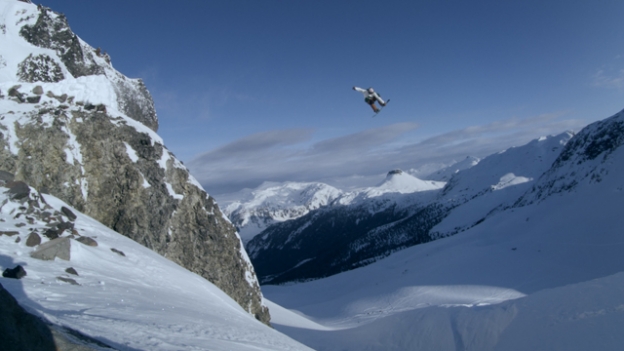 Adobe: What is your favorite part of the movie?
Pettit: The athletes themselves as individuals and athletes. It was great working with Burton-honestly, I can't imagine a better client. It's a team effort from the riders, team managers to the film crew – with everyone in sync we are proud to bring together 13 and feature the high level of riding and progressive tricks of the entire Burton team. We're honored to have worked on this project.

Comment from Bryan Knox of Burton
13 is one of the best films to come out of Burton to date. We wanted to make a film that gets you hyped for winter and makes you want to go snowboarding.

I would like to personally thank everyone that helped make 13 a successful film.