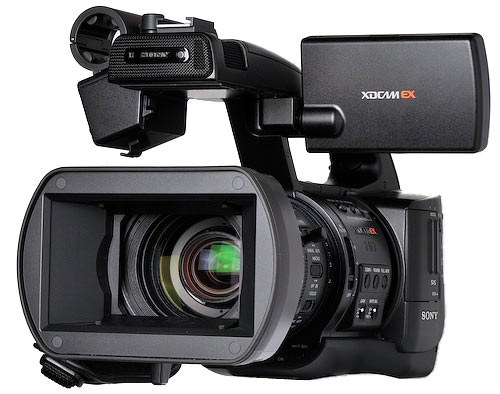 A few days ago I obtained a new, production-build PMW-EX1 camcorder, serial #103171. Its shipment had just arrived in the USA, so it’s a sample of what’s shipping now. While it’s 99% the same as the pre-production camera I reviewed, it has a couple of differences worth noting—having two samples gives a more rounded picture of the variations you’re likely to see in wild, free-range cameras. The analog is cleaner on the new camera, the Lens Info readout is somewhat more accurate, and the lens vignettes less.

The analog outputs on my review unit were noisier than on final production build cameras due to a pre-production output board. I’m happy to say that the shipping unit shows very clean analog outputs. Standard-def outputs (analog and digital alike) still show excess high-frequency information, mostly as egregious aliasing on fine patterns, but the composite is clean enough on S/N 103171 to be usable as a confidence monitor during shooting.

On the earlier camera, the Lens Info readout—a bar graph in the finder showing the focus point and depth of field—appeared to indicate consistently about 10% too close: when the lens was focused 4 feet out, the Lens Info bar showed 3.5 feet, and this too-near indication seemed to hold throughout the focusing range.

Of course you only get this degree of precision when the aperture is wide and the lens is zoomed in: the Lens Info display is a bar drawn along a focusing scale, indicating the range of focal distances that fall within the depth of field for the current settings. One problem with this display is that there is no indication of the actual focus point, only the whole “roughly-in-focus” area, so when you’re wide and the bar spans the entire distance scale (even wide open at f/1.9, 5.8mm focused at 7 feet shows everything between 3 feet and infinity in focus) you have no way of telling where your focus actually is. Filmmaker Lenny Levy points out that with the HVX200’s distance readout, he can prefocus by the numbers for a push-in and be reasonably confident he’ll hold focus through the zoom; with the EX1 he loses that ability (if you have the lens in full manual mode, you can always look at the lens barrel to see where you’re focused, but you have to tear yourself away from the EVF or LCD to do so).

I don’t know what metric Sony used to calculate depth of field; I find just from eyeballing the monitor that I’m a bit more critical than the indicator is; stuff that Lens Info says should still be adequately in focus is already going a bit soft to my eye.

Overall, I’d say that the EX1’s Lens Info is suitable as a very rough guide to focus and depth of field, but it’s not something to put a lot of faith in.

Of course the Big Issue with the EX1 has been the lens. The pre-production unit showed some slight corner-cropping in the middle of the zoom range as well as the expected (and normal) portholing at full telephoto.

The new camera still has the portholing at full tele—down 1/2 stop at the edges of the picture, with the clear central area subject to shifting from Steady Shot repositioning. It’s something so gradual that it’s only noticeable on a flat, featureless wall, and it diminishes (and shrinks edgeward) as the lens is stopped down, being only 1/4 stop at the outermost 5% by f/4; entirely gone by f/5.6, and invisible even with Steady Shot repositioning by f/8. This sort of thing is par for the course with wide-range video zooms (even those costing more than the entire EX1) and I simply can’t see it if there’s any texture or variation already present in the scene. It’s just not something to be concerned about.

I’m happy to find that the corner darkening I saw with the earlier camera between 8-15mm is much improved on this camera. Around 10-12mm with the aperture wide, there is a tiny darkening of perhaps the outermost 2% of each corner, just barely visible when shooting a featureless flat wall, but stopping down to f/2.8 or lower makes it vanish. I can’t see any evidence of off-center lens positioning at all, and the zoom tracks perfectly centered throughout its range. If this camera is typical of the current builds, it would indicate that Sony has a good handle on the problems seen in the first production run.

Everything else seems to be pretty much as it was on the previous unit. It’s a bastard handheld, and it drains the battery in two days even when shut off, and it makes the most detailed pictures I’ve seen for the price, with tweakability enough to encourage days of fruitful fiddling in the menus.

I should also mention that this EX1 was obtained from a local reseller, and not loaned by Sony. This means several things:

• This camera wasn’t cherry-picked for review; it was fresh off the boat (or airplane) and was randomly selected from all the other EX1s available for sale.

• This camera is sticking around, so I’ll have opportunities to do more serious explorations with it in the weeks to come. Stay tuned.

• The days when you had to go online or go mail-order for good prices are past; don’t assume that your local reseller will charge you more than a box house. These days, everyone knows about the Internet, even your local dealer. Thus your local dealer is probably charging the same amount as the box houses. They also provide service and support without the hassles of shipping things back and forth, and they sometimes have demo units in their showroom you can try before buying.

I went to VMI in Sunnyvale, CA: they just happened to be closest to me, and they had a shipment of EX1s come in that morning, so I knew mine would be plump and fresh and at the peak of flavor. And they were charging the same amount as everyone else.

I still shop with Amazon and B&H and Promax, but I also happily give money to VMI and Snader in San Rafael (who put on a great trade show in January) for pro video gear, and Keeble & Shuchat in Palo Alto for photo equipment, lighting and grip gear, and expendables. Sound like a pitch? Well, it is: I don’t get any kickbacks from any of these vendors, but they’ve all given me great service, and I want to see ’em stick around. So if you’re around here, give ’em some business. And if you’re not, find out who your local dealers are, and throw some money their way. If your community bricks-and-mortar retailers are any good at all, they deserve some support—and nowadays that support doesn’t need to cost you anything extra.