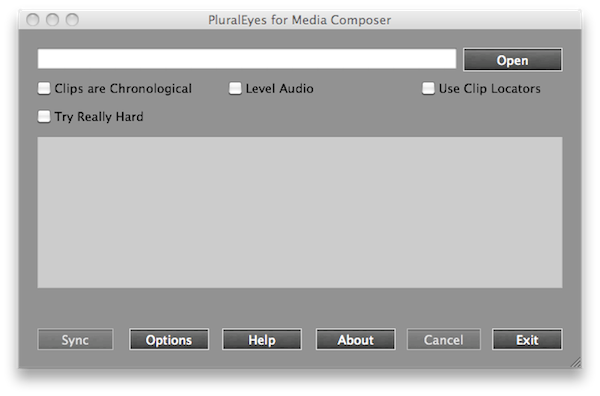 Singular Software made the announcement just the other day that their flagship product PluralEyes has been released for Avid Media Composer. As we all know PluralEyes is automagic software that “listens” to the audio of clips in an edit timeline and then attempts to automatically sync them. I say attempts but I’ve had great luck with it syncing some very difficult things and the Avid version seems to work quite well. PluralEyes for Media Composer is on sale for $119 until February 21.

Actual operation within PluralEyes is almost the same as the FCP version. The first thing you’ll notice if you’ve been a user before is the Media Composer version has a larger, darker interface than the FCP version. Options are available in the main window without clicking a button to open a second pop-up window. 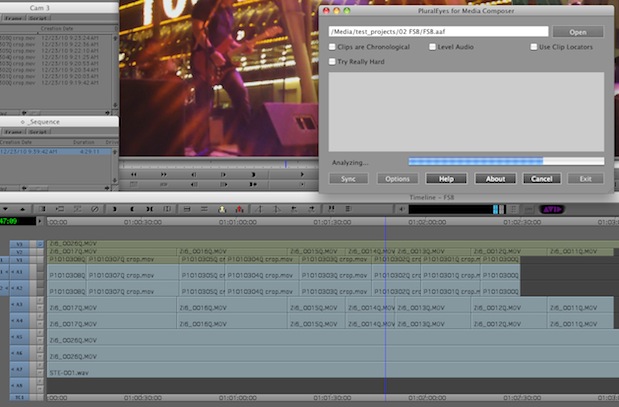 PluralEyes for Media Composer in the process is syncing a multicam shoot.

The usual options are there including Clips are Chronological (to alert PluralEyes when clips are placed in the order they were shot), Level Audio (helpful if you’ve got source clips of different audio levels), Use Clip Locators (for giving PluralEyes some extra help by placing sync locators in your clips be exporting) and “Try Really Hard” (which tells PluralEyes to … you know, try really hard). More exact details on all of these options are available on the manual page. 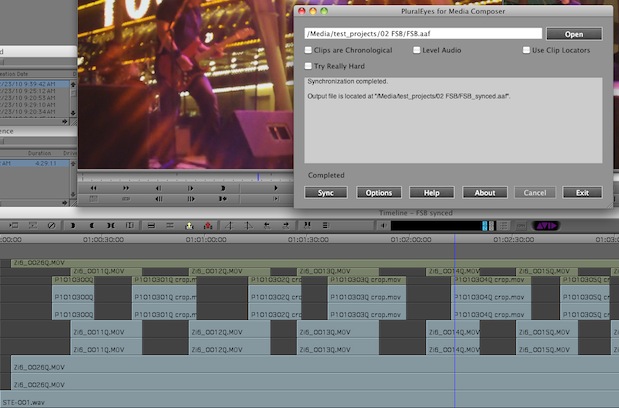 The synced Media Composer sequence after the PluralEyes operation and importing of the new synced AAF file.

What will be missing if you’ve used the FCP version of PluralEyes are options for Single Output Sequence and Replace Audio. I don’t think a single output sequence is relevant with Avid’s AAF protocol as PluralEyes is going to spit out a single AAF which will be a single edit timeline. Replace Audio, which creates new master clips with source video and audio from the double system sound source, would be nice too and that’s being looked at for a future release. This is a version 1.0 release of PluralEyes for Media Composer so hopefully we’ll see more bells and whistles as it gets updated. One great whistle would be for it to create an Avid group clip from your sources like the FCP version does.

It’s also worth noting a couple of “known issues” with the Media Composer version. First is that it won’t work with media that resides on a Unity system. That will be a deal breaker for some.

Second, it only works with native .mxf media. That means if you have all of your clips imported via Avid Media Access (AMA) then you can’t use PluralEyes as you can’t export an AAF from AMA linked media. This is no fault of PluralEyes and is currently an Avid limitation with AMA, which I hope they are going to resolve as AMA matures.

The other hitch I encountered was also not the fault of PluralEyes but rather Media Composer’s 24 video/audio track limit. I was cutting a music video and we had 42 takes of the song. The workaround there was to Pluralize two seperate sequences and then use Auxiliary Timecode to group the clips. This won’t be a limitation for most regular multicam shoots as you probably won’t have more than 24 cameras rolling.

Normally a 24 video track limitation probably wouldn’t be an issue but with music video syncing it could be.

One little thing is that the Media Composer version has the exact same icon as the FCP version so it would be nice if Singular Software would differentiate the Media Composer version’s icon a bit so you’ll know which version is which without having to read the actual name. Seems silly maybe but if you have both applications in the dock (or have them both running at the same time for some reason) there’s no way to see the name without moving the mouse down to the icon itself.

It’s really great to see Singular Software supporting all of the major non-linear editors. And I mean all as at this point there’s Media Composer, Final Cut Pro, Adobe Premiere Pro and Sony Vegas! There’s also DualEyes which will attempt to sync dual-system sound outside of the NLE. That really covers all the bases. I was asking Bruce Sharpe of Singular Software from the first time I used the FCP version of PluralEyes when they planned on supporting Media Composer so he may have created this version just to halt my nagging. I thank him for that and I think many other Media Composer users will too.

PluralEyes for Avid Media Composer is currently priced at $119 until February 21 (that’s $30 of the regular price).  There’s both a Mac OS version and a Windows version of PluralEyes for Media Composer.  I consider PluralEyes an essential tool in the editor’s toolkit, not because I think editors should be lazy (if you’re new to editing then do yourself a favor and learn to sync WITHOUT PluralEyes so you can do it efficiently when the need arises) but because it helps automate a time-consuming process and gets you to the creative much faster. That’s almost priceless.