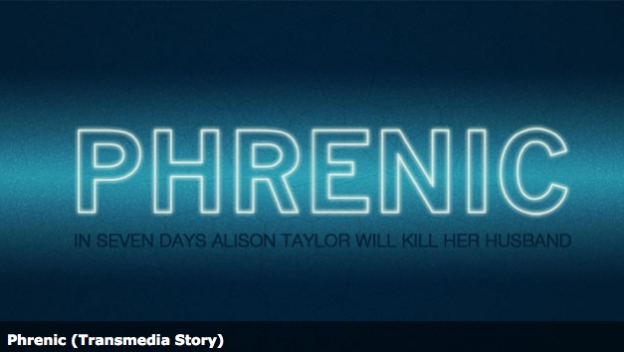 In this interview I chat with filmmaker, Mike Vogel, about his latest project, Phrenic, an interactive web series.

Phrenic is a science-fiction mystery about housewife, Alison Taylor, who is planning to kill her husband, Frank, in seven days. Alison believes her husband, a research scientist at a nanogenetics company, called Life Identical, is physically, no longer the person she married, and she fears his work on a top-secret project has something to do with it. Plagued by voices emanating from inanimate objects, including an old porcelain doll, Alison has sought help through medication and a psychiatrist, Dr. Katherine Trunk. As the series develops, the viewer begins to question whether Alison is actually the one going crazy.

Phrenic was recently released as a mobile app on iOS. The app, in addition to seven webisodes, includes  a game, a body scanner, messages from Alison’s talking doll and a choose your own adventure ebook. Additional content provides supplemental narratives to the  series. An in-app purchase component is also included for future webisodes. Ancillary components outside of the application include a website for the nanogenetics company, Life Identical, an eBook on Kindle and video blog called Stop Life Identical.

Citing the television series, Lost, as an inspiration, Vogel, a filmmaker, explained his interest in using multiple platforms to expand the storyworld of the web series “the thing I like… it’s not a continuation of the same characters and plot, instead we get to see a different part of the world.” As Phrenic continues to evolve, Mike is focusing his energy on further development of new characters and plot-lines. He hopes to use audience engagement and feedback from Phase 1 to help drive the Phase 2 narrative. And while he doesn’t want, or expect the audience to tell the story he believes that by giving them some of what they want will continue to keep viewers engaged, “Let’s please the audience… make sure the interested people are getting what that want… there is, after all, room for us to explore.”

During our discussion, Mike said he originally submitted it to the App Store in October and it was rejected for being “primarily a movie.” The rejection prompted Mike’s exploration into additional components of the app, “I don’t think I was being [initially] creative enough on the app side.” His new approach expanded upon the narrative of the story, “A developer friend and I worked hard to create a bunch of interactive elements tied to the story…My hope is that I’ll be able to push out videos as in-app purchases, in addition to free content updates like stories or games.”

As I was going through the websites and videos during my research of Phrenic I noticed that a social media campaign for the project is currently non-existent. When I asked Mike why, he explained to me that a Facebook page for Phrenic has so far been reserved, but social media marketing will not be developed until later. He expressed his frustration at drawn-out marketing campaigns; “I get really fatigued to hear about everyone’s project that hasn’t launched yet…I’m trying not to fatigue people.” When I asked him if he expected to use paid advertising or a large social media roll-out after Phrenic’s release, he replied “I’m a big believer of doing advertising on social networks, targeted advertising is key… if you don’t believe in paid advertising, you don’t believe in your product.”

With an eye towards future webisodes and new content, I asked Mike how he hoped to finance additional costs of production. He explained that the idea is to allow the project to grow over time, but the biggest challenge is still to figure out a revenue stream. “That’s always the big struggle” he sighed “It’s hard to get people to pay for entertainment…on the one hand  [there is] the chose your own adventure e-book on Kindle.” On the other hand? “ We can use the in app purchase component for new pieces of content… ultimately I am hoping the app will drive revenue”

Lastly, I wanted to know what he learned while developing his first transmedia project, “Some people don’t want to deep dive” Mike explained and “the hardest challenge is in getting people interested in the project… there is no clear path like there is for a feature, which people know how to get their hands around. How do you explain to people at the grocery store what it is? I think people ultimately want to figure stuff out, but they have to know how to get started.” On advising new transmedia producers he says that it “is a good challenge for someone interested in telling stories.” When I asked him what he found most exciting about creating a transmedia project, as someone coming from traditional filmmaking, he said “some of this feels like being a kid and I’m making it up as I go along.” As for the future of Phrenic? “I still feel like I’m in the conception phase, I think to myself, where else could this go?”