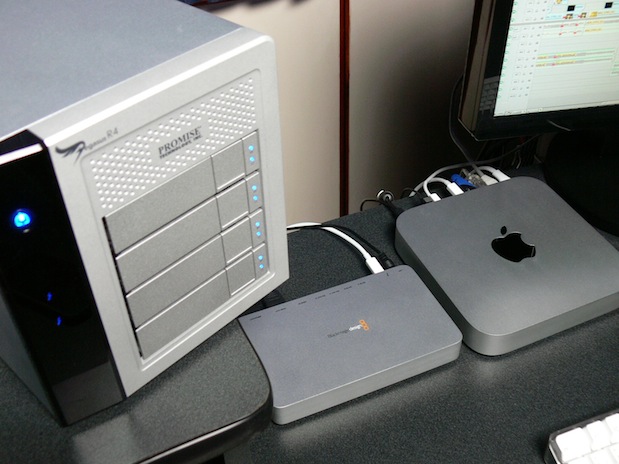 As many ProVideo Coalition readers may recall, I have written about disk arrays from PROMISE before, although the last time it was primarily to be used with a computer with an eSATA port. Now that all Mac computers (except for the MacPro tower) use a Thunderbolt port, many are looking for a disk array which will have the appropriate connection and that will be at least as fast as what they got previously with eSATA. In this article, you’ll find my results with the Pegasus from PROMISE, used both with a Mac Mini and a MacBook Air. You’ll also find PROMISE’s official position on journaling or non-journaling with this device, since this was not previously documented anywhere to my knowledge.

At publication time of this article, the Pegasus RAID5 configurations are as follows, including current prices. The number after the letter “R” refers to how many drives are inside.

All pricing exclude the price of a Thunderbolt cable, which are currently US$49. All of the Pegasus RAIDs include loopability, so you can add a monitor or Thunderbolt i/o device at the end. You can also daisy-chain up to six Pegasus RAIDs via Thunderbolt. Pegasus units are shipped standard as RAID5 (although can be re-configured to other RAID configurations, including 0, 1, 6, or 10) with HFS+ formatting and journaling active, which surprised me and was the only question I had to ask PROMISE to complete this article.

The increased importance of RAID5 in the tapeless video acquisition era

As you know, when you shoot tapeless, there is no “original tape” which serves as your inexpensive and permanent archive. Producers and editors really should backup the original material before editing, but with their hectic schedule and rush to get to editing, many don’t do that before re-using the chip or disk used in the original recording. With RAID5, there is redundancy. If one of the four drives in the array fails, an alarm alerts the editor about which drive is bad, and s/he replaces it with a spare. After some time goes by, the RAID5 system writes the missing data on the new drive, so only time is lost, not data. If we weren’t dealing with multilayer HD video, we might be able to get away with RAID1, but for multilayer HD, RAID1 isn’t good enough: We need the high performance together with the redundancy, even though we sacrifice some space: The 4TB becomes about 2.7TB when formatted as RAID5 in HFS+.

To journal or not to journal: That is the question for video editors

The traditional wisdom for video editors was to de-activate journaling on media drives, since despite journaling’s great benefits, they were overridden by the resources that journaling demands. In other words, the drive or RAID was so busy doing its own maintenance that it couldn’t keep up with playing video without jumping. So for a long time, video editors have de-activated journaling.

One of the very first things I did when I started to test the Pegasus was to check its journaling status out of the box. When I saw that it was active, I contacted Billy Harrison, the Pegasus product manager at PROMISE. Here was his response:

Data integrity is the most important aspect of every product we design, manufacture and sell. Disabling Journaling on drives was recommended (in the past) because volumes on single drives and even lower-end software RAID based products take a performance hit with Journaling enabled. We design our products to ensure volume Journaling (in any OS) does not impact performance allowing the user to exploit our product to its maximum potential.

What’s the difference between a 4-drive and a 6-drive?

The measurements I made in Guatemala were with a 4-drive Pegasus. PROMISE rates the difference as follows: over 500MB/s sustained with a 4-drive unit, or over 800MB/s with a 6-drive.

Pegasus/Mac Mini performance according to Blackmagic Disk Speed Test, as I tested in Guatemala 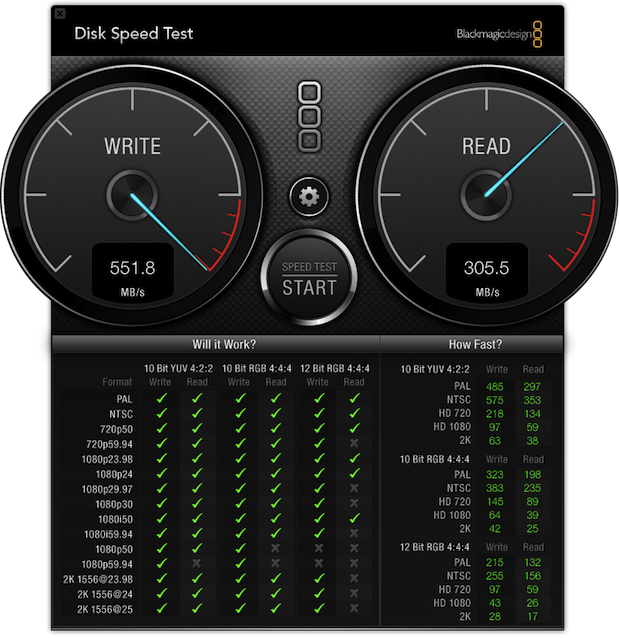 Speed test I performed when I visited Staff HDTV in Guatemala. Click here for a larger view of this report.

This disk performance beats by far the performance that Staff HDTV/Alta Definición previously got with their MacPro tower using an external eSATA-based system, despite the fact that the older one was also a 4-drive array using RAID0 (generally higher performance, although without any redundancy), and the Pegasus is configured for RAID5 (which has redundancy). The increase in performance is likely to be due to a combination of factors, including the faster magnetic drives available today, the Thunderbolt connection, and the hardware-based RAID controller in the Pegasus, as opposed to the software-based RAID they used before.

What about performance with a MacBook Air?

While I was in Guatemala, I had my MacBook Air i5 1.6GHz 4GB with me, so I decided to test that too: 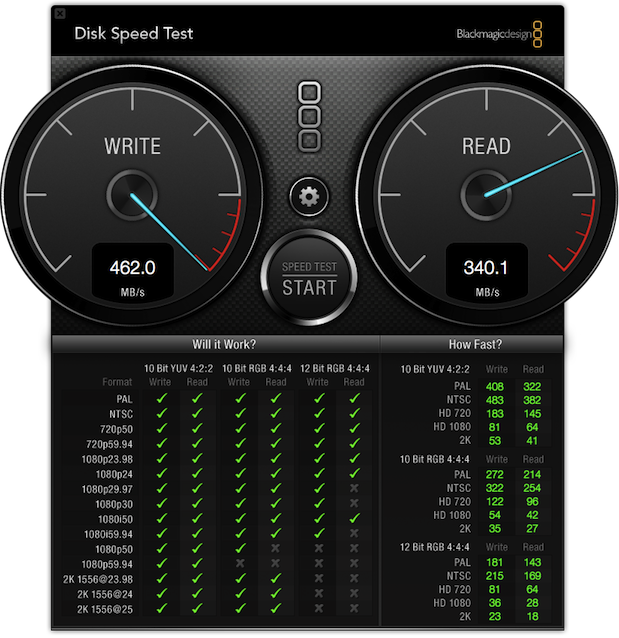 Many readers may at first see the Pegasus as a very expensive product compared with other RAID5 they’ve purchased before. However, when they compare an entire system price with a Mac Mini, a Pegasus, and possibly one of the Thunderbolt audio/video i/o devices I have covered, you will see that the system price is much lower than what it would have been previously, since what you save on the computer compensates it so much. You end up saving much more, and gaining much more performance, as Staff HDTV discovered.

I deal with a large number of consulting clients who need a disk array but are not yet ready to purchase a new computer simultaneously. That’s why it would be great if PROMISE would offer a version of the Pegasus with an eSATA connection too, or an adapter that would go between Thunderbolt and eSATA. That way, those clients would be able to purchase a Pegasus today and therefore be ready for the Thunderbolt Mac (or Windows computer) later.

Review of my other Thunderbolt articles so far

Crossing the 180 with Mishna Wolff, Writer of “Werewolves Within”