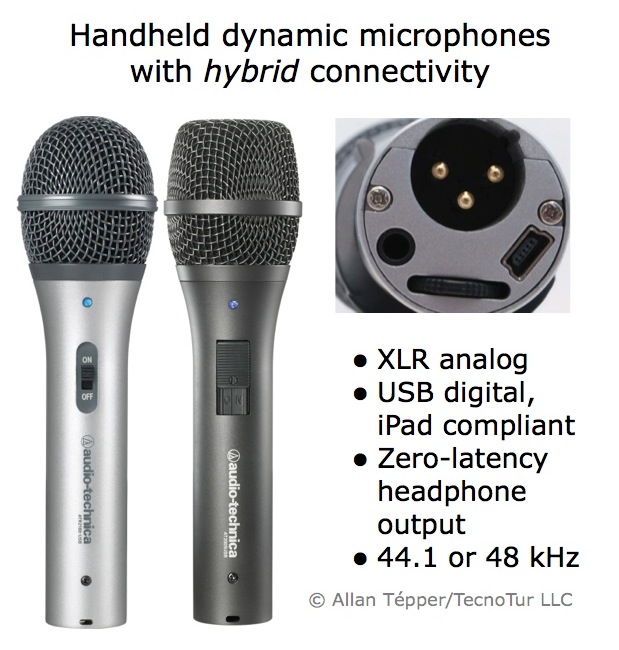 In part 1 (1st handheld dynamic microphones with hybrid XLR/USB/iPad connectivity from Audio Technica) I covered background information, including the benefits & limitations of previous USB mics, and the need for hybrid models. I also defined “zero latency monitoring” and made some initial comparative performance tests via the analog XLR output against our reference mic (Heil PR–40) and the classic Shure SM58, and was quite impressed. Now in part 2, we go further and test the digital USB output, and even include some tests from two professional voice talent who are already using one with excellent results. As promised, we’ll cover how to switch them via software between 44.1 and 48 kHz when using the digital USB output.

What you may have missed in part 1 of this article

If you missed part 1, you really owe it to yourself to absorb it first here. Part 2 will still be here waiting for you when you return 🙂

Comparisons between the black model and the silver model

When I wrote part 1, the black version wasn’t yet available. I had already published the weight and dimensions of each, but I hadn’t yet seen the packaging or tested the black one. Now I have, and I prefer the black AT2005USB version (which Audio Technica public relations calls “the professional version”) for the following reasons:

For some reason, the black version comes with an XLR cable which ends in a silver colored XLR connector at each end, which is esthetically inappropriate with a black mic. I understand that the silver colored mic would come with that XLR cable, but not the black one. And I have already seen at least two units that have arrived that way (my sample unit plus another one I purchased). The further irony is that for many years, I have purchased black Audio Technica-branded mic cables since they are the only ones I can be sure are 100% black, since I have always preferred them for esthetic reasons with other black microphones that were not from Audio Technica, including the Electro-Voice RE50N/D-B (for omni applications) and the Shure SM58 (for cardioid applications). Other brands have shown black XLR connectors in the picture, but then shipped one with silver-colored connectors. The point here is that Audio Technica obviously has excellent, completely black XLR cables. I don’t know why they don’t include that type of a cable with their black microphones. My suggestion for you is to buy the 100% black cable from Audio Technica, and use the one that comes with the black mic as an extension at the camera or audio recorder end, not at the microphone end, so it won’t be visible on camera or to your interviewee.

The AT2005USB black model has a typical discounted price of US$79 in the USA. However that doesn’t stop some places in other countries from gouging up to US$449.99, which is well beyond what the import tariff would be.

If you are recording audio for video, you absolutely want to record at 48 kHz, since that is the standard for audio-for-video. Also, if you are a voice talent and the client asks for 48 kHz for any other reason, you must record at 48 kHz. Unfortunately, that means that you must forget about recording with GarageBand, since GarageBand cannot record or export 48 kHz. You must record with an audio app that supports 48 kHz. But no matter what 48 kHz-capable app you use to record audio, you must first “ask” the A-to-D (analog-to-digital-converter) in the mic to output 48 kHz instead of 44.1 kHz. The request to the A-to-D microphone is done with a program that’s already on your Mac, although perhaps you didn’t know it. The program comes installed on all recent Macs and is called (on Macs configured in English) Audio MIDI Setup. To find it on your Mac, first you have to be in the Finder. From the Finder, you must go to the Go menu, and then to Utilities. There you’ll find Audio MIDI Setup and double click it. If you already have the microphone connected to your Mac via USB, it will appear in the Audio MIDI Setup as you’ll see here: 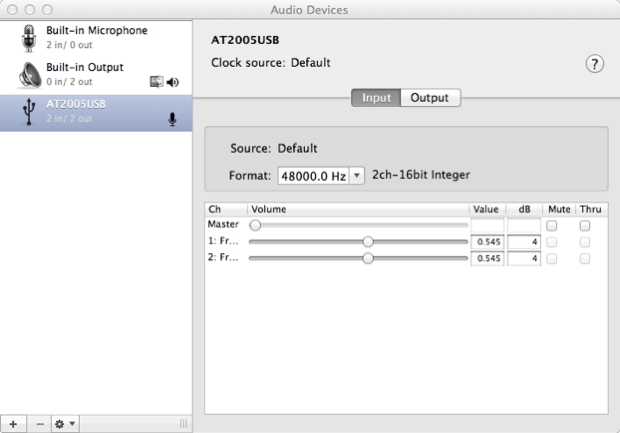 Select the microphone in the left column with its name AT2005USB (or other USB microphone whose A-to-D supports 48 kHz) and then on the right side (after selecting the Input tab) select 48000.0 Hz, which is just another way of saying 48 kHz.

If the recording app that you use to record audio has a setting for sampling rate, you must set that too. As you’ll see in my new ebook about this workflow, some of the audio recording apps (even free ones) have a sampling rate setting which must be set to match the incoming stream, while others simply take the stream as it comes without having to set it.

First of all, to connect one of these Audio Technica hybrid mics to an iPad, you need Apple’s Camera Connection Kit. I tried with a knockoff and it didn’t work, but it worked fine with Apple’s original Kit. Your mileage may vary (and unfortunately I don’t know how to say that expression in metric). Also, not all USB mics work with the iPad, but fortunately both of the covered hybrid mics from Audio Technica do.

Unlike with Mac OS, on an iPad there is no system-wide adjustment to request a specific audio sampling rate from a digital device. On the iPad, you simply set it in the recording app, although right now there are few such apps that record 48 kHz. In fact, at publication time of this article, all of the video recording apps I have tried on iPad record audio at non-standard 44.1 kHz, which is unacceptable. Among those iPad video apps that record audio inappropriately at 44.1 kHz are Apple’s iMovie, Avid Studio for iPad, and FiLMIC PRO. Despite that fact, with the help of Rub©n Abruña’s iPad (2012), and his eagle eye for detecting lip sync errors, we were able to determine that they all recorded with proper lip sync from the AT2005USB connected digitally via Apple’s Camera Connection Kit using all of those apps. Since all three apps recorded with proper lip sync from a USB audio source (and none of the three developers were too concerned with audio precision for video or else they would have made the apps for 48 kHz), my conclusion is that iOS was designed to compensate for the natural delay of USB audio and thus delivers a combined stream to the app which has already been processed. I still hope all of those video apps will switch to 48 kHz only (not switchable) since that is the established standard for audio for video, whether you are later going to Blu-ray, DVD, or any of the HD tape formats. Apple, Avid, and FiLMIC PRO: It really “Hertz” me that you are recording video with the incorrect audio sampling rate! Please fix it! 48 kHz needs to be the only way to record audio-for-video, not a menu option to allow the user to fall into a trap. 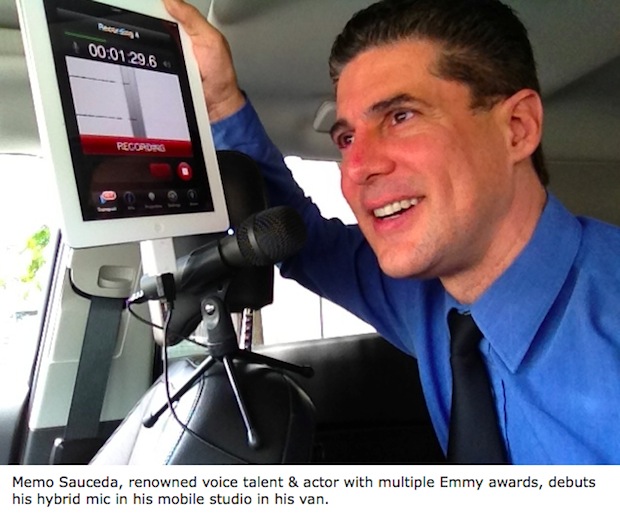 As far as audio-only recording on the iPad, we had excellent success from the AT2005USB mic at 48 kHz with the FiRE 2 – Field recorder app, which I cover in a related article, which is linked at the end of this one.

There is a myth that states that dynamic microphones don’t have professional quality or broadcast quality. The reality is that most microphones used in radio booths are dynamic… and most handheld microphones used in broadcast TV news are also dynamic. The technology of dynamic microphones has drastically improved. Naturally, dynamic microphones have a lower output level than condenser mics. That’s why sometimes when people have a mediocre preamplifier without realizing it (since they’ve always used it with a condenser microphone, which has a higher output level), they become unsatisfied with the quality of a dynamic mic they connect, and incorrectly blame the dynamic mic, when the true villain is the mediocre preamp that has seemed good since it has always received a relatively high level and therefore has practically spent its life sleeping. Fortunately, the preamplifier that’s built into the two hybrid dynamic mics tested is very good and very well matched to the signal they receive.

Samples from the AT2005USB recorded via its digital USB output

Following are some samples from the AT2005USB. All of these were done using the digital USB output of the mic, so they are a testament to both the microphone’s quality, the internal preamp, and the internal A-to-D. In that respect, they are different from the recordings in part 1 of this review, which used the analog XLR output and then used the preamp and A>D built into the Roland OCTA-CAPTURE at 48 kHz/24-bit. All of these are recorded at 48 kHz/16-bit, and are all raw (i.e. no equalization, compression, etc. Only normalization.) Depending upon your browser, you can right-click and Download linked file as… or Save link as…

Conclusions and a wish list for Audio Technica (or other manufacturers)

I have already explained how valuable it is to have a hybrid dynamic mic which have multiple connectivity (XLR analog/USB/iPad/zero latency monitoring) in a single device. Regarding performance: two award-winning voice over talent I know, their clients, and I have all been blown away. I only have applause about the connectivity or sonic performance for both male and female voices. I would recommend these microphones for all of the applications indicated above.

My wish list for Audio Technica (or other manufacturers) for a future, more expensive dynamic product or version would include :

I have just published a related ebook in two languages.
The format is Kindle, but even if you don’t have a Kindle device, you can read Kindle books on many other devices using a free Kindle app. That includes iPad, iPhone, Android phones, Android tablets, Mac computers, Windows computers, some Blackberry phones and Windows 7 phones.

If you’re going to buy a Kindle book to give as a gift, you must do so via the Pan-American Amazon store, regardless of where you or your recipient resides.