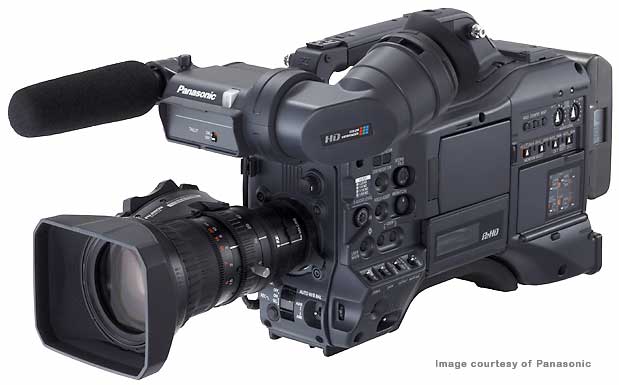 Panasonic announced the AG-HPX300, a 1/3″, 3-MOS shoulder-mount P2 camcorder with a 17x Fujinon interchangeable lens (the Euro version will be the AG-HPX301E). In many ways, it’s a companion to the HVX200A and HPX500: six scene files, 1080i/p recording, 720p variable frame rate recording, SD recording in both DV and DVCPRO50 formats, 24p capability, and two P2 card slots, but there are three things that put the 300 in a class of its own:

Let me repeat: full-res sensors and AVC-I recording for under $11K.

This is big. It’s Panasonic’s first affordable HD camcorder with full-res sensors (it has superb full-res 3-CCD cameras, but they cost 4x what the 300 will), and it offers the award-winning AVC-I codec in addition to the familiar DVCPROHD option, providing a much more robust, post-friendly image for chroma-keying and extreme color correction.

NBC Universal is buying a “large number” of HPX300s, even though they won’t be shipping until March.

I’m eagerly looking forward to reviewing the HPX300. In the meantime, Andy Shipsides at Abel Cine Tech has already managed to post not one, but two video first looks at the camcorder [wouldn’t one of them be a first look, and other a second look? -ed]. If I were Stephen Colbert, this is where we’d put up a one-box of Andy, and I’d shake my fist at it, screaming, “Shipsides! Shipsides!”

But I’m not Colbert, so just watch the things, already. If this camcorder delivers what it promises, it could be the “it” camcorder of 2009. Stay tuned…