Before I received the NVIDIA K5000, I read about it and was excited that it had H.264 encoding capability on the board. I tend to do a lot of H.264-encoded deliverables. Unfortunately my excitement was short lived when I found out that while NVIDIA had delivered on their end, nobody else had stepped up to the plate to deliver on the software side. This is a shame, really, because NVIDIA is claiming an impressive 8x real time encoding for 1080p video. Granted, it’s possible for someone like Sorenson Squeeze to hook in to this power, they just haven’t done it yet. The power is also there for any one else, including you, to utilize it. So, in a way, the thought here was: build it and they will come. So the hardware is ready. 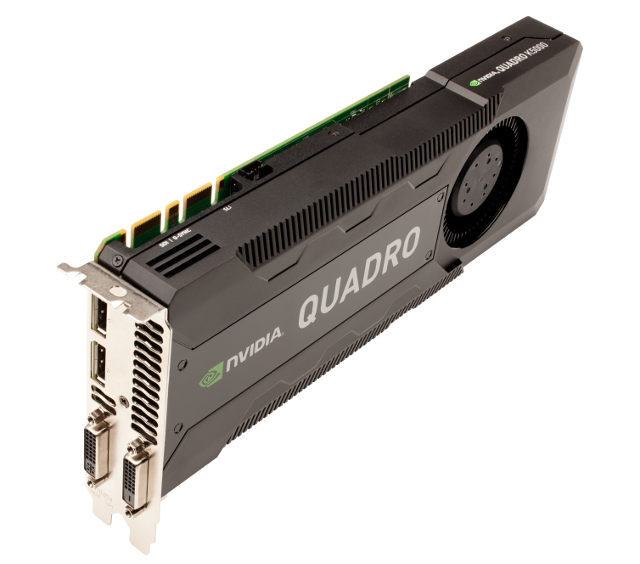 To be fair, the H.264 encoding on the chip is actually so fast that it exceeds the speed that video can be sent out of the back of the board. All this processing power is really designed more for the broadcast space for companies to do massive streaming of video signals.

It could also be used with a MacPro and RAID running Premiere Pro with the whole unit running on a grid server or over an extra-net with a light client – like a MacAir actually running the PremierePro interface – getting streamed video from the video card. Would anyone want to do this? I don’t know. To be honest this was a suggestion from Adobe.

Of course, the real usefulness of the card doesn’t require quite that amount of complexity. Adobe – including PremierePro – is fully ready to exploit the full power of the CUDA processing on the card using the Mercury Playback engine. This is definitely where this card excels. NVIDIA is promoting this as the first GPU designed for “the cloud.”

The K5000 GPU adds value here because the entire video pipeline was re-written to use CUDA. Even with the processing power on today’s CPUs, the CPU itself just couldn’t handle the math involved in the real-time processing of scaling,  color correction and blur, etc.

Beyond the realtime power that the K5000 delivers, it does help with rendering even though final renders are done on the CPU, because the GPU can hand the frames to the encoder faster, so there IS a drastic reduction in encode times because the bottlenecks to the CPU are removed.

And as far as a practical difference, previous NVIDIA cards were designed to power two monitors, but the K5000 can actually drive four displays (2 DVI + 2 DisplayPort), which could come in handy if you’re trying to one-up your co-worker in the next edit suite who’s struggling to deal with the the screen real estate of a measly two 30” monitors. And if you really wanted to show off, you could use their Quadro Mosaic technology to run 16 screens from a single workstation. It’s also capable of resolutions to 3840×2160 at 60Hz or 4096×[email protected] at 48Hz.

Fermi required a lot of power. Kepler is much more elegant and has more GPU cores, like a multi-core CPU. So the number of CUDA cores was doubled (from Fermi’s already impressive CUDA 512 cores) but the power requirements were reduced. So it’s more power efficient and runs cooler. That “cool running” is a good thing, as any electrical engineer will tell you, because it improves the lifespan of anything inside your computer, including hard drives. But unless you REALLY love “being green” you’re probably not going to jump on Kepler from Fermi.

However, if you’re running an old NVIDIA FX 4800 you’re probably much more in the target group to move up to the K5000. 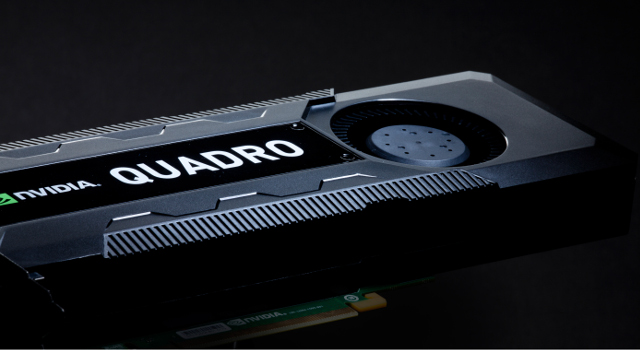 Another interesting factor when used with Adobe After Effects CS6,  is the raytrace engine. So, in the past, AE has kind of done fake 3D, but to do actual objects in 3D, the optics rendering engine ran on CPU, but it’s extremely slow because raytracing is so intensive. But GPU speeds are 30 to 100 times faster than the CPU. So a card like the K5000 really ramps up the speed immensely.

And, though I’m not really a 3D guy, I will assume that possibly some of those reading this are. And for them, the K5000’s processing and large frame buffer capacity can assist with dealing with greater levels of model complexity and more complex texturing. This was actually an issue recently for one of my vendors. Not having any 3D chops myself, I farm out my 3D work to a trusted collaborator. But on a recent project we were dealing with a massively complex 3D diesel engine. Completely built from the functional CAD drawings from the real engine itself. The power needed to get even the most basic animation was pushing my 3D artist’s computer to its limits, and on a tight deadline, we were lucky to get it done. The K5000 certainly could have helped him. Sadly, I was too selfish to give it up.

In addition to 3D, colorists can also benefit. DaVinci Resolve also gets a boost. Purpose-built Resolve systems tend to use an external chassis to fit all of the necessary cards, and the K5000 only needs a single six pin power connector. So it makes it easier because of the lower power draw. Plus, Adobe isn’t the only one to use CUDA. DaVinci Resolve uses it too, to deliver real time processing, that means that the more powerful K5000 will deliver better performance.

Resolve can also use the OpenCL technology available on NVIDIA and AMD GPUs but will default to CUDA if possible for better performance. Single GPU configurations (we call them 'Shared') use the same GPU for image processing as well as for the GUI and if you plan on using this configuration you should select the fastest GPU you can. Please refer to the latest Mac or Windows configuration guide for details.

And while I’m on the subject of Avid, it’s another place where the K5000 has some benefits, because Avid’s 3D toolset with support for  NVIDIA’s 3D VisionPro . And, it’s not just 3D in Avid that can benefit.  Avid software, which recognizes the K5000, analyzes the system hardware and intelligently distributes the processing power between the GPU and CPU. It allows more streams of video and effects than using the processor alone. Even on a Quadro 4000, this amounted to performance increases with Avid of between 1.4x and more than 7x over the CPU alone, and Kepler doubles those gains.

But still, Premiere Pro with the Mercury Playback engine is really the showcase editing app where the K5000 excels. Adobe and NVIDIA have demonstrated  running 11 streams of 1080p/30 video smoothly running in realtime.

So if I had to make a recommendation, I’d say that if you’re already running a Quadro 4000-level NVIDIA card, you’d really want to save energy and heat to move up to the Kepler architecture K5000. Performance gains would definitely be there, but I don’t know if the dollars per “horsepower” are really there with that jump. However, if you’re running an older or cheaper graphics card and are starting to utilize the Adobe CS6 stuff or are running Maya, maybe, then you could see some real performance gains that would definitely be worth the money.

Disclaimer: If the FCC has nothing better to do than worry about a simple post from a pasty-fleshed editor, and are actively monitoring my scribblings with the fervor devoted to monitoring the AP for IRS-related emails, then I will tell you that NVIDIA did loan me a K5000 for this review. Would that sway me to write good things? Hopefully, you know me better than that.