HD DVD vs. Blu-Ray was yesterday’s news. Today the bigger battle may actually be Adobe’s Air vs. Microsoft’s Silverlight 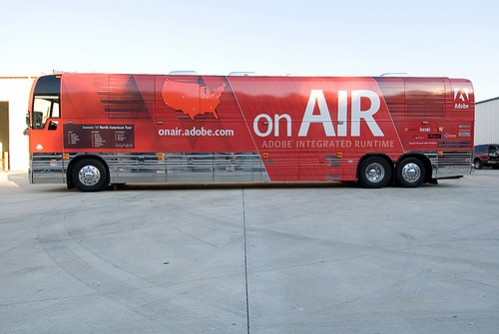 Let’s face it, we all saw the Blu-Ray battle won some time ago. Perhaps a far more interesting battle is heating up between rivals Microsoft and Adobe on delivering content via a graphical open run-time platform or via a web browser.

Adobe has tremendous distribution in Flash technology as it’s nearly everywhere. Microsoft’s Silverlight leverages the graphical ability of their browser. Adobe’s Air, is a distributable runtime platform that’s no longer in beta as of this morning. You can download it here for Windows and Mac.

While perusing the net this evening I ran across something interesting on Tim Sneath’s blog. Never been there before but was searching for Silverlight and MTV. Actually trying to track down a rumor that Microsoft is offering Silverlight around and folks – prominent folks like MTV, are passing in favor of Flash. So as I read his blog post about Silverlight and MTV I then clicked over to his example, which is Jackass 2.5 the movie supposedly being hosted by Limelight Networks and Microsoft. Well, interestingly enough, it’s Flash. Hmmmm. Looks like I have more digging to do.

We’ll be watching this very closely as you can imagine not only here, but also in our soon to launch WebDevCoalition. For more info, check out BetaNews.com

As a disclaimer – Adobe is paid advertiser of this site, and Microsoft isn’t…yet. (maybe never now)