We unearth a time capsule and see how predictions for digital television have panned out so far. 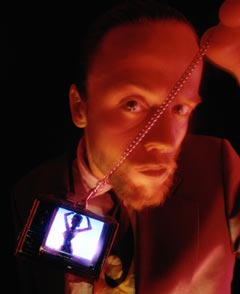 Back in the early 90s, I wrote a column on interactive media for Audio/Video Interiors magazine. It was an odd fit; I was writing highly technical, philosophical think pieces, while the magazine was aimed at the most blatant forms of consumerism and instant gratification – but the editor gave me free rein, and it was a fun romp.

I’ve had reason to go clean out my archives recently, and it’s been quite a laugh to read the predictions of what the “future” of television and video would supposedly look like. To give you an idea of the landscape at the time, DVDs were just being developed, HD was but a promise, and the main way of gathering information was to attend lots of conferences and trade shows – for example, it was considered odd that I also had started to use chat rooms on sites such as The Well as part of my research.

One set of predictions I wrote about were made by noted futurist Nicolas Negroponte (co-founder of the MIT Media Lab, founder of the One Laptop Per Child project, and author of Being Digital

) on the implications of television going digital. Let’s have some fun and see how many came true:

Digital Video would make the merger of CDs, VCRs, and related devices possible. By the year 2000, our current media systems will be replaced by a single computer-like device that will play and record every form of media.

Anybody have numbers on what the current market penetration of Apple TV and its ilk are? I know this – it’s far smaller than many of us thought it would be by now. Yes, technology makes it possible, but it take longer than expected to get people to change their habits.

Well, maybe to get couch potatoes to change their habits. You could argue that Negroponte’s computer-like device is simply our web-enabled home computer. If you also think about how many people have video-capable iPods, phones that can store music and video, and other similar devices, suddenly Negroponte’s prediction looks a lot more accurate – it’s just not in the living room.

Digital video can be compressed, which means it can be transmitted into our homes faster than can view it. This allows TV to become an “asynchronous” phenomenon: Programming can be transferred in bursts instead of in real time, fueling services such as video on demand.

How true this has become again depends on which room you look into. Television – be it broadcast, cable, or satellite – is still a frustratingly real-time phenomenon. Very few cable systems have true on-demand services (even though they’ve been tested for well over a decade); we need to buy digital video recorders such as TiVos to record real-time streams ahead of time for us to view on demand later.

But once we turn our attention back to our computers and mobile devices, we see a profusion of podcasts and web videos appearing that are indeed delivered as Negroponte speculated. Again, traditional TV is looking rather stuck in the past by comparison.

Another possibility is the ability to customize and personalize what we see and how we see it. The burst-mode asynchronous transmission model mentioned above will allow us to see an event from multiple camera angles or with additional factual information on what we are viewing.

Chalk one up for traditional TV. Through sheer force of bandwidth, we’re able to subscribe to satellite TV sports packages that allow multiple event viewing, in-car camera shots during auto races, and the such. It’s all a bunch of real-time streams, but the functionality is there.

On the flip side, I’ve seen several compelling demonstrations on how clever web applications could be authored in Flash to deliver multiple streams of video as well as additional information during a sporting event. But these are far from commonplace.

I should note that some of the very earliest versions of QuickTime allowed multiple video streams in one file, and the ability to switch between them on the fly. Again, I saw some great demos (including a short film someone had made that included a drama seen from the differing points of view of the various actors), and we many of us thought this was the future. The near future. Not so much, as it turns out.

The picture can be scaled to the desired size upon delivery. Beyond simple picture in picture, this should allow tricks such as viewing an image at the same physical size despite the difference sizes of individual TV screens. This would be particularly useful to ensure text was at a comfortable, correct size – not too big, not too small – regardless of the screen size.

What a fantastic idea! One of my favorite brain twisters I like to hit people up with is how do you design a lower third that works in both HD and on an iPod? Again, it’s hardly new technology; for example, QuickTime has had a text track for years. I think we should work on making this prediction actually come true.

In about 10 years or so (remember, this was written in 1992), we may have model-based TV where the scene is transmitted as a 3D model. The viewer can then pick which perspective they wanted to view the scene from, regardless of the original camera angles.

Not even close for traditional TV. There have been a few shots at 3D on the internet, but that’s hardly a standardized or widely-accepted technology either.

This last one is not a prediction from Negroponte, but a quote from Ervin Duggan, who was then the commissioner of the FCC:

“HDTV represents the commitment that broadcasting will not be allowed to die a slow technological death.”

Given the above list of predictions and reality-checks, traditional broadcast TV doesn’t look very healthy. Most of the innovation has certainly happened on the Internet and mobile media sides of the fence. Now, I’m as quick as anyone to say that a large segment of your audience are couch potatoes who just want to be non-interactively entertained at the end of a busy day, but there certainly is a new generation of technology-enabled media consumers who aren’t sitting on that couch.

Anyone care to predict what the next 10-15 years are going to look like?