I’m more excited about trying FCP X now than I was then but it’s still very iMovie-looking. 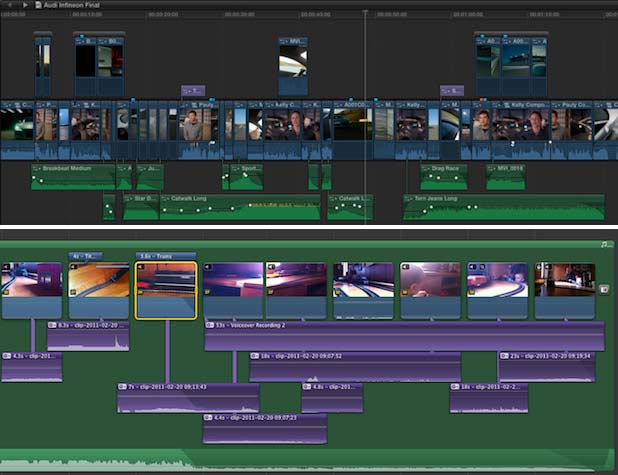 The most interesting tid-bit to come out of the whole Final Cut Pro X preview at Tuesday night’s SuperMeet came not during the hour long on-stage demo but rather it was during the time after as I walked around the SuperMeet expo and talked to a number of developers and fellow editors to get their reaction to FCP X. The reaction was mostly cautiously optimistic. I also happened into a conversation with someone who works for Apple and had been (or maybe still is) on the FCP team. And then when I got home I dug back into iMovie and darn if they really don’t look a lot alike.

Unfortunately I wasn’t privy to the Apple executives who were apparently watching the demo from the front of the room. While this Apple employee I talked to didn’t let out any secrets or new information about FCP X he said a few things that were quite telling.

Discussion right after the SuperMeet.

When he asked what I thought about the demo I was honest: I love the “thinking different” with many new features like Audition. That’s a totally new way of comparing clips during the edit. Secondary Storylines (while a dumb name) is quite nice too as that’s another new concept when it comes to putting an edit together. Keywording could be a God-send in the organization area for the disciplined editor if he/she takes time to set it up properly.

Many things are still just too unknown for the professional editor. Things like the Magnetic Timeline and the new Viewer-less way of marking clips to build that timeline will have to be worked with, and pounded on, before judgement can be passed.

But then I said: “I probably would not want to edit a feature film with that application based on the demo I saw tonight.” My statement seemed quite intriguing to this Apple guy. I went on to explain that, of course, there’s so much we don’t know about FCP X that you have to take that statement at face value, more of a generalization based only on what they didn’t show us in the demo. It just didn’t FEEL like FCP X was ready to handle a 2-hour timeline with bins packed full of 5 or 6 hours of media. Not that it couldn’t (probably) technically handle it but, to me, it felt more like it was designed for the short piece more than longform.

Then he asked me a question that really summed up what we saw in FCP X. He asked if I was around for Final Cut Pro 1.0 some 10 years ago? I responded ‘Of course! That finally gave me an Avid at home.” He then asked: “Would you have edited a feature film in Final Cut Pro 1.0?” I probably would not have edited a feature in FCP 1.0 as it wasn’t a mature enough or robust enough application to handle a feature. Then he asked if I’d edit a feature in FCP 7. Of course I would do that. I have done that! (In FCP 5 or 6 actually).

He said that he thinks of FCP X more like a 1.0 production. “A rebooting of Final Cut Pro” I said. “Exactly” was the response.

After thinking about that conversation for a couple of days I feel like that might be a bit too much of a generalization. I can’t imagine there won’t be the ability to do things like export OMFs for audio mixing, or trade shots back and forth with vfx, or keep many different versions of a cut. Plus FCP X is supposed to be great at tracking metadata (thought it didn’t look like there were too many bin columns that could be displayed in FCP X), which is of great importance when editing a feature. But after watching the presentation again (via the magic of You Tube and Vimeo) and really looking at the interface I think this idea of FCP X being a reboot is a good one, at least until we really test the thing in a real world post environment.

One specific problem that I had with the FCP X sneak preview was that nearly everything done during the demo was done via the mouse. There was only one instance that I can remember where the demo guy actually used the keyboard for an editing task: showing that the Precision Trimmer can trim via the keyboard when he entered a + timecode value. One thing that I wondered was whether or not there was dynamic trimming where a trim could be played out via JKL scrubbing. I was assured that you could. Another thing that I wondered about but didn’t ask about was slip / slide editing. This wasn’t demoed but really seems like something they would have demoed since this was a gathering of professional editors.

Another conversation with a 3rd party developer revealed another piece of information. Apparently Apple has let a few 3rd party develops know where will be some type of API for FCP X. An API means 3rd party developers will be able to write things like plug-ins and utilities. But talking to quite a few other developers reveals that they sure haven’t let everyone know about this possibility of an API. And I’m talking about some of the best, longest developing developers that FCP has had!

If true this is good news as the 3rd party developer community is part of what has made FCP such a success. Success breeds success and as FCP became installed in more and more places there were more and more opportunities to make money making tools that supported FCP. I repeat: FCP would not have been as successful without them. While many of those tools were built to address the current FCP’s shortcomings many more of them are creative tools that enhance the application.To abandon this thriving community would leave a real hole in the FCP ecosystem. During the SuperMeet sneak preview there was no mention made of 3rd party tools for FCP X, no mention of an upcoming API. It stands to reason that a rewritten FCP would require rewritten plug-ins (which is certainly known by 3rd party developers) so the sooner developers know how to move forward they can proceed. It just seems like Apple could have made a mention of supporting plug-ins since many of those developers I talked to know absolutely nothing about what the future holds for their tools. And more than a few of them are worried. In fact Apple could have taken a few seconds to mention any number of things that would have gone a long way toward putting a lot of those questions we are all asking now to rest. But they chose not to.

Any discussion that is had about FCP X at this point in time always winds back around to the same conclusion. We just don’t know very much about what is in store for FCP X. My guess would be that a select group of trainers and developers might get brought into the circle and blessed with their own version of FCP X so there will be some training materials and 3rd party tools when FCP X ships. If they are going to do that though they better get on it. June isn’t that far away.

Next Up: That FCP X interface shares a lot with iMovie, with images.

It has been just under a week since SuperMeet and I have to admit that I am a bit more optimistic today than I was from when I left the SuperMeet. Not so much because I think FCP X is going to be the NLE that blows every other NLE out of the water (far from it) but because it really looks like FCP X will bring some new thinking to the way our NLEs work and how we work with them. I’m always intrigued when a manufacturer tries a big change in the software we know and love. The Avid Smart Tool was certainly a big change (which I love) but FCP X is going to certainly be the biggest change I’ve ever seen in a single upgrade to an NLE. Apple is the only company who could really do this. If Avid did it there would be editors with pitchforks at corporate headquarters trying to burn the company down.

Here’s a few screen shots of both the FCP X feature that was demoed and something similar from iMovie. 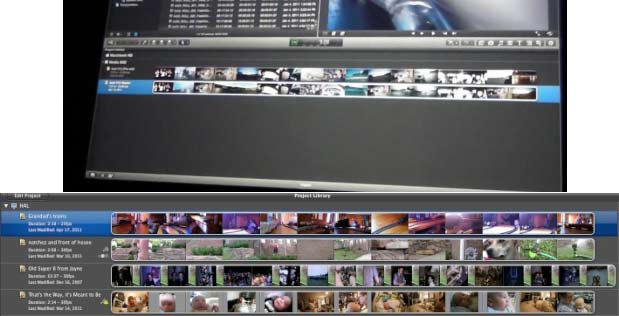 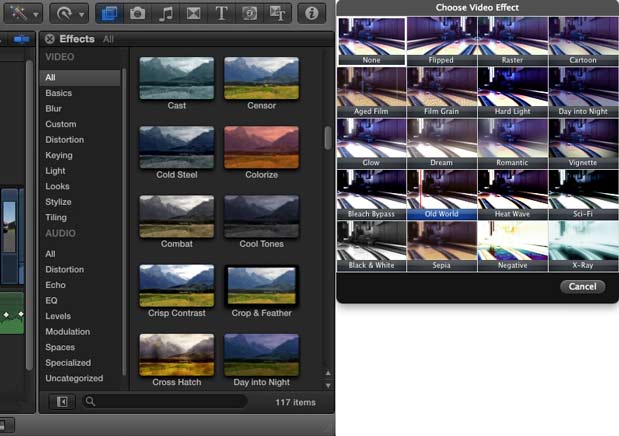 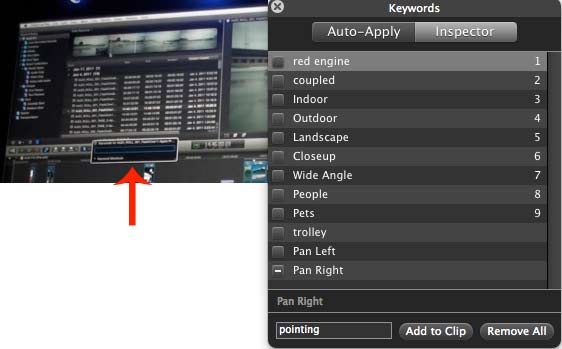 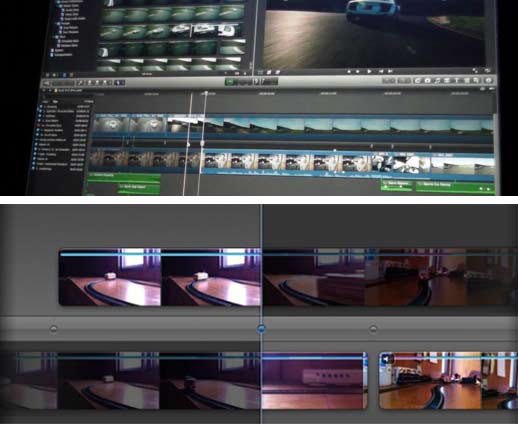 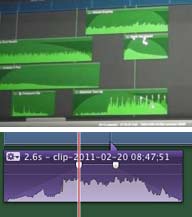 A timeline from iMovie (that doesn’t come to look like this without a bit of work).

There’s a lot in iMovie that’s decidedly FCP X like. To see how I arrived at that iMovie timeline I grabbed a screen capture:

The iMovie magnetic timeline from Scott Simmons on Vimeo.

And if you haven’t seen the FCP X demo from SuperMeet, here’s that too:

While I knew instantly the FCP X interface had many similarities to iMovie I had no idea that at least the visual elements of the timelines would so closely resemble each other. Granted it’s a whole lot more work to get the iMovie timeline to look that way but you can certainly see where the inspiration has come from. That is unless FCP X has been in development for years and this stuff has trickled over to iMovie. This post does a nice job discussing FCP X and iMovie’s shared DNA. I would disagree with a comment I saw in another post that says iMovie is a “freaking joyful to use ‘consumer’ product” as it seems mighty frustrating if you’re used to the freedom of a regular NLE.

In order to answer the question of exactly how this new FCP X is going to combine these features from a consumer based iMovie with professional features that editors are going to need we have to have FCP X in our hands. That’s pretty much a no brainer but until June rolls around we’ll still discuss FCP X ad nauseam because it’s one of our primary tools … and because it’s Apple.