What the two big camera companies taked about officially. 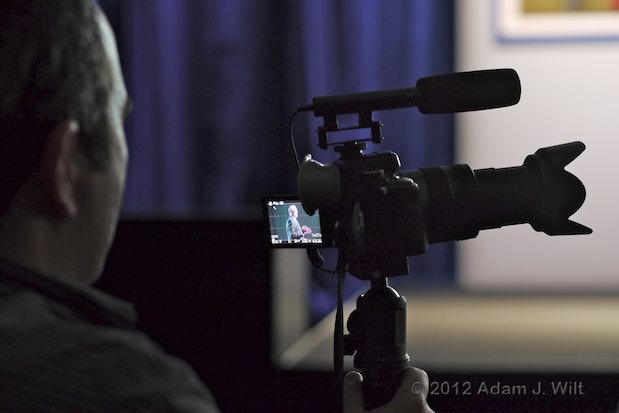 One of many GH2s being used to record the Panasonic press conference.

When big companies hold press conferences, they’re a mix of marketing / sales encomiums from happy customers, and some actual useful information about technologies and products. I’ll mostly focus on the tech stuff that Panasonic and Sony announced today (and adding my own snarky commentary in [square brackets]).

Theme is “Xtraordinary performance for the real world”. [Due to supply-chain problems in post-tsunami Japan, Panasonic is apparently short of capital “E”s this year.]

Panasonic’s “Shoot It | Share It” contest this year concentrated on AF100 content (The Panasonic micro-four-thirds LSS camcorder). Graham Streeter’s “This Guy’s in Love with You” won the grand prize.

New HPX255, $7000 uses a remote operations panel for remote control/shading; first time that I recall seeing this level of professional remote control in a 1/3″ handheld (though the Sony NXCAMs with the RM-1000 remote come close).

HPX600 this fall: 2/3″ with LiveU video uplink (future option), AVC Ultra compatibility in the future; think of a future-proofed 2/3″ big brother to the HPX370. 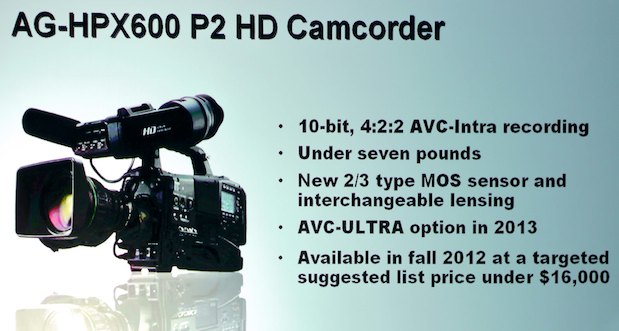 Left side of the HPX600 mockup. 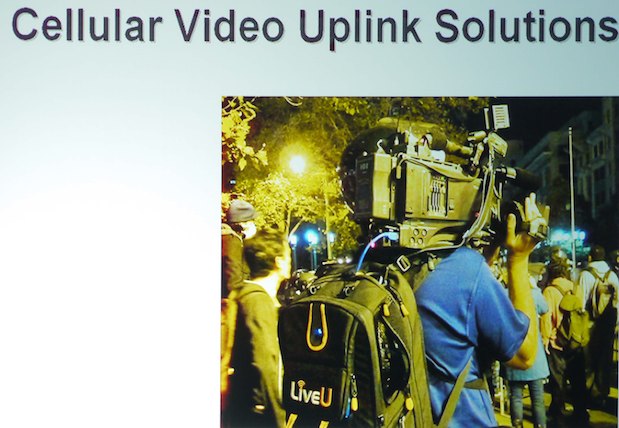 How the LinkU system currently works. There will be a dockable module for the HPX600 in the future. 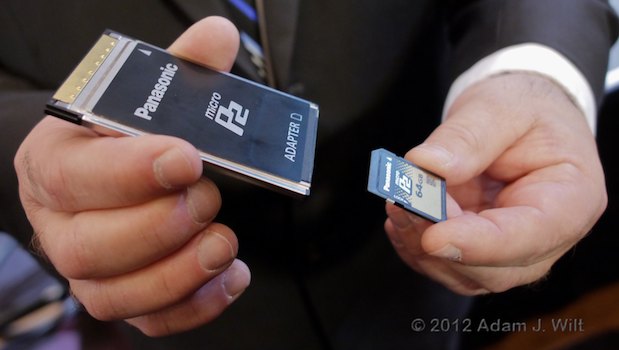 Micro P2 card and adapter. Adapter is the size of current P2 cards.

4K concept camera shown; NOT a product yet, but Panasonic’s “balsacams” have a history of turning into real products in a year to 18 months, so this looks, shall we say, interesting…

Left side of the 4K Varicam mockup. 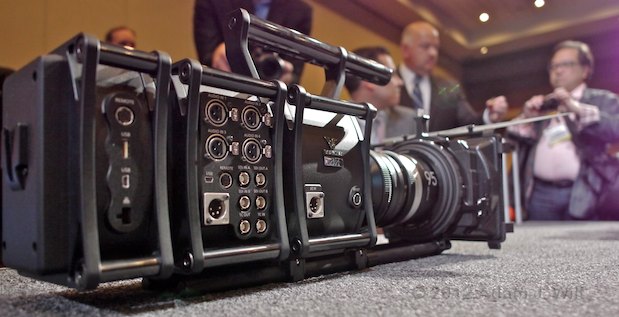 Right side of the 4K Varicam mockup. 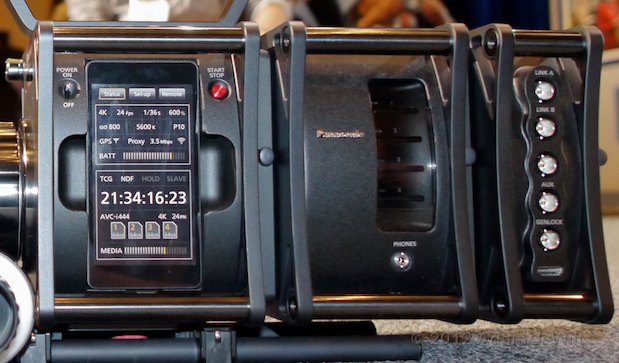 Details of the 4K Varicam left side.

Overall: a real focus on systems-level integration / extension / maturation; aside from the 4K Varicam mockup it’s all solid, workaday stuff expanding and filling in the product lines, codecs, and storage media for file-based workflows. Incremental upgrades to existing products (often with upgrade options for cameras and switchers in the field; very nice) rather than groundbreaking new stuff. No focus on 3D, which some Panasonic folks said to me hasn’t been the breakthrough product category they’d hoped it would be. 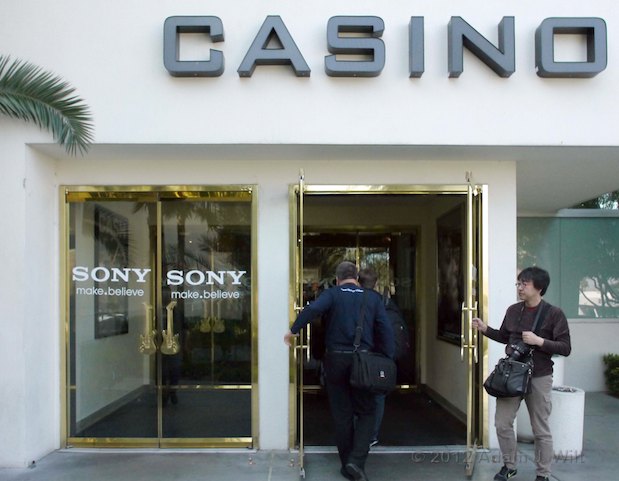 I’m sure there’s a message here…

Show started with a 3D preso of crazy surfing Aussies (“Storm Surfers” or some such) shot with Sony 3D camcorders, and an upcoming 3D breakdancing feature. 3net 3D channel; ESPN 3D; Sony is a sponsor of the 3D X Games; 3D in China with Sony; Sky Broadcasting of 3D. Prototype glasses-free 3D viewing at the booth. [Sony clearly believes in / is actively advancing the cause of 3D, despite lukewarm customer uptake.]

Photos of the Sendai tape manufacturing plant, following the tsunami and after reconstruction. 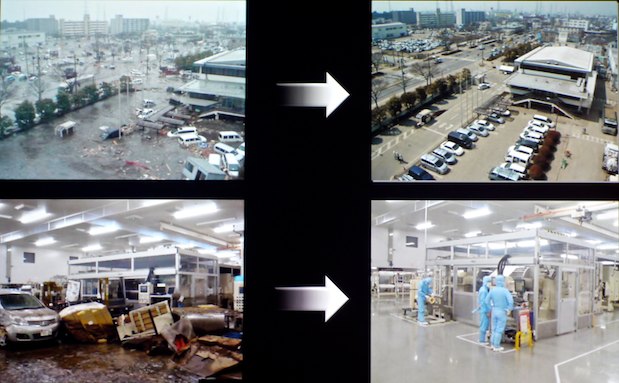 Sony may wind up suing BandPro if BandPros’s suit against Arri for misappropriation of trade secrets harms Sony’s business [it’s a long and convoluted story, trust me. I don’t expect it to have a material impact on either Sony’s or BandPro’s business; I mention it here simply because Alex Shapiro mentioned it almost as an aside, and I know that a bunch of folks are following the soap opera with horrified fascination].

NEP, a multidimensional teleproduction company doing studio and OB truck work: Sony will be the exclusive supplier of hundreds of HDC2500 cameras. The 2500 succeeds the HDC1500, with 2 stops of added sensitivity, they think it’s “the finest broadcast camera available”. 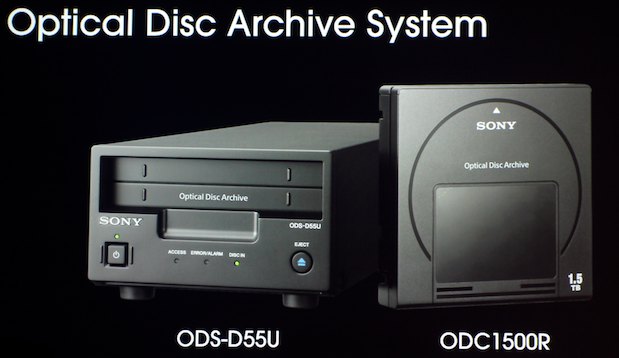 Sony’s Media Backbone media asset management system / infrastructure will be used by NBC to handle assets for the 2012 Olympics “Highlights Factory”. NBC Sports will be focusing on the XDCAM 50Mbit 4:2:2 format going forward.

NXCAM series: a palm-sized camcorder (HXR-NX30), and the FS700 LSS super-slo-mo-capable cam, of which I have already spoken in days gone by. 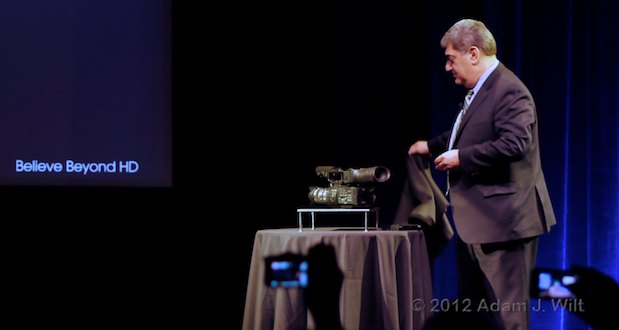 The NEX-FS700 unveiled (that’s the very camera I was using last week; I returned it to Sony on Saturday night).

F65: two features in production, including M. Night Shyamalan’s “After Earth”; Shyamalan talked (on video) about how he though he’d die a film guy, but the F65 changed his mind: it captures a rich and pleasing image, and performs very well in low light.

Sony is opening a Digital Motion Picture Center in Hollywood.

TV Globo is a big supporter of 4K for the home; shot Brazil’s Carnival in 4K 60p with F65: extreme color, fine detail, strong contrast. Projected image looked fine; I’ll try to see it close up in Sony’s 4K theater in their booth later this week.

Overall: an awful lot of customer testimonials about how great Sony gear is. Not much in the way of new product intros [but perhaps I’m just jaded after fooling around with an FS700 all last week?]. Sony is still very big on 3D: we all had RealD glasses on our seats to watch the opening 3D clips, which were admittedly very nice, though I’m guessing the edge violations, reflection, and extreme close water spray in the surfer film may have put 3D-queasy folks off their feed for a bit!

Disclosures: I’m attending NAB on my own dime, and with a press pass to save the cost of admission. Neither Sony nor Panasonic has offered me any material consideration for a positive writeup, though the Panasonic press folks gave me a USB drive with press releases and high-res images on it (which I’ll return to ’em on Monday), and the Sony folks gave me a Coke.

All unlabeled images copyright Panasonic or Sony, depending on which section they appear in.