And don’t forget about the little red shark 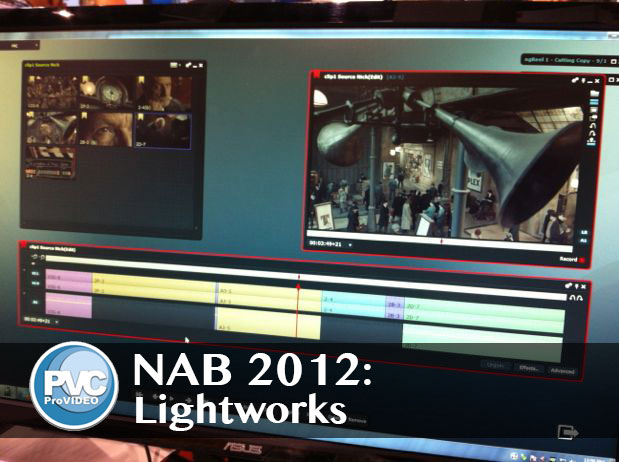 One company that I wanted to be sure and check out at this year’s NAB was EditShare see how they’re coming with Lightworks. I don’t have a Windows machine so I haven’t been able to download it. Their Mac version has fallen behind schedule but they were showing a Linux version running on a laptop at their booth. The official Lightworks release is scheduled for May 28. It’s been many years since I’ve seen a Lightworks running in the real world but I remember them fondly. In fact a Lightworks was one of the first machines I ever assisted on back before I had ever really used an Avid. I’m happy to report the shark is still there.

Lightworks was always a quirky machine (see the reference to a shark above) and it’s still a little bit funky. The old Lightworks would see you entering a project through a door to a room. The doors are gone but the rooms are still there. But it’s really just an NLE like any other NLE: timelines,windows full of footage, effects, things like that. 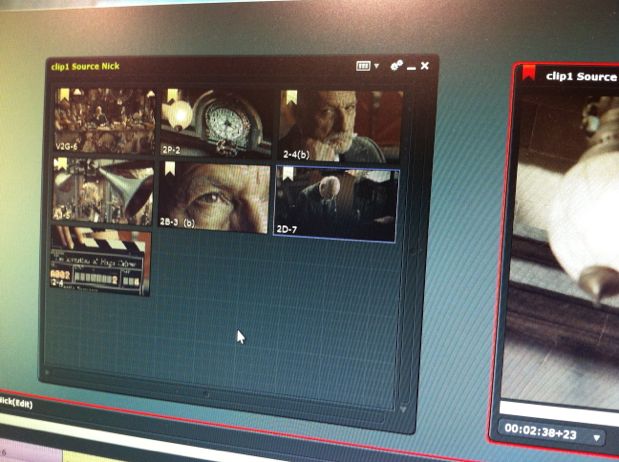 The Editshare booth was using footage from HUGO for the Lightworks demo.

The first thing I noticed as they went through the demo was that there are a lot of windows that float around the interface. It felt quite cluttered but I think that may have been more because of the demo running throughout the day than anything else. A little window management or assignable workspaces might fix this issue. I don’t have any idea if there are assignable or template-based workspaces or not. 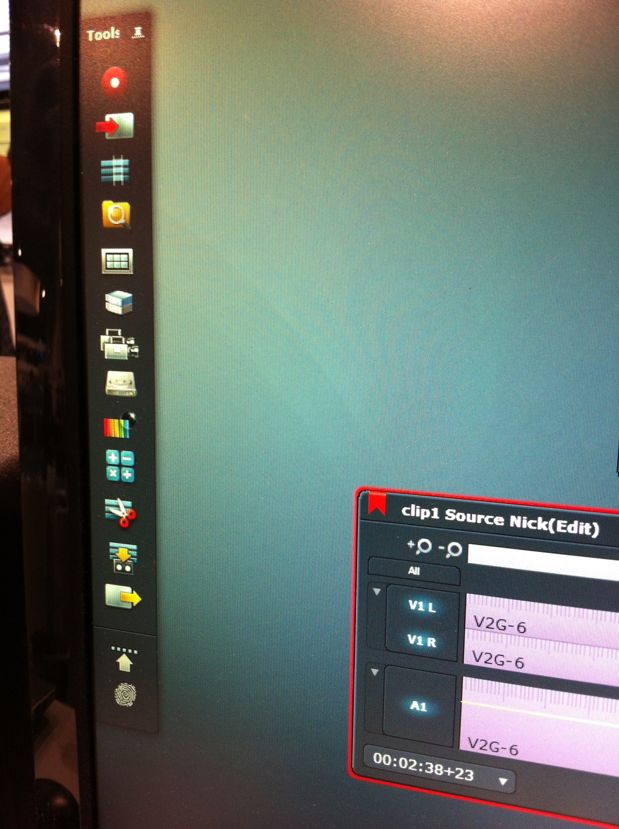 Edit tasks and tools are located in a button list on the left side of the interface.

Down the left side of the interface there are little buttons that correspond to the different steps and tasks in post production. From input, through the edit, all the way to output, including things like multicam, tape out, hardware monitoring, timecode calculator. Footage can be organized in a bin and edited into a timeline just like any other NLE. There’s also Lightworks’ own version of a source and record monitor. It doesn’t necessarily look like an Avid or Final Cut Pro interface but there is traditional three-point editing. It seemed a bit cumbersome when I asked the demo to duplicate a current cut as it had to be searched for in order to find it. I remember this from the old Lightworks; there was often a lot of using the search command. 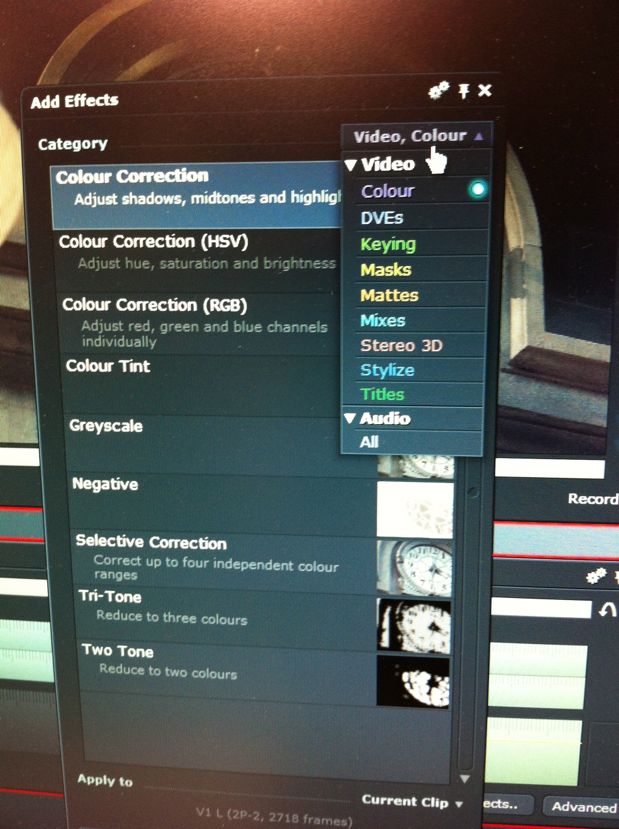 There’s a lot of effects just like any NLE.

There are effects that can be called up, placed and stacked on the clips just like in other NLEs. You get a tiny reference in the timeline to clips that have effects applied. Effects are keyframed and adjusted through an effect editor. Color correction also has the usual shadows, midtones and highlights color wheels. 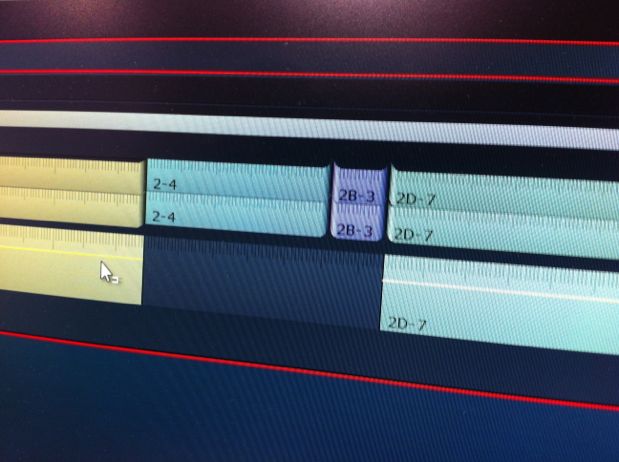 Powerful trimming is another of Lightworks’ strong points. Notice the edit points indicating a trim by the way they look like they are curled under.

Lightworks looked to have rather powerful trimming capabilities (including asymmetrical trimming) as well as the demo artist trimmed multiple points at a time. As expected there were rolling, ripple, slip and slide trims. When trimming the Lightworks timeline shows the edits you’re trimming by sort of “curling under” the edit points. It’s hard to explain without seeing but it’s a pretty cool visual way to see what you are trimming and a refreshing change from what seems like the norm of red and yellow trim indicators. 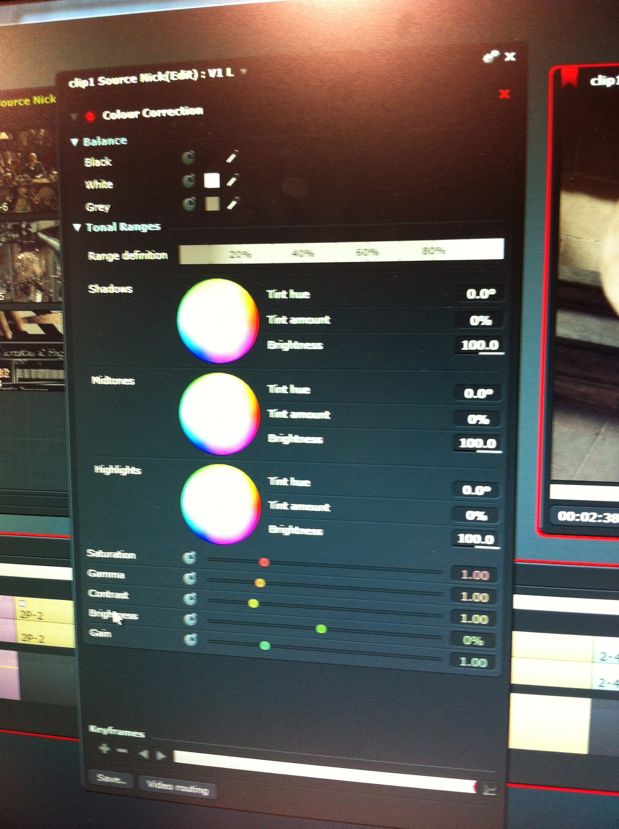 Those color correction controls look familiar even though this iPhone photo is kinda blurry.

I guess I was a bit surprised how “normal” the Lightworks interface face looked but I’m not exactly sure what I expected. I probably would have been more surprised if it had been very unusual since Lightworks cut the recent Oscar winners The Kings Speech and Hugo. Don’t get me wrong, the Lightworks interface is as different from Media Composer and Final Cut Pro as FCPX is but it’s not so different that it can’t be understood. 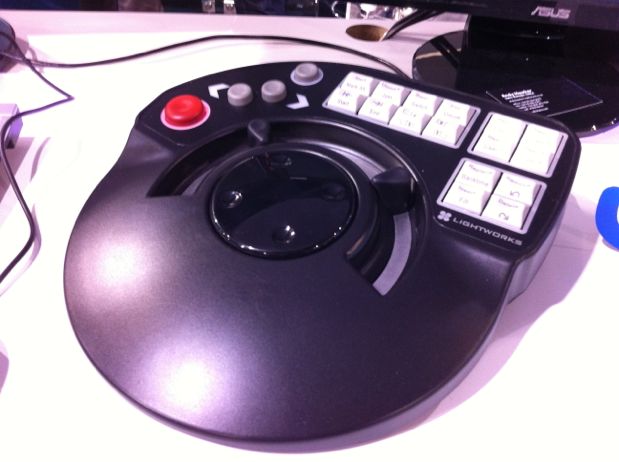 The Lightworks hardware controller has long been an important feature of this NLE.

Lightworks has always been known for its hardware controller and that current controller is still around. It’s a sturdy, well-made machine with a jog shuttle lever, a scroll wheel and a bunch of button for Mark IN and OUT tasks as well as edit tasks. If you go Lightworks the edit controller doesn’t come cheap as it’s priced at around $3000. They are precision hardware made in small quantities. But when you consider Lightworks is going to live on a “freemium” model then I guess a few thousand for something Lightworks isn’t too crazy. I couldn’t help but wonder if it came in a left hand version.

The free version of Lightworks gets a lot of bang for zero bucks. The Lightworks website goes over details on all the features and supported codecs. If you choose the subscription-based model it will set you back only $60 a year. That’s unbelievably reasonable. 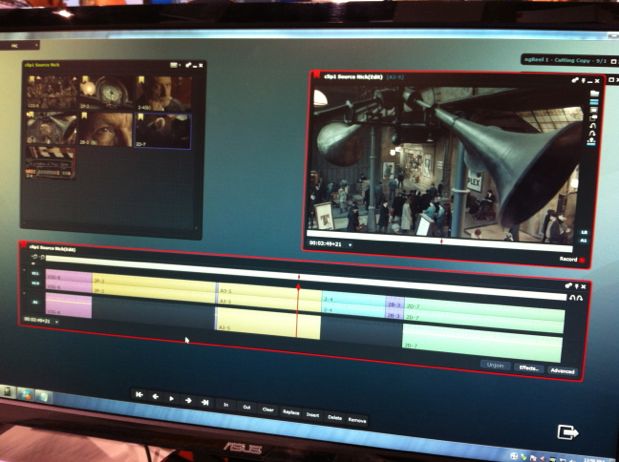 A look at the entire Lightworks interface.

On the surface it looks like Editshare is a little crazy to have taken over the Lightworks brand which they continue to very actively developed. The Linux version was on display at the NAB show and while the Mac version has been delayed it’s still on track and under development. I mentioned repeatedly to the Editshare guys that once a Mac version is ready we will see a lot more interest but they said they’ve seen over 250,000 downloads of the current Windows version. I think they are quite proud of that download number and Lightworks looks to be a pretty big part of the overall Editshare strategy going into the future. I’m not exactly sure what that strategy is but apparently someone at Editshare does since Lightworks lives on. 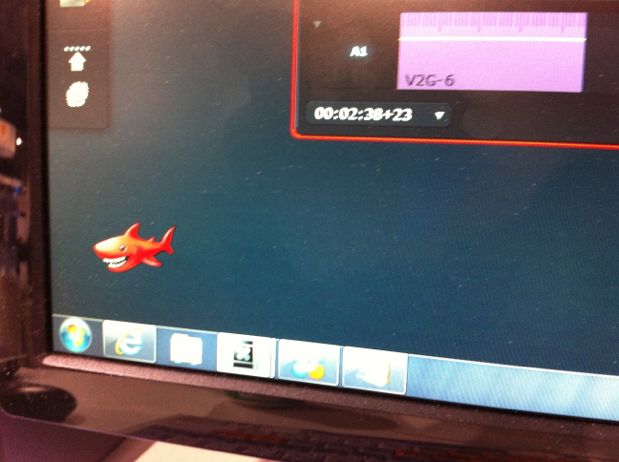 Best of all Lucy, the little red shark, lives on in the corner of the Lightworks screen so if nothing else it shows these guys still have a good sense of humor. What does a shark in an NLE interface do? Why it eats up the open windows of course. Why waste time clicking a close window when you can use a shark?

Edit share is certainly going to get some interest in Lightworks and they’ll see a lot of downloads as result. They’ll see a lot more once the Macintosh version is available. I’m not sure at what point it becomes worth the development resources but you have to give the folks at EditShare an A for effort. We’ll see how it goes a year from now.

Here’s a couple of Lightworks videos if you’re interested:

Mr Blurry Cam of the Linux version running on a laptop.

This is a more in-depth interview with David Shapton, Managing Editor Lightworks Publications.