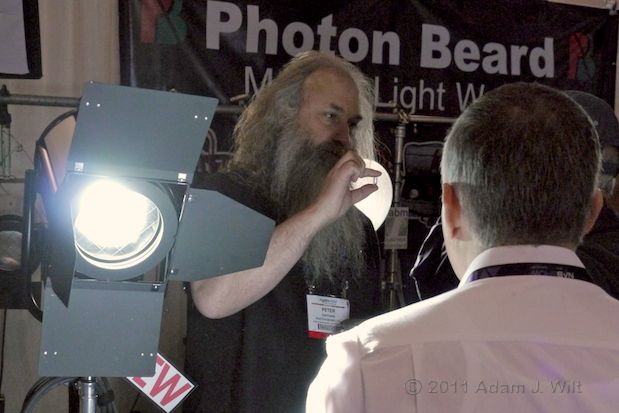 The Photon Beard Nova, and what’s at its heart.

Here’s the coolest “new thing” in lighting I saw at the show: Photon Beard’s Nova, a focusable Fresnel-type instrument using a LEP (light-emitting plasma). It’s unlike any other lighting instrument we use—other than the sun—in that it doesn’t pass electricity directly through the light-giving element (tungsten filament, diode junction, rarefied gas surrounded by phosphors, carbon arc, etc.).

Instead, it focuses a whole lot of RF energy onto a tiny glass capsule containing a mixture of gases. The gases, thus energized, become a plasma (the fourth state of matter), and emit a whole lot of broad-spectrum, high-CRI light. 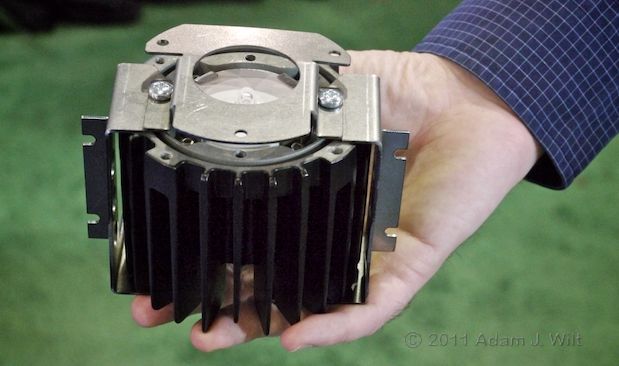 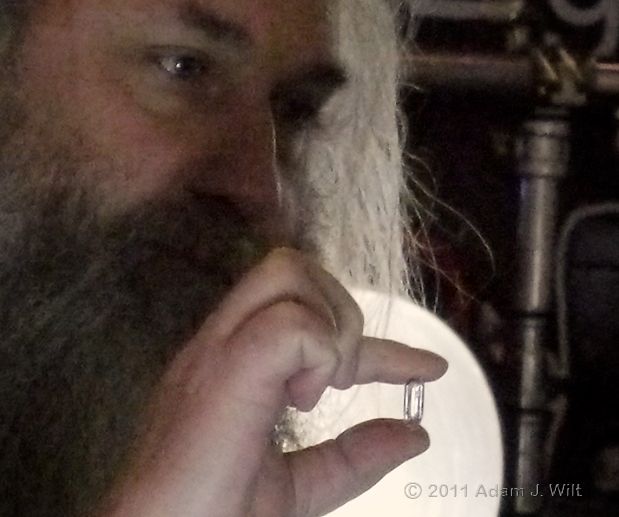 Peter Daffarn holds the tiny capsule from which the Nova’s light emerges.

Plasma lighting has been used in various industrial applications for the past few years, but this is the first time it’s been put into a production-industry instrument. Think of a 20,000-hour lamp outputting the equivalent of a 2K tungsten lamp on 273 watts of power, and you’ll get the idea.

Sadly, the instrument is about US$5,000 at present, but it’s only the first such luminaire on the market; prices will decline over time.

I should note the Managing Director Peter Daffarn’s beard is not the “beard” in “Photon Beard”; the company was founded by a Mr. R. R. Beard in 1882. However, it was suggested that having a beard doesn’t hurt if one wishes to be an officer of the company.

The Problem with LEDs

One of the Tuesday seminars at NAB was the Academy of Motion Picture Arts And Sciences presentation on the Solid State Lighting Project, which addressed the whole issue of spectrally “peaky” light sources like LEDs. 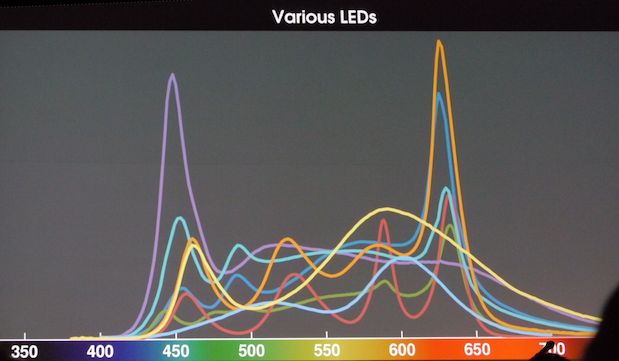 The spectral sensitivities of a recording medium (whether the three layers of a color film, or the three color filters of an electronic sensor) have been designed for and balanced to the smooth, even emission spectra of “broadband” lighting sources, especially the tungsten lamp. 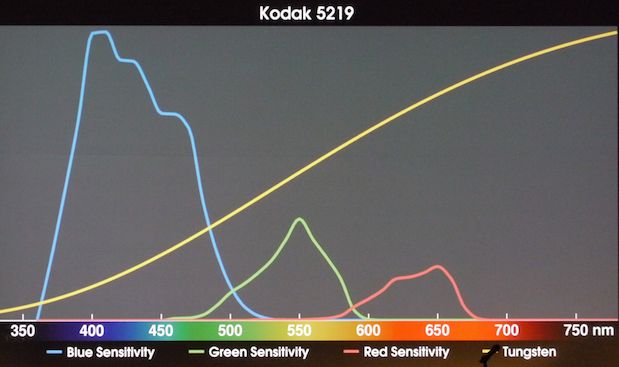 Spectral sensitivities of 5219 film’s R, G, and B layers, and tungsten’s emission spectrum.

When you light a scene with a “peaky” source like LEDs, and photograph it with a “peaky” recording medium, the resulting colors can vary quite a bit, depending on how the peaks in the light’s spectrum line up (or fail to do so) with the sensitivities of the medium. 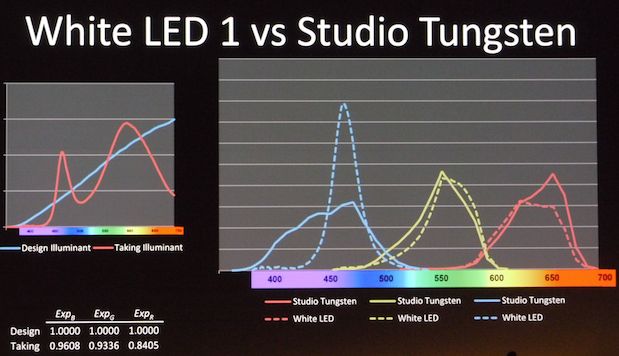 The result is that scenes lit with “white” LEDs that look to be perfectly color balanced, and under which your scene’s subjects, makeup, clothing, and props look perfectly natural, may photograph surprisingly differently than they appear.

I highly recommend that you go to the AMPAS Solid State Lighting Project page and watch the videos, which include the same presentation that AMPAS made at NAB, and the test clips that were shot to illustrate the problems. Be afraid. Be very afraid…

…or just be forewarned, and thus forearmed: if you understand the issue, you can test for it, and avoid unpleasant surprises.

One of the possible solutions (or at least ameliorations) is the use of multiple colored LEDS to help fill in the spectral gaps of “white” LEDs (as Art Adams wrote about a couple of years ago).

AastroLight caught my eye with this quad-headed prototype on-camera source: 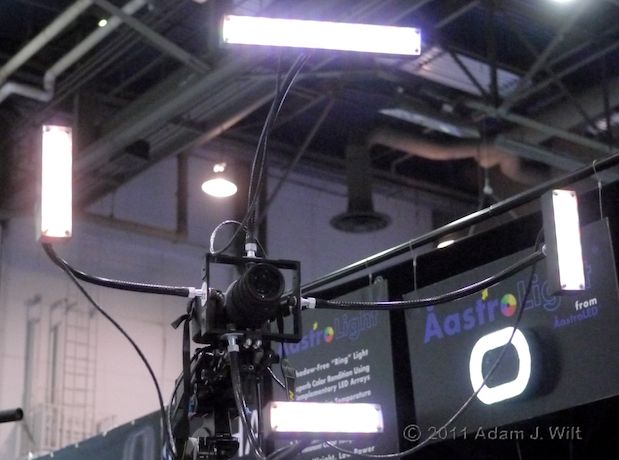 AastroLight uses a combination of five colored LEDs plus “white” LEDs to get a broad spectrum with fewer gaps and high tunability: 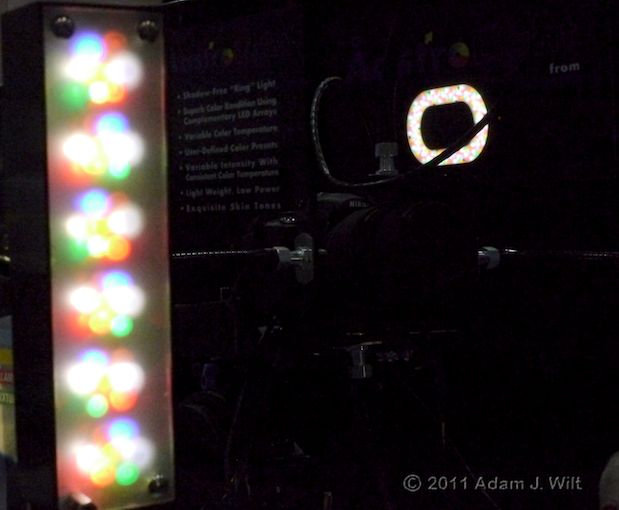 The back side of their ringlight shows the possibilities such a selection of LEDs offers: variable color temperature as well as variable brightness. 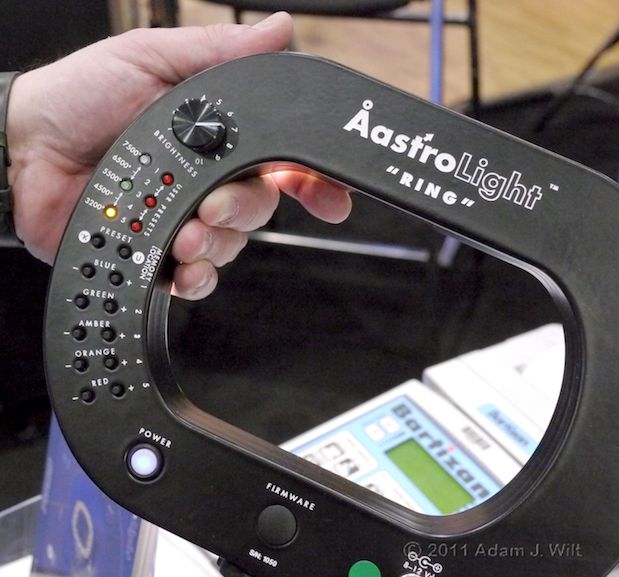 Color and brightness controls on the AastroLight.

The PRG Ohm Light, the Kelvin TILE that Art worked on, and the kezia have similar color-temperature tunability and a smoother, less surprise-inducing spectrum than a white-LED-only light is likely to offer.

Of course there was also an entire aisle of the show filled with “white” LED lighting from dozens of Chinese companies that I’d never heard of before; each offered more brightness for less money than the last (well, if you lined ’em up in the right order, that would be the case). All their instruments looked just fine to the naked eye. How these lights interact with cameras to render actual colors, though, is left as an exercise for the reader…