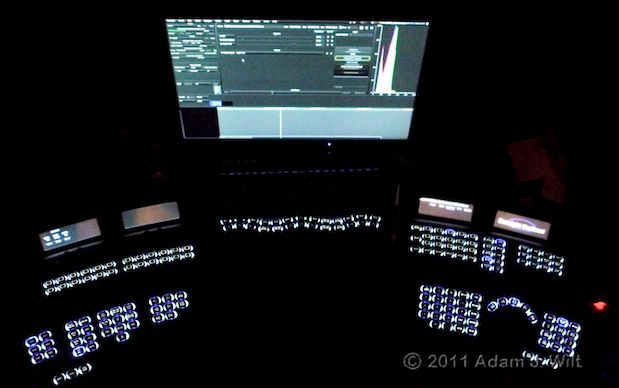 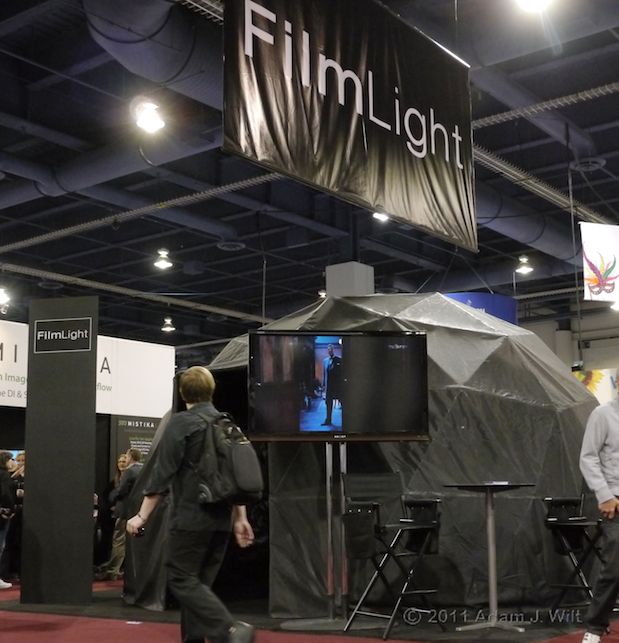 Scott Simmons has already done a great writeup on Baselight and Blackboard 2, so I’ll just add a few notes.

Baselight for FCP, when it’s released in the Fall, will be able to do much of what it does by taking a frame handed off by FCP and processing it using OpenGL, then returning to processed frame to the FCP pipeline. While it doesn’t have the full power of a dedicated Baselight grading system, it does have all the OpenGL power your GPU can throw at it. Baselight for FCP will do most of what a standalone Baselight system will, though certain complex processes, like temporal noise reduction, won’t be possible using the plugin. 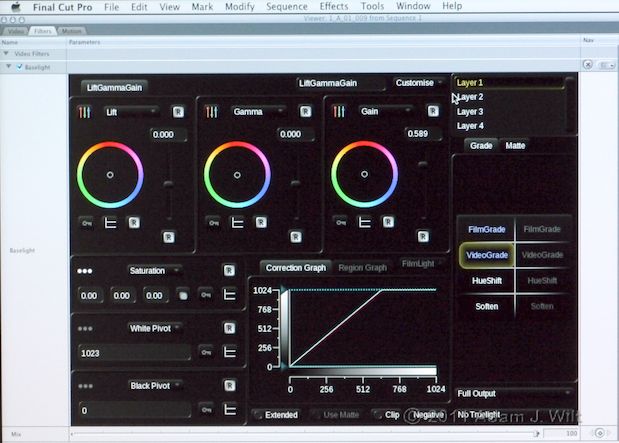 The Baselight UI crammed into the FCP Viewer’s Filters tab.

Obviously, squeezing down the Baselight UI into the constrained space of the FCP Viewer window leads to a few compromises; the control window is multilayered with buttons to bring up film grade, video grade, and secondary panels, and the shades-of-black design sits somewhat awkwardly in FCP’s light-gray scheme. The size of the Baselight window also requires considerable real estate; the Viewer winds up occupying most of the screen, even on a high-resolution display (I wonder if FilmLight will look at how Color Finesse allows a limited UI within the Filters tab but offers a button to launch a separate grading window for the full UI).

The Blackboard 2 is a fully-reconfigurable control surface. As Scott shows in his video clip, the keys themselves are small displays, so can be repainted to show whatever icon, text, or moving image is called for. Many high-end grading surfaces have moved in this direction—reprogrammable text, individually-selectable LED colors—but Blackboard 2 takes this repaintability about as far as it can go. (Clearly, the next step in control surface evolution has to be physical: a “soft surface” that, in reconfiguration mode, allows you to physically drag the buttons, pots, trackballs, rings, and tablet into new positions! Some would argue that this is entirely possible today with screen-based control surfaces, but I counter that such surfaces lack the tactility and haptics that keep enormous and insanely-expensive devices like grading surfaces and production switchers / vision mixer panels on the market in their current, bulky, entirely corporeal forms.)

Finally, FilmLight will be the non-US distributor for the Visionary Archive process discussed at HPA. It’s a perfect complement to Filmlight’s NorthLight film scanner.