In which I look obsessively at a Swedish design statement, almost to the exclusion of all else.

There wasn’t one overall theme to the NAB camera announcements. 4K cameras and HD-resolution LSS (large single sensor) cameras shared the spotlight with workaday small-sensor cameras packing ever more features into the same sorts of form factors we’ve seen for years. But Sony did make a leap into uncharted waters with the NEX-FS100, while Ikonoskop’s A-cam dII throws out all the rules, rethinking camera design from square one. [Updated 2011-04-30: corrected F65’s sensor size.]

Jim Jannard of RED told me that he thinks 2012 will be “the year of 4K in the home”, and he’s building a 4K home theater projector just in case no one does (if someone else makes one, RED will stop working on it; RED just wants to make sure that somebody builds one. True, JVC has a “4K Home Cinema projector”, but I think RED is trying to kickstart the market for something more affordable than US$175,000). RED and DALSA were the first to have 4k-capable digital cine cameras; DALSA subsequently withdrew from the cine market, leaving RED (and later, the Vision Research Phantom 65) to carry the torch, but this NAB saw at least three new 4K cameras, and that’s not counting the Meduza 4K stereo 3D concept camera.

Sony, of course, showed the F65, using a 3-perf-Super35mm-sized, 20 Megapixel sensor, recording 4K to HDCAM-SR 2.0 (the memory slab format seen at HPA this year). F65 footage was shown on a 4K SXRD projector in a small theater; the image was stunning in its clarity, depth, and dynamic range—both RED and Arri should be warned that there’s a new kid on the block as far as high-end imagers are concerned. I’m not sure if Sony’s sensor is developed from the Q67 imager discussed at HPA last year; there was some chatter about diagonal photosite arrays amongst attendees, but Sony’s F65 site doesn’t answer things one way or the other.

Japan’s Astrodesign, best known in the USA for their high-end on-camera engineering monitors, has its own line of 4K products Their 56″ 4K LCD has been around for a while; this NAB was where I first saw their 4K camera and SSD recorder: 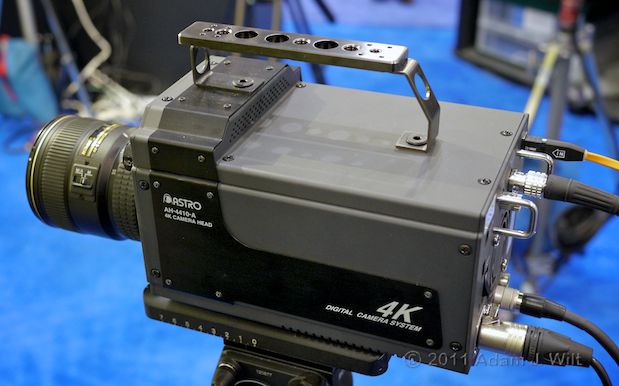 Astrodesign wasn’t the only one with a 4K monitor; JVC was showing a 50-plus-inch 4K LCD in their booth: it looked just fine. JVC fed the monitor with clips shot using a prototype 4K prosumer camcorder, no bigger than the usual palm-sized HD camcorder you’d find at Frys or Best Buy. The darned thing was in a plexi case and lit in such a way that neither existing-light nor flash photography did a good job of capturing it; Jon Fauer took the bold step of asking the JVC folks to remove the case, so he has a decent picture of the thing, as well as a writeup that (as always) is worth reading.

The big shocker of the show as far as LSS cameras went was Ikegami’s HDS-F90 four-thirds PL-mount camcorder. Ikegami: who woulda thunk it?

There were also the Sony PMW-F3 and NEX-FS100; I’ll say more about the FS100 in a bit. Panasonic’s AG-AF100, not quite four months old, attracts a wide range of third-party add-ons and accessories.

Panasonic also showed AVCCAM (AVCHD) stablemates of the HPX250, the AG-AC130 and AG-AC160:

Over at the Sony booth, 4K and 3D were getting most of the attention, but there were still advancements to “normal” cameras for the rest of us: the HXR-NX70 is a dust- and splash-proof NXCAM (AVCHD) camcorder. Sony had the poor thing in an aquarium, undergoing an endless downpour: 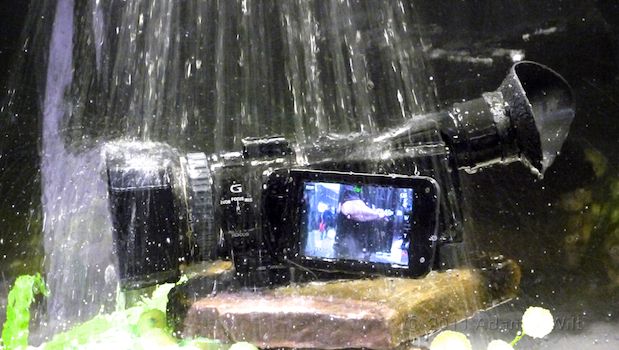 The much-put-upon HXR-NX70 shows a picture despite a drenching.

Mind you, popping open any of the weather seals on the NX70 to connect external audio, change a battery or SDHC card, or the like, will let in all the nasty stuff, but for those shooting in dusty (desert), windy (Chicago) and/or wet (Oregon) conditions, this little $3200 camcorder will be a real boon.

Over at JVC, despite the 3D and 4K models being shown, the emphasis was on the GY-HM750, the latest iteration of the long, low shoulder-mount ProHD camcorder family, which JVC calls the “compact shoulder product line”. The basic form factor has remained unchanged for years, even as the recording format has evolved from HDV tape to XDCAM EX on dual SHDC cards—if it works, why mess with it? The design is very user-friendly and delightfully stable to shoot with; JVC has a good thing going here, and they’re clever enough not to change for change’s sake alone. 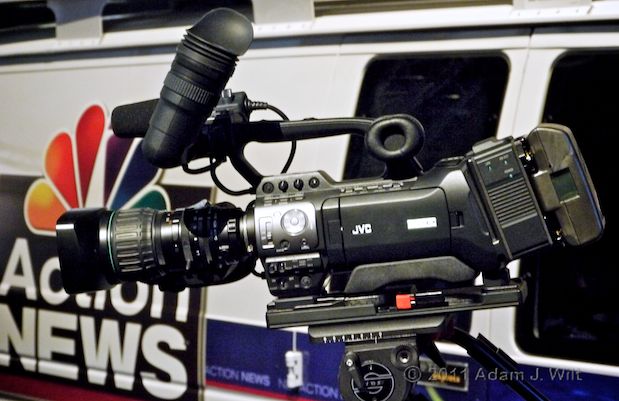 JVC’s HM7xx-series cameras have a strong presence in ENG.

Like the 790, the 750 builds on the earlier 700 with a 20-second preroll cache, the ability to record on both SDHC cards simultaneously (for real-time backup), and standard-def DV recording as either .AVI or .MOV files. The 750, however, lacks the multicore/fiber expandability of the 790—and saves over $3500 in the process (JVC has a nice comparison of the solid-state ProHD camcorders to sort out these details).

Every camera gets its iconic 15 minutes of fame, courtesy of the JVC booth’s ever-changing lighting.

The Sony NEX-FS100 has taken a fair amount of flak for its oddball design: it’s a boxy camcorder with top-mounted LCD and an off-center, removeable, rotatable handgrip. Nobody seems to find it very handholdable.

Well, quit whining. It wasn’t designed to be handholdable. It’s designed as a cine-style camera (as befits something with a super35mm-sized sensor), intended to be mounted on a tripod or on a shoulder rig. I get the impression that Sony threw in the silly little handgrip simply because they couldn’t stop themselves, not because they intended folks to go out and shoot handheld with an unadorned FS100.

Compare the FS100 to RED’s EPIC and Scarlet: 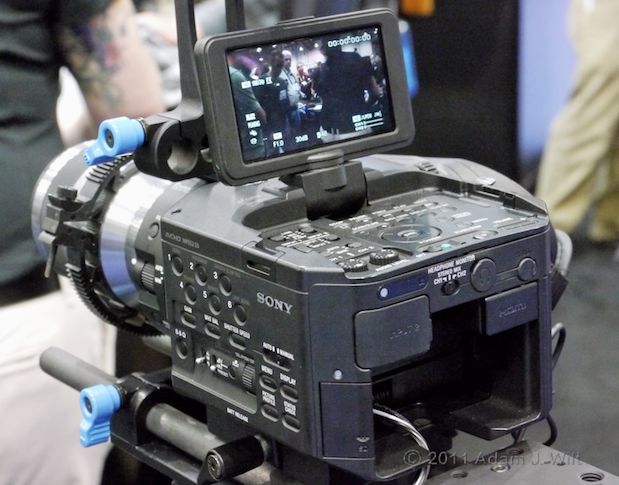 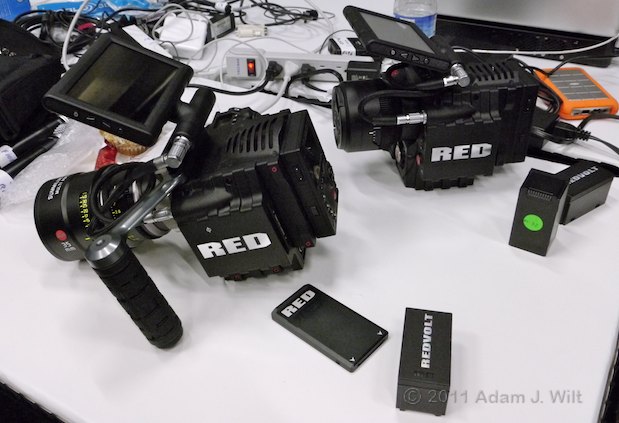 A RED EPIC, a Scarlet, and accessories.

Hmm, boxy body, top-mounted LCD that swivels to either side and tilts forwards and back… mere coincidence, or something more sinister?

Last year, Art Adams and I were invited to New York by Sony to participate in a focus group on camera design. We talked about the need for accessory attachment points (the FS100 has quite a few, albeit in some unusual locations), for being able to operate the camera from either side (hence the plethora of top-mounted controls, and the ambidextrous top-mounted LCD), and how we thought the EX3’s EVF worked very well (thus the viewfinder eyepiece that snaps onto the large LCD). We also debated the possibility of making a handheld camera that was supposed to balance properly with any of a wide variety of interchangeable lenses on the front.

We then flew home, and that was the end of it. Or so we thought.

Imagine my surprise on seeing the FS100 for the first time at NAB, and hearing Juan Martinez point out the features that Art and I and others in the focus group had discussed. My reaction bounced between delight and mortification—yes, accessory mounts, but why so many on the bottom plate? Why is the VF tube so long? Where are the mounting points for support rails? How does this thing actually handle?

All I can say at this point are three things:

1) Don’t judge it by handycam standards; think of it as block camera, more like a RED ONE: something that needs building up with support gear to be workable.

2) Zacuto, Red Rock Micro, Cinevate, and the other build-a-rig folks are gonna have a field day kitting the FS100 out for handheld work!

3) I’ll be interested to see how it works in the real world, both with and without supplemental support gear.

Most of what RED had to show was newer iterations of EPIC and Scarlet, and new support gear. RED also announced “RED Dragon”, a future sensor upgrade for EPICs that will move beyond the M-X sensor in various, as-yet unspecified ways. What caught my eye was the wireless remote control via iPad that RED’s Canadian techno-math-brainbox boffin Graeme Nattress was quietly demonstrating in a dark corner… 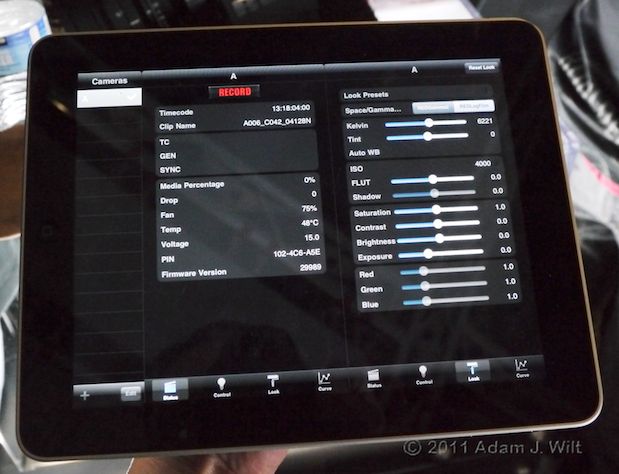 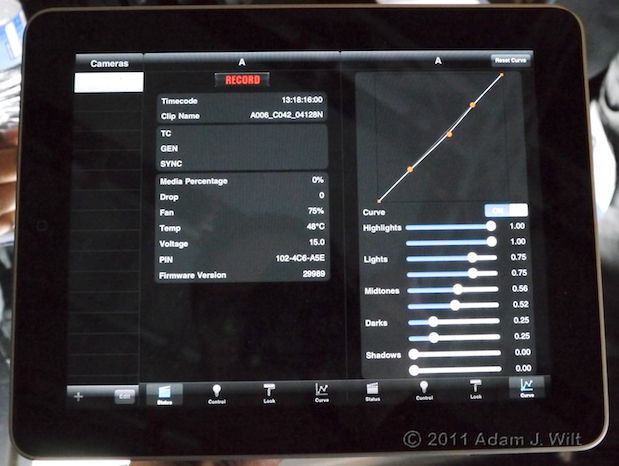 You can even adjust curves, RED Alert! style.

OK, we’ve seen this before, but it’s a real, shipping camera now. Ikonoskop is a Swedish company founded by two filmmakers, and the A-cam dII breaks every freakin’ rule in the book:

• It’s a digital cine camera first and foremost, with no ENG camcorder attributes whatsoever—yet it shoots 1080p on an unfashionably small 16mm-sized sensor.

• It records uncompressed raw HD to a memory pack, as CinemaDNG frames. That’s it: no ProRes, no DNxHD, no XDCAM, no HDCAM, No DVCPRO, no nothing. Just uncompressed.

• Some cameras have handgrips; some need them added. The A-cam dII is its handgrip: you wrap your hand around the skinny bit next the the eyepiece, turn your head slightly sideways, and mash the camera up to your head like a big telephone handset. Seriously. 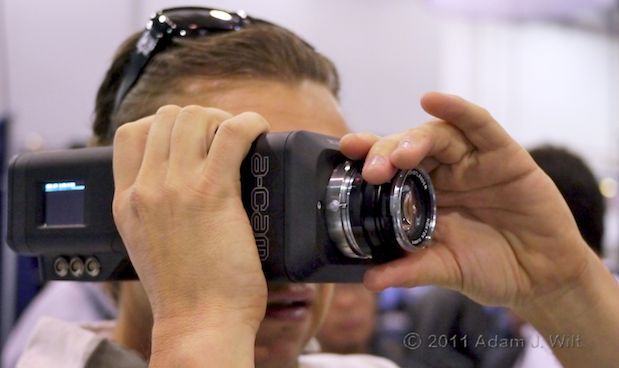 With your head turned sideways to peer into the EVF emerging from the middle of the body, your left eye now has a clear view straight ahead, with equal peripheral vision to both the left and the right. The more firmly you mash the camera against your head, the more stable it is.

• In every other way, the A-cam dII is like no other camera you’ve ever seen. Hey, guys, think the FS100 is “different”? You ain’t seen different ’til you’ve seen Ikonoskop’s cameras!

That little screen at the rear is the director’s monitor!

There’s a start/stop trigger, and a small control wheel just behind the 1/4″ and 3/8″ accessory mounts. The spring-loaded wheel, flicked in one direction, magnifies the VGA-resolution EVF for pixel-for-pixel focus assist. Flicked the other way, it toggles an exposure histogram overlay. 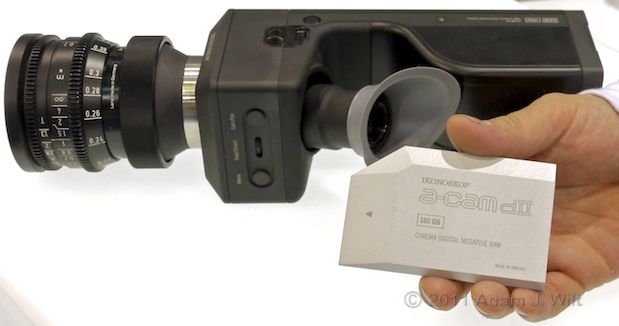 The A-cam dII records up to 32 minutes of uncompressed HD on this 160GB flash mag.

The flash mag and a Sony F770 battery load through the rear panel. 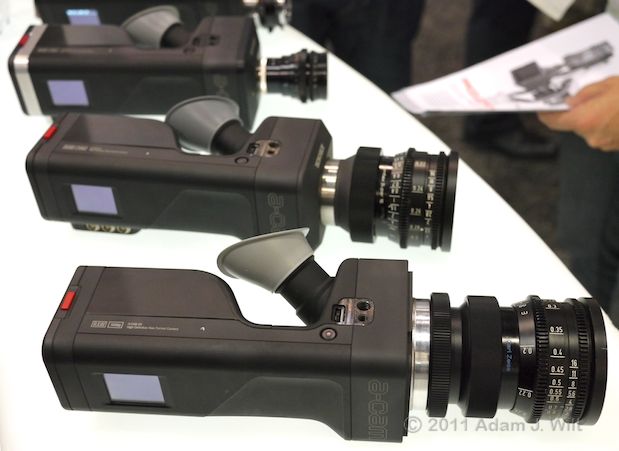 Ikonoskops are available with PL, M, C, or interchangeable mounts. 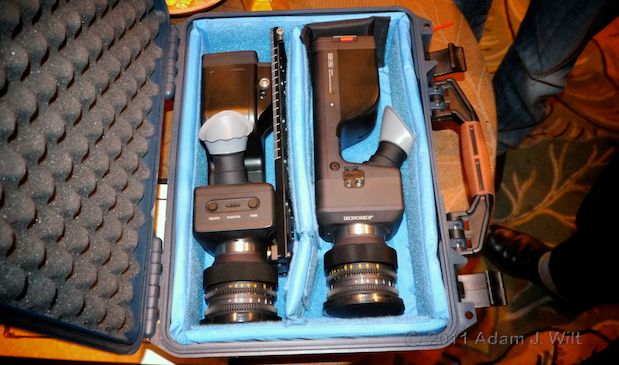 Two A-cam dIIs in a case at the CML party.

It’s a sweet little camera (and reasonably affordable at €6950, or about US$10,300). Interchangeable lenses and uncompressed recording in a body carrying no design baggage from either the video or film worlds: it’s a compact digital cine camera created by filmmakers for filmmakers. I can’t wait to see what people will do with it.

In March 2010 Sony flew me to New York to participate in a camera-design focus group. Sony paid for hotel, plane fare and a dinner; I was responsible for other transport and meal expenses. No other compensation was made for my time, and Sony has not offered any sort of payment or other consideration for reviewing the FS100 favorably. Whether my peripheral involvement in its design gives me additional insight into it, and/or biases me to see it less critically than I should, is something the careful reader will have to consider.