A quick peek at some of the stuff on Sony’s stand… and new lenses, too. 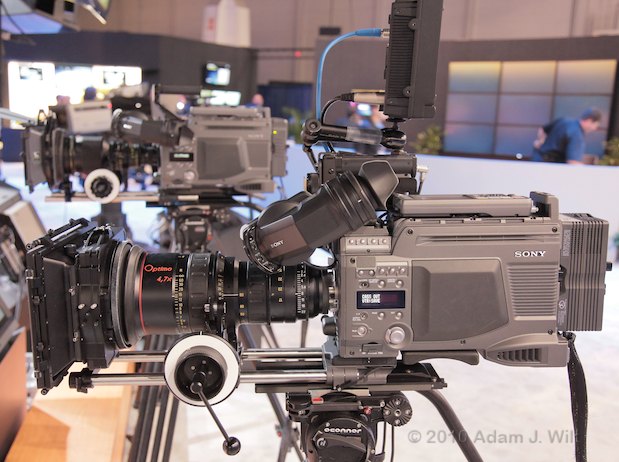 I arrived in Las Vegas late on Sunday, and Sony’s Juan Martinez invited me into the Sony booth for a quick look at the goodies.

The SRW-900, Sony’s shoulder-mount HDCAM-SR camcorder, is here in both its current configuration with 2/3″ CCDs as well as its new, optional setup using the single 35mm-size sensor from the F35 and a PL lens mount. 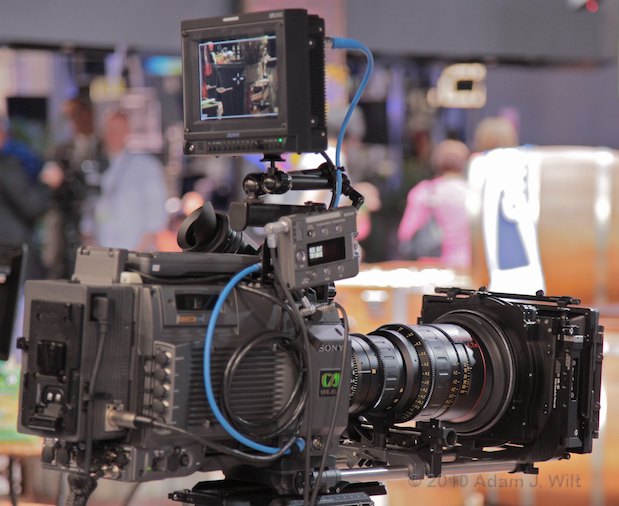 There will also be the option to replace the tape drive with a solid-state recorder, as discussed at the HPA Tech Retreat.

Sony is showing the SRW-5800/2 recorder. Its Gigabit network card has its own web interface; you can log into it and set up data transfers of HDCAM-SR clips as MXF-wrapped files to and from connected computers; the system uses the telefile clip metadata, so you can browse clips through the web interface and set up batch-transfer lists. The VTR uses a large buffer memory and has enough smarts to handle non-realtime transfer, in cases where network congestion or slow disks prevent full-speed operations. 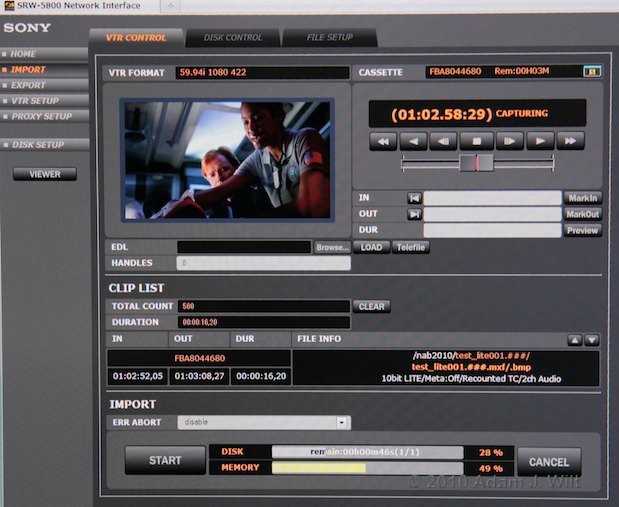 Once on the computer, clips may be viewed onscreen in a viewer application, or sent to a 3rd party I/O card (like the Blackmagic Design card in Sony’s demo computer) for display on a proper 10-bit monitor. This frees up the VTR from QC and logging duties, so one SRW-5800/2 can be used as a centralized ingest device

Sony is also making a software SR codec available so that SR clips may be used natively in editing. Sony Vegas 9 was shown playing back up to four streams of SR data in real time. 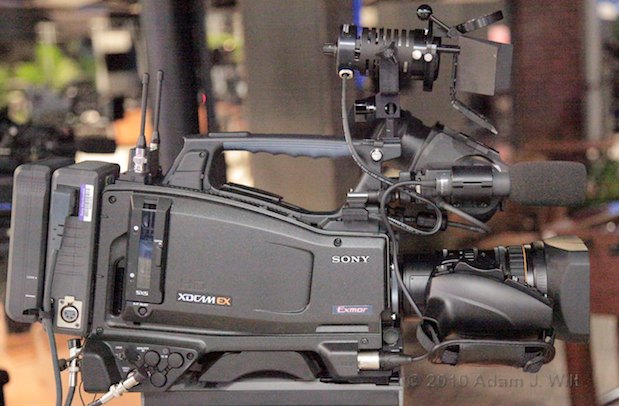 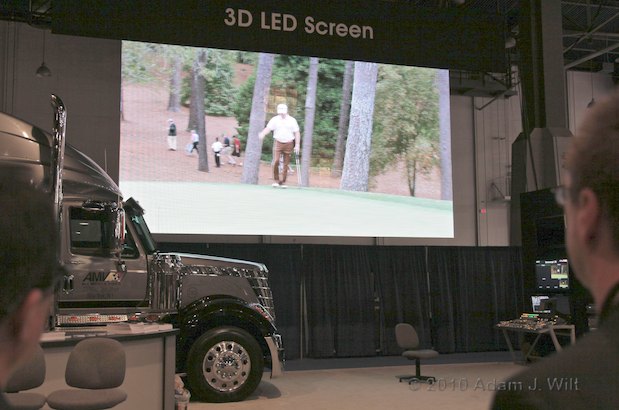 3D is one of the big stories at NAB this year—and Sony may have the biggest screen to tell that story. This massive LED array, suspended in space, uses line-interleaved 3D with polarization (on a smaller display this is often called “micropolarized” but in this screen each scanline so tall that “micro” seems inappropriate): 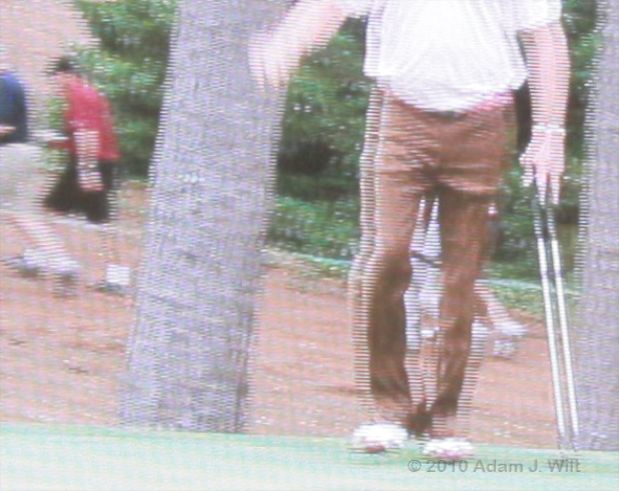 Detail from the photo above showing the line-interleaved 3D.

Sony handed out RealD passive glasses to view the screen with. I’m not sure how well this will play in stadiums, billboards, and other places where massive LED screens are used, but it was fascinating to see: with the screen suspended in free space, with no surround and no wall immediately behind it, the 3D images seemed to float in the air, and their interplay with the 3D-ness of the real world was much different from a 3D image displayed against a flat surface and constrained with a hard surround. It was more like looking at a window into an alternate reality than looking at 3D on a screen.

But that wasn’t the display that really got my attention. Instead, it was the diminutive 7.4-inch PVM 740 OLED monitor: 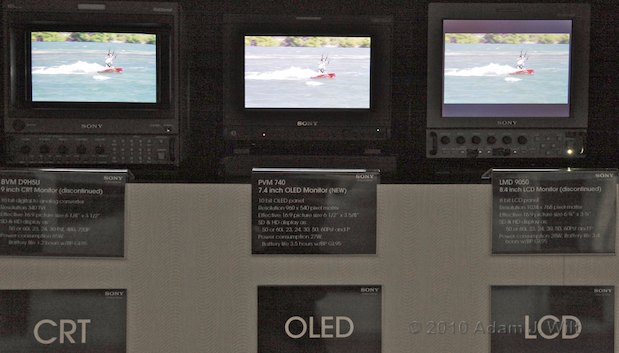 PVM 740 compared to a BVM series CRT and an LMD series LCD.

This little monitor uses a quarter-res (960×540) OLED display. Like a CRT, its viewing angle is hemispheric (if you can see the image at all, its colors and tonal scale will be undistorted), and its black levels are just as good—better, even, since there’s no glow and diffusion of light areas into adjacent dark areas.

Viewed from below: CRT and OLED are fine; the LCD’s tonal scale is whacked and blacks are light gray.

Unlike the CRT, the OLED monitor draw less than 1/3 the power, and it’s said to be daylight-viewable. I took my DVInfo.net Utility Pen (given to me last year at NAB by Chris Hurd in a secret ceremony), which has a super-bright white LED in its cap, and shined it directly on the face of all three monitors. The CRT was completely washed out, and the LCD was severely compromised. The OLED monitor looked pretty good by comparison; it retained a lot of contrast.

The OLEDs are of a new “top emissive” design (similar in concept to Sony’s Exmor-R CMOS sensors, only as light emitters instead of light collectors: the glowing bit is on the top layer of the package, not on a layer buried beneath driver circuitry and other such gumpf), which I am told allows for high brightness, daylight-readability, and long life: this OLED display is said to have a useful life greater than that of a CRT!

I half-joked that this was now the world’s smallest color-grading monitor. Sony’s Gary Mandle demurred, saying that Sony didn’t quite have the color dialed in as precisely as they’d like for critical grading applications: “We’re still learning about OLEDs.” This monitor is shipping now; list price is around $3800.

If you’ve ever seen the results of a Summilux on a still camera—sharpSharpSharpSharp!—you’ll be interested in these puppies: titanium-wrapped hunks of Leitz lens goodness.

I’m attending NAB 2010 on a press pass, which saves me the registration fee or the bother of using one of the many free registration codes offered by vendors. I’m paying for my own transport, meals, and hotel.

No material connection exists between myself and the National Association of Broadcasters or the various exhibitors I’ll be visiting (except as noted in my articles, when and if necessary); aside from the press pass, NAB has not influenced me with any compensation to encourage favorable coverage.