There are a million NAB parties in Vegas. This is the story of one of them. 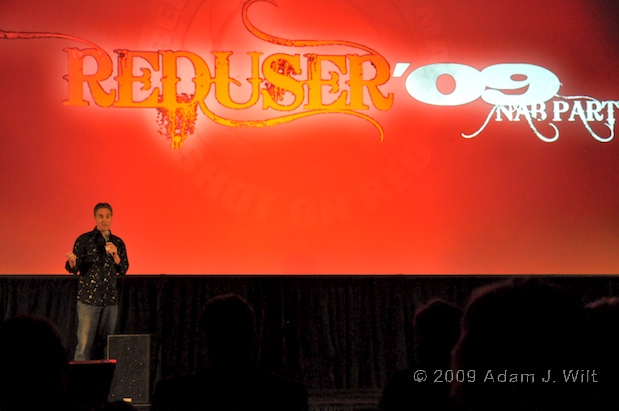 Wednesday evening, following a two-hour Scratch demo (about which I’ll have more to say in an NAB wrap-up article), I journeyed out to the Rio Hotel for the RedUser NAB party, organized by Steve Sherrick of Obscure Knowledge. I wasn’t sure what to expect; I worried that I might be surrounded by fervent fanboys, who would rip me limb from limb when they discerned who I was (while I have sipped at the Kool-Aid™, I am not fully “of The Body”, grin).

I needn’t have feared: there were True Believers and Just Plain Folks in equal number, and nobody tore any limbs off of anybody.

The event actually started at 3pm, and ran to 11pm or so, with presentations every half hour. The party occupied two large ballrooms at the Rio Conference Center; one was set up as a theater with 4K projection for presentations and screenings, while the other had food islands and a bar in the middle and vendors set up along the walls, demoing various RED-related products.

In keeping with Mr. Jannard’s carnivorous reputation, the buffet tables groaned under three different kinds of mini-cheeseburgers, potato skins stuffed with cheese and bacon, and a do-it-yourself hot dog station (your correspondent, being a timorous vegetarian, assembled a pickle relish, spring onion, and mustard sandwich on a hot dog roll).

RED, of course, had its own sizable display; the Red Tent may have been missing from the show floor, but the RED Team was there in force, with mercurial Mr. Jannard, ever-ebullient “RED Ted” Schilowitz, quiet Canadian brainbox Graeme Nattress, and many others circulating through the crowds and manning the displays. A black-clad theater at the back reportedly showed off the new prime lenses on a projector, though I didn’t wait on line to see the presentation myself. 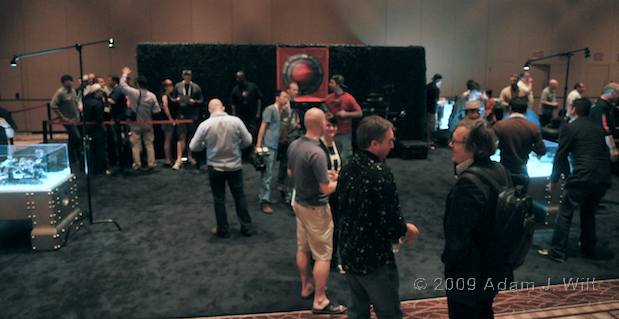 As in the Red Tents, there were several showcases holding conceptual models of upcoming products, plus one with several of the final pre-production RED Prime lenses (during NAB, RED announced the availability of the primes on the RED Store).

These primes were said to be in near-final form, and only betrayed their pre-production status by a lack of final lubrication on the iris and focus mechanisms (though the two samples I handled felt smooth and perfectly usable), and engravings near the aperture scale saying, “Tested T1.8”. While the primes in the set (25mm, 35mm, 50mm, 85mm, and 100mm) were originally said to be T1.9, and the large embossings on the prototypes reflect that, the website now indicates the shipping lenses will be T1.8 (except for the T2.9 300mm, sold separately from the prime set). 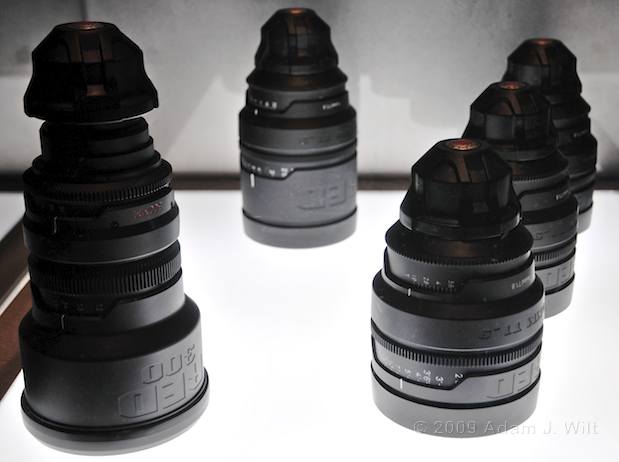 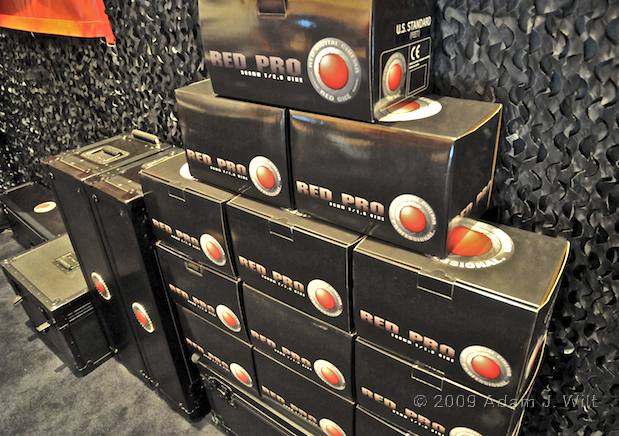 Prime lens boxes. The road cases aren’t products (yet), just “some ideas we’ve been kicking around for lens cases.”

The other showcases held machine-shop mockups of concept cameras, as a physical rebuke to those who say that all those whacky designs only exist as 3D computer models… 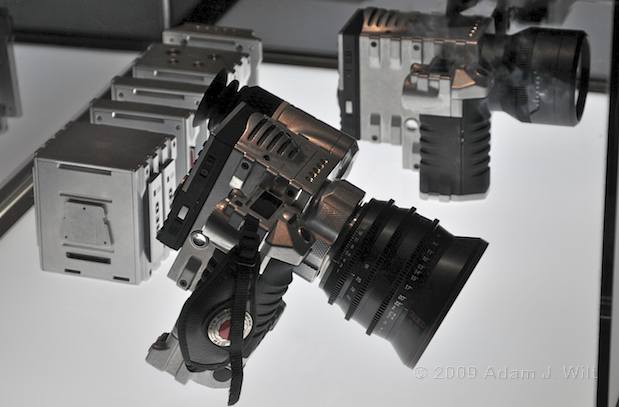 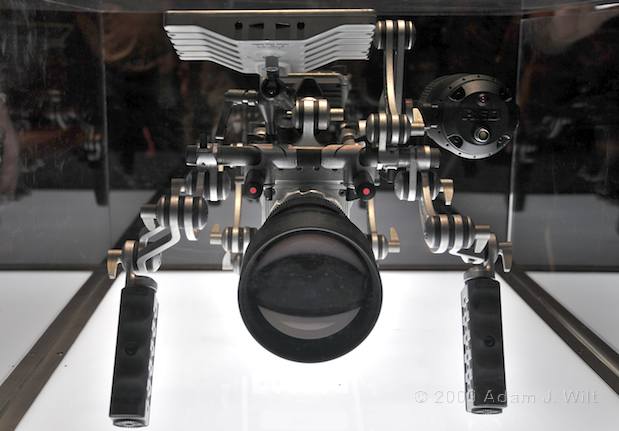 Front view of an aggressive Epic. 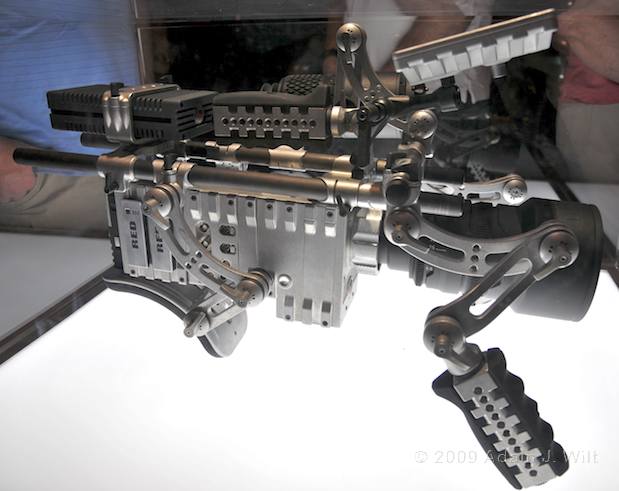 Side view of an Epic with camera head, I/O module, and battery module. Dig those articulating arms for the grips and shoulder pad. 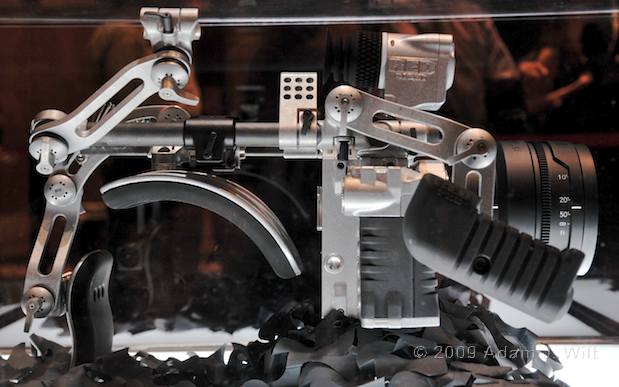 Lightweight configuration for a shoulder-cam.

Next: cool 3rd-party tools, and what transpired in the presentation room…

The GearNex folks were there with their $4000 (NAB price) to $6000 (regular price) gear heads [side note: for an example of how not to design a website, turn off Flash (In Safari, disable plug-ins) and visit http://www.gearnex.com/. “Fail” is indeed the word!] 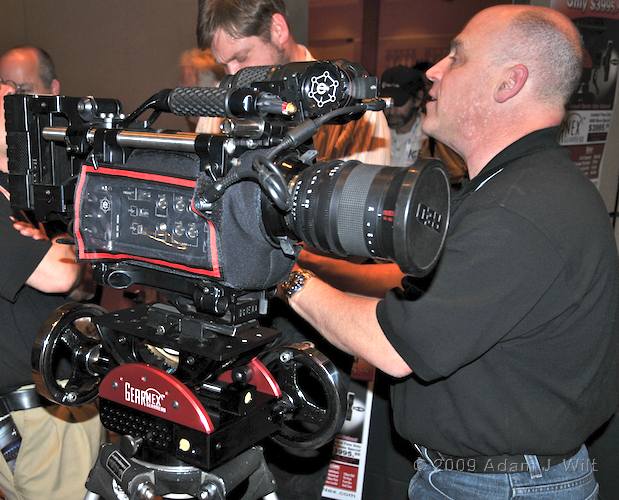 A RED ONE on a GearNex gear head. 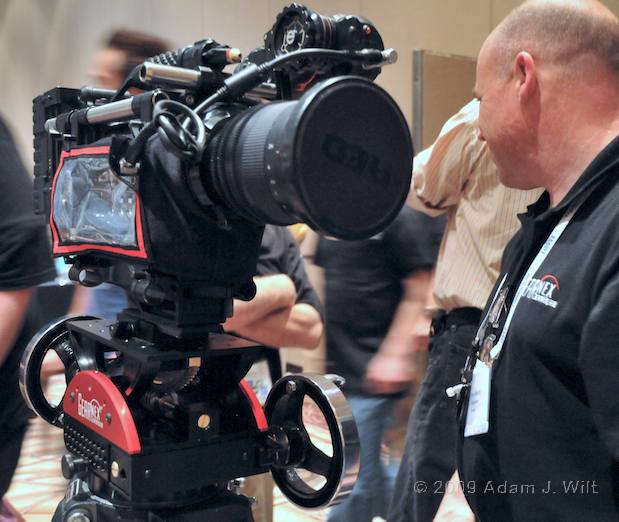 The same RED ONE on the same GearNex gear head.

CMOCOS had what was quite possibly the coolest-looking thing at the whole show: a German, 7-axis, carbon-fiber robot arm adapted for cine motion control work. The image isn’t detailed enough to show it, but this arm was finished in pearlescent tangerine metalflake paint. When you have one of these babies on your sticks (it appears to have a Mitchell base), any other fluid or gear head seems like yesterday’s news, eh? 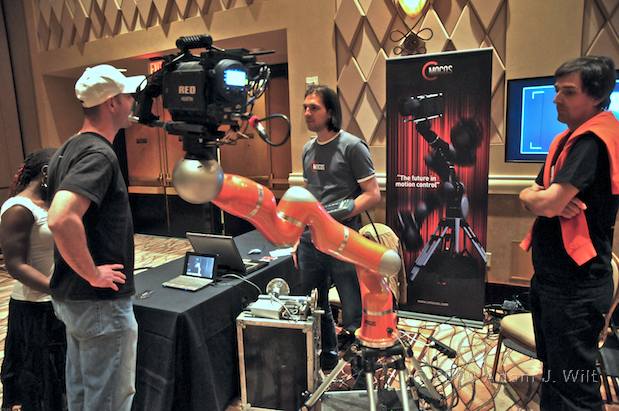 Additionally, Zeiss was showing off their line of lenses, including the Compact Primes; 1 Beyond demoed their ruggedized data wrangling stations; Gamma & Density showed off their 3cP location grading and color control system; and other vendors strutted their stuff—I apologize for not having the full list.

In the theater, various folks showed off post workflows for data wrangling (1 Beyond), editing (Avid, FCP, and Adobe), and grading RED footage (Iridas and Assimilate). In a welcome break from the usual product pitches, those talks that I saw were driven as much by actual users as by vendors, so there was at least a modicum of real-world sanity-checking involved.

RED Ted then ran two RED demo reels, the 2009 version followed by the 2008 version. Only after the reels had run did Ted reveal that while the 2009 show played from an uncompressed 4K source (that must have involved many dozens of fast drives!), the 2008 reel screened from a prototype RED RAY player with a data rate of only 10 Megabit/sec—that’s just 40% the data rate of standard-def DV.

Now, I was seated far enough back that the screen subtended an arc such that I could resolve somewhere between standard-def and 720p levels of detail, and the demo reel was all fast cuts of flashy stuff with hard-driving music (and I’d averaged four hours of sleep for each of the preceding three nights), so it wasn’t exactly an optimal setup for critical evaluation of picture quality. Still, from where I sat, it looked pretty good. It will be most interesting to see how RED RAY develops, as currently the distribution of 4K content (other than via stacks of hard disks) is a rather gnarly problem.

Ted also announced REDucation—RED-sponsored and endorsed training courses for RED production and post. Each course runs 3 days and costs US$1400 (or $2500 for both courses at once). Check out the about page; might be worth looking into if you need to get up to speed.

After the demo, the raffle: as the raffle at the SuperMeet the night before reportedly ran an hour and a half, and all I’d had to eat was relish-on-a-bun, I dragged myself off, first to a proper dinner, then to bed.

If you clicked on the SuperMeet link, you might have noticed the “In Loving Memory” picture of Michael Vitti. Michael was a New York-based Final Cut Pro user and community leader, an energetic and friendly fellow I had the privilege and pleasure of corresponding with over the years and meeting at trade shows in NYC. He died suddenly of a heart attack while at NAB. He will be missed.