One thing I noticed when walking the South Hall of the 2013 NAB show was there are quite a new more PCs in the various booths running various software demos. There were also quite a new vendors offering fast, customizable PC workstations. One of those vendors is ProMAX and their very MacPro looking machines are called the ProMAX ONE and One+. I loved the description of the machine from the ProMAX rep I talked to: It’s like a “higher end MacPro … it doesn’t run OSX.” 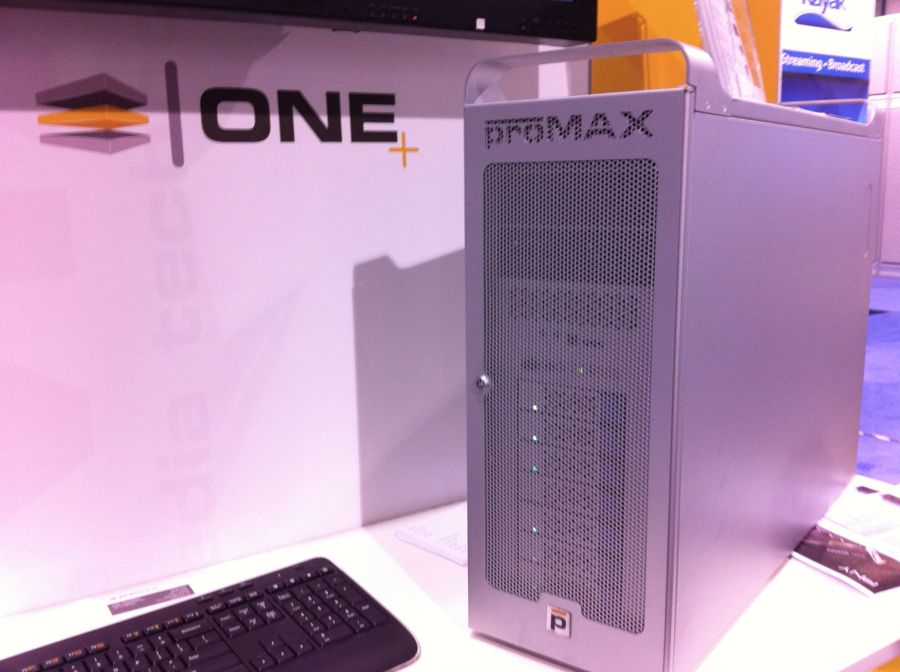 All of these PCs on the show floor were undoubtedly a result of the uncertainty many in the post-production community is feeling over the current state of Apple’s MacPro. It has been years since the current MacPro had any significant update and while we’ve been told Apple is going to bring us some kind of new pro machine in 2013 no one has any idea what that might be. Conversations with a number of these vendors as well as discussion among other editors at the show hinted that more folks than ever are considering a move to the PC or have already made the jump. Since both Avid Media Composer and the Adobe CS Suite are cross-platform it’s not a big change when you’re in the application. It’s all that other stuff we do outside of the NLEs that worry me.

But back to the ProMAX ONE. 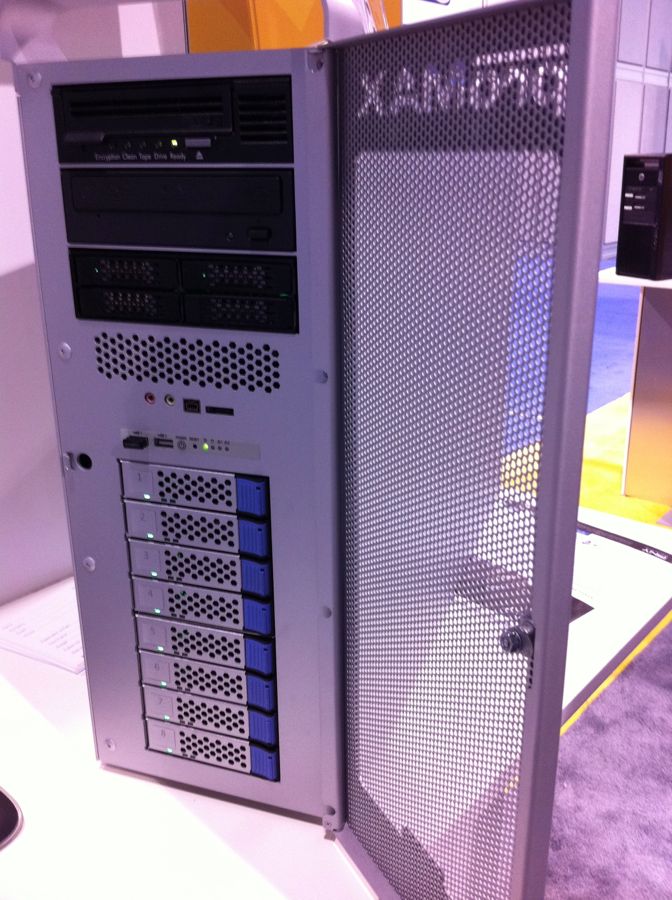 A full RAID built into the chassis means these really are an all-in-one solution … expect for the monitor that is.

These machines were quite impressive beasts nearing the size of a MacPro and larger. The handles built into the metal case looks a lot like the MacPro. Swing open the locking door on the front and you’re greeted with any number of options in the highly configurable unit. I keyed in on the 6 (or 8 on the ONE+) hard drives in the bottom that deliver up to 1,500 MB/second of internal RAID storage. Capacity goes up to 32 TB so it really could be an all-in-one machine. 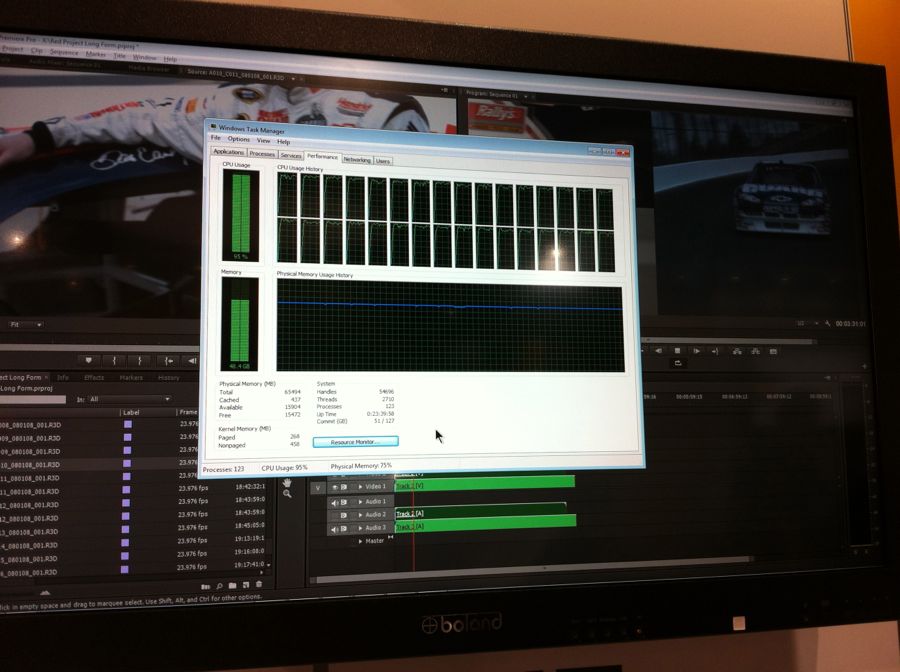 With two CPUS (that’s 16 cores and 32 threads of power) out of an Intel Xeon E5 chip the ProMAX ONE pumps out some serious horsepower.

Adding to everything else you can put in a ProMAX ONE there’s options for an LTO–5 or 6 tape drive. If you shoot with SxS, P2 or CF cards then an option built-in card reader might be something you prefer. And a DVD or Blu-ray burner could go in there as well. 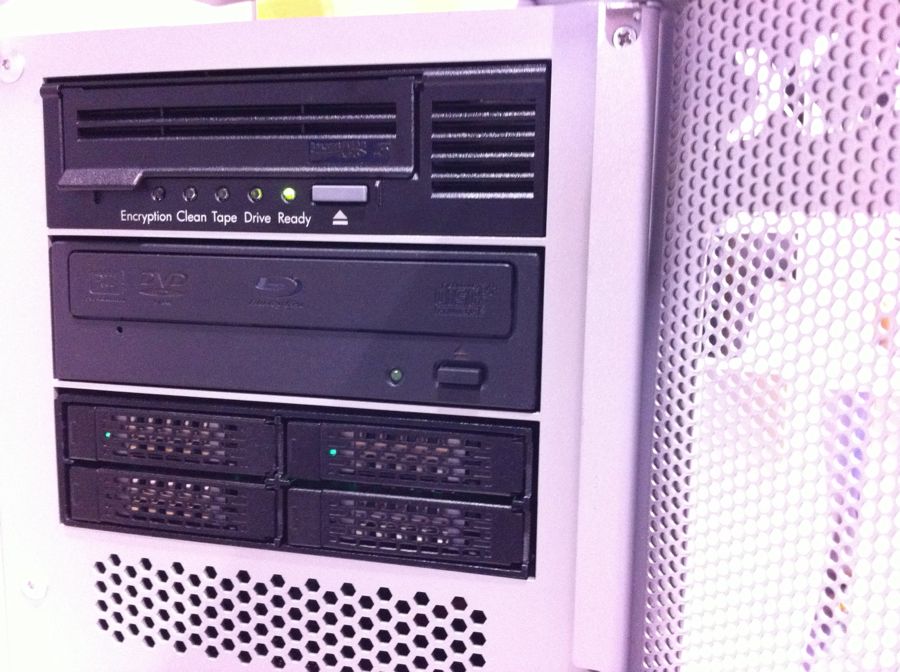 There it is: 4 boot drives, a Blu-ray burner and an LTO tape drive installed in the ProMAX ONE.

One thing I noticed on the spec sheet was a mention of 4 boot drives. The specs lay it out well in that you could have a dedicated Avid Media Composer boot drive, another optimized for Resolve and then a backup for both of those. That should have your ability to boot up covered in the event of a crash. 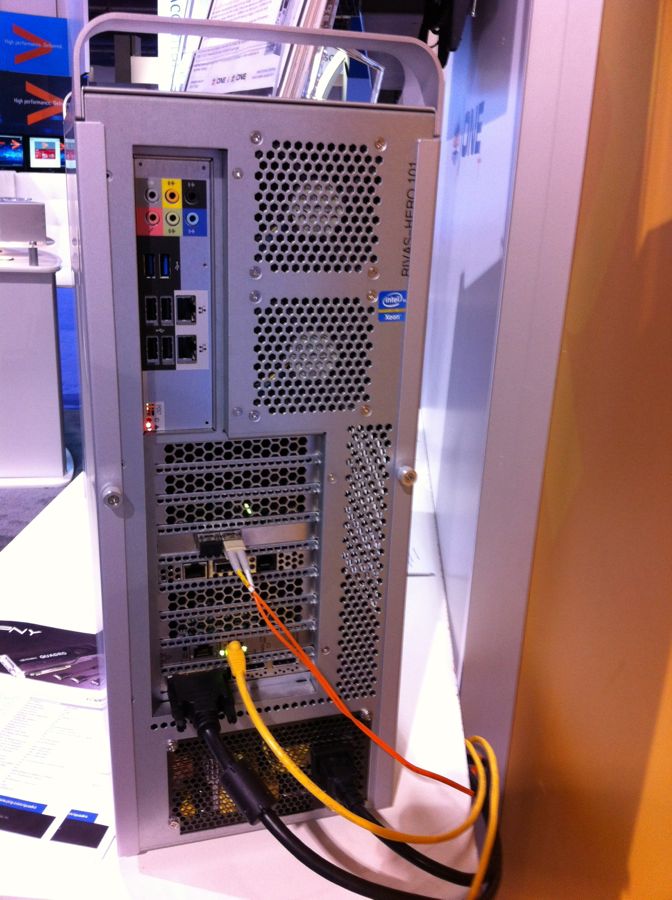 That’s a lot of room for expansion with these things.

And you can’t talk about a workstation / MacPro replacement without mentioning PCI slots. Up to 8 slots means you’ll be able to stuff the ONE and ONE+ with most every card your post-production workflow might need. Add up to 128 gigs of RAM and your After Effects RAM preview will thank you.

There’s lot of connectivity in these machines, including USB, Firewire and eSATA. One thing missing is Thunderbolt and when I asked I was told that was something ProMAX is evaluating as part of that is dependent on Intel.

Cost? While there weren’t any specific numbers that they could give me the ProMax representative said that the ProMAX ONE cost begins at “little more than a high end MacPro.” They’ve had customers configure a machine that costs around $15,000. Now that would be a heck of a workstation. I’m sure they’ll be happy to give you a quote.