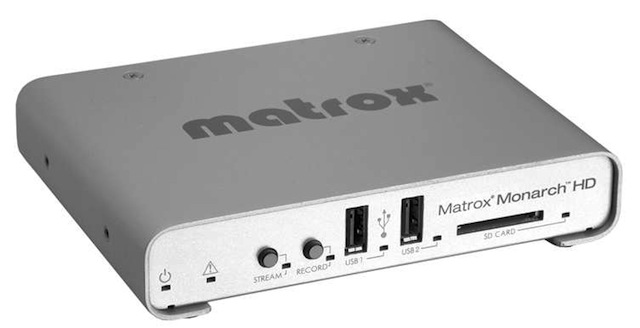 Aimed to connect to existing video mixers (“switchers”) which don’t already have streaming capabilities (or to connect to a single camera), at NAB 2013 Matrox announced and showed a standalone streamer/recorder appliance. When I say standalone, I mean that in normal operation, no computer is required. The first model is called Monarch HD and offers HDMI input/output. I asked several questions during the demo. Ahead are the answers.

Video input of the first Monarch HD is HDMI. There is an HDMI loop-through output. Eight channels of HDMI embedded audio can be processed and output. Two channels of analog audio input with loop are also available via unbalanced 3.5mm (1/8”) stereo jacks at line level.

Matrox fortunately responded that the Monarch HD would have an option to treat malignant PsF HDMI signals (i.e. 25p-over–50i via HDMI, or 29.97p-over–59.94i via HDMI, both with 2:2 pulldown) as PsF, and therefore avoid unnecessary de-interlacing of a progressive signal, which is very bad, as I have covered in several past articles here in ProVideo Coalition magazine. I am awaiting a definite answer as to whether Monarch HD will additionally be able to reverse telecine the more complex 2:3 (aka 3:2) pulldown of 23.976p-over–59.94i. I’ll update this article or publish another one once I have that answer.

Stream one bit rate while recording at another

Matrox confirmed that Monarch HD will be able to record a local file at a different bit rate than the streaming rate, which is good. The local file can be at up to H.264 Blu-ray bit rates.

Recording on SD cards, but what type?

Matrox was only able to confirm Monarch HD’s compatibility with SDHC cards, and could not confirm whether it might also work with the newer SDXC variety at some point in the future. I am also awaiting to hear whether Monarch HD will work with exFAT or HFS+ formatting (rather than the older FAT32 format), and if so, whether (hopefully) Monarch HD will be able to record single files that go beyond 4GB. For those unfamiliar, the older FAT32 limits the largest file size to 4,294,967,295 bytes (4 GB – 1), which means that any recording beyond that point will be forced to use messy sequential files. Modern formatting systems like exFAT and HFS+ alleviate that limitation.

Matrox says that Monarch HD will be available in June 2013 with a price of US$995 (€799, £750) not including local taxes and delivery. I hope to review it soon after its release.