I took a few minutes and actually played with Lightworks Mac!

We’ve already talked about Adobe and their next version of Premiere Pro but the other NLEs on the show floor creating buzz were Avid Media Composer 7 (here’s my take from their press conference) and … wait for it … Lightworks for Mac. That’s just an early alpha of the Lightworks Mac but it was running and I played with it. It’ll be fun to watch how the biz takes to it when the Mac version finally ships which should be later this year.

I was surprised how little Final Cut Pro X I saw on the show floor. There was an install in the CatDV booth I’m told as well as in the Sony booth. In fact I read this about FCPX in the Sony booth:

Apparently Apple DOES have a presence at NAB…albeit a very small one. A solitary iMac with two Apple staffers in the SONY booth.

Showing off native Sony XAVC support inside FCPX in 4K.Meanwhile, Adobe Premiere is everywhere else…

Shane wasn't at the show but was keeping close tabs on it via Twitter. I was sure I had just missed a lot of FCPX on the show floor so I was asking just how much others saw on the floor and the general consensus was that there wasn’t much but that there was a lot of Premiere Pro all over the show floor. That was my experience and that’s what most others seem to say as well. I did see quite a few folks in the NAB newsroom cutting their video interviews on FCPX. It really would be the prefect NLE for that kind of super fast turnaround. Besides FCPX in the newsroom I saw some Premiere Pro. But no FCP7 or Media Composer. Apple was in Vegas and I had a press briefing with them on Sunday morning. There was nothing new to announce as it was more of just an update on the current state of FCPX. They did say we should still expect something in the MacPro world later in the year.

The award for the best swag from the South Hall has to go to Lightworks / Editshare for the light pen: 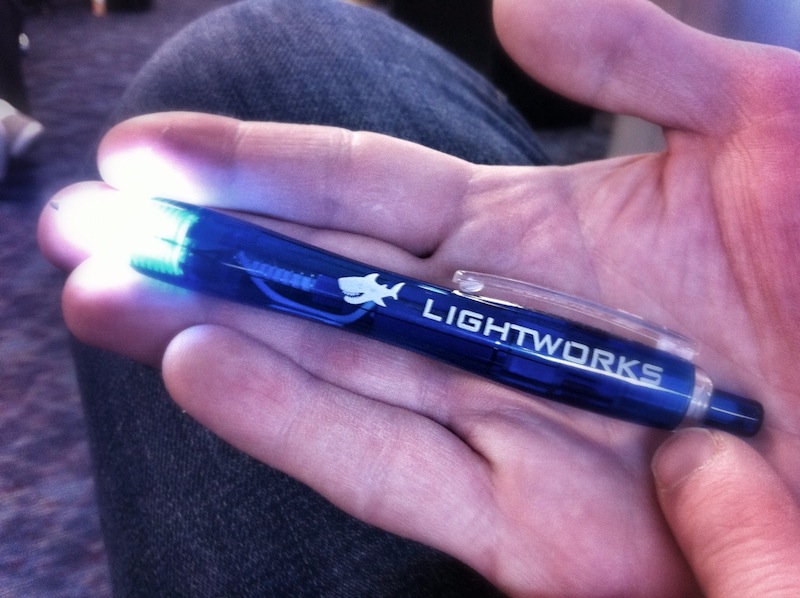 I sure wish I had actually gotten one of these things!