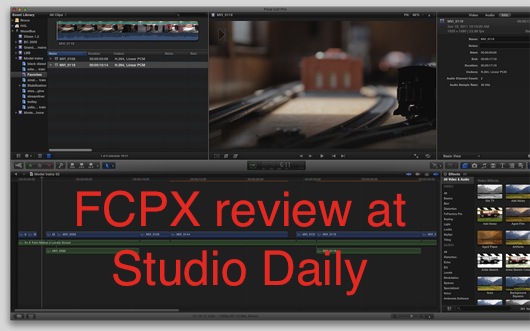 The Editblog has been relatively quiet on the subject of Final Cut Pro X (with the exception of the burning questions and omf export) since its release just a few weeks ago. That’s mainly because I had been busying really kicking the tire on the application (in addition to regular editing work) trying to dig in for the FCPX Hand On Tour webinar and a full review for Studio Daily. That review has just come online so I wanted to point to it here.

As I began working with FCPX I was jotting down notes as I went along. These were notes on things I liked, things I didn’t like, things that were missing and new things that had been added. As I was reviewing those notes for the Studio Daily review I realized they were somewhat disjointed. At times they made perfect sense and other times I couldn’t exactly decipher something that I had written down. The more I thought about the notes the more I realized that’s exactly how I felt about FCPX. It felt disjointed and unfinished but with flashes of some really useful stuff.

And as I was writing the review I realized the review itself was feeling the same way so I tried to leave that feel in the review itself. Who knows how and how fast Apple will improve FCPX (I mean … it can only get better right?) but apparently they are working on just that. Also, who knows exactly how much Apple is really going to dedicate to making it the pro-focused application that FCP7 was. With Apple’s track record of killing off most all pro-video applications I certainly wouldn’t build a business around FCPX. Thankfully there’s a lot of other choices.

I hope the Final Cut Pro X review is helpful.