With the CMT Music Awards airing tonight, we thought you might be interested in learning about how the production team behind these award shows captures, edits, and distributes all the great supplemental content. From red carpet interviews to show promos, the content needs to move quickly and reach a range of media outlets. Here, Jason Pattan, director of content production and technology management for MTV Music Group, talks about how that workflow has evolved to include Adobe Prelude, Adobe Premiere Pro, and MediaSilo, and has improved both accessibility and speed of delivery.

Adobe: What do you do as director of content production and technology management?
Pattan: My title is a really long winded way of saying I’m a workflow guy. I find different tools to make production life easier, try them out, and do real world testing before rolling them out to our general production community at MTV. My job is to figure out what works and what doesn’t before deciding to do a live show with it.

Adobe: How does MTV Music Group work with MediaSilo?
Pattan: We’ve been working with MediaSilo from a review and approval standpoint for a while. We were initially using it for basic production – getting rid of DVDs in our workflow, sending clips out, and getting people working in a collaborative space that they could access anywhere they have an internet connection. During this time, we noticed that there was a lot of functionality available through the MediaSilo platform that we could exploit for different types of production needs. We started wondering how we could work it into our live shows and big events. 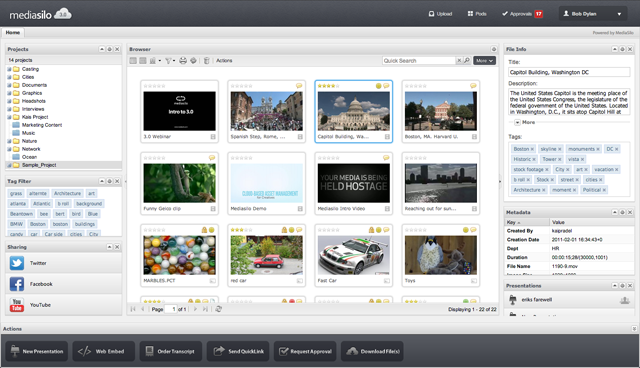 Adobe: Tell us about the live shows and “red carpet workflow” needs.

Pattan: Every quarter we have what we call tentpole events, which may be a large show such as the CMT Music Awards, Video Music Awards, the Woodies, VH1 Divas, and more. We know how to make the TV part of these productions, we’ve been doing it for years, but there is also a lot of ancillary production that goes into those shows and there’s a lot of work we can do to make it better. At all events we have press areas where people go after they’ve won the awards. We do basic interviews and our goal is to use the interviews internally and distribute to press outlets as well.

In the past, our team would shoot a red carpet event, run to the satellite truck to upload the footage, do some editing, and then have the feed grabbed by whoever needed it. This worked well for television programs and broadcasts, however it wasn’t effective in getting content on websites and social channels quickly. We also encountered problems with the uploads not reaching the correct satellite feeds and it could take more than three hours post-show to get two hours of footage uploaded. I’ve spent many nights sitting in a satellite truck at 2 a.m. trying to upload content.

Adobe: Why did you feel you needed to make changes to the red carpet workflow?
Pattan: Our red carpet workflow made sense 10 years ago when we were just sending content to media outlets with the right infrastructure to download it from the satellite. But today, we need to get content to blogs, websites, and other outlets that aren’t going to pay to download the content from the satellite. 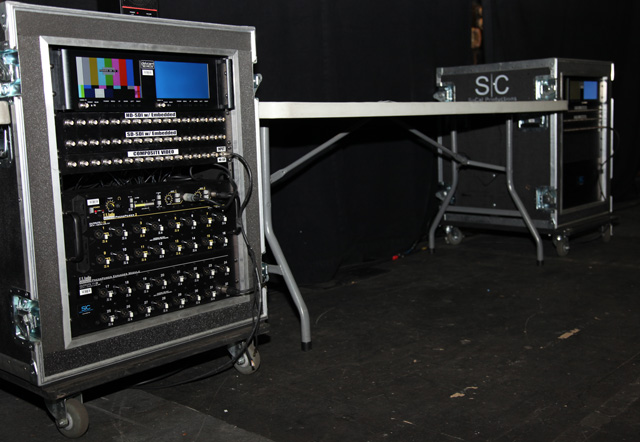 Adobe: How did you start to modify this workflow?
Pattan: We wanted to create a faster, more accessible solution. Our first step in this direction, was capturing the footage digitally, rather than on tape, and using firewire to transfer it to a laptop. We still fed it into the satellite and played it out, but we also posted a proxy on the MediaSilo site. We put the proxies up and embedded a MediaSilo player in the MTV press page. Our audiences could view the content, but they still had to be on the satellite if they wanted to grab the footage. It didn’t solve the problem, but it helped everyone start thinking about online distribution.

Adobe: What was the next step in modernizing your workflow?
Pattan: We still wanted a way to get content out to everyone in a way that didn’t involve sitting in a satellite truck at 2 a.m. Every year, we cover the mtvU Woodie Awards at SXSW. Everyone important to college music is there, and we interview all of them. From there, the team took the content from the file-based camera and fed it into a laptop. We then ingested the clips into Adobe Prelude and entered basic metadata that the team wants on MediaSilo and that also tied back to the internal asset management system. Interviews contained content for a variety of outlets, including press, internal teams, international audiences, etc. The need to deliver content for multiple stakeholders increased the need to move quickly and efficiently in a small mobile location. 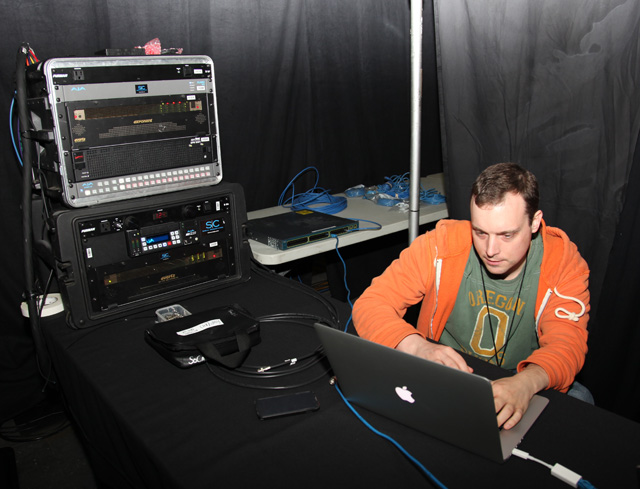 With Adobe Prelude, we were able to make subclips for each stakeholder, tag them appropriately, and transfer the footage to Adobe Premiere Pro. From there, it was edited and uploaded to MediaSilo using Adobe Media Encoder. The MediaSilo content distribution portal is where all of the press outlets and internal teams went to fetch the broadcast-quality content that was ready for distribution. In this way, all departments that weren’t being serviced were now able to secure content. By the time the last interview was done, the upload was completed within 20 minutes.

Adobe: What is the advantage of using Adobe Prelude?
Pattan: Adobe Prelude is a separate logging tool, accessed through Adobe Creative Cloud, with a simple interface for logging quickly without worrying about a full NLE. In Adobe Prelude, we can do a transcode on ingest, make the proxy, rename files, and move them to a different destination. In addition, when content is ingested in Adobe Prelude we can set up metadata profiles with pre-set values. Basic fields correspond to the clips being ingested. When creating subclips, Adobe Prelude gives an entire view of the asset and the subclip within the media file. It also makes it easier to add comments and organize. Once this is done, sending content to Adobe Premiere Pro is a more efficient process.

Adobe: How is the workflow between Adobe and MediaSilo?
Pattan: Adobe Media Encoder allows you to set up an FTP destination, which can be set to MediaSilo's Amazon S3 account, where files are automatically imported along with embedded XMP. MediaSilo accepts direct FTP with embedded metadata, so it is extremely efficient. The XMP support in MediaSilo is key to this workflow. We can capture all metadata at the point of ingest in Prelude, and it is automatically carried through into MediaSilo through the automatic XMP import, and then published on the Portal. It’s great because it reduces the number of times the video and metadata has to be touched, and allows us to decide which items are published to the portal, as well as deciding what information is displayed on the portal, all from the point of ingest.

We used MediaSilo's open API and portal sample to set up our own media portal for distribution and video sharing, internally and externally. In combination with Prelude and XMP support, the full end to end solution provides maximum efficiency from shooting the video to publishing it online. 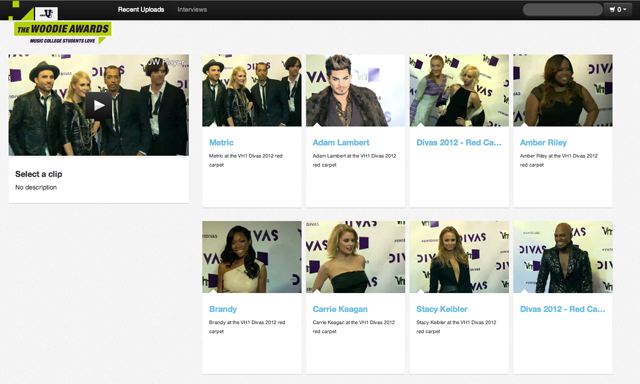 Adobe: What does this new workflow mean to outlets that want this content?
Pattan: This enhanced workflow enabled us to distribute a large amount of content in a very short amount of time. Anyone can access what they need simply by going to the portal and downloading the XDCAM footage. When a show is live to tape, which means it is airing a few days later, making the content available quickly means that people can begin cutting additional promos and do other work that will help drive viewers to the show. From a press perspective, content can appear on third party press sites hours after the show has aired. Previously these outlets would have only been able to include written content, or posted the video interviews days after the event.

What I like most is that I can show up at an event with just hand-luggage, instead of a satellite truck. Time from red carpet to air is minimized, and labor and manual steps are minimized. Plus, with the time I saved, I got to go to the SXSW after party! 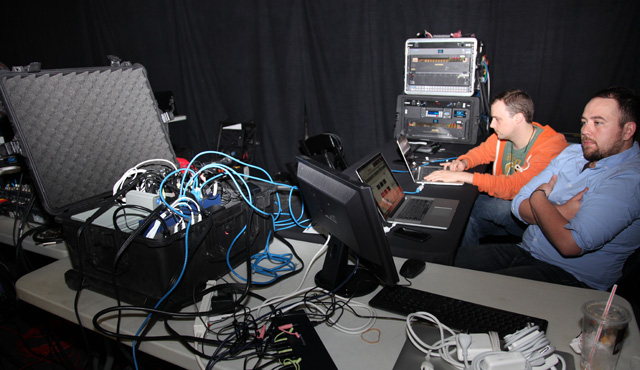 Adobe: What are the future plans?
Pattan: This new workflow has really changed the way we work with these events. What started out as a trial program has been proven and is now our standard workflow and the one we’ll be using for the CMT Music Awards. End users now expect to receive a link they can use to download content. We have plans to enhance the workflow with more search functionality and more detail.

Right now, the audience for the portal is primarily Viacom's press outlet partners. That said, there are plans to grow this solution into a lightweight dailies solution, and to grow the audience of the portal to internal and external on-air distribution channels.