In the lead up to the Sundance Film Festival we had the good fortune to talk with a number of creative professionals involved in creating some of the great films premiering in Park City. From animated and live action shorts to feature-length documentaries and dramatic premieres, these films display a dizzying range of creativity and talent, as well as inspiring uses of motion graphics and visual effects. Me + Her, Hits, and The End of Eating Everything are three films in which Adobe After Effects played an important role.

Me + Her
Joseph Oxford started making Me + Her in 2009 when he was working as a production assistant. After creating characters from some pieces of cardboard, he started writing a script to tell their story. He developed the script and created the characters and set pieces by hand in his spare time. In 2013, he was finally able to shoot the live action short featuring animatronic rod puppetry. 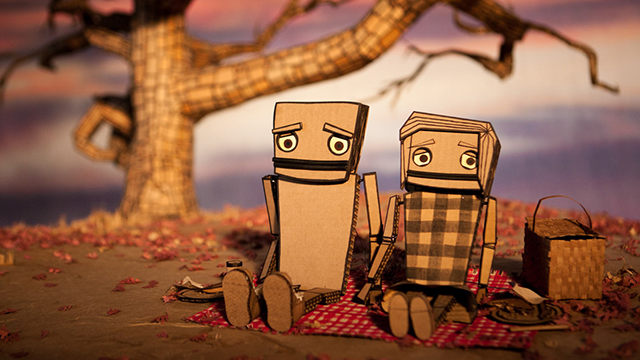 The puppets that appear in the film were designed in Adobe Illustrator and mass produced so duplicates were available if needed. Oxford used Adobe Photoshop Lightroom to develop early color concepts to help determine the visual style before capturing the majority of content in camera.

All visual effects shots went through After Effects at some point, and the time-lapse sequence of the tree growing at the end of the film was the most labor intensive. While some elements were created in Maya, composting the live action and 3D content made it all feel like live action. Oxford and his team used the Roto Brush in After Effects to fill in missing sections of the sky and the 3D Camera Tracker to turn on 200 light bulbs in one scene. Overall, the six page script took 18 days to shoot, resulting in a whimsical short film about love and loss.

Hits
Viewers who attend the screening of Hits aren’t expecting to be wowed by visual effects. In fact, most would never guess that all of the YouTube screens that feature prominently in the film were built using After Effects. The production studio Final Cut worked on both editing and visual effects for the film by Screenwriter and Director David Cross. 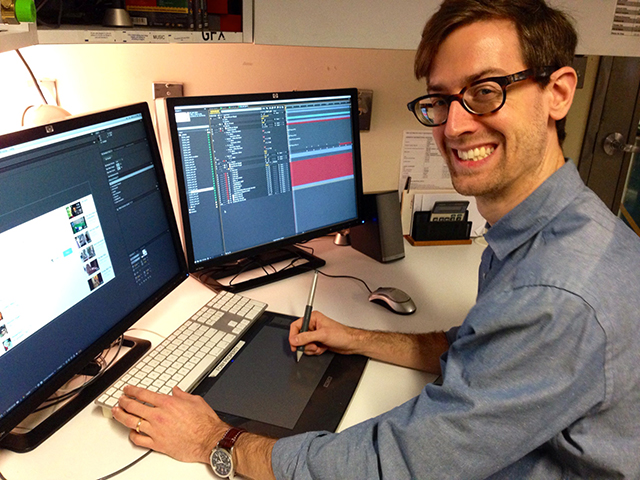 Phil Brooks, a graphics and visual effects artist with Final Cut, was given free rein to recreate the YouTube site so he would have more control over the animation and camera moves. First, he used Illustrator to rebuild the user interfaces and buttons as vector graphics so they could scale as needed for shots. The screens were then taken into After Effects, where Brooks created most of the layouts and pages.

The magic of Photoshop enabled him to crop, prepare images, and remove people from backgrounds as needed. By creating invisible visual effects, Brooks effectively helped tell the film’s story without stealing the show.

Using Adobe Photoshop, Jutt took existing screenshots from the project and composited textures and colors to adjust the overall feeling. Various elements in the atmosphere, such as smoke and birds, add depth and interest. Jutt rendered one bird, animated it flying and diving, created a loop, and then used Particular in After Effects to create the swarm of birds. Animation techniques were also used to make the tentacle on the creature’s head and the internal organs move, pulsate, and change as she moves and spins. 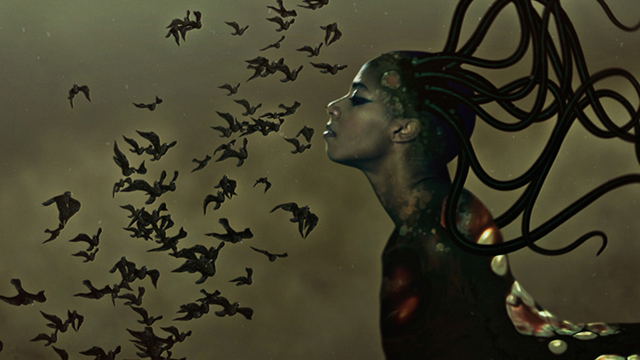 Editing the eight-minute short took eight months. By tackling each challenge individually, from matching the model’s skin tone to mapping the spinning actress to the animated model, Jutt and the small team of editors and animators helped create a film that was true to Mutu’s vision and point of view.