The zombie movie genre, which dates back as far as the 1930s, includes dozens of films from comedies to true horror classics. Insolence Productions, created by Anaïs Bertrand in 2009, combines both comedy and horror in a new film for zombie movie enthusiasts, Super Z. After producing nine award-winning short films, this is the first feature from Insolence Productions. The movie was filmed in the heart of France in September 2013 and directed by Julien Arnaud Tabarly Volte. Producer Laura Townsend worked with Co-producer Emmanuel Pampuri and Paul Ferré, the film’s talented editor, to create the film using an Adobe video workflow. 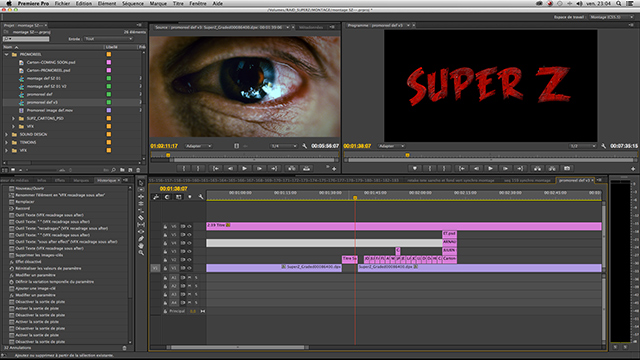 Adobe: How did you get started in the movie industry?
Pampuri: I started as cameraman in 1991 then worked on movie sets with montage, production, and finally in post production. For many years, I worked on the sets of live performances, helping capture the performing arts on video. I started my company, Les Machineurs, in 2006. We specialize mostly in post-production work but also cover the entire filmmaking workflow, from shooting to post production. We provide equipment and expertise, as well as the final output.
Townsend: I’ve been involved in the movie industry for the past eight years. I started as a production assistant then quickly moved up to director of production on short films and then full-length feature films. I started a company three years ago called La Ruche Production and produced Super Z in collaboration with Insolence Productions as a freelancer. I’ve worked with a multitude of production companies and studios on regional full-length feature films and I’m hoping to someday collaborate with U.S. filmmakers.

Adobe: What was your role with the film Super Z?
Pampuri: My role with Super Z is a bit complicated. I’m the workflow glue. I was initially the one that proposed the collaboration and brought the teams together for the realization of this motion picture. My role covered every aspect of the project from shooting to post production, including technical decisions such as equipment and software choices. I was the main coordinator for this film. Les Machineurs was also the digital lab for the film and, being the principle, I had my hands in many different aspects of its realization.
Townsend: I am a producer on the film. I met the directors about 15 years ago and was brought in by the group at Insolence Productions. I shared my role with the company’s founder Anaïs Bertrand. Over the years, I’ve collaborated with the directors and the technical team on a multitude of projects. 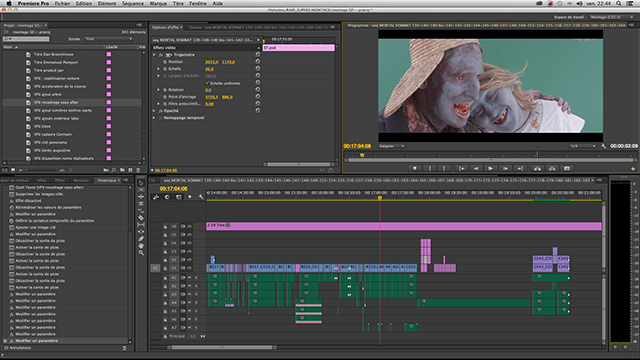 Adobe: Tell us about Super Z.
Townsend: It’s a movie that provoked a high level of interest among industry professionals, actors, and comedians. Given the unusual and unexpected nature of its horror/comedy premise, the projects was a challenge that many of us were eager to take on. For the same reasons, getting the financial support necessary to bring our ideas to life was a big challenge especially here in France. We had to seek help from the local film community, numerous private contributors, and the web, where we raised close to 13,000 Euros on Ulule.com.

A solid partnership with Adobe also helped us tremendously along the way. We ended up launching the project on a relatively small budget and are very happy with how things turned out thanks to Adobe Creative Cloud applications, especially Premiere Pro CC. 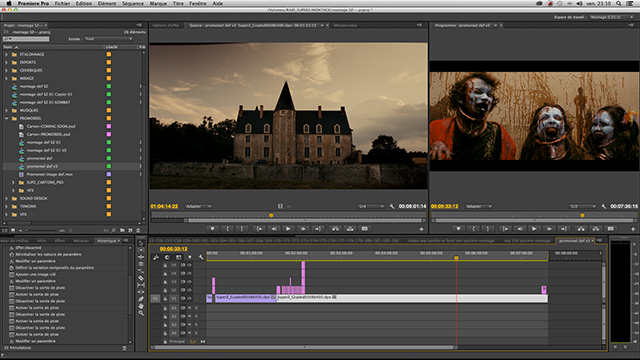 Adobe: How did Adobe Creative Cloud applications help?
Pampuri: The choice to go with Premiere Pro was an easy one to make. The tool made all our lives much easier. The footage was shot with RED cameras so we needed a tool that could support raw R3D file formats and allow us to rapidly upload and work with the files without wasting time formatting or dealing with compatibility issues. This aspect alone was reason enough for us to go with Premiere Pro.

Overall, there were many special effects in the film. We had a separate agency creating the effects and it was my job to help ensure a seamless workflow between all the teams involved. They used After Effects for simple 2D animations. We were able to gather elements from all different sources and easily integrate them into Premiere Pro without wasting any time dealing with compatibly or reformatting issues. Synergy, flexibility, simplicity, and efficiency were the identifiable benefits behind our choice of Adobe Creative Cloud.

Ferré: In the past I used Final Cut Pro and hadn’t used Premiere Pro for a project of this magnitude. With this film, I had Premiere Pro at my disposal and I was impressed with the overall speed of execution. We didn’t have to wait long hours for rendering and were able to use our raw R3D files directly from the cameras. The software itself was very intuitive and user-friendly. Compared to other solutions I’ve used in the past I can say it is very robust and fast. I greatly appreciated how much valuable time we were able to save thanks to Adobe Premiere Pro. 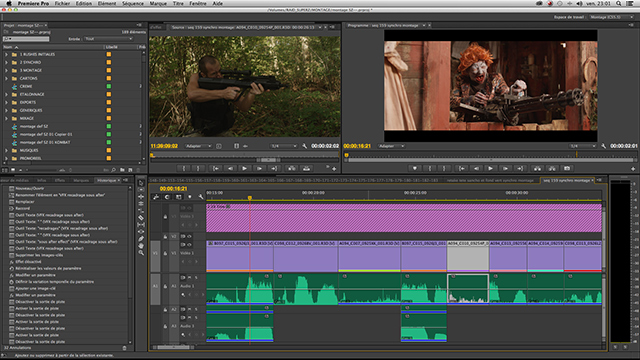 Adobe: Did you discover any new features while using Premiere Pro for the film?
Ferré: Real-time rendering was quite a pleasant surprise for me. When I made edits, I was able to export right away and see the result without having to wait a long time for rendering or reformatting. We can apply effects and filters and visualize the result in real time instead of waiting for hours.

Adobe: Were there any challenges?
Pampuri: At the beginning we had issues finding the right computers along with the appropriate hardware add-ons to tackle such a colossal project. Due to our limited budget, we were using an outdated Mac Pro computer that didn’t allow us to take full advantage of all the features that came with the software. Since we had budget restrictions, we struggled a bit getting the right equipment to do the job. There were issues with audio cards and memory capacity. After we upgraded the equipment and had the right technical infrastructure, everything worked well and we were able to make up for lost time.

Adobe: Can you see yourselves using Adobe video tools in the future?
Pampuri: Les Machineurs is already standardizing on Adobe Creative Cloud. Whether it’s Premiere Pro, After Effects, or Prelude, we appreciate the robustness and efficiency of this set of tools.
Townsend: My team and I were truly impressed with the performance of Adobe Premiere Pro CC. I plan on using it in post-production environments in the future project. My company already uses Adobe Audition for music videos and sound treatment.